Read The Gentleman Has Left the Building Online

The Gentleman Has Left the Building 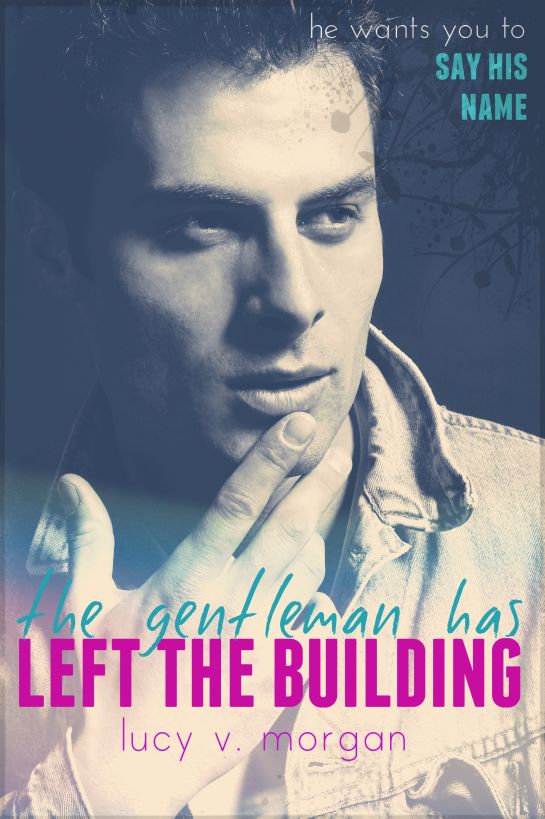 Originally
published under the same title at www.lucyvmorgan.com

This book is a
work of fiction. Any resemblance to places, persons or events is
entirely coincidental and a product of the writer’s
imagination.

This ebook is
licensed for your personal enjoyment only. Please do not re-sell or
distribute it. (Every time you steal an ebook, a puppy dies.
Horribly. It's like something from
SAW)
.

I am the master
of the kitchen. Captain cheese grater. I told Harper when we first
got our apartment that my only goal for the next six months was to
make her horrendously fat (just ‘cause it‘d be funny); so far she
hasn’t succumbed, but there’s a whole pound of bacon in this
carbonara and a litre of ice cream in the deep freeze, so maybe
she’ll magically inflate in twelve hours?

My mum taught
me to cook. She said it was a good way to impress a woman; I think
she was secretly terrified that I’d be single for the rest of my
life and would survive on Doritos dipped in boiled eggs (which is
the food of Gods, by the way). She’s still confused because Harper
and I aren’t a couple--“but you live together all on your own!” she
says--and she doesn’t understand why we don’t just confess our
secret affair and run off into the sunset. The idea of Harper
running anywhere amuses me...but still.

It’d be like
marrying my sister. Well. Harper and I did kiss one rainy, grim
Sunday evening. We were hung-over and dejected from our respective
break-ups--her ex was conveniently having an affair with mine--so
it seemed like it was worth a try. Half way through, I opened my
eyes to find that she was watching
Supernatural
over my
shoulder; her tongue went limp in my mouth and then we were
laughing, the kind that gives you belly cramp and makes your face
crease and ache. When all that subsided, we swore never to speak of
it again. I’ve had more fun being single with Harper than I did in
my entire last relationship, and that’s really not worth trading
in. We're cool advertising execs together, we have our modern,
minimalist little bachelor(ette) pad...it's a good arrangement.

“Rhys?” Harper
called from the hall in that throaty, Alanis Morissette voice of
hers.

The front door
groaned on its hinges and I heard Harper curse as she bent to take
her heels off. Normally, I’d have hopped through and grabbed her
ankles so she fell backwards, but my softly bubbling white sauce
was more important. (That‘s less pathetic than it sounds).

She padded
through and folded her arms. “I forgot the wine.”

“Well, now
you’ve done it. We’ll have to crack open the tequila instead.” I
sighed. “Let me guess-- Nathan blinked three times in four seconds
and you were too busy orgasming to remember?”

“That sounds a
bit painful. But no.” She pulled her long blond hair from her face
and went to stir the carbonara.

I smacked her
hand out of the way. “Bad Harper! Do you know what happens if a
woman touches this pan?”

Her tongue
clicked against her teeth. “It’ll taste good for once?”

“Screw you
then. You’re not having any of it!” Sticky spoon aloft, I chased
her through to the bathroom, where she hid behind the door and
shrieked with laughter.

Twenty minutes
later, we were slobbing out in the lounge with bowls of pasta; me
in my sauce-flecked work shirt and Harper in her fuzzy pyjamas
(this is how I’m certain the girl doesn’t fancy me: nightwear in
hedgehog print).

“Tequila does
not go with smoky bacon and cheese.” She winced.

“But it’s our
mantra, remember?” She leaned over to prod me with her fork. “We
don’t feel sad for not going out on the prowl. We’re secure in
our…”

“Yeah, well.
You’ve been on the prowl all day anyway, you whore. I’ve seen
you.”

Harper
swallowed without chewing properly; she was too busy blushing like
a fourteen-year-old in a sex ed class. We worked together at Knoll
& co, an advertising agency in London, and Harper had been
flirting with Nathan, the new guy, with an embarrassing lack of
subtlety. Which amused me no end.

“Don’t feign
ignorance. It won’t wash with me, missy. I saw you.” My turn to
prod her. “How long have you been flirting with Sir Cockhead of
Brooding?”

“It’s not
flirting.” She shrugged.

“Oh? Is there a
different word for it in Brooding? Is it being a pair of sickening
asshats?”

She grinned at
me over her bowl. “Seriously, it's not flirting. It’s…a game.”

“Do not pass
go, do not collect two hundred spanks?” I teased.

The colour
drained from her face. “Oh God. Did you actually see him spank
me?”

“No.” I
laughed. “But he really did that in the office? Fucking hell, I’ve
got to shake his hand.” Pasta coiled on my fork. “After he’s washed
it, anyway.”

“It’s all part
of it though, Rhys. Like unwritten rules. He chases me like that
and I keep saying no, but we both know that I like it.”

I tapped my
plate. “Let me get this straight. He’s sexually harassing you, and
you
like
it?”

“When you put
it like that, it sounds kind of creepy.” She pouted at me. “Trust
you to suck all the fun out of everything.”

She sat back on
our brown leather sofa and gazed up at me, twirling blond hair
around her finger. “I don’t know, actually. I guess…he likes
pretending to coerce me. Likes the thrill of it.”

“He thinks
you’re going to crack. That’s why he’s pursuing you. In the
meantime, he’s just getting off on harassing you, which is…” I
cleared my throat. “Admirably honest.”

“I want to
crack. Of course I do. But this is nice, Rhys. You know the little
thrills you get from having a crush on somebody? I get them all the
time, and they’re kind of half consummated with the way he plays
with me.” She smiled, bit her lip; tempted, wistful. “It’s a
perfect balance.”

“Only a woman
would refer to a sexless relationship as perfect,” I mumbled.

“You don’t get
it. It’s not sexless. It’s the sexiest thing I’ve ever done.”
Another smile, triumphant now in that way only women are capable
of. “And maybe I will crack, eventually. When the time’s right. I
mean…otherwise one of us will get bored and it’ll all just go to
waste, huh? But until then, while it’s still…swelling…I’m holding
on.”

“Until he gets
blue balls.” I grinned. “Evil Harpie.”

“Anyway, enough
about me. Who have you been lusting over this week?”

Actually, there
had been “a girl” for several weeks, but you can’t mention these
things until you’ve put the feelers out. My feelers went out last
Thursday and they hadn’t come back yet…I'm guessing they found an
abandoned KFC bucket and were probably lying face down in their own
vomit.

“Who?” Harper
squeaked, suddenly alight with intrigue. “Does she work with
us?”

“
You’ll
get blue balls,” she grumbled.

Harper launched
a cushion at me. “Bleugh. No!”

There’s only
one reason why I know what seven AM on a Saturday looks like, and
that’s this one girl. Well. That and Aidan, my mate from
kickboxing; if I don’t join him for a run in the local park three
times a week then he threatens to turn up at my office and do one
of his Broadway dance routines. I wouldn’t put it past the sly
ginger bastard.

“You’re late.”
He snorted at me in disgust.

"You're wearing
a hairband," I shot back.

He pushed the
thick blue bland back into his curly red hair, and wiggled his
eyebrows. "Have to protect the 'fro. Also, you're
late
."

“I’m not late.
I’m…arriving later than normal.” I bent to tighten my laces and the
whole world whooshed forwards. Ugh. “I’m on hangover time.”

“Oh, I see. A
few vodkas and you’re Doctor fucking Who.” He flexed his hands at
me. “I can see it now: gracefully bounding towards your foxeh
laydeh with your stripy scarf billowing behind you in the
breeze--”

“Sod off, will
you? It’s half seven! What are we doing here?” I glanced around at
the deserted park. Hills rolled away from us in fading shades of
green, and tall old trees swelled against the skyline.

“Are you sure
you’re not gay?”

“Whether I like
cock or not is none of your business. Now run ahead of me so I
can--” He gave my arse a sharp once over, “--make sure you keep
up.”

I shook a
feeble fist in the air. “If I wasn’t so afraid of you, I’d still be
in bed,” I said weakly.

“We both know
you’re not here for me, you perv. Quick! On your left, near the
willow tree.”

And there she
was. There
she
was.

We’d named her
Nicole. I don’t know whether you remember those sad nineties
Renault adverts--
Nicole? Papa!
--but like her, she was
youthful and groomed and shiny, with her hair all streaked with
honey and slender little shoulders that lead down to…nnnghh. I
could see the sun refracting off her lip gloss from ten feet away.
I bet she was French, like in the advert. I thought about her
saying my name in that accent all the time…
Rhys
…

“Technically,
we don’t know that she’s not a schoolgirl,” he said dryly.

I wished he’d
shut up and just let me gawp at her. We’d got a nice spot under
some trees where she probably couldn’t see us and her tits were
doing that lovely judder with every skippy step. Bounce and quiver.
Bounce and quiver. Are her nipples were chafing against that tight
vest? Wonder what shape they are…

“Nicole!" Aidan
barked in a comically low voice. "Why you dress like a whore for
running? Why you not go ze gym like respectable femme?” His dirty
old Frenchman accent wobbled into the squeak of a young girl. “But
Papa, ze boys, they stare at me in ze gym! Ze park, it is full of
the beauty of nature, and I exercise in peace. One time, Rosemary
say a weird advertising exec, he stalk me. But she had mouthful of
brie, so maybe I mishear her.”

Soldier Girl by Annie Murray
The Visible World by Mark Slouka
The Reckoning by Thomas, Dan
A Mixed Bag of Blood by Bernstein, David
Apocalypse Atlanta (Book 4): Apocalypse Asylum by Rogers, David
The Auditions by Stacy Gregg
Giacomo Joyce by James Joyce
Fast Buck by James Hadley Chase
What You Can Change . . . And What You Can't*: The Complete Guide to Successful Self-Improvement by Martin E. Seligman
Drunk In Love: An Original Love Story by Tiece
Our partner