Read The Ghost in Me Online

The Ghost in Me 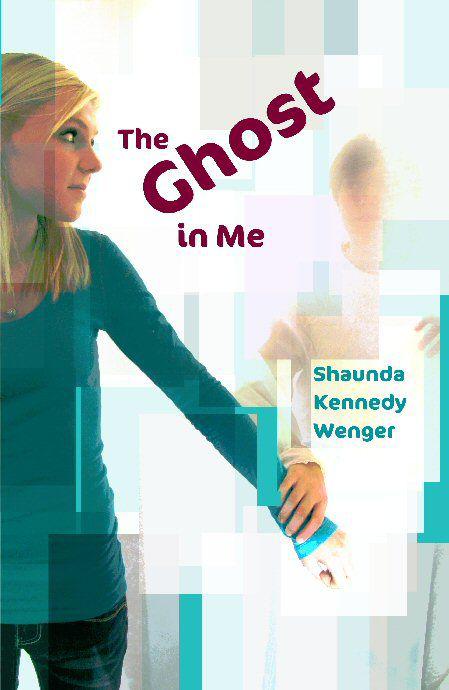 THE GHOST IN ME

Sincere thanks and gratitude are expressed to my family and to early and final readers of this manuscript--Becca Barlow, Sara Olds, Judy Torres, Alane Ferguson, Lori Nawyn, and Rick Walton--your encouragement kept me moving forward.

All rights reserved. No part of this publication may be reproduced or transmitted in any form or by any means, electronic or mechanical, including photocopy, recording, or any information storage and retrieval system, without permission in writing from the author.

This is a work of fiction. All cockroaches, names, characters, places, organizations, and events portrayed in this book are products of the author's imagination. Any resemblance to any organization, event, actual person, or bug, living or dead, is unintentional.

...Visit the author at www.shaundawenger.blogspot.com...

Life is an adventure.

For Nia and her ghostly chair,

and for Joanna, Nathan, and Eric,

Excerpt from
Disasters of a Tween-age Half-Vampire, Half-NOT!

A cockroach can live for eight days without its head.

At least, that's what Duey Williams is saying--or rather, yelling--right into Cam Anree's ear. They're messing around at the front of the bus, acting like seventh-graders--which we no longer are--and blocking kids from getting on with this eight-days-business.

Well. At least if my mother asks what I learned at school today, I'll have something to tell her. That is, if I were interested in telling my mother anything, which I'm not. Especially anything related to him.

Him, being Duey Williams. For one thing, I don't like him.

This, I can honestly say is true, because I make every effort not to.

Yep, as far as I'm concerned, he can take a big dose of ugly. And it'd make my world a whole lot easier if he did. He's way too cute for my own good. I mean, everyone knows you can't crush on your best friend's boyfriend, right? Even if he is an EX? And even if they
are
back to being friends the way EXes try to be?

The whole situation could end up in nothing but a big bowl of awkward.

Generally, I like to avoid awkward. It makes a good rule.

Actually, it's a new rule, thanks to my mother, who needs to get a grip on acceptable dating behavior. Last I checked, dating your daughter's science teacher wasn't part of it.

When Wolford Academy held parent-teacher conferences last week, half-way through mine, Mr. Diggs and my mother actually started flirting with each other.

Basically, I wanted to die.

They wanted a date.

Which meant, I wanted to die again... and become something like Wren.

That's because Wren is a ghost.

She lives with us. Or, maybe I should say,
we live with her
, because she came with the house. Basically, she and I have grown up together.

Or rather,
I've
grown up all of the fourteen years that I've known her, while Wren, on the other hand, has not. She has been and always will be two months past twelve, for whom the rules of life no longer apply--a down-right luxury in my opinion. Wren gets to come and go wherever, whenever, she pleases.

But me? I get to stay stuck with the worst situation on earth--with a mother dating Diggs, unless I can come up with a brilliant plan that will keep Mr. Diggs from ever wanting to see my mother again.... Not such an easy task when I'm constantly distracted by all-things--no-matter-how-disgusting--Duey.

Yes, Duey, an otherwise edible boy with toffee brown hair that gets flipped from his chocolate brown eyes whenever he laughs.

Who can resist toffee and chocolate? Not me. Not anyone. So maybe I shouldn't feel bad about liking the menu.

Roz, my best friend (his EX), is sitting two rows up on the other side of the aisle, getting algebra homework from Cass Barnes. Even though she can't see me, I pretend not to notice when Duey pushes past Cam and jumps into the empty seat behind mine.

It's hard to ignore a hello like that, so I give him half a nod, half a smile, and turn my head to stare at the gray-speckled grime on the window, while trying to focus on the one, last-remaining, menu-burning reason I have for not paying attention to anything else Duey might want to say.

"Eight days!" Roz blurts, while rubbing a nine of clubs on her chin. "Can you believe that?"

We're sitting on the floor of my room playing rummy, and at first, having been completely successful in my Ignore-and-Forget-All-Things-Related-to-Duey plan, I have no idea what she's talking about.

"Yes, the bug thing!" Roz says, rocking from her knees to her toes.

"Completely disgusting." I watch her pick up a red queen and throw down a seven. "Hide your cards, why don't you?"

For people like me, who try hard not to cheat, Roz always makes playing a simple game of rummy down-right frustrating. If she wasn't my best friend, I might be tempted to take better advantage of it.

Well, in a way, I guess I am. There's no way I'm throwing down either of the twos I'm holding. At least, not yet.

Roz smirks and rearranges the cards in her hand, flashing me a Jack of diamonds and two of clubs in the process. I sigh and give my head a shake. Outside of a soccer game, Roz never really plays by the rules. She's more of a take-it-as-it-goes-sort-of-girl, who's never put up a stink about anything.

Anything, that is, except losing Duey.

And her name. It's Rosetta Victoria Lavender Lynnwood. She's already tried to get it legally changed to the one I made up--Roz. But without her parents' approval, she can't. I don't know what they have against it, but they're making her stick with the twelve syllables they gave her until she's eighteen.

Yes, I said that to Wren.
The ghost
.

She's playing cards with us, and it's her turn. I've already drawn her a card, and now she needs to get rid of one she doesn't want--something we've been waiting on for thirty seconds now....

Make that thirty-five, because she's taken time to shoot me a hollow, irritated gaze before tapping the third card from the left. Her cards are in a free-standing card tree that Mom usually uses for holiday photos and letters and stuff, but it also serves as Wren's hands for our game, since she can't hold anything.

"Eight days for what?" she asks, her voice clipped with a strong Irish accent.

I pluck the unwanted seven of spades from the tree and toss it on the pile.

"Nothing," I say, flipping a hand at Roz to keep quiet. Wren can be a pest when she wants to get involved where she doesn't belong, which for a ghost,
and a younger ghost at that
, goes for just about everything.

It's a known fact, at least among the few people that know her:
Wren is a trouble-making pest
.

That's why she's in my room with us--because Mom told me to keep her entertained. With her new clients coming, she couldn't risk Wren getting all weepy and feeling like they needed a hug.

We learned
that
early on.
Don't let Wren hug the guests
. After all, that's how Roz started being able to see her, hear her--from a hug over a scraped knee when she was three--which as Roz grew older, wiser, turned out to be no big deal. Roz likes Wren--at least as much as anyone can like someone who's dead.

But as for the rest of civilization, or in particular, Mom's clients?

Well, they're pretty much in the midst of experiencing death firsthand. And the last thing they want to see when they've come to see Mom about burying their beloved dead, is a ghost. Not even a harmless one like Wren.

"Ya, right. C'mon, now, Myri," Wren says, giving me a squinty look. She isn't a mind-reader, but she knows when I'm not telling the truth.

She also knows when I'm not going to budge. "All right, then, Roz. Y' tell me." Wren shifts closer in Roz's direction. "Y' look ripe enough to bounce out of your skin or something. Eight days for what?"

Roz pushes her dark brown hair back over her shoulder and tips her freckled nose in the air. "Even if Myri would let me tell you," she teases, "I don't think you could handle it. It's a bit more than G-rated material."

"G-rated material! How old would you be thinking I am?" Wren sinks her hands into her hips, where they disappear into the folds of a nightgown that is as gray and washed out as the mist that clings to Ardenport's shores. "I've got more than three hundred years on this blessed earth, and maybe a day or two more."