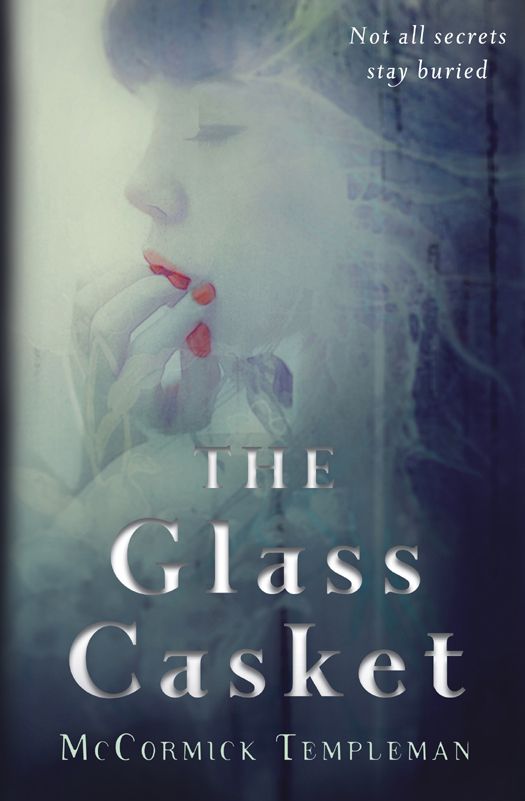 Delacorte Press is a registered trademark and the colophon is a trademark of Random House LLC.

Library of Congress Cataloging-in-Publication Data
Templeman, McCormick.
The glass casket / McCormick Templeman.—First edition.
pages cm
Summary: After the brutal murder of her cousin, everything changes for sixteen-year-old Rowan, who must not only seek the evil forces responsible before they destroy her family and village, but also set aside her studies when she becomes betrothed to her best friend, Tom.
ISBN 978-0-385-74345-7 (hc)—ISBN 978-0-449-81315-7 (ebk)
[1. Fairy tales. 2. Supernatural—Fiction. 3. Murder—Fiction. 4. Community life—Fiction.
5. Witches—Fiction. 6. Love—Fiction.] I. Title.
PZ8.T25Gl 2014
[Fic]—dc23
2013001970

T
O THE WATERS AND THE WILD

F
OR THE WORLD
’
S MORE FULL OF WEEPING THAN YOU CAN UNDERSTAND
.

O
NE BLEAK MORNING
in the eye of winter, five horses and five riders thundered into the remote mountain village of Nag’s End. Without ceremony or respect for local custom, they charged through the square and up the steep alpine trail that lay just beyond. Hazarding the rocky terrain, they weaved their way between snow-shrouded pines, climbing ever higher until they reached the icy plateau of Beggar’s Drift—a place, it was said, that the Goddess had forsaken.

From the window of his father’s tavern, Tom Parstle saw them pass, and although they rode with great speed, he was certain he caught the seal of the king’s guard upon their breastplates. Few people of interest, and surely none so
interesting as the king’s soldiers, had ever passed through Nag’s End, and in their wake, they left an aura of wondrous anticipation. For what could there be in such an isolated part of the forest to attract the attentions of the king?

Tom and his best friend, Rowan, were certain the arrival presaged the beginning of a marvelous adventure, but three days later, when the horses came surging down the mountain, barebacked and petrified, they knew that something had gone terribly wrong.

It was Tom who suggested the search party, and because Nag’s Enders were a noble folk, the kind of people who saw even strangers as their brethren, volunteers gathered in earnest. After bidding farewell to his mother and to Rowan, Tom joined his fellows as they made the trek up to the forsaken place.

The higher they climbed, the more his lungs seemed to resist the harshness of the icy air, and when they neared their destination, Tom marveled at the fierceness of the tumbling snow. If the weather in Beggar’s Drift was this brutal when the village below was calm, what must it have been like in the preceding days, when Nag’s End had been hit with a gale the likes of which they hadn’t seen for nearly a decade?

“It must have been death up here,” his brother, Jude, whispered, as if speaking Tom’s thoughts.

When they reached the plateau, Tom peered through the snowy haze to the bones of the camp stretched out in the distance. There was no movement, no sign of life, and yet Tom felt there was a strange pressure in the atmosphere—
a charged energy that made him feel as if he’d walked onto the scene of a massive celebration only moments after it had suddenly and inexplicably ceased.

As they approached, Tom saw something that astonished him. At the far end of the camp rose an enormous pile of wood, shattered and splintered as if heaved up half-digested from within the bowels of the earth. The monstrosity stood three men high and twenty men wide, and whatever its purpose might have been was lost on Tom.

“What in the name …,” Tom whispered, and started toward it, but then Jude grabbed his arm and pointed toward something in the near distance. One of the tents had been destroyed, a gash torn in its side, its rent fabric snapping in the wind. Upon seeing it, the men froze. Tom’s father, Wilhelm Parstle, held up a hand to the others, but Tom and Jude broke into a run, as is the wont of teenage boys, toward the danger instead of away from it, and the others followed.

Tom reached the tent before his brother did, and when he stepped inside, his heart grew cold. The scene was utterly commonplace, and that in itself was unnerving. A flagon of wine stood on the table next to a half-filled mug of the same. A heavy coat lay on the cot, folded and ready to wear. The side of the tent had been mangled, and snow had swept in through the tear, marking time with its presence, but had it not been for that, Tom might have expected someone to return at any moment, finish his wine, and put on his winter gear before heading out for his day.

Tom jumped when he felt a hand on his shoulder, but he turned to find it was only his brother.

“Over there,” Jude said, pointing to a journal that lay open on the table, a pen set neatly beside it.

Leaning down, Tom brushed the dusting of snow from its pages to find two words scratched below:

Down in the village, Rowan Rose stepped out into the afternoon light. She’d been hard at work on her translations all morning, and she needed to clear her head. Wrapping her cloak around her, she lifted her face to the sky, delighting as the falling snow kissed her cheeks. Nag’s End got its fair share of weather, and while she might enjoy the wildness of summer and the quiet brooding of fall, she preferred the ethereal beauty of winter.

Rowan lived with her father and her housemaid, Emily, at the edge of the forest in a two-story stone cottage. Theirs was the only home in Nag’s End with a gate surrounding it, and a thicket of thorns beyond that. But inside their yard was a beautiful garden, the crowning glory of which were twin rose trees that framed the front door, one bearing red roses, the other white. It was rumored that Rowan’s mother had planted them, but no one could say for certain. Rowan had never known her mother. She’d died in childbirth—taken by the fairies, some used to whisper—but Rowan liked to imagine her mother’s long, smooth fingers moving through the dirt, placing the seeds in the earth and nurturing the sprouts through sapling-hood.

Reaching out to touch the naked branches, she thought
how beautiful they would look when the snow melted and the rich buds burst forth. Lifting her sapphire skirts, she made her way along the garden path and stared out into the forest beyond. A bird lit on the stone wall, and Rowan smiled at its beauty. It was a bluebird—a rare thing in winter, when Nag’s End seemed the exclusive domain of the large black crows that swept through the sky like terrible sirens.

Behind her, the front door opened, and Rowan spun to see her father emerging. Carrying a pile of books close to his chest, he moved briskly, his white-blond hair falling over his eyes. He looked worried, and when he saw his daughter lingering by the wrought-iron gate, he gave a start.

“I thought you were working,” he said, a note of hesitation in his voice. “Glad to see you’re taking the air. The life of the mind can lead to weakness of body.”