The Good Girl's Guide to Murder 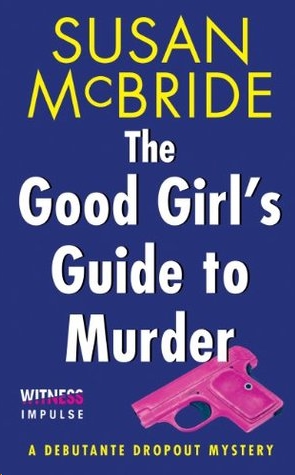 This book is dedicated to my friends and family for being the best cheerleaders a starving artist could ever hope for. I love and cherish you all.

The Good Girl’s Guide to Murder

M
any thanks to Robin Waldrom, M.D. (aka Doc Robin) for coming up with a very interesting idea for murder, and to my web diva, Janell Schiffbauer, for answering my questions about web design.

Thanks always to the Deadly Divas-Letha Albright, Denise Swanson, and Lisa Kleinholz-for sticking together and making the impossible possible.

My eternal gratitude to Sarah Durand, editor extraordinaire, for her insightfulness and enthusiasm. Thanks also to Jeremy, Diana, and all the folks at Avon, who’ve made things so easy for me!

Marilee Mabry didn’t even have to raise her voice, and the huge vase of flowers was hastily lowered. The elaborate arrangement from one of Dallas’s premier floral designers, Dr. Delphinium, nearly hid the woman behind it, until she deposited the bouquet on the coffee table with a
clunk
and backed away.

“I’m sorry, ma’am. I was just trying to help with the party preparations.”

Marilee scowled at the unadorned face and wild dark hair hanging down to where boobs should have been.
What was it with these New Age flower children? Hadn’t they heard of straightening wands, padded bras, or Bobbi Brown?

She flicked be-ringed fingers, motioning the girl away. “Please, do me a favor and go help somewhere else,” she instructed, indifferent to the chill in her drawl, and watched the bewildered expression turn to dismay.

“I can’t believe that you . . . you’re not anything like I’d imagined . . . oh, forget it,” the young woman stammered, then ducked her head and scurried off like a frightened rabbit.

Was she an intern?

A friend of Kendall’s?

Though she looked at least a decade older than Kendall’s eighteen.

Was she someone from Twinkle Productions?

Ah
, one of
The Sweet Life’
s newer production assistants. She had to be.

There seemed to be bushels of those lately.

Marilee tapped a finger to her lips, thinking something about the shape of the hazel eyes and set of the mouth seemed familiar.

Hmm, a name was on the tip of her tongue, really
.

Something with an
R
, wasn’t it? Randa, Retha, Renée?

Heavens to Betsy, she couldn’t expect to remember everyone!

There were always so many people wandering around her offices and
The Sweet Life
set these days, half of them unfamiliar. Her staff had grown so fast in the past six weeks—thanks to an infusion of crew from Twinkle—that she’d long since given up memorizing names and faces. Thank God this was Texas and calling everyone “hon” worked in a pinch.

Still it was disconcerting to feel that she had strangers among her inner circle. When they’d started out years ago, taping locally at one of the downtown stations, she’d had only a small crew, operating on a shoestring. She trusted department heads to do the hiring now, while she focused on hosting the show, on writing books, making videotapes, and developing related projects. Even if she wanted to—and she didn’t—she simply couldn’t be all things to all people. She wasn’t an octopus; she only had two hands, for God’s sake.

Though that was the price of fame, wasn’t it?

Never mind
, she told herself and fiddled with the vase overflowing with artfully arranged Oriental lilies and green bamboo until it looked absolutely perfect. She stepped back to admire her handiwork, clicking tongue against teeth.

If she wanted anything done right, she still had to do it herself.

Wasn’t that always the way?

Even married to Gilbert, she’d had to do everything: take care of the house, pay the bills, set up doctors’ appointments, arrange vacations, and—perhaps trickiest of all—rear their daughter.

Dear, troubled Kendall
, she mused with a shake of her head.

The girl had been a fussy baby and a demanding toddler; ripening into a needy teenager who required far more attention than Marilee could possibly give. Though it wasn’t all Marilee’s fault. Half that responsibility fell on Gil. Kendall had never received the affection she’d wanted from her father—or so the therapists had concurred—and, for that matter, neither had Marilee.

Kendall had been getting on her nerves all morning, whining about not being allowed to borrow any of Mari’s best jewelry, complaining that her new pair of Jimmy Choos pinched her toes, and begging Mari to open the bottle of reserve stock Dom Perignon she’d been hoarding for tonight’s big event “so I can have a little taste.”

It was enough to give her an ulcer, if she didn’t have one already.

Instinctively, Marilee reached for her third left finger, but it was bare. No wedding band to twist, not for six years, and still sometimes she tried out of habit.

Would things have been different for Kendall if there’d been no divorce? Was that at the root of her lack of self-worth?

Not that the divorce had been Mari’s idea to begin with. Still, would she be where she was if it hadn’t happened?

When she thought about it—really, truly, deeply—it seemed a wonder she and Gil had lasted as long as they did. More amazing that she hadn’t smothered him with a pillow along the way, much as she’d been tempted. Always leaving his dirty clothes on the floor, mussing up the bathroom, pretending to slave away at the office, then disappearing for days on “business trips” when he was really off boinking his assistant, a former nurse’s aide who looked like the love child of Pamela Anderson and Carrot Top.

She realized she was gritting her teeth and made herself relax.

That was then, Marilee
.

This was
now
, and everything was different. Her life was her own, and she’d taken the reins in a big way.

No, a
colossal
way.

She let her gaze dance over the cadre of people—a mingling of staff and additional hired help—who moved purposefully within the cavernous surroundings, readying the place for tonight’s big premiere. A warm buzz of voices filled her ears, as did the soothing strains of a Vivaldi violin concerto flowing from discreetly placed speakers. It would be an occasion to remember, a chance for friend and foe alike—yes, she had invited Gilbert and his hussy, had encouraged him to come for Kendall’s sake, if only to stick it to them—and Marilee could hardly wait until the clock struck eight and guests began to arrive.

This was
her
time. She was on top of the world and suddenly understood how Martha Stewart must have felt when she rang the bell at the New York Stock Exchange, the day her corporation went public (before her trumped-up trial and conviction over a silly stock sale).

The thrill was undeniable.

She rocked on her heels and looked around her. Ah, how she loved her new sound stage! Each nook and cranny designed to her specifications by a team of architects, a brilliant contractor and his crew, and a slew of Dallas’s top-notch decorators who fleshed out her vision. Needless to say, no expense had been spared. Twinkle Productions had been extremely generous in giving her what she wanted.

This was her dream. She deserved to be indulged, and she’d already made up her mind that there would be no more skimping.

She’d spent most of her married life doing that, anyway. Clipping coupons, creative decorating—translation: shopping for furniture at Goodwill—even making all of Kendall’s clothes for a dozen years until Gilbert’s surgical supplies company finally took off . . . and then so did Gilbert. With Amber Lynn, his secretary-whore.

Marilee pursed her lips at the mere thought of the auburn-haired bimbo with her collagen-filled lips and saline-filled breasts. She’d often pondered how delightful it would be to take a pin to the woman, stick her strategically, and let her leak until there was nothing left of her but deflated skin.

Beneath her rib cage, her heart did one of its funny flutters, and she felt suddenly woozy. She gripped the back of a nearby chair until her pulse settled down and the light-headedness faded.

What was wrong with her?

Did merely thinking of Gil and Amber make her dizzy?

Still jealous, Mari? Even with the divorce a half-dozen years behind you?

She shook her head, setting her freshly styled and highlighted hair to shimmying around her face.

Gilbert would truly be sorry when he saw firsthand what she had become without him. He would regret casting her aside like a hunk of Grade-D beef and leaving her to fend for herself and Kendall without child support, alimony, or a familiar roof over their heads.

Not that she missed him, because she didn’t. Gil had never been any great shakes, in or out of bed. Besides, she had her own stud muffin to keep her warm at night, a certified personal trainer who kept her in shape, so to speak. His name was Justin Gable, and he was definitely “able” in so many ways: ador
able
, pli
able
, and dispens
able
.

So what if she wasn’t in love him? Certainly not in that google-eyed way she’d once loved Gil (when she was too young to know any better). Was that a crime in this post-
Sex and the City
age?

Being with Justin meant that she wasn’t alone, and that seemed like a victory in itself.

She might be nearing fifty, but she wasn’t dead yet. She still had urges like any other red-blooded female. Why the hell not satisfy them with an eager young buck with six-pack abs and a hankering to please as opposed to a man whose sagging belly, red Corvette, and Viagra screamed, “Mid-Life Crisis!”

Besides, she’d kept herself up. A little Botox here, a nip and tuck there, and she could stop the clock for another ten years. She smoothed her hands over slim hips, feeling great about her looks, thinking she resembled Candice Bergen at her peak, the same streaky blond hair, thin build, and blue eyes. Marilee considered herself the epitome of growing older gracefully, still alluring enough to attract the opposite sex and to evoke envy in other women, even her own daughter. Would that it could last forever.

Justin dabbled in Chinese herbs, swore up and down that they had special healing powers and anti-aging qualities, but Mari didn’t like to take pills or powders with odd names. She preferred not to touch tea or soda with caffeine, which made her heart race wildly and kept her up at night.

She had the genes of a survivor. That’s all she needed to get her through from one day to the next. Not prescriptions or holistic remedies.

God knows she was looking forward to sticking around a long while and finally living her wildest fantasies.

And they all started with the party.

Marilee crossed her arms over her raspberry cashmere sweater set and toyed with the vintage Mikimoto pearls at her throat as she surveyed the innards of the building that housed her production offices and television studio, converted from a warehouse in Addison, deep in the suburbs of North Dallas. Just six weeks ago, they’d started shooting new shows for her syndicated series here, a daily hour-long “how to” lesson for women everywhere who wanted the best without having to pay a high price.