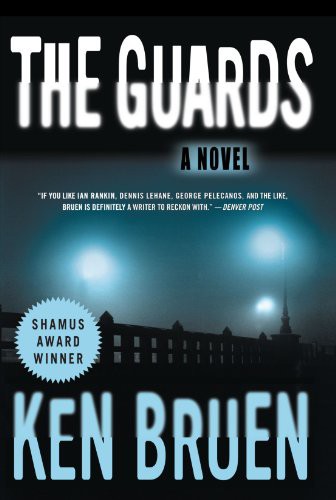 Praise for
The Guards
by Ken Bruen

“Bruen is a brilliant, lyrical, deeply moving writer who can make you laugh and cry in the same paragraph and whose characters are so sharply portrayed that they almost walk off the page at you. If you like Ian Rankin, Dennis Lehane, Pelecanos, and the like, Bruen is definitely a writer to reckon with.”

“Bruen is an original, grimly hilarious, and gloriously Irish. I await the further adventures of the incorrigible Jack Taylor.”

“The next major new Irish voice we hear might well belong to Ken Bruen.”

“Bruen’s astringent prose and death’s-head humor keep this quest for redemption from getting maudlin, just as his ‘tapestry of talk’ makes somber poetry of the bar-stool laments that serve as dialogue. Even in barrooms, ‘there are poets among us,’ and sometimes their voices are fierce.”

“The story is dark and the style is elegant, smooth, spare, and silky as the best aged Irish whiskey. Sharp, swift, and blackly comic.”

“Hard-boiled, eccentric, darkly comic: Bruen bows to but doesn’t just mimic James M. Cain and the other great noirists in a breakout novel not to be missed.”

“ The Guards
blew me away. It’s dark, funny, and moving—just for starters. With a sharp eye and a lyrical voice, Ken Bruen takes us on a powerful odyssey through the mean streets of Galway, straight into the Irish heart. Bruen’s tale is a potent draft of desire and hopelessness, conviction and surrender, inadvertent heroism and unexpected grace. This is mystery writing of a high order.”

“ The Guards
is a wonderful book, wrenching and real, fast, funny, and wise in every sense. Why the hell haven’t I heard of Ken Bruen before? He’s a terrific writer and
The Guards
is one of the most mesmerizing works of crime fiction I’ve ever read. I’m going to read the rest of his work now, so don’t bother me for a while. And when he’s got a new one, send it to me quick. This guy is the real thing.”

“ The Guards
is raw, hard, bitter, and amazing. It’s got that ancient feel to it, as of a primal story being retold with a fine, careless Irish swagger. It’s as if Bruen made up his mind to tell us this story whether we wanted to hear it or not. Oh we do. For sure.”

“The Guards
is an astounding novel, a poetic account of a desperation as deep and cold as the North Sea, retribution, and resurrection. It’s so good I can’t think of it as a crime novel. It’s a fine book with some crimes.”

“The Guards
is a pint and a half of perfect book. Make it this year’s specialty of the house.”

—Boston Teran, author of
The Prince of Deadly Weapons

“The Guards
kicked my ass, it’s up there with the best. If Elmore Leonard got together with James Joyce to write a Spencer novel, this is what you’d get!”

THE GUARDS. Copyright © 2001 by Ken Bruen. All rights reserved. Printed in the United States of America. No part of this book may be used or reproduced in any manner whatsoever without written permission except in the case of brief quotations embodied in critical articles or reviews. For information, address St. Martin’s Press, 175 Fifth Avenue, New York, N.Y. 10010.

First published in Ireland by Brandon, an imprint of Mount Eagle Publications

It’s almost impossible to be thrown out of the Garda Síochána.

You have to really put your mind to it. Unless you become a public disgrace, they’ll tolerate most anything.

I’d been to the wire. Numerous

And still I didn’t shape up.

Or rather sober up. Don’t get me wrong. The gardaí and drink have a long, almost loving relationship. Indeed, a teetotal garda is viewed with suspicion, if not downright derision, inside and outside the force.

My supervisor at the training barracks said,

Nods and grunts from trainees.

“And the public likes us to like a pint.”

He paused to let us taste the pun. He pronounced it, in the Louth fashion, "blaggard".

Ten years later I was on my third warning. Called before a supervisor, it was suggested I get help.

“Times have changed, sonny. Nowadays there’s treatment programmes, twelve-step centres, all kinds of help. A spell in John O’ God’s is no shame any more. You’ll rub shoulders with the clergy and politicians.”

I wanted to say,

“That’s supposed to be an incentive!”

But I went. On release, I stayed dry for a while, but gradually, I drank again.

It’s rare for a garda to get a home posting, but it was felt my home town would be a benefit.

An assignment on a bitter cold February evening. Dark as bejaysus. Operating a speed trap on the outskirts of the city. The duty sergeant had stipulated,

“I want results, no exceptions.”

My partner was a Roscommon man named Clancy. He’d an easygoing manner and appeared to ignore my drinking. I had a thermos of coffee, near bulletproof with brandy. It was going down easy.

We were having a slow duty. Word was out on our location. Drivers were suspiciously within the limit. Clancy sighed, said, "They’re on to us.”

Then a Mercedes blasted by. The clock hit thermo. Clancy shouted,

I had the car in gear and we were off. Clancy, in the passenger seat, said,

“Jack, slow down, I think we might forget this one.”

I had the siren wailing, but it was a good ten minutes before the Merc pulled over. As I opened my door, Clancy grabbed my arm, said,

I rapped on the driver’s window. Took his time letting it down. The driver, a smirk in place, asked,

Before he could respond, a man leaned over from the back, said,

I recognised him. A high profile TD. I said,

“Have you any idea who you’re talking to?”

“Yeah, the gobshite who screwed the nurses.”

The TD was outa the car, coming at me. Indignation writ huge, he was shouting,

“Yah brazen pup, I’ll have your job. Do you have any idea of what’s going to happen?”

And punched him in the mouth.

BOOKS AND ALL POINTS WEST

THE HAND THAT ROCKS THE CRADLE

There are no private eyes in Ireland. The Irish wouldn’t wear it.

The concept brushes perilously close to the hated “informer". You can get away with most anything except “telling”.

What I began to do was find things. Not a difficult task, it requires only patience and pig stubbornness. The latter was my strongest point.

I didn’t come to one morning and shout, “God wants me to be a finder!” He could care less.

There’s God and there’s the Irish version. This allows Him to be feckless. Not that he doesn’t take an interest, but He couldn’t be bothered.

Because of my previous career, it was believed I had an inside track. That I knew how things worked. Over a period of time, people sought me out, asked for my help.

I hit lucky and found resolutions. A minor reputation began to build on a false premise. Most important of all, I was cheap.

While all the rest go

it remains true to the format of fifty or more years ago. Beyond basic. Spit and sawdust floor, hard seats, no-frills stock. The taste for

hasn’t yet been acknowledged.

It’s a serious place for serious drinking. No bouncers with intercoms on the door. Not an easy pub to find. You head up Shop Street, skip Garavan’s, turn into a tiny alley and you’re home. If not free, at least unfettered.

I like it because it’s the only pub that never barred me. Not once, not ever.

The bar is free of ornamentation. Two hurleys are crisscrossed over a blotched mirror. Above them is a triple frame. It shows a pope, St Patrick, and John E Kennedy. JFK is in the centre.

Once the pope held centre field, but after the Vatican Council he got bounced. He clings to an outside left. Precarious the pose.

I dunno which pope he is, but he has the look of them all. It’s unlikely he’ll regain mid-field any time soon.

Sean, the owner, who can recall Cliff Richard being young, said to me,

“Cliff was the English Elvis.”