Read The Harp of Imach Thyssel: A Lyra Novel Online 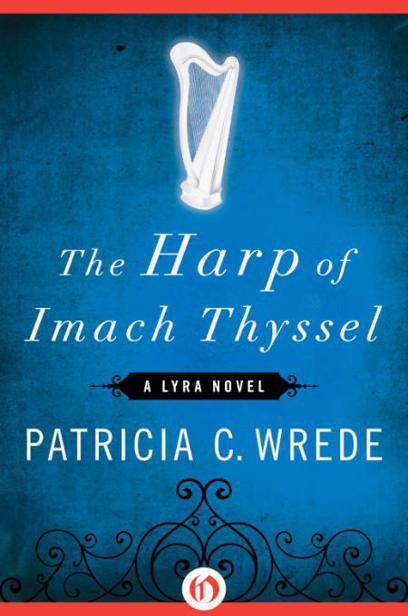 Introduction to the Lyra Series

A Biography of Patricia C. Wrede

Introduction to the Lyra Series

T
HE
L
YRA SERIES IS DEAR TO MY HEART,
partly because it was the first imaginary world I created for my novels and partly because it includes the first two novels I ever wrote,
Shadow Magic
and
Daughter of Witches.
I learned an enormous amount from writing those books.

I also learned a great deal from running
Daughter of Witches
through my very first critique group, the Scribblies. I was several chapters into the first draft when we started the group in 1980, so it was the first thing I submitted for comment, a chapter or two at a time.
Shadow Magic
had already been under submission to publishers for nearly two years. When it finally sold, I did run some of the revisions through the group, but I didn’t make any of the more drastic changes people suggested. I worried that I might turn the book into something the editor wouldn’t like; after all, she’d bought its original version. So I concentrated on the parts where the editor herself had requested changes (there were plenty) and left everything else pretty much alone.

Daughter of Witches
was my first attempt at writing a single-character, tight third-person viewpoint, and I cussed my way through large portions of it as I tried to figure out how to get crucial information across to the reader when the viewpoint character wasn’t around for those scenes. By the time I finished it, I was more or less comfortable writing a tight viewpoint, and from then on it became very nearly my default.

I also chose to make
Daughter of Witches
an indirect sequel to
Shadow Magic
—that is, rather than continuing the adventures of the same set of characters, or even using a different set of people in the same region, I picked people who lived several thousand miles away, for whom the events that took place in
Shadow Magic
were, at most, distant and relatively unimportant or unrelated problems. I did this for three reasons. As a writer, I wanted to remind people that a world is an enormous place, especially when there aren’t phones or radios or TVs to quickly spread news and information. I also wanted to explore some themes and background events that just didn’t fit in the book I’d already written. A third, practical reason was that I’d started writing
Daughter of Witches
a good six months before
Shadow Magic
sold, and I had no guarantee that my first book would ever sell. I figured that nobody starts by buying Book #2 of a series, if Book #2 depends heavily on Book #1. But if I made my second book a related stand-alone, something that shared the background and world-building, but that didn’t actually
need
the first book to make sense, then even if
Shadow Magic
never sold, I could still market
Daughter of Witches
on its own.

Fortunately, Ace Books bought both titles, and was interested in more.
The Harp of Imach Thyssel
was my fifth book, and again, it was an indirect sequel, which set the pattern for the series. It was also the book that finally pushed me into quitting my day job to write fulltime. It was my first (and rather timid) experiment in writing multiple viewpoints—timid, because I didn’t quite have the nerve to do the kind of large, complex, braided storylines that really
need
a multiple-viewpoint structure. I ended up doing something more like a central storyline with sidebars, which worked well for the book, I think, but didn’t quite stretch me as a writer as I’d intended.

Next came
Caught in Crystal
, in which I tried to dig deeper into my main character and use flashback scenes for the first time. After the book was published, many readers asked if I’d actually written two novels and then cannibalized the first one for the flashback story in the second, so I guess the flashbacks were pretty convincing! The answer is no. I wrote
Caught in Crystal
as its own narrative; I hadn’t even used an earlier short story. The flashback sequences were written in order, as they came up during the present-day story. (“Present day” for this book was set roughly a thousand years prior to that of the first three Lyra titles, continuing the pattern of an indirect sequel.)

The last of the Lyra books (so far) is
The Raven Ring
, written over fifteen years ago. It fills in a little of the history between
Caught in Crystal
and the three other titles. I was trying to work from a careful outline, but I failed miserably; the story went off the rails in Chapter 7, when the main characters were attacked and one of them refused to just leave before the city guard got there. By the time they finished dealing with the cops, my heroine wasn’t about to leave town until she knew who was after her and why, which completely wrecked my plans for a chase-and-battles sequence as she and her friends made their way back to her mountain home. Instead, I ended up with a sort of medieval-urban fantasy.

I did work out the whole deck of Lyran fortune-telling picture cards at one point—all four suits, a set of Major Trumps and a set of Minor Trumps. (I really enjoyed making Taxes, one of the Minor Trumps.) Most of the cards never made it into the story, but I had a lot of fun figuring them all out.

About the same time as I was writing
The Raven Ring
, my publisher decided to reissue the first three Lyra books, and asked if I wanted to make any changes or edits.
Daughter of Witches
and
The Harp of Imach Thyssel
were in pretty good shape; I fixed a few awkward sentences, but that was about all.
Shadow Magic
was another story. The full manuscript had never been run through my critique group, and it showed. Furthermore, I felt that I’d finally learned enough craft to make it worth the time and effort to do a complete rewrite of my first novel. So I did, and I was much happier with the result.

Fast-forward a few years, to a mailing list in which a number of folks were discussing writing, editing, revising, and so on. One thing led to another, and I ended up sending the group a before-and-after version of the first chapter of
Shadow Magic
, so they could see what I meant when I talked about an extensive revision. A few years after
that
, I turned the before-and-after sample into a series of blog posts, showing the original text, my revisions, and my comments on what I’d revised and why.

When Open Road acquired the ebook rights, they asked me to edit the posts into an introduction to the Lyra series. Below is the latest version.

This is the first chapter of my first novel, Shadow Magic, which was first published in 1982 and then revised roughly ten years later for an omnibus edition. The strikeouts show words, phrases, and sentences that appeared in the original version but that I deleted on revision. The bold text indicates new phrases, and plain text shows what remained the same in both editions. My explanations of the changes appear in italics.

As the last wagon in the caravan rumbled into the courtyard of the Blue Heron Inn, Maurin Atuval allowed himself to relax. Theoretically, the safety of the trade goods had been the responsibility of the cargo masters since the wagons passed through the city gates of Brenn, and the other caravan guards had long since abandoned any pretense of patrol. Unlike his fellow guards, however, Maurin was himself a Trader, and could expect to share in the caravan’s profits—and losses. So he had continued to watch the wagons even after his duties were officially over.

As it stands, there’s nothing terribly wrong with the original opening—it’s a “zoom-in,” starting with a long view, slowly focusing down until we get to characters. But for an action-adventure that moves fast enough to have a kidnapping by the third chapter, it’s too slow. Also, in the original, we don’t get to an actual character until the end of the fifth paragraph, and the whole thing is in a sloppy omniscient viewpoint. So the original five paragraphs went, replaced by two that are a lot more specific and that have a specific viewpoint, that of Journeyman Trader Maurin Atuval.

The hired guards lined up near Master Goldar to receive their pay, while the Traders began the cheerful ritual of unloading and securing their goods. Maurin was hauling a bundle of white fox pelts to the storage room when someone tapped him on the shoulder from behind.

Maurin turned his head to see who had accosted him.
It was a slender young man in
the leather uniform
of the caravan guards,
whose
unruly shock of sandy brown hair
made him look younger than Maurin knew him to be.
“Har, what are you still doing here?” Maurin said. “
I thought you would be away home by now.”

How it feels by Brendan Cowell
Wondrous Beauty: The Life and Adventures of Elizabeth Patterson Bonaparte by Berkin, Carol
Moreton's Kingdom by Jean S. MacLeod
The Lost Trucker (The Trucker Saga) by Dewallvin, Rose
Rojan Dizon 02 - Before the Fall by Francis Knight
More Than You Know by Beth Gutcheon
Time Patrol by Poul Anderson
No Worse Enemy by Ben Anderson
DARK HOUSES a gripping detective thriller full of suspense by HELEN H. DURRANT
Midnight Quest by Honor Raconteur
Our partner