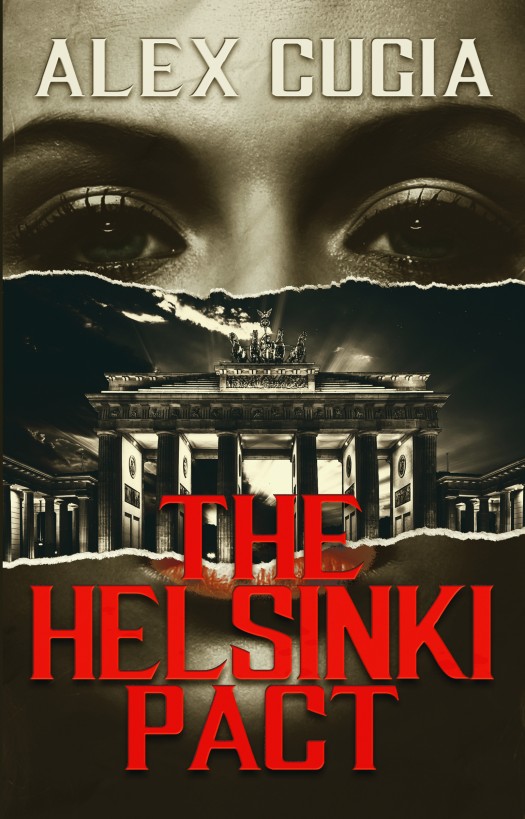 at and distributed by
Smashwords

The moral rights of the
author have been asserted

This book is a work of
fiction

Thank you for
downloading this ebook, which is licensed for your personal use.
The book remains the copyrighted property of the named author or
publisher and should not be distributed to others, whether
commercially or non-commercially. If you would like to share it
then please obtain authorised copies for other readers or advise
them where to get one. If this copy was not obtained for your
personal use then please visit your favourite ebook retailer to
obtain your own copy. Thank you for respecting the author's hard
work in producing the book you're enjoying.

This book is also
available in a print edition

Prologue: March 1989
Herren does a deal with General Lushev

Chapter 1: Friday September 1
1989
Thomas smuggles in the maps, meets and falls for
Bettina

Chapter 9: Friday September 15
1989
A night at the opera with Stephan and
Camille

Chapter 14: Tuesday October 3
1989
Thomas lies at his debriefing and gets beaten
up

Chapter 18: Friday November 10
1989
Bettina and Thomas have a meeting with
Dieter

Chapter 19: Saturday January 13
1990
Dieter tells Bettina and Thomas of the theft in
Dresden

Chapter 20: Sunday January 14
1990
Bettina and Thomas drive to Dresden and find a
room

Chapter 32: Wednesday January 17 1990, early
hours of the morning
Thomas and Betta fight, then get
it on

Chapter 39: Thursday January 18 1990,
evening and on past midnight
Thomas and Bettina rush
back to Berlin

Chapter 45: Sunday January 21 1990,
evening
She bumps into Hanno, later runs for her life
to the flat

Chapter 47: Sunday January 21 1990,
evening
They escape through the tunnel chased by
Hanno

IT was a strange setting in which
to discuss the future of a nation.

Alfred Herren rubbed his gloved
hand over the room window to clear it and watched as the dark grey
Tupolev jet rebounded twice on the icy air field and ground to a
halt. The Soviet officials were fifty minutes late. "In all
likelihood deliberately," he thought "a crude negotiating tactic."
But calling this meeting on Soviet ground, in an abandoned military
base on the Finnish border, was at least an admission of interest.
Chancellor Kohl had confided to him that his overture to President
Gorbachev had struck a chord. Now it was time to lay all the cards
on the table. If the information he had received on the economic
situation in the Soviet Union was correct then the deck was stacked
in his favour.

Herren removed a glove, blew on
his numbed fingers and pondered the potential outcomes. As CEO of
Deutsche Bank he had lived through countless business negotiations
and had generally been able to pull off the expected result. But
businessmen were by definition rational beings, even if they didn't
always act that way. Seen from the Soviet side, where it would be
viewed as a political move, his proposal could seem a provocation,
an insult to a ruling superpower. The meeting could last a few
minutes and officially would never have taken place. No trace would
exist in the records. Or the lives of millions of people and the
very shape of Europe would later change forever as a result of the
processes started by their discussions.

Through the whirlwind of snow and
ice fragments raised by the jet’s exhausts he could make out the
silhouettes of two men leaving the plane. Herren immediately
identified the first, tall, well-built and in military uniform, as
General Lushev, Commander of the Warsaw Pact forces. "The man
behind him is probably a political emissary." he thought. He
glanced through the dossier prepared by the German Interior
Ministry. "Ah. Undersecretary Pershev." he realised as the men came
closer. Pershev was a rising star, educated in the United States
and young to have reached the eminence he had. A little younger
than Herren at just over forty he was the former head of one of the
country’s largest conglomerates and now one of Gorbachev’s most
influential advisors.

Herren shut the report with a wry
smile. "They mean business," he mused to himself "if they’re
sending a Herren clone to negotiate."

The door at the far end of the
now abandoned training room opened loudly and the noise of General
Lushev’s boots on the cement floor resonated across the bare walls.
He looked considerably older than the picture in Herren’s file but
no less imposing. He was over six feet tall with vivid green eyes
that betrayed intelligence and suspicion and that contrasted with
his grey-white hair. Herren sensed their intensity as the eyes
scanned him, searching for a weak spot. A massive hand took his a
moment later and gripped hard.

Lushev broke off, turned to
Pershev and spoke a long sentence in Russian. There was a long,
awkward silence before Pershev nodded, taking three chairs from a
stack in the corner and gesturing to everyone to sit
down.

“Mr Herren, please take a seat.”
he said in fluent English. His tone was pleasant yet firm. “I hope
you’ll forgive us the discomfort of this deserted air base as a
meeting place, but we understood that confidentiality was of the
utmost importance.” He was dressed elegantly: and with his dark
grey suit, starched white shirt and yellow tie he could have easily
passed as a successful Western European businessman. “Now, we
understood from President Gorbachev that your Chancellor has a
proposal aimed at enhancing German-Soviet cooperation. I’m afraid
we’ve only been given a very sketchy outline but I’m sure you won’t
mind expanding.”

Herren looked at him and then at
Lushev. “If you’ll forgive my lack of diplomacy I’ll go straight to
the point. We each have something the other needs. The Soviet Union
is on the verge of economic collapse. Gorbachev’s perestroika
reforms so far have had a disastrous effect on the economy. Trying
to keep up with President Reagan’s increase in military spending,
his so-called Star Wars Program, has caused your engine to melt
down. The queues for food have never been longer. Social unrest is
mounting.”

He paused for effect, as Pershev
translated. He tried to read some form of reaction in General
Lushev’s eyes, but could see no trace of agreement or
denial.