The Hidden People of North Korea 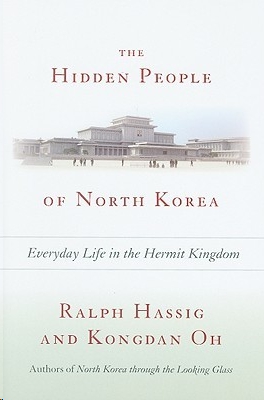 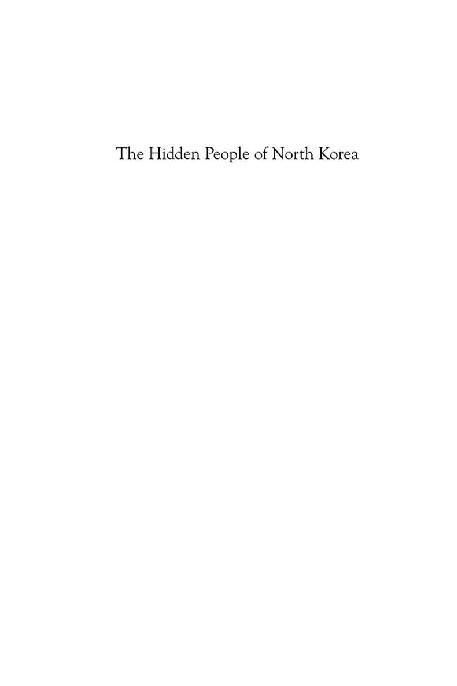 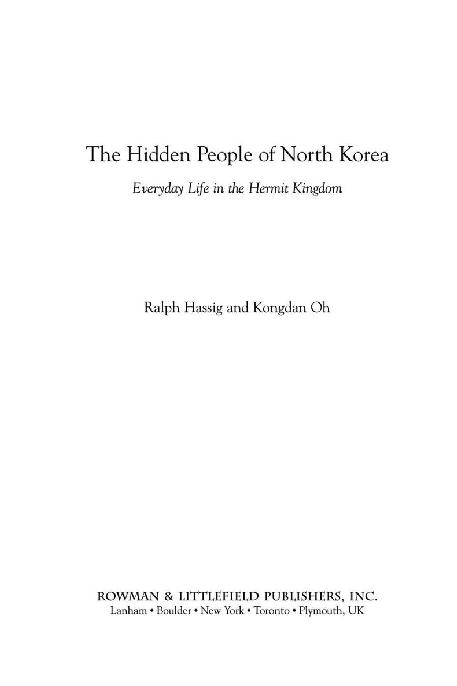 All rights reserved
. No part of this book may be reproduced in any form or by any electronic or mechanical means, including information storage and retrieval systems, without written permission from the publisher, except by a reviewer who may quote passages in a review.

The paper used in this publication meets the minimum requirements of American National Standard for Information Sciences—Permanence of Paper for Printed Library Materials, ANSI/NISO Z39.48-1992.

We must envelop our environment in a dense fog to prevent our enemies from learning anything about us.

Kongdan (Katy) Oh’s parents came from North Korea, although in the final years of the Japanese occupation they lived in China. As members of the educated class, her parents were understandably wary of the new communist “working-class” government being set up in the North, and with hundreds of thousands of other North Koreans, they fled to the South before the border was closed. Since coming to the South, they have not heard anything from their relatives who stayed behind.

Under a succession of South Korean authoritarian governments that viewed the North as an enemy state, school children had no opportunity to learn anything about North Korea except what the authorities permitted under the National Security Law—still in force today but greatly relaxed since the end of the Cold War. Nor was information about other communist states available. It was not until she enrolled in graduate study at the University of California, Berkeley, that Oh was able to begin an objective study of North Korea.

Upon graduation, she went to work for the RAND Corporation with a primary assignment to analyze how North Korea could threaten the national security of the United States. In practice, this meant that much of her work, first at RAND and then at the Institute for Defense Analyses, has been related to North Korea’s weapons of mass destruction. A secondary field of study is the nature and stability of the Kim regime, which after the terrorist attacks of September 11, 2001, was dubbed one of the three “axis-of-evil” governments by the George W. Bush administration. Missing from this study, and from most studies of North Korea, is an analysis of how the ordinary people live; since they have absolutely no voice in formulating their government’s policies, what happens to them is of little concern to foreign governments.

The book’s first author, Ralph Hassig, developed an interest in North Korea after being asked to edit and coauthor reports and articles with Katy Oh, who happens to be his wife (they met while they were teaching for the University of Maryland University College in Seoul). Since the early 1990s, Hassig has devoted most of his research time to North Korean studies, doing much of the English-language writing and research and relying on Oh to do most of the presentations, Korean-language research, and networking with other North Korea watchers in South Korea and around the world.

After completing our first book on North Korea, which was published in 2000, we decided to write something about the North Korean people, a topic that up to that time had been extremely difficult to research because few North Koreans could get out of their country and few foreigners could get in. This situation began to change in the late 1990s as thousands of North Koreans escaped into China; by 2009, over fifteen thousand of these defectors had made their way to South Korea, where they provide valuable information about everyday life in the modern-day hermit kingdom they were forced to leave behind. By interviewing them and by talking with other interviewers and reading their reports, it is now possible to piece together what life is like in North Korea today.

About Korean Names and Pronunciation

We’d like to say a few words about the romanization and pronunciation of Korean names. The Korean alphabet is a wonderfully transparent writing system, but when it comes to transliterating it into roman letters, there are several alternatives. Until 2000, the most common method was to use the McCune-Reischauer System, a version of which we use in this book because it is familiar to several generations of readers and because it is also used by North Koreans to translate their works into English. We have simplified the system by dispensing with apostrophes (used to indicate aspirated consonants) and diacritical marks above vowels. The resulting simplification will be admirably suited to the needs of most readers, and those who are familiar with Korean will be able to translate back into Korean. Since 2000, South Korea’s Ministry of Culture and Tourism has put forward a somewhat different method of transliterating Korean into English. This method, the Revised Romanization, has met with some resistance, even from major South Korean newspapers, but now seems to have been adopted widely in South Korea. However, because it looks somewhat strange to many foreigners, ourselves included, we have chosen to stay with the older system.

In Korean names, the family name usually comes first, followed by one or two given names. Some Koreans hyphenate their two given names, others write them separately, and some even combine the two (for example, the book’s second author). The official North Korean approach is to write them separately, as in Kim Il Sung and Kim Jong Il; however, to make it clear to foreign readers which are the family names and which are the given names, we have decided to use an equally popular approach and hyphenate the two names, hence, Kim Il-sung and Kim Jong-il. Throughout the book Korean names are presented in this manner except where Koreans (outside of North Korea) specifically use another form.