Read The History of England - Vols. 1 to 6 Online 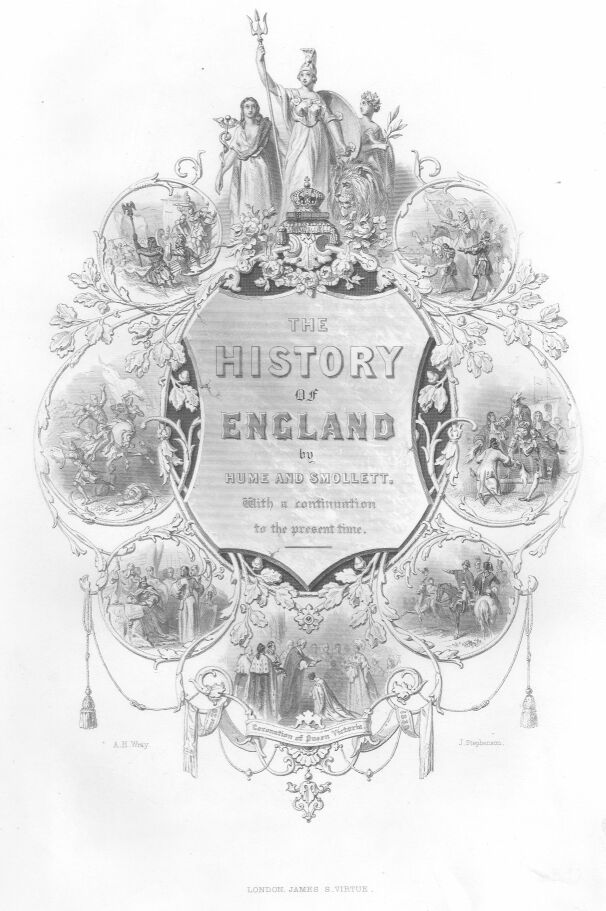 The Online Library of Liberty

A Project Of Liberty Fund, Inc.

The Online Library Of Liberty

This E-Book (PDF format) is published by Liberty Fund, Inc., a private, non-profit, educational foundation established in 1960 to encourage study of the ideal of a society of free and responsible individuals. 2010 was the 50th anniversary year of the founding of Liberty Fund.

It is part of the Online Library of Liberty web site
http://oll.libertyfund.org
, which was established in 2004 in order to further the educational goals of Liberty Fund, Inc.

To find out more about the author or title, to use the site's powerful search engine, to see other titles in other formats (HTML, facsimile PDF), or to make use of the hundreds of essays, educational aids, and study guides, please visit the OLL web site.

This title is also part of the Portable Library of Liberty DVD which contains over 1,000 books and quotes about liberty and power, and is available free of charge upon request.

The cuneiform inscription that appears in the logo and serves as a design element in all Liberty Fund books and web sites is the earliest-known written appearance of the word “freedom” (amagi), or “liberty.” It is taken from a clay document written about 2300 B.C. in the Sumerian city-state of Lagash, in present day Iraq.

To find out more about Liberty Fund, Inc., or the Online Library of Liberty Project, please contact the Director at
[email protected]
.

The History of England from the Invasion of Julius Caesar to the Revolution in 1688,
Foreword by William B. Todd, 6 vols. (Indianapolis: Liberty Fund 1983). Vol. 1.

Volume 1 of “Hume’s great
History of England
the theme of which is liberty, above all English constitutional development from the Anglo-Saxon period to the Revolution of 1688. This Liberty Fund edition is based on the edition of 1778, the last to contain corrections by Hume.

Liberty Fund, Inc. is a private, educational foundation established to encourage the study of the ideal of a society of free and responsible individuals.

The copyright to this edition, in both print and electronic forms, is held by Liberty Fund, Inc.

This material is put online to further the educational goals of Liberty Fund, Inc.

Unless otherwise stated in the Copyright Information section above, this material may be used freely for educational and academic purposes. It may not be used in any way for profit.

The Life of David Hume, Esq.: Written By Himself

Appendix I: The Anglo-saxon Government and Manners

Appendix II: The Feudal and Anglo-norman Government and Manners

This portrait of the author is provided in all the earliest editions of his History. The
reversal of letters in the word “philosophy” remains uncorrected throughout.

When david hume began his
History of England
the undertaking came, not from any sudden resolve nor as an entirely new enterprise, but as one possibly contemplated thirteen years before, in 1739, probably attempted several times thereafter, and certainly considered, at least as a corollary discipline, in a philosophical discourse published in 1748. Even so, any concerted effort long sustained necessarily awaited appropriate conditions: all happily combining for Hume upon his election, January, 1752, as Keeper of the Advocates’ Library in Edinburgh. With this appointment the author finally had “a genteel-office,” ready access to a collection of some thirty thousand volumes, and, no less desirable, leisure indefinitely extended to pursue his research. Heretofore, by mere exertion of his own commanding intellect, philosopher Hume had more than once set forth what he perceived to be the “constant and universal principles of human nature.” Now, as a philosophical historian, he could ascertain from dreary chronicles all the aberrations of human behavior as there exhibited in “wars, intrigues, factions, and revolutions.” These and other vagaries, previously recorded simply as odd phenomena, in Hume’s more coherent view constituted a varied range of “materials” documenting the “science of man.”

Once intent upon a history so formulated, the immediate question for this author was where to begin. In his own
Life
(an essay prefixed to the first, 1778, posthumous edition of the
History
and so reprinted here), Hume ingenuously speaks of being

“frightened” away from the very start—that is, from the time of Caesar’s invasion—and so at once passing over seventeen hundred years to “the accession of the House of Stuart [1603], an epoch when, I thought, the misrepresentations of faction began chiefly to take place.” Indeed this was Hume’s final decision, though he earlier admitted in a letter to Adam Smith, 24 September 1752, some inclination to commence with the preceding Tudor “epoch” [1485].

I confess, I was once of the same Opinion with you, & thought that the best Period to begin an English History was about Henry the 7th. But you will please to observe, that the Change, which then happen’d in public Affairs, was very insensible, and did not display its Influence till many Years afterwards. Twas under James that the House of Commons began first to raise their Head, & then the Quarrel betwixt Privilege & Prerogative commenc’d. The Government, no longer opprest by the enormous Authority of the Crown, display’d its Genius; and the Factions, which then arose, having an Influence on our present Affairs, form the most curious, interesting, & instructive Part of our History. . . . I confess, that the Subject appears to me very fine;

& I enter upon it with great Ardour & Pleasure. You need not doubt of my Perseverance.

For a historian tracing, in one period or another, the progress or decline of human welfare, the “influence” twice mentioned in the letter to Smith eventually required a

Something About You (Just Me & You) by Landis, Lelaina
Hobby by Jane Yolen
Everyday Hero: The Volunteers - a Darling Bay Short Story by Lila Ashe
100 Days of Right Believing: Daily Readings from The Power of Right Believing by Prince, Joseph
The Robber Bridegroom by Welty,Eudora.
Believing by Wendy Corsi Staub
Rise of the Federation: Live by the Code by Christopher L. Bennett
The Djinn by Graham Masterton
Seducing Mr Storm by Poppy Summers
Fighting Dirty: A Stepbrother Romance (When The Gloves Come Off Book 2) by Moore, Lila
Our partner