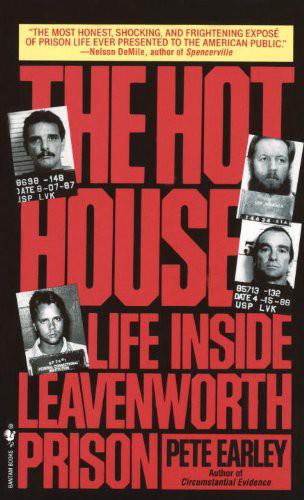 “Forget every prison book you’ve read and every prison movie you’ve seen.… You don’t read this book as an outsider looking into Leavenworth. On the first page, you open the gates of the prison; by the second page, the gates have been closed behind you—and you won’t get out until the final page. Even then you’ll never forget what you saw. A truly remarkable achievement.”

“A grimly fascinating tale … Earley successfully conveys the scary atmosphere of prison, and the never-back-down code a convict needs to live by if he’s to survive.”

“A powerful eyewitness account
… The Hot House
is an exciting, highly readable book which, without question, will generate renewed interest in prisons by both the public and the media.”

“If you’re going to read
any
book about prison,
The Hot House
is the one.…
For
anyone who wonders why America imprisons its criminals, this book is a must. It is the most realistic, unbuffed account of prison anywhere in print.”

“
The Hot House
is a page-turner, as compelling and evocative as the finest novel. The best book on prison I’ve ever read.”

“Hypnotic … We haven’t read a book as powerful as
The Hot House
in a long time.… Earley, the first reporter ever to be given free access to Leavenworth, does more than capture what it’s like to live behind bars. In re-creating a world governed by codes of conduct that fly in the face of accepted behavior and morality, Earley sheds surprising light on our own.”

“Before we had schools of journalism, there was a straightforward task called reporting that took you where you had not been, and told you what you had not known. This book is by a reporter, and gives the reader reporting at its very finest.… [
The
]
Hot House
is a book that sucks one deep into the darkness.… [It] makes the reader feel in the room while secret things are being said.… [It] offers no solutions to the prison problem; for that matter, it offers no clear statement of the problem. Earley is much too honest for such cheap tricks.”

“This is a book that fits the cliché: impossible to put down.”

“[A] harrowing book … Through Matthews, Silverstein, Bowles and others, Earley tells us the story of Leavenworth. In the process, he creates an exceptional work of journalism.”

“[A] riveting, fiercely unsentimental book … [Earley] vividly re-creates the strange world of the country’s oldest maximum security prison with its insular culture and attendant rituals.… And what a cast of characters Earley discovers.… To [his] credit, he does not romanticize the keepers or the criminals. His cool and concise prose style serves him well … this is a gutsy book.”

THE HOT HOUSE
A Bantam Book

All rights reserved
.
Copyright © 1992 by Pete Earley
.
Library of Congress Catalog Card Number 91-25400
.
No part of this book may be reproduced or transmitted in any form or by any means, electronic or mechanical, including photocopying, recording, or by any information storage and retrieval system, without permission in writing from the publisher
.
For information address: Bantam Books
.

Bantam Books are published by Bantam Books, a division of Random House, Inc. Its trademark, consisting of the words
“
Bantam Books
”
and the portrayal of a rooster, is Registered in U.S. Patent and Trademark Office and in other countries. Marca Registrada. Bantam Books, New York, New York

“
Fancy thinking the beast was something you could hunt and kill!… You knew, didn’t you? I’m part of you? Close, close, close! I’m the reason why it’s no go. Why things are what they are
.“

This book is an eyewitness account of day-to-day life inside the United States penitentiary in Leavenworth, Kansas, the oldest federal prison and one of the most dangerous in the nation. I was the first writer ever to have been given unlimited access by the federal Bureau of Prisons to one of its maximum-security prisons. The names of a handful of persons have been changed to protect them from physical harm or from further criminal prosecution, but all the characters are real and the events are described exactly as they happened.

The Wizard of Oz

Jeffrey Joe Hicks was a snitch. Carl Bowles was certain of it. But Bowles needed proof. Convicts at the U.S. penitentiary in Leavenworth, Kansas, hated informants even more than they hated guards. A “hack,” as guards at the maximum-security prison were called, was simply doing his job. But an inmate snitch was a Judas, and the best way to deal with a rat, as far as Bowles was concerned, was to kill it.

Bowles had been suspicious of Hicks from the moment they met eight months earlier, when Hicks was still being held in an area of the ancient prison reserved for new inmates not yet assigned permanent cells. Hicks had stood out among the “fish,” prison slang for newcomers. At twenty-eight, he had a small build and pubescent appearance, but it was his demeanor that everyone noticed. Hicks was terrified. “Guys were damn near fighting each other over him,” Bowles recalled later. “They said, ‘Oh, we got to protect this poor kid! Why, he’s white and he doesn’t want anything to do with the niggers and he is afraid they are going to take him and fuck him. Somebody’s got to do something.’ ”

Bowles had been the first to actually meet Hicks. At the time, he claimed he simply wanted to give Hicks
some advice, but guards suspected that the forty-seven-year-old Bowles had a different motive. The federal Bureau of Prisons identified Bowles in its files as a sexual predator, a convict who forced weaker inmates to satisfy his sexual needs. “It wasn’t the goodness of his heart that caused Carl Bowles to search out Jeffrey Hicks,” a guard remarked. “It was a lower section of his anatomy.”

Except for a short stint when he was free after an escape, Bowles had spent twenty-three consecutive years in prison. A convicted cop killer, kidnapper, and triple murderer, he had been taken into custody for the first time at age twelve. Bowles had literally grown up in jail, and few inmates knew their way as well around a prison or had better jailhouse instincts.

At Leavenworth, all convicts are released from their cells at six
A.M
., and are free to roam the large prison compound relatively unrestricted until ten
P.M
., when they are locked up for the night. Bowles had gone to the “fish tier” to meet Hicks within days after he arrived.

“First time in a penitentiary?” Bowles had asked.

“It can be pretty scary until a man figures out what is going on,” Bowles had said, shaking a cigarette out of a pack for himself and then offering one to Hicks. “Where you from?”

“A state joint in Michigan,” Hicks had answered.

“Oh yeah?” Bowles had remarked with interest. “Well, what they got you for?”

“Sure, kid,” Bowles had replied, his mood noticeably colder. He had dropped his cigarette, stomped it on the prison’s tile floor, and left.

Months later when he recalled that meeting, Bowles explained: “When Hicks told me he was a state prisoner from Michigan and then refused to tell me his crime, I knew there was something spooky about him. You see,
there are only two reasons why the feds accept state prisoners. The guy is either such a mean son of a bitch that the state joint can’t handle him or the state has to get rid of him because he’ll be killed by convicts if they put him in a state joint.

“Now, even an idiot can see that Hicks ain’t no ruthless motherfucker, so I figured there was something wrong with him. I figured he was a snitch.”

Just because Bowles had suddenly lost interest in Hicks didn’t mean others had. It took prison officials two weeks to process Hicks’s paperwork, and by that time another convicted killer and alleged sexual predator had invited Hicks to move into his cell. Guards and inmates assumed Hicks was the inmate’s “punk”—serving as the convict’s sexual partner in return for protection. But a few months after Hicks moved into the inmate’s cell, something strange had happened. Hicks and his cellmate were accused of plotting an elaborate helicopter escape. Lieutenant Edward Gallegos, who exposed the plot, said Hicks’s cellmate had tried to hire a helicopter pilot to swoop into the prison yard and rescue them.

The Bound Bride by Anne Lawrence
In Deep by Terra Elan McVoy
Time to Be in Earnest by P. D. James
The Thief Redeemer by Abdou, Leigh Clary
Moving On by Anna Jacobs
Heartache and Other Natural Shocks by Glenda Leznoff
Theron Destiny (Brides of Theron) by Rebecca Lorino Pond
Caged Eagles by Eric Walters
First Salvo by Taylor, Charles D.
A Corpse in the Koryo by James Church
Our partner