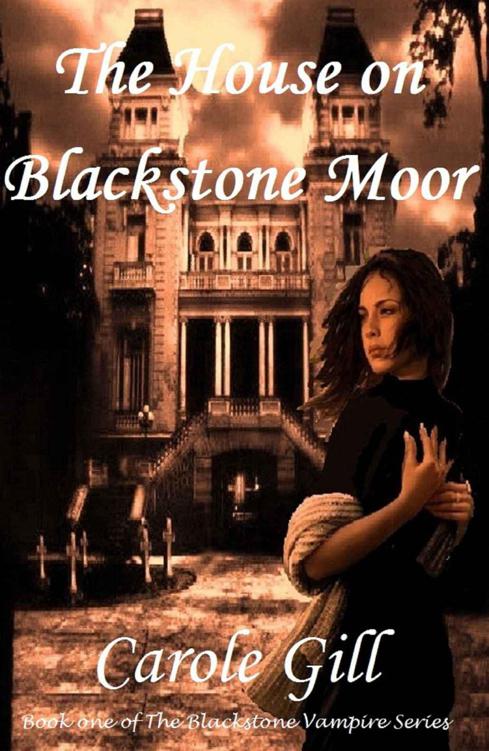 T
he House on Blackstone Moor

Book one of the Blackstone Vampires Series

This book is a work of fiction. Names, characters, and incidents either are products of the author’s imagination or are used fictitiously. Any resemblance to actual events or persons, living or dead, is entirely coincidental.

This ebook is licensed for your personal enjoyment only. This ebook may not be re-sold or given away to other people. If you would like to share this book with another person, please purchase an additional copy for each person you share it with. If you're reading this book and did not purchase it, or it was not purchased for your use only, then you should return it purchase your own copy. Thank you for respecting the author's work

To my darling husband, who gave me the opportunity to write full-
time.
John, mega thanks!
Sincere thanks also to Natalie G. Owens for her expert editing.
Thank you both
!

They say my father was mad
, so corrupted by evil and tainted with sin that he did what he did. I came home to find them all dead; their
throats had been savagely cut.

My sisters, only five and eight, were gone, as well as my brother who was twelve. My mother too lay butchered in her marriage bed. The bed her children were born in.

I discovered him first—in the sitting room lying in a sea of crimson, the bloody razor still clutched in his hand.

How pitiful I must have looked, bent down trying to wake him. Calling to him over and over, “Papa please, please wake up!”

He could not, of course, waken. No more was he to open his eyes in this world—had I not been struck mad, I would have realized.

Yet, madness is sometimes a mercy when shadows come to take the horror away.

Do not pull away in terror, please. I have much to confess. Just be patient, for I promise I will tell you everything. The only thing I ask in return is for you not to judge me until you hear my entire story.

If I recall that dreadful night
,
I remember it in confusing images and noise. People came and went. Gentle hands touched me, trying to soothe away the shock and agony—voices too, hushed and sad, told me things I could not understand.

I probably said that, though I can’t be sure. Lucidity was not my strong point that night. I do recall someone carrying me out of the house to a neighbor’s house.

We lived in Notting Hill then, having moved from Mayfair after my father’s illness—more about that later.

The house was on Blenheim Crescent, a respectable house in a respectable neighborhood. Despite this, the grander environs of Mayfair were much remembered and longed for by my mother especially. My mother, who now lay caked in blood in her disliked rooms of Notting Hill.

Dr. Arliss? Our physician. Was he there?

“I am sorry Rose, but you must go with them.”

People can’t be left around screaming, you understand.

I was silenced by strong hands. “Come along, miss. That’s better.”

I hadn’t the sense to ask where I was being taken. All I can remember is being removed from my neighbor’s home.

I couldn’t very well stay in my own home surrounded by the blood-splattered corpses of my murdered family, now could I?

They half dragged me down the stairs and out into an icy rain.

A woman reached for me. I did catch sight of her face; she looked serious but not unkind. “Come along now, dear.”

Dear, that was nice. I do believe I thanked her. Well
,
I wasn’t right in my head was I?

“Where are you taking me?”

So polite, a soft refined voice heard at church socials. But not me. Churches and I never mixed. Of course, I would regret that.

“Harry, go get the restraints!”

Restraints? It doesn’t affect me but that’s because it’s nothing to me
.
I’m not really there, you see. Well, not all of the time.

I must explain something. These first hours following the carnage were a blur to me, really. I have only understood things over time. But that is better as I can tell you my story more clearly.

I dozed, I think. Well, there was a pinch on my arm earlier and Dr. Arliss telling me he was giving me something to relax me.

The wagon moved—clip clop down the streets for an indeterminable time, but then it stopped. A door opened and other arms reached for me.

They were taking me into a building of some sort. “What is this place?”

I’m not sure if I asked that question, if I was able to. But if I was, I know I didn’t receive an answer.

Someone had me under the arm, one of the men from the wagon. “It’s alright.”

Why was everyone telling me it was alright when it was the worst time of my life?

We stepped inside a vestibule. A woman looked up from a high desk, not at me but at the man who was still holding my arms. “Name?”

He took out a piece of paper, glanced at it and said, “Rose Baines 22 Blenheim Crescent, Notting Hill.”

“Oh! A lady are we, dear?” I start to answer but her words drowned me out. “Right, put her in with the rest of them.”

This was when I started to feel fearful. The rest of them? That didn’t sound nice. I needed help—had I been arrested? They didn’t think I did it, did they?

I started to struggle, which was the worst thing I could have done.

“Now stop that at once!”

I cried out. “I am innocent please help me!”

They dragged me away then. And as they did, I got a whiff of ether and disinfectant.

Was I in a hospital? Maybe that was good. It was better than being in a prison!

But why
,
if it wasn’t a prison
,
did I see a massive gate just ahead
,
in the very direction we were heading for?

And then
,
a surly face
,
along with clanging keys and the sound of locks being opened
,
completed the scene.

It was a smallish room, more like a cage than a room—far too small for all of the sad humanity that populated it. A sea of the most miserable and pathetic faces greeted me. Some
held
their sides and rock
ed
back and forth, others
slept or cried
. One or two were crouched against the scummy walls
,
muttering to themselves.

The realization hit me. They thought me insane!

I cried out but no one came. “Please, someone!”

The pathetic creatures I found myself with began to repeat my cries. They didn’t do it to mock me I’m certain, but it was horrible anyway.

At last I was quiet. I couldn’t stand their shrieking and if that wasn’t bad enough, some of them were filthy and smelled of the street and the gutter.

I was there for a long time I think, crying quietly and dozing, too. An attendant came around a few times
,
mostly to look in at us and saunter away, immune to our protestations or questions, mine included.

I did finally sleep deeply. I don’t know for how long; all I know is that there was the unmistakable sound of jangling keys and the realization that the door had been opened.

I picked my head up off of the filthy bench to see who had come in. It was a
gentleman
,
that
was obvious. He look
ed
over each of us. A burly man accompanied him. They kept whispering to one another.

When he got to me, he raised the torch into my face. I put my arm up for the light was blinding.

“No dear,” he said gently, moving my arm down. “I just want to see your face.”

I almost asked him why. I think now
,
looking back on it, I should have—things might have been different if I had.

As he was holding the torch aloft, I could just make out his even features. His expression was kindly. “I am Dr. Bannion and I’d like to talk to you.”

I was unwell, confused in my mind, yet there are moments I remember well and this was one of them.

Before he led me out he spoke to the attendant. I am sure that was to ascertain whether she thought I’d be violent. Just to be on the safe side, she went along, her arms at her side but ready to go into action at any time.

Most of these attendants were big-boned and tall, and could have easily been taken for men.

It was a small room with a bench and some cabinets. It was filled with medicine bottles and books and things.

I sat on a bench alongside the attendant with the doctor facing us.

He began at once. “Now then! Would you prefer to be called by your surname or your Christian name?”

How singularly unimportant that was in the scheme of things. But I didn’t realize it then, I am certain I said I preferred to be called Rose.

He looked pleased when I spoke. “Well now, do you feel able to answer some questions, Rose?”

I quite liked his manner, as ill as I was
—
and I was very ill and confused a great deal of the time. But, I did like him because he sounded kind and caring. And because he did, I wished to answer all his queries. “I shall try.”

“Yes, that is all one can ever expect is to try.”

I noticed then that he nodded toward the attendant to take that as a sign for her departure. I was delighted.

“What can you tell me, Rose? You were away for the weekend, weren’t you?”

He was speaking to me and jotting notes down, too. I think I expected that.