Read The Hunk Next Door Online

The Hunk Next Door 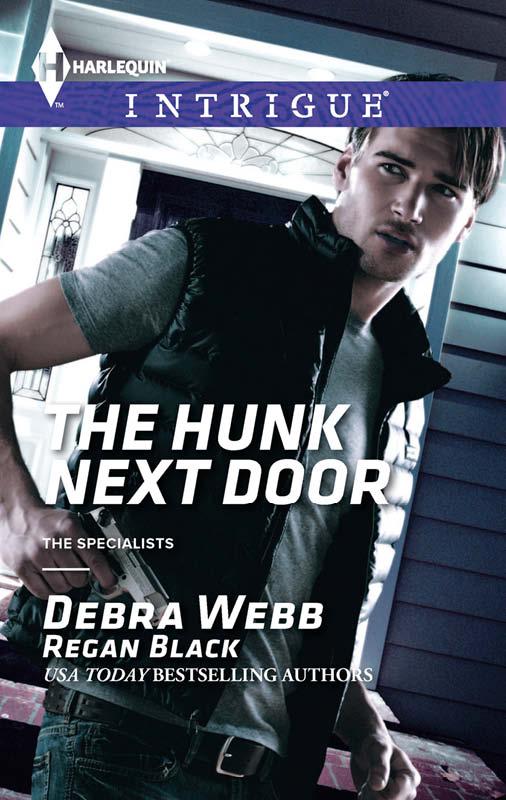 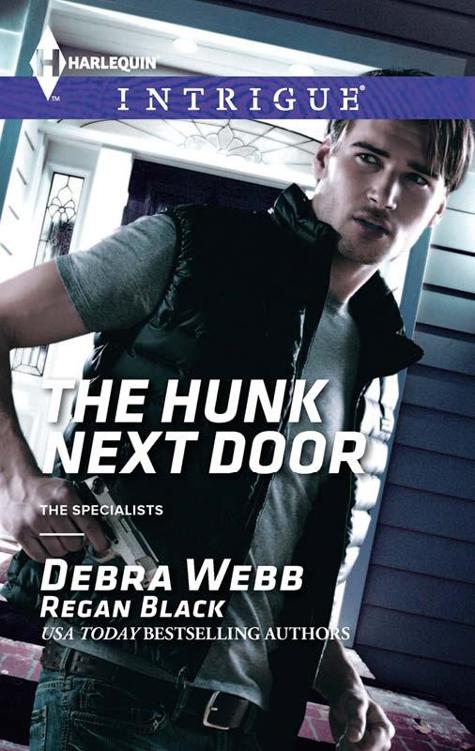 In the season of hope, someone’s out for blood. Police Chief Abigail Jensen is determined to protect her town—and avoid falling too hard for Riley, the new guy next door. But deciding who to trust can be deadly, especially when he has deep secrets.…

Agent Riley O’Brien’s mission is clear when he joins the CIA’s covert Specialist task force: protect a small-town cop from a terrorist, no matter what. Trading his identity for the undercover guise of a handyman is part of the plan…getting close to Abigail on a personal—and passionate—level isn’t.

Abby did. Desperately. The intensity scared her. “Aren’t you tired of Christmas lights and holiday displays by now?”

“Are you tired of police work?”

“A little,” she confessed, startling a laugh out of both of them.

“So I’ve been told.” Riley winked, opening the passenger door of his truck for her.

Yes. No.
Uncertain, she pulled the door shut. When he slid into the driver’s seat, she said, “I don’t want any games. I want you to be yourself.”

“Easy enough.” He stared at her for a moment that went on and on, and she realized she was holding her breath. “What you see is what you get, Abby.”

THE HUNK
NEXT DOOR

DEBRA WEBB, born in Alabama, wrote her first story at age nine and her first romance at thirteen. It wasn’t until she spent three years working for the military behind the Iron Curtain—and a five-year stint with NASA—that she realized her true calling. A collision course between suspense and romance was set. Since then the
USA TODAY
bestselling author has penned more than one hundred novels, including her internationally bestselling Colby Agency series.

REGAN BLACK, a
USA TODAY
bestselling author, writes award-winning, action-packed novels featuring kick-butt heroines and the sexy heroes who fall in love with them. Raised in the Midwest and California, she and her family, along with their adopted greyhound, two arrogant cats and a quirky finch, reside in the South Carolina Lowcountry where the rich blend of legend, romance and history fuels her imagination.

Riley O’Brien—
One of Thomas Casey’s elite Specialists, he goes undercover to protect Chief Jensen from a pending terrorist retaliation.

Thomas Casey—
The director of the Specialists has one last task force to assemble as he nears retirement.

Martin Filmore—
As the current president of the Belclare historical society, he is concerned Chief Jensen’s new security measures will ruin the annual Christmas Village.

Deke Maynard—
An artist bordering on reclusive, Deke moved to Belclare three years ago and has had his eye on Abigail, fostering a friendship with the potential for romance.

For Mark, my personal hero, who always knows when I need encouraging words, quiet space or dark chocolate. And many, many thanks to Deb for inviting me into this wonderful new adventure!

To my hero, Nonie! Though four decades have passed since we first met, you continue to be the only hero for me!

Thomas Casey, director of the elite team known as the Specialists, leaned back in his chair and watched the footage filling his computer monitor one last time. The woman on the screen stared directly at the camera, her expression one of fearlessness.

“Let this be a clear message to anyone with criminal intent,” she announced in a steely tone. “Belclare will not stand for drug activity on our docks or criminal action in our town. We will stand against you and we
will
seize your product, your people and your money at every opportunity. No matter your affiliation or intent, this community will not be used for illicit gain.”

The knock on his closed office door was a welcome distraction. Thomas muted the feed. “Come in.”

The beautiful face of his wife, Johara di Rossi, peered around the door. “Is it safe to come in?”

He motioned her forward. It was still a thrill to realize they were married, that he had the rest of his life to make up for lost time. No one had ever made him feel that way...no one but Jo.

Her smile wide, she stepped into the office. “If you’re sure. Your face tells a different story.”

Removing his glasses, he rubbed the bridge of his nose. “Am I running late?” He checked his watch, wishing he had the luxury of forgetting this video in favor of the standing dinner date with his wife. But when the President of the United States issued a directive, department heads were expected to drop everything and act immediately.

“No.” She strolled across the room and leaned over his desk to give him a kiss. “I was out this way and thought we could ride to dinner together.”

“That’s fine. I just have one last meeting to take care of first.”

A knock at the door interrupted him. Damn. One of these days very soon he intended to make personal time a priority.

Jo winked at him. “I’ll wait for you at reception.”

“Thanks.” He watched her go, grateful he’d been given a second chance with the one woman who mattered and that she understood the urgency of his work.

Ever the professional, Jo didn’t exchange a word with the man in a charcoal-gray suit who walked in as she walked out.

“Close the door,” Thomas said to his visitor. “And take a seat.”

Specialist Riley O’Brien followed both orders with a quiet “Sir.”

Thomas looked from the image of the Belclare police chief on his computer monitor to the man sitting patiently in front of him. “I appreciate your quick response.”

Thomas hesitated. One more sign that his decision to retire was the right one. A man in his position couldn’t afford to regret the tasks he assigned, but what he needed from O’Brien was extreme even for a Specialist.

He pushed away his own bias, pushed aside the memories of his own career and focused on O’Brien. All of his Specialists excelled in the obvious areas necessary for a successful covert operative, and each of them had a unique set of skills. It was O’Brien’s distinctive résumé that made him the perfect fit for this operation.

“O’Brien, you’ve been selected as the first agent for a new task force. Before you agree, let me assure you, you can turn this assignment down without penalty.”

The younger man settled a little deeper into the chair, his eyes intent. “Understood, sir.”

Already, they both knew he would agree. Thomas leaned forward, bracing his forearms on his desk. “I’m asking you to take on a deep-cover assignment. We will rework your background accordingly. You’ll keep your name, but your new address will be Belclare, Maryland.”

“On the Chesapeake Bay?”

“You’ve heard the latest news out of Belclare.” Thomas turned his computer monitor around for O’Brien.

Thomas concurred. “This new team is tasked with embedding agents on long-term assignments where threats are expected.”

“None.” Thomas cleared his throat. “In the short term, you are assigned to keep the Belclare police chief, Abigail Jensen, alive.”

“You believe retaliation is imminent?”

“Yes. She’s done a hell of a job, but she’s made herself a target. They might come after her directly or they may attack another target in town to cause trouble first. It could be next week, or next year, or...”

“A decade down the road,” O’Brien finished for him.

“Yes.” On a sigh, Thomas leaned back into the supple leather executive chair and studied the agent on the opposite side of his desk. “Based on the intel, I feel confident you’ll see some action right away, but this is a lifetime commitment I’m asking for.”

“All right.” O’Brien shifted forward, propping his elbows on his knees, his gaze on the floor. “Any backup?”

“Not on the ground.”

O’Brien lifted his gaze to Thomas’s. “Can you be more specific?”

Fair question. “You’ll have a way to upload any relative intelligence to our analysts, but I expect you to take action as necessary to protect our nation’s interests against terrorism. We can give you anything you need. We just can’t be
there
in under an hour.”

“Belclare is too close to D.C. and other valuable targets,” Thomas went on. “We’ve heard disturbing chatter about a sleeper cell in the area.”

“What kind of cause?”

While that wasn’t a question he would typically answer, this wasn’t a typical assignment. “The drug shipment the chief intercepted was meant to fund a known terrorism splinter group gaining a foothold here in the States. Homeland Security has been monitoring Jensen’s email since the speech went viral. Some of the hate mail is too specific for an outsider. Additionally, we’ve tracked a recent shipment of stolen military detonators to Baltimore.”

Throughout his career, Thomas had led by example, never asking more of his agents than he asked of himself.
Until today.
Looking across the desk, he put himself in O’Brien’s shoes and wondered how he might have responded if he’d been offered a similar assignment in his early thirties. “Take your time, O’Brien. Think it through.”