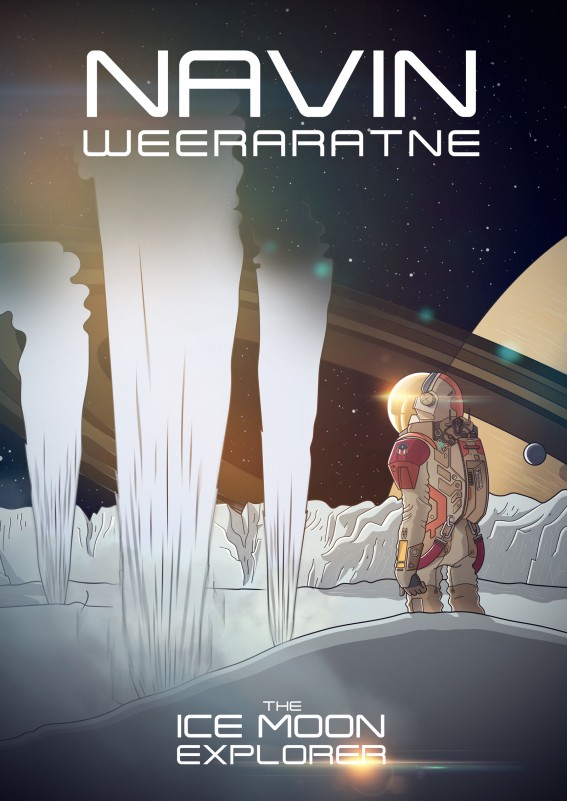 Thank you for downloading this ebook. You are welcome
to share it with your friends. This book may be reproduced, copied
and distributed for non-commercial purposes, provided the book
remains in its complete original form. If you enjoyed this book,
please return to your favorite ebook retailer to discover other
works by this author. Thank you for your support.

"Pilot, where did Titan go?"

The Ice Collecting Explorer's (ICE) scoop was
fully unfurled. I looked through its translucent membrane. It had
been clear as clingwrap (which it was related to) in the morning.
Already, it was fogging with micro particles of ice and silt.

"Titan?" said the computer. "Titan is right
where it is, lady."

A red square appeared on the smart glass
cockpit. It caged a large dot of light.

"Yeah but it can't be there," I pointed. I
looked at the time. "Shouldn't it be still behind Saturn?"

"Yes but how come? Titan's orbit is sixteen
days."
"I don't know man. Why is the sun less bright? Are there cats? Why
do only assholes wear Fedoras? You just leave the orbital mechanics
to me, and you worry about the icy moon geology."

Images from Enceladus Observer were on screen
(two decades and that probe was still ticking). Enceladus was
streaming ejecta into space like a hundred oil well fires.

"How many geysers are we up to?"

"Eighty three in the last pass," said Pilot.
"Judging by plume volume, the eruptions will last a few more
days."

"For our mission, yes. Talk about right place
and the right time."

There was an ocean under Enceladus. As it
freezes, it gets smaller. Its forty kilometer ice shell cracks, and
fissures form. Enceladus's core heats the ocean, which drives water
up those fissures. It blasts into space, some returning as snow.
The rest orbits for long as ten million years. It'll snow slowly,
down on Tethys, Dione, and Rhea. It's been happening for eons:
Saturn's E-Ring is a giant, frozen, ocean sample.

"We can send the lander to collect the
heavier matter."

"Let's wait till the snowing is finished. I
don't want to dig it out again." You'd think digging out my car
after a blizzard wouldn't be a thing a billion kilometers from
home. Shit work. It's why we still have a crewed program.

"Life," said Pilot. "Lots of high heat
silica. Bacterial fatty acids. It's traumatic down there - we even
have shredded DNA."

Far away and locked under ice, we had
expected Enceladans to be unique. They should have been a different
pathway of life, altogether. Instead, they were related to us. This
meant a common origin. Did Earth-Mars meteorites seed Enceladus
like they did each other? How did they punch through the ice? Or,
had simple life already spread through the cluttered early solar
system? Perhaps DNA was older than the Earth.

"Maybe we should do a sort first, separate
fresh ice from older, E-Ring matter."

"This ice is
right out
the geyser.
These are the purest samples we've
ever
had. Why are you
even suggesting contamination? Camping for an eruption, was your
idea."

"I just don't want to take any chances."

"Well, we'll have half a ton of ice once this
is done. Kapoor can take his time checking it. I'd rather not wait
eight weeks to see what's alive down there. We can set up the
bioreactor, today. Tomorrow, we'll have plankton and wrigglers to
look at."

"If there are too many wrigglers, they'll eat
all the jellies and plankton. You'll just have a dead aquarium in a
few days. I'm not the one who has to clean it out." The threat of
shit work.

I pulled up a status on the bioreactor. It
was a chamber that could duplicate conditions in the ocean's
different biomes. It needed chemicals, but I had stocked up before
leaving Carolyn Porco Station.

"We have enough magnetite. If the wrigglers
become a problem, we can add a bit. That will inhibit them. It
should be enough till we make it back to Porco."

It was, as things usually are in a small
spaceship, uneventful. I followed Florida's climate refugee crisis
on NPR, 79 minutes late. Vajra Kapoor checked in from Telesto, he
was delighted with ICE's progress. He'd finished designing a new
aquarium drone that never needed to surface. Maggie Liu (off mining
Helium 3) called it his Worm Spy Cam. Worms were the apex of life
on Enceladus. Worms and leeches - these days at least. The past had
been quite different.

"I've got this," said Pilot some hours later.
"You should take the rest of the day off."

"Yeah. And you're tired. You're starting to
make mistakes."

I looked at the time. We'd been working
twelve hours, straight.

"Alright, you finish up then. I'm going to
the Village to have a beer with my son."

"Did you hear about Van Prooijen? Got crushed
to death by a rover. Family doesn't want to speak to him
anymore."

The Voyager Three was a dimly lit bar. Yellow
and blue, Tron-style light strips trimmed the bar and tables. An
Europa driller nodded to the Syrian-German punk music. The Halley's
Comet miners watched baseball on a large TV, 79 minutes late.

"His job I guess," Kapoor ate some peanuts.
"What else is there for him? Mars is well automated, he'll be fine.
Christina Henkel has taken him under her wing."

"How many people want to hang out with a dead
guy?"

"I don't care if they're dead or not. They're
still people."

"Tell that to their families. You can't bury
someone, and then log in and say 'hi'."

"They should get used it. Any serious
planetary scientist is going to outlive their body. If you're
beyond the Moon, you've got a high fidelity copy in the
Village."

Above the counter, a huge TV showed a
monster. It was a car-length worm, but with six fins. Two were
alongside its lamprey mouth, like canard wings on a fighter. It
investigated the camera, drawn by its searchlight. Black pits
covered its face: nostrils. Blue ink squirted from a nozzle in the
corner of the image. The monster waved off, like it had smelled a
really bad fart.

"I've not seen that before."

"Oxygen," Kapoor grinned. "Just a wee bit
dissolved in, with some coloring. I figured since it's so toxic to
them, they'd be able to sense it. That worm shark won't be
back."

Kapoor shrugged. "It works. And my cam drones
don't get eaten anymore. It must be something they learned to sense
a long time ago. Like how everything on Earth avoids hydrogen
sulphide."

"The whole natural history of Enceladus is
just germs, jellies, and worms," I pointed at the screen, "And then
these buggers show up. Suddenly it's like a tropical rainforest
down there. And then, in a hundred million years, we're right back
to jellies."

"The Golden Age was their Cambrian
Explosion," Kapoor kept his eyes on the screen. "Life on Earth also
took ages to do anything interesting."

"But it stayed interesting."

"Earth is a better place to survive asteroid
impacts than Enceladus. Whatever hit there -- Maggie has found
ejecta, as far out as Ymir. Golden Age debris sticks out in this
system, like a bruise under make up."

"Yeah, I'm keen to see your latest. If those
geysers bring up tissue from anything large and interesting, I'll
find it. Clone it. Stick it in a tank."

"For someone once quite upset by the shared
biochemistry, you seem pretty keen on it now."

"We'd have learned more on how Life itself
emerges, if their biology was unique. I
am
annoyed about
that. Look at how wrong we were about solar system formation? Until
we could detect and study exoplanets, we had no idea. Biology has
the same problem. We need to find different
biologies
."

"Again, you don't seem overly annoyed that
you haven't."

"Look at
this
," he gestured to the
screen. "How can someone stay annoyed? Because they're our cousins,
we get to bring them
back
. It's just DNA. I can use the same
de-extinction tools I would on Earth. Any water world with low
enough gravity, will have its natural history preserved. It'll be
frozen in orbit, or returned as snow. Solar radiation out here is
lower. Water ice helps protect against radiation, too."

"What about Europa? We might well have unique
life there."
"Fuck Europa. If John Dobbs wants to live to see results, they'll
have to use nukes."

"I heard Dobbs suggested sleeping through the
drilling. Just waking up whenever anything goes wrong. Ten years,
tops."

We could all do that, sleep for months, even
years. You didn't make it past Mars without hibernation nanotech in
your blood. Mental health wasn't the problem: the Village solved
that. It was just too expensive being an active passenger.

It was all quite advanced now. The ship or
station AI would handle the details for you. You could sleep for a
month, and feel like you power napped.

"See? See how ridiculous it is? And they're
right there, in Jupiter's radiation belt. They can't even wear a
suit and walk around. A day's worth of EVA on Europa, is a
radiation death sentence. No, I'm thinking about beyond. Far
beyond."

"Exactly. Sure, Enceladus is contaminated.
But what about the Kuiper Belt? That's more than five times
Saturn's distance from the Sun. There's no chance of contamination.
And there are thousands of Plutoids out there,
thousands
of
worlds."

"But not planets," I said quickly.

"Thousands," he dismissed me with a wave.
"How many have liquid water, under the ice? Geysers will form as
they freeze. Even if the oceans die, the snow and ejected ice will
keep perfect records. Enceladus is just five hundred kilometers in
diameter, and has life. Sedna is a
thousand
. The Sednoids
may have been captured from other stars. [2] We could study life
from another star, right here in our solar system."

Silence. On screen a tumbleweed rolled by:
glowing jellies entangled by their own tendrils.

"You seem very comfortable thinking that far
ahead. That could be a hundred years from now."

"Vajra? You okay?" maybe it was just lag.

"Hey, like you said," unfreezing. "We're
going to outlive our bodies."

My son never showed. Instead, I received this
message:

Sorry I can't make it today. Something
unexpected has come up. I'm going to be out for a few days, maybe
longer. It's mission related. I'll see you as soon as that's
done.

He had never bailed on me before.

The Next Morning, Saturn's E-Ring

Another day aboard ICE.

"Morning, Pilot," I got on the treadmill.
Muscle wasting in zero G was still a problem we hadn't solved.

"What's up? You sound a little down."

"Uhuh," It was hard hiding things from Pilot.
Mental health monitoring was core to long-duration mission design.
"Did you meet your son yesterday?"