Read The Impossible Cube: A Novel of the Clockwork Empire Online

The Impossible Cube: A Novel of the Clockwork Empire 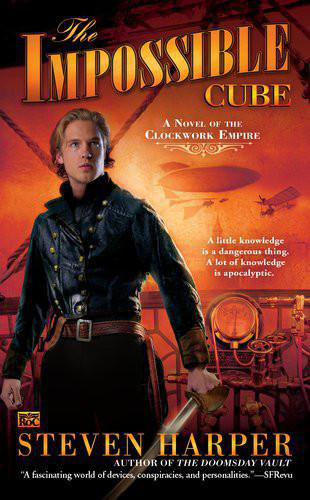 Praise for
The Doomsday Vault

“Harper creates a fascinating world of devices, conspiracies, and personalities. . . . Alice and Gavin fight to survive and to find love in this steampunk coming-of-age story. Harper’s world building is well developed and offers an interesting combination of science and steam.”

“You’ll have great fun exploring the Third Ward, and the author created such a rich and lavish world for his characters. . . . Twists and turns abound, and the author managed to lob some shockers at me that I’ll admit I didn’t see coming. . . . If you love your Victorian adventures filled with zombies, amazing automatons, steampunk flare, and an impeccable eye for detail, you’ll love the fascinating (and fantastical)
Doomsday Vault
.”

“
The Doomsday Vault
is a good way to start off a new series in a highly specialized genre. Its combination of science and fantasy and good versus evil work well . . . a clever and worthwhile take on the steampunk universe.”

—That’s What I’m Talking About

“A fun and thrilling fast-paced adventure full of engaging characters and plenty of surprises. . . . I particularly enjoyed all the interesting and unexpected twists that kept popping up just when I thought I had the story figured out.”

“The great thing about having all these awesome characters is that [they’re] all snuggled up against a really great plot, several intermingling subplots, and pretty dang great steampunk world building. And excellent writing. . . . [
The Doomsday Vault
is] fun, funny, and a damn fine romp of a read.
So
much goodness packed into this book! Highly recommended.”

“Paying homage to the likes of
Skybreaker
,
2D Goggles
, and
Girl Genius
,
The Doomsday Vault
is
awesome
. One of my favorite steampunk-zombie novels. Abso-freaking-lutely recommended.”

THE
I
MPOSSIBLE
CUBE

A N
OVEL OF THE
C
LOCKWORK
E
MPIRE

To my son, Aran, who always manages the most amazing
surprises. Every day with you is a wonder.

I need to thank Tim Smith, PhD, of the University of Michigan, for information about the workings of electrical turbines. Thanks also go to the Untitled Writers Group (Christian, Cindy, David, Diana, Erica, Jonathan, Mary Beth, and Sarah) for pounding through so many drafts.

THE STORY SO FAR

W
e include this section as a courtesy for new readers who did not have the opportunity to peruse
The Doomsday Vault
, the most excellent first volume in this series. The information may also prove useful to experienced readers who require a bit of a refresher, or who lack a mechanized cranial implant with fully realized library. Thoroughly experienced readers are encouraged to leaf their way over to Chapter One, where they will find Gavin Ennock in awkward and perilous circumstances.

Nearly one hundred years earlier, a new disease ravaged the world. The plague causes rotting of flesh, and also invades the host’s nervous system, causing motor dysfunction, dementia, and photosensitivity. Victims lurching through the late stages inevitably became known as plague zombies. However, a handful of victims end up with neural synapses that, for a brief time, fall together instead of apart. Advanced mathematics, physics, biology, and chemistry become as toys to them. But as the virus slowly destroys their brains, they eventually lose their grip on reality. Their attachment to mechanical inventions and their detachment from normal human emotion earned them the name clockwork geniuses or clockworkers, and the disease itself became the clockwork plague.

Two nations—England and China—built opposing empires using the fantastic inventions supplied by captive clockworkers, and only the delicate balance of power holds the two empires in check.

In
The Doomsday Vault
, we encountered Alice Michaels, an impoverished woman of quality who had finally caught the eye of wealthy industrialist Norbert Williamson. Norbert promised to pay Alice’s family’s debts if she married him and provided their eventual child with a title. Alice reluctantly agreed. Mere hours later, she rescued from great danger a handsome young street musician named Gavin Ennock.

Before Gavin met Alice, he served aboard the American airship
Juniper.
An unfortunate encounter with pirates left him stranded in London with no means of employment save playing the fiddle on street corners. After Alice’s dramatic rescue, Gavin found himself attracted to her, and she to him, but her circumstances and his social standing didn’t allow for a romance.

A great many adventures followed. Alice’s aunt Edwina turned out to be a clockworker. Plague zombies attacked London. A great mechanical beast kidnapped Alice, and Gavin rescued her with the help of a mutated walking tree designed by another clockworker. Gavin and Alice learned of a shadowy organization called the Third Ward. The Ward, led by Lieutenant Susan Phipps, has been charged by Queen Victoria herself to scour the world for clockworkers and bring them back to London, where they build inventions for the good of the Crown—and the detriment of the Orient.

Aunt Edwina’s diseased mind created a pair of
cures for the clockwork plague, but such cures would upset the careful balance of power between the British and the Chinese, so the Third Ward locked Edwina’s work in the Doomsday Vault, which houses only the most dangerous of inventions. Infuriated, Edwina infected Gavin with the plague in hopes of forcing Alice to retrieve the cure and, in the process, kill everyone in the Third Ward. Edwina’s plan worked—almost. Alice and Gavin stole the cures, but stopped short of murder.

Aunt Edwina did not survive the release of her own airborne cure, and Alice found herself the disconcerted owner of a mechanical gauntlet that can cure the clockwork plague with a scratch. Unfortunately, neither of Edwina’s cures helps clockwork geniuses; they only cure people in danger of becoming ordinary plague zombies.