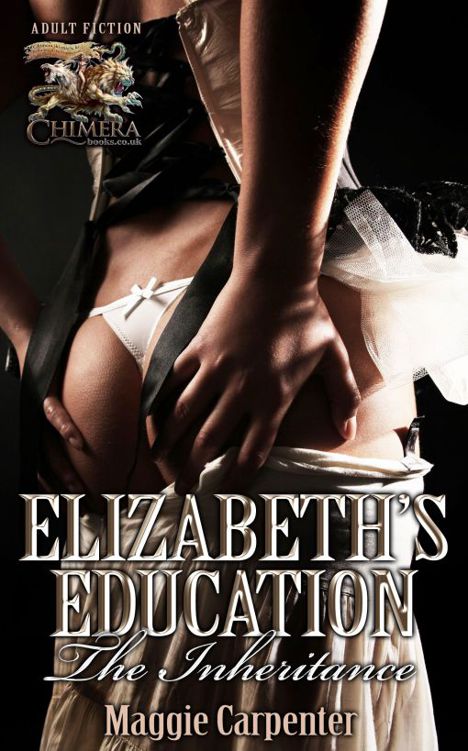 Elizabeth's
Education the Inheritance published as an eBook in 2012 by Chimera
eBooks.

Chimera (
ki-mir'a,
ki-
) a creation of the imagination, a wild
fantasy.

This novel is
fiction - in real life practice safe sex.

This eBook is
sold subject to the condition that it shall not, by way of trade or
otherwise, be lent, resold, hired out or otherwise circulated
without the publisher’s prior written consent in any form of
binding or cover other than that in which it is published, and
without a similar condition being imposed on the subsequent
purchaser. The characters and situations in this eBook are entirely
imaginary and bear no relation to any real person or actual
happening.

Copyright
Maggie Carpenter. The right of Maggie Carpenter to be identified as
author of this book has been asserted in accordance with section 77
and 78 of the Copyrights Designs and Patents Act 1988.

A Final
Farewell & A Happy Hello

A
Commemoration & A Christening

It had been a
year of mixed blessings for the Barrett Household. Six months after
Lord Michael had placed the gold collar around Elizabeth's neck her
mother lost her battle with an illness she had been fighting for
many years. While it was a relief that the poor woman was no longer
suffering it was a loss felt by all in the household. Lord Michael
had been a tower of strength to them all, especially his precious
Elizabeth.

Even before
the tragedy he had been considering the purchase a house near the
Barrett estate. Attempting to steal time with Elizabeth when he
would visit, or find some pretence upon which to whisk her away for
an hour here or there during her visits to the city had became
unacceptable and awkward. In the weeks after her mother died it was
virtually impossible for Elizabeth to travel to London at all. This
became the deciding factor, and Lord Michael began to make discreet
inquiries about properties that might be available in the area.

To his great
fortune he discovered a stately manor in need of a quick, private
sale. The elderly owner was near death and anxious to sell so as to
have the cash to distribute to his family personally. Lord Michael
made an arrangement allowing him to stay in residence until his
passing, and provided him a handsome sum for its purchase. The old
gentleman left the world just a month after the transaction was
complete and Lord Michael took possession.

So it was with
greater ease that he was able to spend time with Elizabeth. She was
thrilled that he had a residence nearby, in spite of the fact that
his business in London was quite demanding and it was only during
the weekends that she would see him. It was on Friday that he would
arrive in his handsome carriage, and Monday, early in the morning
that he would depart.

There were
times, though infrequent, there would be a lull mid-week. He would
show up unannounced, swooping down on the young woman, capturing
her for an afternoon of hedonistic pleasure before swiftly
returning to the city. Those were his favourite moments.

She was always
quite prepared for him on the weekends. Dressed perfectly, in an
excellent frame of mind and happy to see him. His unexpected
arrival had sometimes found her not so gay and with a little less
attention in her appearance, or James, her brother, may have
scolded her, putting her in a dour mood.

He found such
times eminently appealing. Administering a much deserved spanking
and reddening her pert round bottom relieved the stress of his
week, and his strict justice saw her even happier when he arrived
back at the weekend.

The purchase
of the house and his consistent presence at the Barrett estate was
the best medicine available to help Elizabeth through the difficult
weeks following her mother's death, and relieved her father from
some of the burden, allowing him to have his own time to mourn the
loss of his beloved wife. James also benefited from Lord Michael's
presence. He would accompany him for trudges through the fields, or
go shooting in the early morning. It did not take long for Lord
Michael to feel almost as though he was part of the family.

Elizabeth and
Lord Michael had become a pair. A couple. It was the considered
opinion of the Barrett house that it was only a matter of time
before he would make an honest woman out of her, and a ring would
be slipped upon her finger.

Dressed in a
fine lilac gown ordered from Paris and brand new pretty cream shoes
peeping from below the hemline, she felt like a Princess. Grace had
done a masterful job with her hair, and perfectly perched to one
side was a diamond studded comb left to her by her mother. It now
belonged to Elizabeth and was one of her most precious
possessions.

She felt a
little sad as she gazed at the glittering stones. It had only been
the last two months that she had begun to feel like herself again,
though there were still days a wave of sorrow would call,
surprising and uninvited. Lord Michael had been an absolute Godsend
through it all, and she wondered how she would ever have survived
without him.

Her father had
thought the purchase of the dress and shoes rather extravagant, but
he knew the evening was the celebration of Lord Michael having
courted Elizabeth for a full year, and had high hopes that this was
the evening Lord Michael would finally ask his only daughter to
walk down the aisle. After all, she was nineteen and not getting
any younger. He firmly believed it was time Lord Michael stepped up
and did the honourable thing, and the fact that he had bought
Milner Manor had been most encouraging.

To Elizabeth's
delight a tradition had formed. On Friday night Lord Michael would
stop by the house for a brief visit. He would have a brandy with
her father and James, then spend a little time with her in the
drawing room while she played the piano, for which she had a unique
talent.

The following
morning he would return and take her for a walk through the
estate's beautiful gardens, then stay for lunch. The afternoon he
and James would go shooting or indulge in some other manly activity
which drove Elizabeth quite to distraction. Sundays were much the
same, with the evening culminating in the family dining at Lord
Michael's residence.

Saturday
nights however, with the blessing of Elizabeth's father, he would
have Elizabeth and James over for dinner. James, ever grateful to
him for having reformed his recalcitrant sister, had no issues with
making himself scarce immediately the meal was over.

James was
aware of Lord Michael's authoritarian ways and shared his
enthusiasm for the ongoing discipline of naughty women. He found
there was nothing quite so satisfying as spanking a contrary
female's bottom. As far as he was concerned, lack of manners or
inappropriate behaviour warranted such correction.

Elizabeth had
certainly been a candidate from an early age but he knew his father
would never have allowed him to correct her in such a manner. Just
a sound scolding would cause his father to suggest he not be so
hard on the girl. Lord Michael's arrival and intervention could not
have come at a better time. Elizabeth had become impossible and he
was at quite a loss as to how to handle her. His father certainly
had little, if any control. And his mother, having been ill for so
many years, simply did not have the wherewithal to deal with the
precocious girl.

Lord Michael's
corrective measures had given validation to James' deeply held
beliefs. Her deportment and behaviour had been exemplary. On the
odd occasion when the spoiled Elizabeth would threaten to
resurface, all James had to do was mention that he would be sure
and pass along her pending tantrum to Lord Michael, and his sister
would pout for a moment, take herself to her room and magically
return with the correct attitude.

He often
wondered, after saying goodbye to Lord Michael at the end of one of
his visits, just how red Elizabeth's bottom was under her dress,
and would watch to see if she shifted uncomfortably while seated at
the dinner table. Any discipline Lord Michael inflicted on his
sister was nothing less than she deserved. Lord Michael had his
most wholesome support.

So it was this
particular Saturday evening that Lord Michael arrived to take
Elizabeth into the village to dine at a very nice establishment to
commemorate their very special night. That it fell on a Saturday
Lord Michael found particularly auspicious. James would be joining
them to attend as Elizabeth's chaperone, and after their meal there
would be a visit to Milner Manor before Elizabeth was delivered
safely home.

As she floated down the stairs she heard her three men
talking. That was how she referred to them. Her three men. Her dear
father, her bothersome brother, and -
sigh
- Lord Michael.

"My dear," her
father said warmly, as she entered the room. "Don't you look
lovely. Doesn't she look lovely Lord Michael?"

Elizabeth
smiled her most charming smile. Though embarrassed by her father's
comments she was pleased he had brought his compliment to the
attention of her Master.

"Thank you,
father," she said coyly.

"She does
indeed," Lord Michael replied, knowing how much her father would
love to have him take Elizabeth as his wife. "Elizabeth always
looks lovely, but tonight especially so."

Elizabeth
beamed. She loved being the center of attention. In spite of Lord
Michael's very special attention that had not changed and they
could give her all the compliments they wanted. She glanced at her
brother, waiting for his words of adoration, her eyes insisting he
offer them. He did not disappoint her.

"Thank you,
brother," she said, sweetly.

"Would you
care for another brandy?" her father asked, turning his attention
back to his guest.