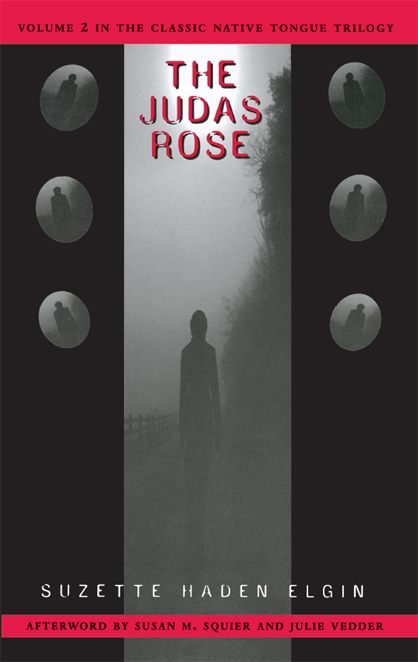 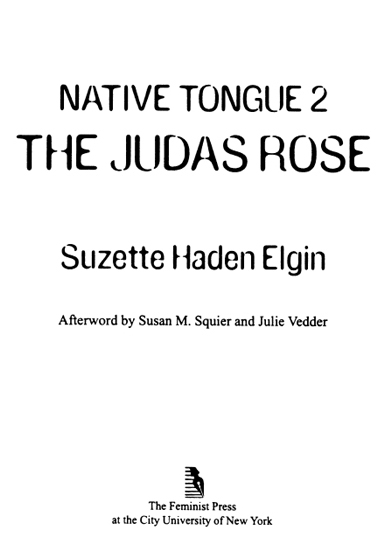 All of the characters in this book are fictitious. Any resemblance to actual persons, living or dead, is purely coincidental.

No part of this book may be reproduced or used, stored in an information retrieval system, or transmitted in any form or by any means, electronic, photocopying, recording, or otherwise without prior written permission of the Feminist Press at the City University of New York except in the case of brief quotations embodied in critical articles and reviews.

Some years ago, it was our great privilege to publish the novel called
Native Tongue
. So extraordinary did we find that privilege that we published the work as a book in paper, rather than in microfiche or chiplet. The book was more than simply unusual; it brought with it two mysteries. First, we did not know who its author was, only that it had been written by one or more women of Chornyak Household. Second, we did not know the name of the scholar who had safeguarded the manuscript; it was sent to us by messenger, and the brief note of transmittal was unsigned. We have no more information on either of those matters today than we did then. But we have new reason to be grateful to our unknown benefactor, because a second volume of the work has now been made available to us for publication.

Our publishing problems this time at first appeared severe. It had taken us ten years to secure the funds and the skilled workers to produce
Native Tongue
, and we had its uniqueness and its historical significance as forceful arguments of persuasion of its favor. This time our situation was very different. Of course, for those who had enjoyed the first volume, the new book would make pleasant readingâbut it could not be said to constitute a historic landmark. How, then, does it happen that once again we are able to put this work into your hands in realbook form?

The answer is another mystery; the only information we have is a few sparse details. Someoneâwe have no idea who, whether man or woman, linguist or layâmade it possible for the women of the linguist families to open a secret bank account and to contribute to it over the years. This was in the time when Terran women were legally not adults, and were allowed no money of their own except in the most unusual circumstances. Ordinarily they could have only small amounts of what was called “pocket
money,” doled out to them at the whim of their male guardians, to be spent for a restricted list of personal items such as candy or trinkets or household trivia. We are informed that the women saved tiny sums, perhaps by simply lying about what those personal items cost them, and were permitted to deposit those sums in the secret account through an unidentifed intermediary. The single purpose for which this fund can be used is to pay for the publication,
in realbook form
, of items described to us only as “the works of the women of Lines.”

We have been granted no access to the bank records. We do not know whether money continues to go into the account now that the situation of women is different, or what amount might remain as a balance. But even small sums, if left to gather compound interest over many years, can turn into substantial amounts of money, and there was enough to let us offer you this book.

(popular hymn, sung to the tune of “Amazing Grace”)

Heykus Joshua Clete, Chief of the Department of Analysis & Translation of the State Department's Foreign Service, winner of the Reagan Medal for Statesmanship, recipient of dozens of honorary degrees and countless awards and citations, father of
three and grandfather of seven, Senior High Deacon of the United Reformed Baptist Church, was a great bulky giant of a man out of rural southern Missouri. His many honors sat easily on his shoulders; he was six feet five inches tall, weighed two hundred seventy pounds, and carried not a single ounce of fat. His silver-white hair was cropped close in almost military fashion, so that his daily hour-long swim could be fit in anywhere, no matter how formal the occasions flanking that hour on either side. He allowed himself an elegant short beard that, like his heavy eyebrows, was gray flecked with silver; it hid a chin that to his mind was just the slightest touch weaker than the chin he would have chosen for himself. His eyes were the classic bright Missouri blue carried by durable inbred Scotch-Irish genes that were not ever going to give up; he was imposing, and distinguished, and in superb health. And he was feared. Not because he was cruel or vicious or wicked but because he applied to everyone the same inflexible ethical standards that he applied to himself. The fact that you were in dire straits when you committed some infraction of the rules would not impress Heykus Clete in any way whatsoever. Your previous flawless record of lifetime service to the government of the United States would not matter either. If you were seen in a bar in New St. Louis with a drink in your hand, and were subsequently seen by reliable witnesses to actually consume some portion of that drink, however small, you no longer worked for the Department of Analysis & Translation. That the D.A.T. regulation was a stupid one, there being no difference between bars on New St. Louis and bars anywhere else, made absolutely no difference to Heykus: a rule was a rule. And you would find yourself both unemployed and saddled with a censure notation in your government file.