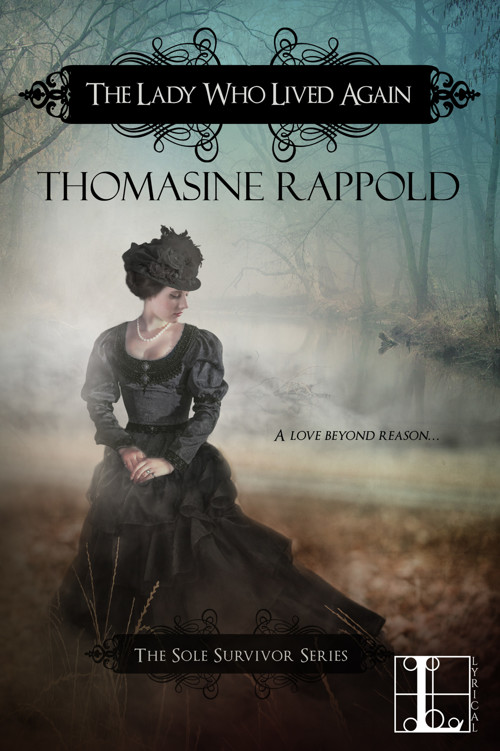 Madeleine Sutter was once the belle of the ball at the popular resort town of Misty Lake, New York. But as the sole survivor of the community’s worst tragedy, she’s come under suspicion. Longing for the life she once enjoyed, she accepts a rare social invitation to the event of the season. Now she will be able to show everyone she’s the same woman they’d always admired—with just one hidden exception: she awoke from the accident with the ability to heal.

Doctor Jace Merrick has fled the failures and futility of city life to start anew in rural Misty Lake. A man of science, he rejects the superstitious chatter surrounding Maddie and finds himself drawn to her confidence and beauty. And when she seduces him into a sham engagement, he agrees to be her ticket back into society, if she supports his new practice—and reveals the details of her remarkable recovery. But when his patients begin to heal miraculously, Jace may have to abandon logic, accept the inexplicable—and surrender to a love beyond reason…

For my mom, Lorraine DeBonis Mancino, whose love for romance novels lives on in me.

Thank you to my awesome agent, Stefanie Lieberman, for loving this story and for all your efforts in seeing it published. My deep appreciation and thanks to my editor, Paige Christian, whose keen eye and stellar skills helped make this a better book. To my wonderfully ruthless critique group, Bonnie, Chris, Colleen, and Jean, thank you for never blowing smoke and always giving it to me straight. I couldn’t have done it without you. Thanks to my daughters for their patience with a mom who spends half her time in an imaginary world. To my real-life hero, John, thank you for all your love and support, and for always having more faith in me than I have in myself. And lastly, my heartfelt thanks to you, dear reader, for sitting down to spend time with my characters. I hope you enjoy their story.

Everyone wished she had died with the others. Maddie Sutter had accepted this truth long ago. But much to the small town’s dismay, she insisted on living and breathing despite it.

Straightening her shoulders, she lifted her chin against the barrage of eyes watching her every move as she forged down Main Street. After three years of suffering this unwelcome attention each time she ventured to town, one would think she’d have grown used to the assault.

Maddie had resigned herself to many things since the accident, but she’d never adapt to the dread her presence induced in those she had known all her life—those who had once loved and cared for her.

With a fortifying breath, she approached a cluster of young boys on the corner. The same wretched imps had greeted her earlier when they’d spied her arrival in downtown Misty Lake. She braced herself for a repeat performance of the cruel rhyme they’d composed in her honor.

“Four dead girls on the slab, on the twelfth day of May. On Friday the thirteenth, one girl walked away.
”

Refusing to alter her course, Maddie strode straight toward them. Her lungs swelled with triumph as the alarmed little brats scattered like mice. With another fractional lift of her chin, she swept onward and rounded the corner.

She entered the general mercantile, the jingling bell on the door her only greeting as she stepped inside. Along with a handful of patrons, the store housed a hodgepodge of scents. Aromas of charcoal and beeswax mingled with the sweet smell of cinnamon and apples. Renewed by the boon to her senses, she enjoyed the whiff of fond memories that came with it. She shopped quickly, spurred on by the hushed whispers echoing through the aisles as she browsed the shelves.

Gathering a bag of sugar, a tin of baking powder, and the other items on her list, she headed to the front of the store, then placed them on the polished counter.

“Good morning, Mr. Piedmont,” she said with a smile.

He wiped his hands on his bibbed apron and took a step forward.

With a curt nod, he lowered his somber eyes to the items on the counter and began to tally her purchases.

Maddie’s smile faded, her mind drifting back to the days when Mr. Piedmont’s face would light up to see her and her friends bounding into the mercantile. The Fair Five, as they were known back then, had charmed everyone. The girls had hardly put away their pinafores when they first learned to use their collective wit and beauty to full advantage. The Five always left Mr. Piedmont’s store lapping at complimentary peppermint sticks, pressed upon them by the kindly merchant with a playful wink.

Mr. Piedmont worked swiftly, the sound of crumpling paper filling the awkward silence as he wrapped her purchases and bound the tidy parcel with string. By rote, his freckled hand reached to the nearby jar of candy. Placing a single peppermint stick on top of the bundle, he slid it toward her, then turned to face the shelves lining the wall behind him.

Tears blurred Maddie’s vision as she stared down at the red-striped treat, the simple reminder of who she once was—who she still was, if only one of her neighbors could manage to look her in the eye long enough to see it. She swallowed hard.

“Thank you,” she murmured to the shopkeeper’s back before he walked away.

Maddie left the store and proceeded to her final errand. As she’d anticipated, a letter from Amelia awaited her at the post office. Maddie would wait until later to open it. Their recent correspondence had rattled her to the bone, and she knew any public display of emotion would be ripe fruit for hungry local gossips.

Not that maintaining decorum could help her cause now. People already believed the worst about her. These rare trips to town only served to remind her that nothing had changed.

Shoving the letter into her skirt pocket, she headed south on Main Street. To her relief, the band of young hooligans that had taunted her earlier was nowhere to be seen. She hurried out of town nonetheless. Each dreaded trip was a tax on her nerves, and when added to the anxiety of what awaited in Amelia’s letter, Maddie yearned for the comfort of home.

When she reached the outskirts of town, she took the path through the woods that opened to a large field. She welcomed the sound of chirping crickets and birds. As always after she exerted herself with a lengthy walk, her leg was beginning to ache. She slowed her pace, then stopped to rest at her favorite spot on her grandfather’s sprawling property. Sitting on a felled birch log in the broad clearing, she stretched out her leg. The cramped muscles unfurled as she enjoyed the serenity of the surrounding forest, the gentle spring breeze through the swaying trees. The sun felt heavenly, and she lifted her face to bask in its glow.

She’d avoided town all winter, hibernating like a bear in a cave. She’d emerged from seclusion renewed by foolish hopes, but the first outing of the new season had been just like the last. A bear would be better received.

Maddie sighed in defeat, dug out the letter that was fairly vibrating in her pocket, and unfolded its pages. The bold strokes on the delicate cream sheets conveyed Amelia’s confident tone and dramatic style.

I received your response denying my request, but I refuse to take no for an answer. I simply cannot get married without you!

You swore an oath to one day serve as my bridesmaid, and it is time for you to honor it. My deep love and concern for you force me to hold you to your promise.

The past is the past, my dear friend, and you must lay it to rest. Eventually, the town will follow suit. Consider attending my wedding as your first step toward getting on with your life.

We arrive in Misty Lake in three weeks. I look forward to seeing you then.

Maddie’s breakfast turned in her stomach. How on earth could she attend? No one, save Amelia, wanted her there. Certainly not Daniel. The mere thought of facing her former fiancé and all the others who’d blamed and abandoned her…no. Maddie hadn’t the courage. Amelia didn’t understand. How could she? She was not present when it happened. Nor was she here for the aftermath.

Something rustled in the woods across the field. Squinting against the sun, Maddie scanned the trees. A deer hobbled into the clearing, took one final step, then collapsed to the ground. Maddie gasped at the arrow protruding from its shoulder.

Without a thought, she ran to the deer and dropped to her knees at its side. Blood flowed, a crimson stream from the gaping hole around the arrow. The trembling doe stared up at her, eyes wide with pain and terror.

Maddie glanced around to ensure she was alone. The arrow was a direct hit to the vitals, and the poor creature couldn’t have traveled far. Someone might be tracking it. Glancing into the deer’s desperate eyes again, Maddie tossed caution to the wind.

She grasped the arrow, clenching it as hard as she could. The blasted thing was in deep. Mustering her strength, she pulled, grunting as the arrow ripped through the torn muscle and flesh in which it was lodged. She fell backward, arrow in hand. Blood gushed everywhere. Tossing aside the arrow, she leaned over the deer and pressed her hands to the wound. Blood oozed between her fingers. Life drained from the deer, the warm flow filling her nose with the acrid scent of looming death.

She squeezed her eyes shut, swallowing against the bile rising in her throat. Behind her closed lids, pictures flashed in the darkness. The wagon careening out of control. The approaching tree. The bodies hurling through the air. Sounds of terrified screams filled her ears. Tears poured down her face as she opened her soul. All the pain, all the guilt, manifested inside her, raging through her veins. Heat radiated to her hands, transferring everything onto the dying deer.