Read The Language of Sisters Online

The Language of Sisters 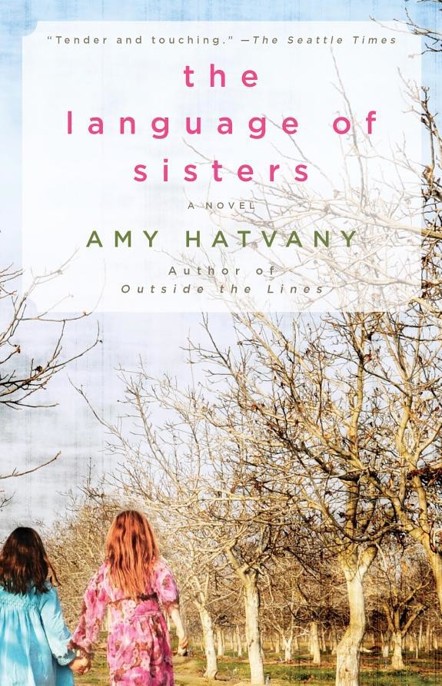 Thank you for purchasing this Washington Square Press eBook.

Sign up for our newsletter and receive special offers, access to bonus content, and info on the latest new releases and other great eBooks from Washington Square Press and Simon & Schuster.

The Language of Sisters

‘Outside the Lines’ Excerpt

I was at work when it happened. I had just finished folding pungent wild blueberries into the creamy muffin batter, thinking how the brilliant purple streaks that trailed each berry stood out like a bruise against white skin. I was about to fill the greased-and-readied pan when something stopped me. Something tangible, like the thump of a fist against my chest—I felt it. I felt my sister’s voice for the first time in years, the way I used to feel it when we were children, coursing through me like my own blood, hearing her thoughts the way no one else could. Can you hear a whisper in your heart? Across the miles, the years, through callused layers of resentment and anger and pain, can a voice as familiar to you as your own slice through it all and find you?
Help,
she said softly, and the muffin tin fell from my grasp and landed with a clatter on the concrete floor.

Barry’s head poked out from the dish room that punctuated the long, narrow kitchen in the back of the bakery. A heavy electronic drumbeat thumped in the air behind him, the radio tuned to the dance music station where his current boyfriend was an early-morning disc jockey. “Everything okay in there, champ?” Barry inquired, the familiar sight of his blond poodle-fluff explosion of hair and long, wiry limbs bringing me back from wherever I had been.

“Yeah, fine,” I said, grinning at him shakily, my heart still
resonating from the impact of Jenny’s voice, my mind racing to think what trouble she might possibly be in, why she could need my help badly enough for me to feel it hundreds of miles away.

Rubbing his large hands in the folds of a linen towel, Barry tilted the fuzzy tip of his goatee into his chest. “You sure, now? Not wishing you’d kept that fancy therapist’s gig?”

I shook my head and reached for a clean tin from under my workstation. “Nah. Just checking to see if you were awake,” I said, gesturing for him to go back to work with a wave of my hand. He acknowledged me with a tiny dish towel salute, then disappeared into his cave.

Grateful for the brief distraction from the worry that had risen within me, I refastened my defiant red mop into a ponytail at the base of my neck and got back to work, preparing the clean tin and filling it with batter. As I slid it into the shiny convection oven behind me, I thought how lucky I was to work with Barry. We’d met six months before, when I’d closed my budding therapy practice to become a baker. The decision to switch careers hadn’t been a terribly complicated one: I’d simply realized that someone as screwed up as I was had no business telling other people how to remedy what was wrong with their lives. Barry didn’t expect me to tell him anything; in fact, most mornings we barely spoke. We met at the front door of the bakery at three a.m., nodding our greeting. We understood that at this hour words were beside the point.

I had fallen easily into this routine of silent communication with Barry; it was a language already tightly woven into my subconscious, taught to me long ago by a sister whose profound disabilities had robbed her of words. The thought of Jenny’s angelic, heart-shaped face stopped me in my tracks. Crossing my bare arms over my chest and leaning against the smooth edge of the
counter, I stared blindly at the aged brick wall in front of me, surrendering to the insistent pull of the past.

It had been a decade since I’d seen my sister, since the day I walked out of the Wellman Institute, leaving her in the care of people she did not know, did not love or trust. I considered the ugly mixture of cowardice and passivity that had plagued me for the last ten years, and had kept me wrapped in the safe cocoon of a life I had created in San Francisco. I had no excuses. It was simply too hard. I could not stand the thought of seeing her in that place, soaked in the rancid odor of excrement and neglect.

Nor could I forgive what my father had done to our family by convincing my mother to place Jenny there, a decision that had given me the final push I needed to remove him from my life permanently. The little I knew about my sister’s life I learned secondhand through infrequent calls from my mother. Those conversations were brief and awkward, smoldering with tension. I avoided them at any cost.

The word interrupted my thoughts and bounced through my body like an echo, the sound of Jenny’s voice lingering in my heart like the shiver from a nightmare, the kind of shiver that clings to your skin even though you know whatever is haunting you was only a dream. That was it. I had to know if I was imagining things or if something had actually happened to her. Maybe my mother had called me at home and gotten the machine.

Shane never answered anything but his cell phone. I glanced at my watch and saw that it was just past six o’clock. After a year of living together, I knew he’d be awake, sitting at the small wrought-iron table in our Tuscany-style kitchen, his meticulously pressed navy blue suit setting off his eyes like an alarm. His blond head would be bent over the files of the cases he would prosecute that day, a forgotten cup of black coffee cooling on the counter. I
didn’t know why he bothered brewing anything; he was always too focused on work to remember to drink it.

A call from me would probably only annoy him, so I decided to swallow my apprehension and take the chance my mother would be awake, getting ready for the bank teller’s job she had worked at since my father divorced her eight years ago. I picked up the cordless phone, slowly and deliberately punching in the number to my childhood home. It rang four times before she answered.

“Hello?” she said, the sound of her conjuring up a usually well-repressed pile of feelings into a small storm inside me.

“Nicky,” she said, surprise wrapped around her voice.

I gritted my teeth at the childish shortening of my name. “Nicole,” I corrected her as I glanced at the cloudy illuminated window of the oven to check the level of browning on the muffins. They needed just a minute more.

“Right. I know. I named you.” She paused. “Did somebody at Wellman call you?”

Anticipation sent cold fingers dancing up my spine. “No. Is Jenny all right?” The pounding of Barry’s radio matched the sprinting beat of my heart.

I heard her inhale several times, perhaps trying to keep back tears. It had been so long since I’d been around her, I couldn’t be sure. Tucking the phone between my ear and shoulder, I grabbed the thick silver oven mitts and lifted the pan out of the oven, carrying it over to the cooling rack while I waited for her to respond. “Mom?” I prompted as the toasted butter scent of finished muffins filled the air around me with their sweet perfume.

She cleared her throat. “Sorry. It’s just so strange that you’d call today. I only found out last night.”

“Jesus,” I said, exasperated. I felt like I was trying to coerce
information from a reluctant suspect. I walked back over to my worktable and set my hands flat against its cool metal surface, pressing the phone into my shoulder with the side of my head. “Found out what?”

She paused again, then finally spoke, her voice quiet, barely above a whisper. “Jenny was raped.”

The weight of those three small words traveled through the phone line and landed like a boulder in my belly. “Oh, no,” I breathed. My heart shook in my chest. I had been expecting something, anything: a sickness, an accident, but not
this.
Hot, thick tears flooded my throat, and I swallowed hard to keep my composure.
“By who?”

“A nurse’s aide, they think. They’re pretty sure it was him.” Her voice trembled.

“God
dammit.
” I kicked an enormous bucket full of brown sugar. The lid popped off and jumped to the floor. I kicked it, too.

“God had nothing to do with this.”

I let go of a disgusted sigh. I didn’t give a rat’s ass what she thought about God. I was surprised she still had anything to do with Him.

She digested the bitter silence that followed. “There’s more,” she finally said. “Your sister … ” She trailed off, then quickly began again. “She’s pregnant.”

The storm inside me quickly progressed into a tornado, drowning out my senses. The bakery seemed to disappear; the world around me was suddenly reduced to a two-inch shell of insufficient oxygen. As things slowly began to fade back into focus, I realized my mother was still speaking. “… And so maybe it would be good if you could come. Will you come home, Nicky?”

The first words that came to me spilled from my lips before I could rein them in. “I’ll be there as soon as I can,” I said numbly. I hung up and dropped the phone to the floor, then sank there after
it. I felt detached from my body; the too-short legs and slightly fleshy belly belonged to someone else. Someone who didn’t have a sister who was pregnant by a monster. Someone who didn’t have to face a past she thought she had left behind.

A moment later Barry strode out of the dish room, a stack of yellow dessert plates balanced in each of his wide palms. Seeing my sagging figure on the floor, he rushed to set his load on the counter. When he folded his body down next to me, I gratefully leaned into his strong embrace, my cheek pressed against the xylophone of his rib cage. “What’s wrong, champ?” he whispered against my hair. His T-shirt was damp and smelled of detergent and healthy male sweat. “Muffins giving you a hard time?”

I made a noise that was half sob, half laugh, then whispered into his chest, “My sister’s been raped.” The words felt like a cat’s claws against my skin. Knowing he’d understand my need for silence, I simply closed my eyes and let him hold me. I pressed my hand firmly over my aching heart, hopeful that Jenny might feel my touch and know her sister had heard her call.

I was finally going home.

At first, we had not known anything was wrong with Jenny. She had been such a stunning baby—much prettier than I ever was. When I was three and Jenny was a newborn, my mother took us to a small park in our neighborhood, where I could climb on the jungle gym while she held court and allowed other mothers to croon over her perfect second daughter.

Jenny came out of the womb with dark brown hair and skin creamy as milk splashed with brushstrokes of rosy peach. Her eyes were a deep, viscous indigo, huge and round in her tiny baby head, framed by rows of lashes so lush you longed to touch them to see if they were real. She was the human embodiment of a porcelain doll.