Read The Last Waltz: . . . another pride and prejudice journey of love Online

The Last Waltz: . . . another pride and prejudice journey of love 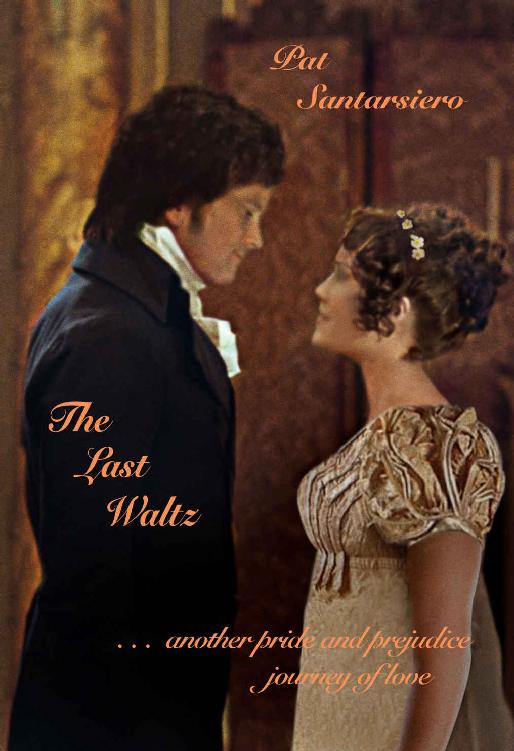 . . another pride and prejudice

The Last Waltz
is a work of fiction. The characters depicted

gave me the inspiration for this book.

I especially would like to thank Gayle Mills, Katie Baxley and Wendi Sotis for providing me with their knowledge and expertise. Just knowing that you are there when I need you is an enormous comfort.

The bells tolled in the churchyard as the impressive group of assembled mourners looked on at the small procession making its way down the aisle. They moved slowly and somberly towards the first few rows of pews that were designated for the immediate family.

Fitzwilliam Darcy led the procession. At two and twenty he was now the new Master of Pemberley—a commission he was certain he was ill-equipped to undertake. The thought of that daunting task before him further burdened his soul. His twelve year old sister, Georgiana, clung to his arm for support. They were followed by his uncle and aunt, Lord and Lady Matlock and their two children: Geoffrey, Viscount of Matlock and heir, and his younger brother, Richard. Following them were his aunt, Lady Catherine de Bourgh and her daughter, Anne.

In the last pew of the prestigious church sat Mrs. Edward Gardiner; her two nieces, Jane and Elizabeth, beside her. The two eldest Bennet daughters had arrived less than a fortnight ago to spend some time in Cheapside visiting with their aunt and uncle, when news spread throughout London of the passing of Mr. George Darcy of Derbyshire.

An official burial service had already been performed at the small chapel at Pemberley, but today a memorial was being held in London, where the Darcys had maintained a townhouse for several generations.

Madeline Gardiner had grown up in Lambton, not five miles from Pemberley, where George Darcy had reigned as its Master. She remembered his generous nature and recalled how he and his wife had been so kind to her parents who owned a small shop in the village. She knew much of the town’s prosperity relied on the Darcys and on Pemberley’s success, since the tenants of that grand estate purchased most of their worldly goods in the small village.

“Where is their mother?” whispered Elizabeth to her aunt.

“She died many years ago, when her daughter was but a small child of five or six.”

Elizabeth could hardly imagine such a thing. Not quite sixteen, she had not yet experienced the heartbreak of losing a parent, the very thought of it bringing tears to her eyes. Her generous heart went out to the young girl who had lost her mother before ever really knowing her and who now grieved for the passing of her father.

As the memorial service progressed, the vicar spoke of George Darcy’s great respect for the land, of his devotion to his late wife, and of the love and pride he had for his children. As these heart-rending words reached the ears of the grieving Georgiana Darcy, the young girl could no longer contain her tears as, despite her best efforts, she sobbed aloud.

Embarrassed by her emotional display, she slipped past her brother and rushed towards the doors, trying to escape the sadness that enveloped her. She reached the end of the aisle, her eyes blurry with tears, and she stumbled. As her body anticipated hitting the unforgiving stone floor, she was miraculously saved as she found herself drawn into the safety and warmth of an embrace.

Georgiana looked up into the consoling eyes of her rescuer and moved in unison with the young woman who led her to the last pew and bade her to sit beside her. The comforting arm that now encircled her helped ease the level of her distress.

Fitzwilliam Darcy stood as his sister darted from the pew. Following her path with his eyes and seeing that her safety had been procured, he regained his seat and nodded to the vicar to proceed.

Across the aisle, Richard Fitzwilliam had immediately startled at the sight of his young cousin’s flight. He breathed a sigh of relief as she now sedately sat beside the kind young woman who had come to her aid.
Flight
, he thought to himself,
could there be a more apt description?
Yes, she was just as fragile as a bird, ready to fly away at the first sign of peril.

When the service had ended, Darcy strode to the final pew to retrieve his sister. He greeted the three women who now accompanied her.

Their eyes briefly met as she spoke, and she felt herself blush.

“Thank you, Miss Bennet, for saving my sister from what would surely have been an injurious fall.” He gathered Georgiana closer into his protective embrace.

“Yes,” said the shy young girl. “You have my sincere gratitude.”

Elizabeth offered her a smile. “I am only glad that you were not hurt. I had been watching you, and when you rushed down the aisle . . . oh,” she said as she inhaled a gasp. “Forgive me, I did not mean to imply that I was staring at you,” she hurriedly tried to explain. “I only meant that I was concerned for you. You . . . you have suffered so much loss.”

The young girl gave Elizabeth a faint smile, the first one she had given anyone in the six days since her father’s death. “Thank you, Miss Bennet, your kindness is appreciated.”

“Elizabeth . . . please, call me Elizabeth,” she said as she touched the young girl’s hand.

“Thank you, Elizabeth. I am Georgiana . . . Georgiana Darcy.”

Sensing the stare of the gentleman’s eyes upon her, Elizabeth looked up at him and held his piercing gaze for what seemed an eternity, but in reality was no more than a moment. She was relieved to see no offense had been taken at her forwardness.

Darcy could not help but stare. At first glance, he had mistakenly thought her brown eyes quite ordinary. But when she turned her full gaze upon him, the vibrant glints of amber that shimmered from within them seemed almost to hypnotize him.

Mrs. Gardiner took the moment of silence that followed to introduce herself and offer her condolences, explaining her acquaintance with their father.

“It was very kind of you to attend the service, Mrs. Gardiner.”

“Not at all, sir. Your father was the best of men and well regarded by all of us who lived in Lambton, as was your mother.”

“Were you acquainted with our mother also?”

“I did happen to meet her on a few occasions when she visited my father’s shop. She was always most kind—such a fine and beautiful lady.” She then turned to Georgiana. “You resemble your mother very much.” Georgiana blushed at the compliment.

“This is Elizabeth’s older sister, Miss Jane Bennet. They are my nieces and are visiting from Hertfordshire.”

Curtsies were exchanged, and Darcy bowed as he was introduced to the beautiful young woman with hair of gold, but then his eyes once again fixed upon the dark-haired girl. She made quite a pretty picture. Her dark eyes were wide and expressive, and her curly chestnut hair was hopelessly escaping both her bonnet and the pins that had been intended to secure it, all of it creating a rather enchanting illusion.

“Do you visit your aunt frequently, Miss Elizabeth?” he asked.

“I’m afraid only once or twice a year. I would gladly visit more often, but my mother relies on my help with our three younger sisters. I have always thought London a most exciting place. There is always so much going on to stimulate one’s mind: the museums, the concerts, the plays. I could not imagine tiring of such a place.”

Despite his grief, he could not help but smile at her youthful enthusiasm.

“Come, Fitzwilliam; the carriage is waiting!”

Darcy turned to see his Aunt Catherine whose look conveyed her disdain at his indulging the three plebian women with conversation. As he looked upon the disapproving expression on her face, he was reminded that from now on his life would no longer be his own. Every word he spoke, every alliance he formed, every decision he made would now be examined and judged by his family and all of society.

His complexion deepened at his aunt’s uncivil address, but he gave her a brief nod of his head, indicating his intention to comply.

“I’m sorry, but we must take our leave, as our family awaits us. Thank you all again for attending and for your assistance, Miss Elizabeth,” he said giving them a final bow.

As Darcy guided Georgiana into their carriage, he looked back towards the church where the three women were now departing.

When he looked upon Elizabeth, he allowed his gaze to linger. And as her eyes finally met his, he felt a moment of regret. With resolve, he forced himself to turn away from her, shaking his head slightly as if admonishing his thoughts, before quickly disappearing inside the carriage.

George Wickham sat back in his chair and downed another glass of whiskey. For the past several days, he had done little but drink, and his mood was foul.

His benefactor was gone, and now he could no longer charm his way into the Darcy household. How could the old man not have left him an inheritance? Had he played his part too well? Obviously he had done such a good job of masquerading his true character that George Darcy actually believed he wished to take his orders and make the church his profession; thus, leaving him only the promise of a family living rather than the funds he craved.

He may have fooled the father, but he knew he had not for a moment fooled the son. Darcy knew all too well his true character. He had witnessed his debauchery at Cambridge and knew he was certainly unfit to represent the moral voice of the pulpit.

He looked out the window of the Lambton pub and saw the wagon that had brought him to town. It was old and dilapidated; the horse that drew it, in much the same state. He had hoped to buy a fine carriage with part of his inheritance, one as fashionable as that in which Darcy travelled.

He had seen two perfectly matched Yorkshire trotters at Tattersall’s the week before that he longed to purchase. And clothes… he had wanted to dress just as fastidiously as the wealthy Fitzwilliam Darcy and drink the same fine brandy and attract the same beautiful women. Of course, all of it was rendered unattainable upon the reading of the will.

Suddenly the idea of travelling to London to confront the man consumed his thoughts. But as he again eyed his inferior transportation through the pub window, he highly doubted its ability to endure such a long and arduous journey.

Maybe he would just buy another bottle of cheap whiskey instead and take it back to the old hunting lodge on Pemberley’s property. He often used the long forgotten cabin as his refuge as it served two useful purposes: a place to sleep off his drunken benders and privacy to entertain the more accommodating women of his acquaintance. He quickly scanned the pub for likely candidates, but unfortunately none were about.

Wickham poured himself another glass of whiskey. He threw his head back and downed it all in one long gulp as he silently cursed the injustice of it all.

The Road to Nevermore by Christopher Lincoln
Legion Of The Damned - 06 - For Those Who Fell by William C. Dietz
Pray for Reign (an Anne Boleyn novel) by Atkinson, Thea
Resurrection: A Zombie Novel by Totten, Michael J.
Beyond Sunrise by Candice Proctor
Warlock's Shadow by Stephen Deas
The Giving Season by Rebecca Brock
Love's Guardian by Ireland, Dawn
Broken (Book 1, The Watcher Chronicles, Paranormal Romance) by West, S.J.
Lessons of the Heart by Jodie Larson
Our partner