Read The Lost World of Adam and Eve Online

The Lost World of Adam and Eve 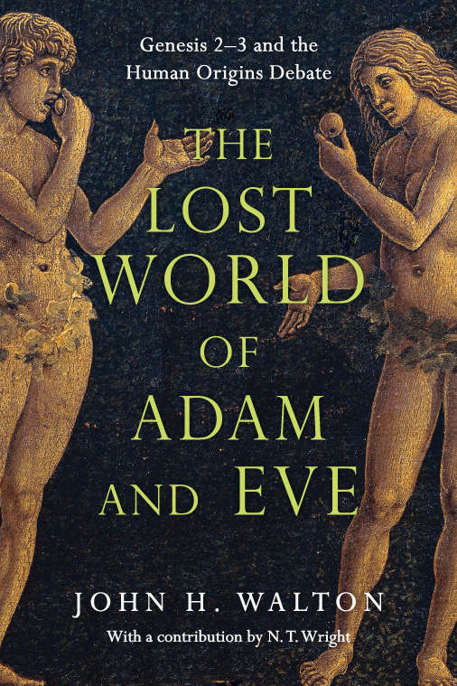 Genesis 2–3 and the Human Origins Debate

With a contribution by N. T. Wright

All rights reserved. No part of this book may be reproduced in any form without written permission from InterVarsity Press.

InterVarsity Press
®
is the book-publishing division of InterVarsity Christian Fellowship/USA
®
, a movement of students and faculty active on campus at hundreds of universities, colleges and schools of nursing in the United States of America, and a member movement of the International Fellowship of Evangelical Students. For information about local and regional activities, visit
intervarsity.org
.

To my student research assistants over the years who have helped me become a better writer.

I am grateful for the careful reading and helpful suggestions provided by Jonathan Walton, Aubrey Buster and Kim Carlton.

Proposition 1
:
Genesis Is an Ancient Document

Proposition 2
:
In the Ancient World and the Old Testament, Creating Focuses on Establishing Order by Assigning Roles and Functions

Proposition 3
:
Genesis 1 Is an Account of Functional Origins, Not Material Origins

Proposition 4
:
In Genesis 1, God Orders the Cosmos as Sacred Space

Proposition 5
:
When God Establishes Functional Order, It Is “Good”

Proposition 6
:
ʾ
ādām Is Used in Genesis 1–5 in a Variety of Ways

Proposition 7
:
The Second Creation Account (Gen 2:4-24) Can Be Viewed as a Sequel Rather Than as a Recapitulation of Day Six in the First Account (Gen 1:1–2:3)

Proposition 8
:
“Forming from Dust” and “Building from Rib” Are Archetypal Claims and Not Claims of Material Origins

Proposition 9
:
Forming of Humans in Ancient Near Eastern Accounts Is Archetypal, So It Would Not Be Unusual for Israelites to Think in Those Terms

Proposition 10
:
The New Testament Is More Interested in Adam and Eve as Archetypes Than as Biological Progenitors

Proposition 11
:
Though Some of the Biblical Interest in Adam and Eve Is Archetypal, They Are Real People Who Existed in a Real Past

Proposition 12
:
Adam Is Assigned as Priest in Sacred Space, with Eve to Help

Proposition 13
:
The Garden Is an Ancient Near Eastern Motif for Sacred Space, and the Trees Are Related to God as the Source of Life and Wisdom

Proposition 14
:
The Serpent Would Have Been Viewed as a Chaos Creature from the Non-ordered Realm, Promoting Disorder

Proposition 15
:
Adam and Eve Chose to Make Themselves the Center of Order and Source of Wisdom, Thereby Admitting Disorder into the Cosmos

Proposition 16
:
We Currently Live in a World with Non-order, Order and Disorder

Proposition 17
:
All People Are Subject to Sin and Death Because of the Disorder in the World, Not Because of Genetics

Proposition 18
:
Jesus Is the Keystone of God’s Plan to Resolve Disorder and Perfect Order

Proposition 20
:
It Is Not Essential That All People Descended from Adam and Eve

Proposition 21
:
Humans Could Be Viewed as Distinct Creatures and a Special Creation of God Even If There Was Material Continuity

Praise for
The Lost World of Adam & Eve

Of the modern controversies currently facing the church, one of the most heated and most prominent concerns the relationship of the Bible to science in general and human origins in particular. Is there an essential, inherent conflict between the claims of the Bible and the current scientific consensus about human origins (a consensus involving biological evolution, common ancestry, comparative genomics, the fossil record and anthropology, just to name a few of the major contributors)?

It is true that science is changing at least in little ways all the time, and, in contrast, it is easy to think of the Bible as static and unchanging. Though the Bible itself does not change, we realize that our interpretation of Scripture is much more dynamic, and the resulting shape of theology consequently subject to constant reassessment (more on the perimeter than in the core). Two millennia of church history have witnessed some dramatic differences in hermeneutics, some deeply ingrained theological controversies (some options cast off as heretical, some bringing major splits and some being retained side by side) and some substantial disagreements about the interpretation of particular passages. The history of interpretation of Genesis 1–3 in particular is anything but monolithic, and neither doctrine nor exegesis is characterized by complete homogeneity. This fact can be observed even in the earliest periods.

One feature becomes clear from even a cursory study of this period [the first couple of centuries after Christ]: we do not find a univocal reading or a single method. . . . We do, however, find a consistent and coherent pattern of reading, whose theological character is considerably different from the modern mainstream.
1

This means that Christianity has been forced to be content with a number of alternatives on the table for interpreting the early chapters of Genesis. It is sadly true that some have adopted a view that only their particular parochial reading is legitimate for a “real” Christian. We must confess to our corporate shame that blood has even been shed.

As interpreters of Scripture and as theologians, we are accountable to the biblical text. As important as our theological traditions are, since interpretations and even the hermeneutics by which we interpret have changed over the centuries, we cannot be unflinchingly accountable to tradition at every level. New insights and new information can emerge at any time. Several hundred years ago, renewed access to the original languages had significant impact on biblical interpretation. In recent decades, the availability of documents from the ancient world has provided a remarkable resource for our reading of the biblical text. We dare not neglect these tools when they can contribute so significantly to our interpretation.

On the science side of the equation, the last 150 years have likewise been revolutionary. The development of evolutionary theory was only the beginning, and the exciting information available from the mapping of the human genome is perhaps the most recent advance, but certainly not the last, that provides a basis for investigating what we can learn about human origins. To the dismay of those who take the Bible seriously, the various fields of science are often used to mount attacks against the Bible and against faith. Unfortunately, that has caused some to become dismissive or antagonistic toward science. This should not be the case for Christians since we affirm the importance of both special revelation (in the Bible and in Jesus) and general revelation (in the world that God has created and that science helps us understand). The fact that some wield science as a weapon against faith is no reason to think that science or scientists are the problem. The philosophy of naturalism is the problem. After all, the same people who use science as a weapon would be just as inclined to use the Bible as a weapon against those who take it as the Word of God. Our response should be simply to try to explain the Bible better and to make it clear to the abusers how they are viewing it wrongly. We can do the same with science.

In this book, I will contend that the perceived threat posed by the current consensus about human origins is overblown. That consensus accepts the principles of common ancestry and evolutionary theory as the explanation for the existence of all life. Though we should not blindly accept the scientific consensus if its results are questionable on scientific principles, we can reach an understanding that regardless of whether the scientific conclusions stand the test of time or not, they pose no threat to biblical belief. Admittedly, however, a perception of conflict is not uncommon.

With that in mind, I will not give very much attention to the question of the legitimacy of the scientific claims. Instead I will be conducting a close reading of the Bible as an ancient document
and
as Scripture to explore the claims that it makes. The focus will be Genesis, but I will bring the full canon under consideration. I will not be trying to isolate
the
right answer or interpretation but will attempt to show that there are faithful readings of Scripture that, while they may differ somewhat from some traditional readings of the past, find support in the text and are compatible with what we find in the context of the ancient Near East as well as with some of the more recent scientific discoveries. At the same time, the broad spectrum of core theology is retained: the authority of Scripture,
2
God’s intimate and active role as Creator regardless of the mechanisms he used or the time he took, that material creation was ex nihilo, that we have all been created by God, and that there was a point in time when sin entered the world, therefore necessitating salvation.

We are not compelled to bring the Bible into conformity either with its cultural context or with modern science, but if an interpretation of Genesis, for example, coincides with what we find as characteristic of the ancient world or with what seem to be sound scientific conclusions, all the better. Even in a Bible-first approach (in contrast to a science-first or even extrabiblical-first approach), we can be attentive to the ancient world or to modern science without compromising our convictions about the Bible. Either information from the literature of the ancient world or new insights from scientific investigation may appropriately prompt us to go back to the Bible to reconsider our interpretations. This does not mean that we blindly force the text to conform to demand from other fields. The Bible must retain its autonomy and speak for itself. But that is also true when we hold traditional interpretations up to the Bible. The biblical text must retain its autonomy from tradition. We must always be willing to return to the text and consider it with fresh eyes. That is the goal of this book. I certainly do not have all the answers, but prompted by new information from the ancient world and new insights by modern science, I return to the biblical text to see whether there are options that have been missed or truths that have become submerged under the frozen surface of traditional readings. I have no intention of undermining traditional theology—I work from a firm conviction about the authority of Scripture and those traditions that have been built on interpretation of Scripture. But within our theological framework, there is plenty of room to read the text anew and perhaps even to be surprised by it.