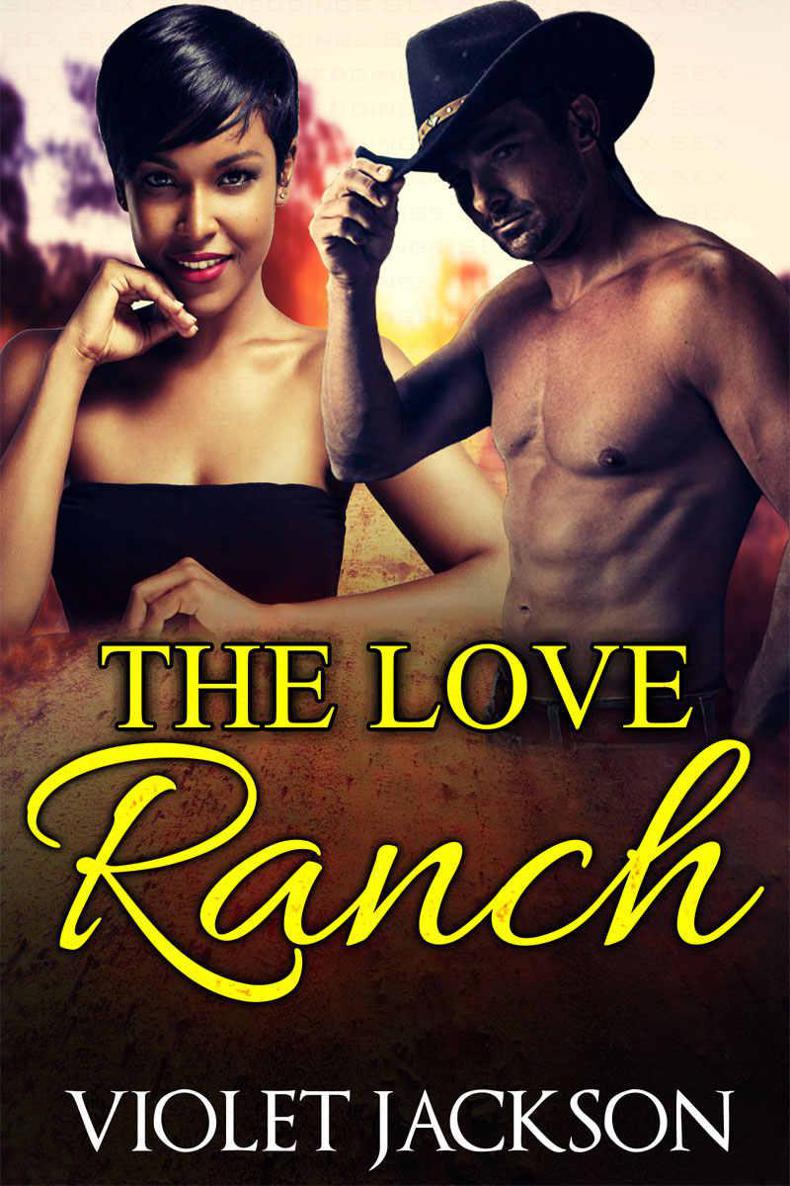 To All The Readers Who Are Making My Dream Possible

This book is a work of fiction. Names, characters, places and incidents are either the product of the author's imagination or are used fictionally. Any resemblance to actual persons, living or dead, or to actual events or locales is entirely coincidental.

Copyright © 2015 Violet Jackson
. All rights reserved. Including the right to reproduce this book or portions thereof, in any form. No part of this text may be reproduced in any form without the express written permission of the author.

WARNING: This book contains sexually explicit scenes and adult language. It may be considered offensive to some readers. This book is for sale to adults ONLY.

Please ensure this book is stored somewhere that cannot be accessed by underage readers.

Other Titles By Violet (Free on Kindle Unlimited)

Falling For The Doctor

Jamaica, I Love You

For The Love Of The Doctor

Doctor Of  My Dreams

Meet Me In Alaska

I'm Violet and thanks so much for taking the time to read my book! I've always been a strong curvy African American woman who isn't afraid to go against societies social expectations of us. I hope through my writing you can trying to break out of these expectations as well, and truly be who you want to be. When I'm not writing I'm a regular 30 something gal who loves reading about strong males who appreciate women in all their beautiful forms. I also have a loving husband, and two beautiful children that I am grateful for every day.

Really hope you enjoy the book!

Tiana Walker was a woman on the run. After dealing with an abusive husband for years, she decided that enough was enough when her husband struck their child.

After calling the police on her husband and having him taken away to jail, she picked up everything and moved from New York City to a small town in Texas.  To say the transition was tough would be an understatement, but the safety of her child meant everything to her.

In Texas she got a job as a waitress at the local saloon, where she would meet one of the most dashing local cowboys in town, Christian Langfield. But things started out on the wrong foot for them, as Chrisitan would constantly tease her, and Tiana couldn't put her finger on it but her interactions with him were always bittersweet.

When she saw an ad for the position of a cook at a local ranch, Tiana jumped at the opportunity as cooking was always a passion of hers. But once at the ranch she was surprised to find out how easy it was for her to get the job, and even more surprised to find out Christian was also a ranch had there. Little did she know that he was much more than that.

Find out if Tiana and Christian get together in this touching romance by bestselling author Violet Jackson.

This steamy BWWM romance is for adult audiences 18+ only

“Welcome once more to Paradise, Ms. Walker. I hope you enjoy our little town,” the buxom, red-haired realtor yelled cheerfully as she started her Chevy and pulled away from the curb, flipping a careless wave over her shoulder.

Tiana Walker looked around, her brown eyes noting the simple charm of her new home as she tried to look optimistic for Jamal, her four-year-old son. Jamal was understandably upset because he had had to say goodbye to all his friends and then suffered the added indignity of being taken all the way out of New York straight to some backwater little town in Texas. He was too young to understand why they had to move, so naturally he resented it.

The town was called Paradise, true, but that was not necessarily the charm for Tiana. For her, the beauty was in the fact that the town was so little it was barely on the map; less chances of him finding them here. Why, there couldn’t be more than three hundred people in the entire town, which, to someone from New York, was like a drop of water in an ocean.

Besides, she mused, the house was so beautiful and yet, amazingly enough, so affordable that she had managed to pay two months' rent in one shot, which for her was saying a lot. In New York, she had barely been able to scrape by for one week's rent even though she had been working three jobs! Plus, she had always had to keep looking over her shoulder, which was something less likely to happen here.

“Come on, Jamal, this is our new home,” she said now, ruffling her son’s curly black hair even as her brown eyes anxiously scanned his face.

“I don’t want to stay here,” Jamal told her, his lower lip trembling with the effort it took him to control his tears. He was a cute little boy with riotously curly hair, beautiful olive skin, even white teeth, and a jaw that tended to jut out stubbornly whenever he was going to be difficult. The little jaw was jutting out now.

Tiana’s heart splintered in her chest as she gazed down into his unhappy little face. Her baby was deeply unhappy, she recognized, but there wasn’t much she could do about it.

“Jamal, honey,” she sighed, dropping to her haunches in front of him, “I know you’re going to miss your friends back home but we have to make do, okay? We can’t afford New York anymore,” she said, her eyes staring into his, which were the exact same hot-chocolate shade as hers. “It’s too expensive. If we stayed, we’d be flat broke in a week without two pennies to rub together and then we wouldn’t have any more money to buy food.”

Tiana bit her lip as she considered the unyielding militant expression on Jamal’s face. She could never tell him that the real reason they had moved was because she was scared out of her mind for both their lives. He would never understand; he was way too young.

As she rose to her feet and started towards the door of their new home, pulling Jamal along, catastrophe struck. Jamal let out a yelp of protest, dug in his heels and started struggling against her hold, yanking furiously to free his arm. His little body filled with angry energy as he hit out against her, his arms and legs flailing as he screamed loud enough to raise the dead. It was a classic Jamal-tantrum but she had been hoping she would at least have the luxury of stepping over the threshold and into their new home before he would explode. Heck, their baggage was still strewn about on the sidewalk.

“Jamal!” Tiana cried as she tried desperately to stay out of the way of his flailing limbs whilst maintaining a firm grip on his arms.

“Hey, hey,” someone shouted, running up to them.

Tiana barely registered that the newcomer was a tall, dark-haired man wearing an old t-shirt and a pair of well-worn jeans that outlined the powerful muscles in his thighs and rode low on a washboard flat belly.

“Problems?” he asked now, turning the full force of his pale gray eyes on her.

Tiana took a hasty step back, unconsciously loosening her grip on her son some more as her eyes clashed with the stranger’s. He had kind eyes with laugh lines at the corners, she noted automatically even as her mouth went dry. He stood tall, six-foot-three inches of solid, hard male with silver-gray eyes that made her want to stare long and hard into them. His smile reached his eyes, crinkling the corners in a sweet smile that emphasized his dimples, and softened his hard features. He had a long aquiline nose, with even white teeth, shoulders the size of Texas and scuffed brown boots that made him look tough and intensely masculine. A cowboy hat sat carelessly atop his dark head of hair, completing the ensemble and making her swallow as she acknowledged that this had to be the sexiest man she had ever clapped eyes on.

“Uh, nothing we can’t handle thanks.”

He exuded a sort of silent sex appeal that reminded her of the strong silent types her favorite romance authors loved to write about.

“Honey, nothin’ wrong in askin’ for a lil’ help,” he said in an unmistakable Texas twang, and Tiana rolled her eyes inwardly. Of course it figured that the first person she would run into, besides her realtor, would be a cowboy complete with a Texas drawl.

His gaze flicked over her short, dark head of hair; trailed down her slim, long neck and swept down the rest of her so fast, his surveillance barely registered. She was lovely, he decided; heck she was a knockout with a body straight out of a man’s most private fantasies. She had full sensuous, dewy lips; dimples in both cheeks; short brown hair that barely scraped her shoulders, a killer body with a perfect hourglass figure and olive skin, shapely legs so long they made his mouth go dry just imagining them raised in interesting positions. Her brown eyes were like banks of liquid fire flowing with hot chocolate as she looked up at him and he had to make a concerted effort to keep his mouth shut. It just wouldn't do to start drooling, literally, over the new person in town.

Ravaged By The Pack (The Alpha's Mate) by Waite, Ellen
It Ain't Over by Marlo Thomas
Grim Tales by Norman Lock
Guardians of the Lost by Margaret Weis
Reign of Shadows by Wright, Melissa
The Stair Of Time (Book 2) by William Woodward
The Red Carpet by Lavanya Sankaran
The Higgs Boson: Searching for the God Particle by Scientific American Editors
Invasion from Uranus by Nick Pollotta
A Governess for the faithless Duke (Regency Romance) (Regency Tales Book 3) by Regina Darcy
Our partner