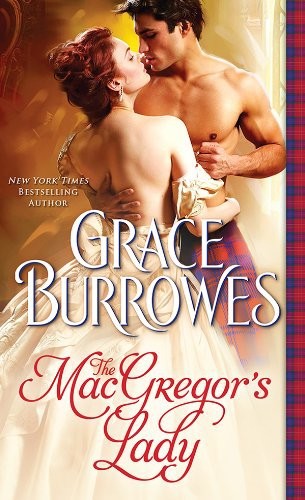 What if the steps they take to avoid marriage...

The last thing Asher MacGregor, newly titled Earl of Balfour, wants is a society wife, though he has agreed to squire Boston heiress Hannah Cooper about the London ballrooms. When he's met that obligation, he'll return to the Highlands, and resume the myriad responsibilities awaiting him there.

...Lead instead to impossible love?

At her step-father's insistence, Hannah Cooper must endure a London season, though she has no intention of surrendering her inheritance to a fortune hunter. When she's done her duty, she'll return to Boston and the siblings who depend upon her for their safety... or will she? The taciturn Scottish earl suits her purposes admirably - until genuine liking and unexpected passion bring Asher and Hannah close.
For if the Scottish earl and the American heiress fall in love, an ocean of differences threatens to keep them apart.

Excerpt from
The Bridegroom Wore Plaid

Excerpt from
Once Upon a Tartan

Excerpt from
Mary Fran and Matthew

To those who venture far from home

Asher MacGregor, ninth Earl of Balfour, had crossed the Atlantic five times in his thirty-some years on earth, each passage worse than the last, each leaving him a little more symbolically at sea.

And yet, he’d learned a few things in his wanderings. Though the
Harrow
had made port yesterday afternoon, her captain would wait until morning to come into Edinburgh’s harbor, so he might get a day’s work from his crew before they went ashore to drink and whore away their pay.

Giving Asher one more night to avoid his fate.

Asher also knew that after a winter Atlantic crossing, Miss Hannah Cooper and her aunt, Miss Enid Cooper, would be weary travelers. They had no notion the aging Baron Fenimore was using them to punish his nephew for being… what?

Asher climbed from the traveling coach at the docks, the heavy vehicle being the only one in his Edinburgh mews suited to dealing with muddy, slushy streets and heavy loads of baggage.

“Stay with the horses,” Asher admonished the coachy and both footmen. The docks were safe enough by daylight—for docks, and particularly for a man with some height, muscle, and frontier fighting skills. Asher knew which quay would be unloading the
Harrow
’s cargoes and debarking its passengers, but the whole situation brought back memories.

Memories of being eleven years old, on just such a cold, blustery morning, on just these docks, and only servants to fetch him to the family he’d never met.

Memories of landing back on Canadian shores as a twenty-year-old, hoping for some sense of homecoming, of welcome, only to realize he wouldn’t
even
be met by servants.

And two more returns to Scotland, both solitary, one at age twenty-two, and the most recent—the hardest one—less than six months past, both with a disappointing sense of bowing to an empty fate.

Dockside, a tender shipped oars and lowered a gangplank as the passengers and a small crowd on the wharf cheered. Families were reunited, travelers tried to adjust to walking on land, and one old gent creaked to his knees and kissed terra firma on the weathered and chilly wooden cheek of the wharf.

A total of six women debarked. Two were clearly of the lower orders, the younger showing sufficient symptoms of scoliosis to ensure a crabbed old age. They bustled away in the direction of a waiting mule cart, a sturdy yeoman at the reins.

Two were just as clearly wellborn, or at least well off, though the younger of this pair suffered acute strabismus. They climbed into a black-lacquered coach-and-four, two liveried footmen behind.

His guests. Plain but not too plain in their attire, the older one taking a bench while the younger one stood by like a protective hound, scanning the wharf for either danger or welcome. The young lady suffered neither a hunched back nor a squint, though she was afflicted with red hair.

The older woman patted the bench; the younger shook her head. Her bonnet ribbons weren’t tied in a fetching, off-center bow, a sign she either wasn’t seeking the approval of fashionable Society or wasn’t native to Great Britain.

The younger Miss Cooper looked chilly, wary, and alone, and though she was a burden Asher had done nothing to merit, neither did she deserve to stand watch in the bitter shore breeze, courting an inflammation of the lungs.

“Ladies, I hesitate to be so bold, but if you’re Miss Hannah Cooper and Miss Enid Cooper, I’m Balfour, your escort.”

“Mr. Balfour.” Miss Hannah bobbed a stiff curtsy, one hand braced on the back of the bench. “Pleased to make your acquaintance.”

“Lord Balfour.” Miss Cooper held out a hand. “Forgive my niece her form of address. We discussed it endlessly on the crossing, but we are weary and forgetful.”

“And likely chilled,” Asher said, bowing over the older woman’s gloved fingers. “The rest of your bags will be sent on to the town house. If I might take you to the coach?”

The aunt kept her hand in his and rose with his assistance. The young lady merely watched while Asher tucked the aunt’s hand over his arm and gave a few instructions to the stevedores. He did not linger over civilities, knowing Miss Hannah’s impassivity could mask fatigue, bewilderment, homesickness, and other emotions common to the weary traveler in a strange land.

At first he thought Miss Hannah was having difficulty walking on land. After days at sea, it could be like that. The ceaseless, nauseating movement became normal, and then concentration was needed to adjust to stillness.

“How was your crossing?”

“Truly, truly unpleasant, my lord,” the elder Miss Cooper said. “I dread the return trip already.” She chattered on about the food, the crowding, the rough crew, the cold, the endless stench of the sea, and all manner of discomfort, and occasionally, she’d stumble a little, lean on Asher for a moment, then resume both her walking and her complaining.

When she at one point turned her face up to his with the apparent intent of batting her eyes—Uncle Fenimore must truly have taken Asher into dislike—Asher noted that the aunt’s pupils were a trifle enlarged.

“Though I must say”—she paused for breath as they neared the coach—“it is exceedingly good to hear the Queen’s English spoken with the Queen’s accent and intonation. It has been twenty years, you know, since such a sound graced my ears. Twenty years.”

Of course he did not know, nor did he care. Miss Cooper shook her head at the sorrow of it all, and Asher glanced over his shoulder to see how this dirge was striking the niece. The poor girl had doubtless endured an ocean of such woes, for a woman dependent upon the poppy was usually a self-absorbed creature indeed.

Miss Hannah’s expression was unreadable, and her remarkably ugly brown bonnet had remained on her head, despite the limp ribbons and a brisk breeze. She trundled along unevenly behind them like a servant, but her head was up and her gaze was darting all over the passing scene, like a small child on her first trip to the trading post. A coil of russet hair tried to escape the bonnet’s confines near her left ear.

“This is the Balfour coach,” Asher said. He handed in the older woman, then extended a hand to the niece. She glanced around one more time as if reluctant to part with the scenery—Edinburgh was a lively and beautiful city, after all—then darted into the coach after barely touching her fingers to his.

He climbed in, predictably tipping the coach with his considerable weight. When the thing righted itself—an earl’s coach must be well appointed and well sprung, regardless of the expense—Asher thumped the roof with a gloved fist.

Miss Enid pulled the shade closed on her coach window, no doubt because her eyes were offended by the Scottish winter sunshine.

“Tell me, my lord, will we pass an apothecary on the way to our accommodations?”

“We shall. Edinburgh has shops aplenty, including apothecaries, though the town house is quite commodious. If you need a common medicinal, we likely have it on hand.”

“I’ve the very worst head. Didn’t I tell you, Hannah, my head would plague me terribly? A touch of the poppy might provide a little ease.”

“I’m sure we can accommodate you.” As much as old Fenimore grumbled about aches and pains, there was bound to be an entire pantry of nostrums and patent remedies somewhere in the house Fenimore had used as freely as if he owned it. “What about you, Miss Hannah? Has your health suffered as a result of a winter crossing?”

She was peering out the window and trying not to get caught at it. Asher didn’t smile, but something of his amusement must have shown in his eyes, because she shifted her gaze to meet his, like a cannon swiveling to sight on an approaching target.

The tones were clipped, the vowels flattened, and the sound was music to Asher’s cold ears. Her accent might strike some as uneducated, but it would never sound slow-witted. That accent connoted a wily mental agility, and he hadn’t heard it in too long.

“Boston, if I do not mistake your accent?”

The aunt waved a hand. “Oh, the accent! There’s nothing to be done, I’m afraid. She’s had the best tutors, the best dancing masters, the best instructors of deportment and elocution, but none of them made any headway against that accent.”

This use of the third person on a fellow occupant of the same coach, even a large coach, had the effect of compressing Miss Hannah’s lips and turning her gun sights back to the streets. When she shifted her gaze, the fugitive coil of hair escaped the bonnet altogether to lie in coppery glory against her neck.

Edinburgh was a bustling place year-round. Its better neighborhoods—some of them less than fifty years old—did not empty out in summer, nor did the city limit its social activities to a mere three months in spring. Asher had enjoyed his visits here, as much as he enjoyed any city, and he rather liked Miss Hannah’s curiosity about it. As the horses trotted off in the direction of the New Town, he recounted various anecdotes about the place, suspecting his guests were too tired to manage much conversation.

And all the while he talked, he watched Miss Hannah Lynn Cooper as surreptitiously as close quarters would allow.

She was a disaster of the first water in terms of fashion—something he also had to like about her. The bonnet, with its wrinkled ribbons, peculiar brown flowers, and slightly bent brim was only the beginning. Her index finger poked out of her glove. The seam wasn’t frayed, the end of the finger hadn’t been obviously darned, the glove was simply shot, and stained across the knuckles to boot.