Read The Man who Missed the War Online

The Man who Missed the War 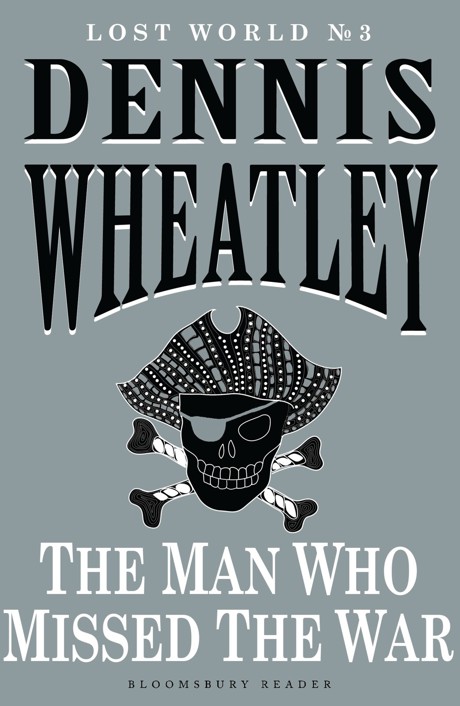 THE MAN WHO MISSED THE WAR
Dennis Wheatley

who was my invaluable secretary through the dark days of 1941–42, and who has now most generously given up her rest days from her war job to deciphering my hand-written manuscript, in order that a fair typed copy of this present book should reach my publishers and readers with a minimum of delay.

4 Eavesdroppers Never Hear Good of Themselves

10 The Horror that Lurked on the Foreshore

15 The Coming of the Dog

17 The Temple of the False Sun

18 The Secret of the Mountain

19 Among Those Old in Sin

Dennis Wheatley was my grandfather. He only had one child, my father Anthony, from his first marriage to Nancy Robinson. Nancy was the youngest in a large family of ten Robinson children and she had a wonderful zest for life and a gaiety about her that I much admired as a boy brought up in the dull Seventies. Thinking about it now, I suspect that I was drawn to a young Ginny Hewett, a similarly bubbly character, and now my wife of 27 years, because she resembled Nancy in many ways.

As grandparents, Dennis and Nancy were very different. Nancy’s visits would fill the house with laughter and mischievous gossip, while Dennis and his second wife Joan would descend like minor royalty, all children expected to behave. Each held court in their own way but Dennis was the famous one with the famous friends and the famous stories.

There is something of the fantasist in every storyteller, and most novelists writing thrillers see themselves in their heroes. However, only a handful can claim to have been involved in actual daring-do. Dennis saw action both at the Front, in the First World War, and behind a desk in the Second. His involvement informed his writing and his stories, even those based on historical events, held a notable veracity that only the life experienced novelist can obtain. I think it was this element that added the important plausibility to his writing. This appealed to his legions of readers who were in that middle ground of fiction, not looking for pure fantasy nor dry fact, but something exciting, extraordinary, possible and even probable.

There were three key characters that Dennis created over the years: The Duc de Richleau, Gregory Sallust and Roger Brook. The first de Richleau stories were set in the years between the wars, when Dennis had started writing. Many of the Sallust stories were written in the early days of the Second World War, shortly before Dennis joined the Joint Planning Staff in Whitehall, and Brook was cast in the time ofthe French Revolution, a period that particularly fascinated him.

He is probably always going to be associated with Black Magic first and foremost, and it’s true that he plugged it hard because sales were always good for those books. However, it’s important to remember that he only wrote eleven Black Magic novels out of more than sixty bestsellers, and readers were just as keen on his other stories. In fact, invariably when I meet people who ask if there is any connection, they tell me that they read ‘all his books’.

Dennis had a full and eventful life, even by the standards of the era he grew up in. He was expelled from Dulwich College and sent to a floating navel run school, HMS Worcester. The conditions on this extraordinary ship were Dickensian. He survived it, and briefly enjoyed London at the pinnacle of the Empire before war wasdeclared and the fun ended. That sort of fun would never be seen again.

He went into business after the First World War, succeeded and failed, and stumbled into writing. It proved to be his calling. Immediate success opened up the opportunity to read and travel, fueling yet more stories and thrilling his growing band of followers.

He had an extraordinary World War II, being one of the first people to be recruited into the select team which dreamed up the deception plans to cover some of the major events of the war such as Operation Torch, Operation Mincemeat and the D-Day landings. Here he became familiar with not only the people at the very top of the war effort, but also a young Commander Ian Fleming, who was later to write the James Bond novels. There are indeed those who have suggested that Gregory Sallust was one of James Bond’s precursors.

The aftermath of the war saw Dennis grow in stature and fame. He settled in his beautiful Georgian house in Lymington surrounded by beautiful things. He knew how to live well, perhaps without regard for his health. He hated exercise, smoked, drank and wrote. Today he would have been bullied by wife and children and friends into giving up these habits and changing his lifestyle, but I’m not sure he would have given in. Maybe like me, he would simply find a quiet place.

If admiral jolly had not been nominated to attend the Naval Conference on Victualling and Supply that autumn; if the conference had been convened at any place other than Portsmouth; if Philip Vaudell’s father, Engineer Captain Vaudell, R.N., had not, many years earlier, come to the rescue of the gallant Admiral in a house of dubious reputation not far removed from the waterfront at Wang-hi-way—then Philip’s life might have run its normal course.

But the Fates had decreed otherwise. An ugly fracas in a Chinese tea-house, where, on a sultry night long ago, two young British Naval officers had fought back to back against curved knives wielded by an angry crowd, was to have repercussions on the son, as yet unborn, of one of them. By the same spinning of the Three Weird Sisters: a girl-child from an American city was to found a new dynasty in a distant land; a Russian prince was to lose the strangest kingdom ever ruled by mortal man; and Hitler was to be struck a mortal blow at the most critical phase of Germany’s second bid to conquer the world.

The day was September the 10th, the year 1937, the scene a medium-sized house set in its own trim gardens, looking out across parched grassland to the greeny-blue sea of Alverstoke Bay, near Portsmouth.

Its owner, Engineer Captain Ralph Vaudell, was a careful man; not so much from inclination as from the habit of years, as he
had never been blessed with a private income, and his wife had died years before, leaving him to bring up their two children. In consequence, he did not often entertain, but tonight he was giving a small dinner-party, and his womenfolk were in an unaccustomed flutter.

Ellen his daughter, whose birth seventeen years earlier had resulted in her mother’s death, was for the twentieth time giving a last touch to the flowers in the drawing-room, in between self-conscious preenings before the overmantel mirror to reassure herself that her newly acquired make-up could not be improved upon.

Mrs. Marlow, fat, homely, boundlessly goodnatured, the Captain’s governess when a boy and the only mother Ellen had ever known, wheezed and tustled a little as, displaying unwonted activity, she propelled her bulky form in a shuttle service between the kitchen and the drawing-room.

‘There!’ she exclaimed, coming to rest at last in her favourite arm-chair. ‘Cook says dinner will be done to a turn by eight, so I only hope they’re punctual.’

‘Don’t fuss, Pin!’ replied Ellen with assured calm. ‘Of course they’ll be punctual. When the Canon was preparing me for confirmation he used to talk about lots of things that had nothing to do with religion, and I remember him saying once, “Punctuality is the politeness of princes!” ’

‘Did he indeed?’ Pin Marlow chuckled. ‘Let’s hope he thinks of himself as one then, though a funnier prince than that fat little ball of a man it would be difficult to imagine. Considering how rarely we see him, it’s a puzzle to me what led your father to ask him tonight.’

Ellen shrugged her slim shoulders: ‘I think it was just that Father wanted someone outside the Services to meet the Admiral; and the Beal-Brookmans are distant relations of ours, aren’t they?’

‘Yes, my lamb. The Canon’s wife was your dear mother’s cousin, though it was only after Mrs. Beal-Brookman’s death that he came to live at Gosport three—no, four—winters ago.’

At that moment Captain Vaudell came hurrying in. He was tallish, lean, grizzled, in his late forties, and the kindness of his
eyes belied the hardness of his mouth. After a swift glance round, he moved over to a small table on which drinks were set, to see that everything on it was in order.

‘Where’s Philip?’ he suddenly demanded of Pin. ‘Woolgathering as usual, I suppose. Probably forgotten that we have guests tonight.’