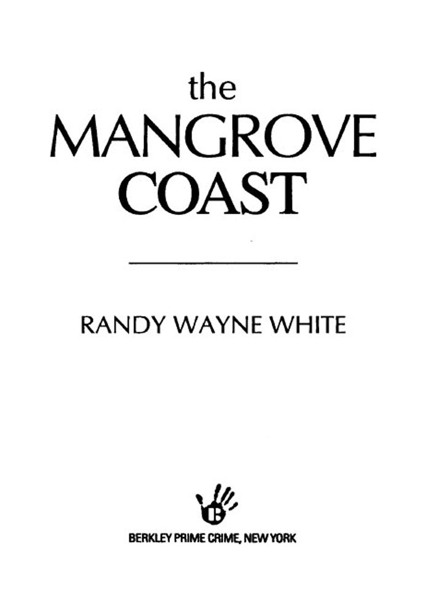 “A Doc Ford novel has more slick moves than a snake in the mangroves.”

“
Captiva
is … packed with finely drawn characters, relevant social issues, superb plotting and an effortless writing style. We’ll drop anything we’re doing to read a new Randy Wayne White book and be glad we did.”

“One of the more dramatic finales in mystery fiction. White tells one whale of a story.”

“Edginess is what sets White’s work apart from the rest of the pack … a prickly, enigmatic hero … ambience, compelling characters and straightforward suspense.”

“An inventive story … White knows how to build a plot … with touches John D. MacDonald would have appreciated.”

“This is a top-shelf thriller written with poetic style and vision. Don’t miss it.”

Praise for
the novels of
RANDY WAYNE WHITE

“Randy Wayne White and his Doc Ford join my list of must-reads. It is no small matter when I assert that White is getting pretty darn close to joining Carl Hiaasen and John D. MacDonald as writers synonymous with serious Florida issues and engaging characters.”

“Enough twists to satisfy any hard-boiled but intelligent detective fan.”

“One of the hottest new writers on the scene.”

“Great action scenes, terrific atmosphere, and a full-bodied hero add up to a pleasure.”

“White is the rightful heir to joining John D. MacDonald, Carl Hiaasen, James Hall, Geoffrey Norman … His precise prose is as fresh and pungent as a salty breeze.”

If you purchased this book without a cover, you should be aware that this book is stolen property. It was reported as “unsold and destroyed” to the publisher and neither the author nor the publisher has received any payment for this “stripped book.”

This novel is a work of fiction. Names, characters, places, and incidents
are either the product of the author’s imagination or are used fictitiously,
and any resemblance to actual persons, living or dead, business
establishments, events, or locales is entirely coincidental.

All rights reserved.
Copyright © 1998 by Randy Wayne White.
This book, or parts thereof, may not be reproduced
in any form without permission.
For information address: G. P. Putnam’s Sons,
a division of Penguin Putnam Inc.,
375 Hudson Street, New York, New York 10014.

T
he portions of this novel set in Panama and the former Panama Canal Zone could not have been written without the advice and patient guidance of men and women who know the area far better than I. For this I thank: T-Bird Tom Pattison, Captain Bob Dollar and Mindy, Queen of the Chilibre Hill Gang; Taj Mahal advocate Jay Sieleman,
la chinita linda
Priscilla Hernandez, Legendary Vernon Scholey, Renate Jope, Mimi and Lucho Azcarraga, and my friend Teresa Martinez. Not only did these kind people introduce me to sunsets at Panama’s Balboa Yacht Club; they also added much in terms of detail and texture about life in the former Canal Zone. However, the portrayal of what is now happening in Panama, while factually accurate, has been filtered through my eyes and my eyes only. Any errors or misrepresentations of fact in this novel are entirely my fault, or of my own creation, as are all claims, insights or opinions implicit or otherwise that might be considered political or controversial.

I would also like to remind readers of the many thousands of Americans past and present who were proudly and justly called Zonians. Without complaint or
excuse, these extraordinary people kept the canal open and running every hour of every day flawlessly and without pause for nearly nine decades.

The entire world owes them a debt of gratitude.

I also thank Lee and Debbie White for their steadfast support, as well as my friends in Cartagena, Colombia, for their help and unfailing hospitality: Alvaro Sierra, Norm Bennett, plus George Baker and Jorge Araujo of Comexa Co. They really do make one of the best and most fragrant hot sauces in the world: Fiery Green Amazona.

Finally, I thank Rogan White for his assistance, and Dr. Roy Crabtree and Lewis Bullock for allowing Doc Ford to help with their grouper research.

Dr. Floyd L. White, a good man. The great Totch Brown who did not share Tuck’s negative qualities. Mark Bryant, Larry Burke and all the fine editors at Outside magazine who kept me on the road. And the Panamaniacs.

E-mail is not to be used to pass on factual information or important data. It is for departmental use only.

The village of Gamboa in the former Panama Canal Zone is a real place and, I hope, accurately described, but it is used fictitiously in this novel. The same is true of Sanibel Island and Cartagena, Colombia. In all other respects, this novel is a work of fiction. Names, characters, places and incidents are either the product of the author’s imagination or are used fictitiously. Any resemblance to actual persons, living or dead, or to actual events or locales is entirely coincidental.

I
t was Tomlinson who suggested that I write about Panama; that I review on paper what happened and how it happened. He told me, “It might be good for your soul, man. Kind of a purge deal. Your tummy’s upset, you pop a couple of Alka-Seltzers, right? Maybe eat some stewed prunes, get rid of the bad stuff. Same thing. Put it down on paper and it’s gone.”

I was on the deck of my stilthouse at the time, Dinkin’s Bay Marina, Sanibel Island, southwest coast of Florida.

Lately, I’d been doing lots and lots of pull-ups.

I told Tomlinson that my soul was doing just fine, thank you very much.

Three days later, I said to Tomlinson: “Write it all down, huh?”

He was momentarily confused, but then he was right there with me. It is, perhaps, because Tomlinson is always lost that he is also endlessly empathetic. He said, “Just a suggestion. I got to tell you, Doc, you haven’t exactly been yourself. When you look inward, man, your eyes actually change color. What used to be your Gulf Stream stare? Kicked back, friendly, drifting? It is now gray, dude, seriously gray. I mean like boiled beef. Not a pretty sight. Or maybe get some counseling. We catch a virus, we go to the doctor, no big deal. So we get an emotional virus, what’s wrong with getting a little psychiatric help? Christ, I spent a year making wallets and signing my letters, ‘Sincerely as a fucking loon.’ And look how together I am now.”

I said, “Right. Your stability is … well … right out there for anyone to see.” Then I said, “Like a kind of intellectual exercise.” I was still discussing the prospect of writing.

“An exercise, sure. That’s one way of approaching it.”

The difference between patronization and kindness is intent. I was being treated kindly. Still … it struck me as having interesting potential.

The human animal is accurately named. And I am, after all, a biologist.