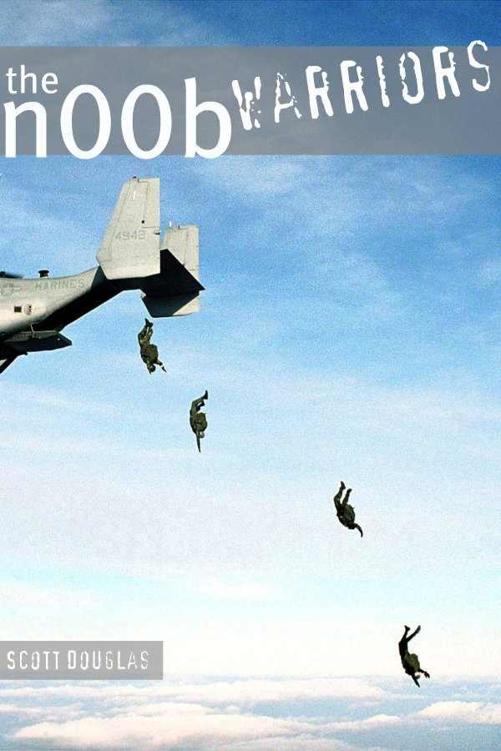 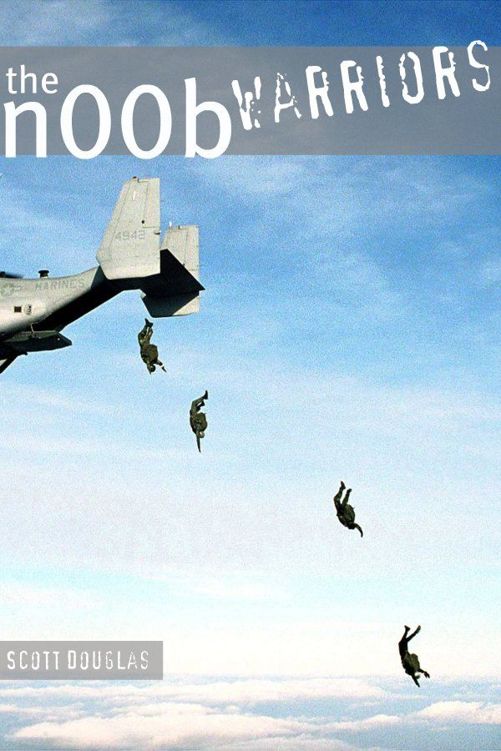 For the past year, my agent sent the pages that follow to dozens of editors. Many of them offered kind words, but there was one general complaint: It is too violent.

It is true that what you will read is, at times, violent, and, if that’s not for you, then stop! When I started working on the book, I wanted to create something that spoke to readers who loved playing video games; I hope that this book does that.

This book was originally drafted as a series. I hope to one day continue with the saga. It would be much easier to do so with your support! If you like the book, express so by rating this book, telling a friend, and telling me! I love hearing from readers. So if you’d like to drop me a line, you can do so by sending an email to:
[email protected]
. You can also email me at this address to ask for a free copy in MS Word, ePUB, or PDF.

Special
thanks to Kayla D. Rau for providing edits to this newest version of the book.

n00b
– From the Gamer Community, a neophyte in playing a particular game; used as a disparaging term. (from Oxford English Dictionary)

A blog entry started the Forever War. It had been fifteen years since that blog.

Dylan Austen’s father, James, was trying to tell him about the blog, but Dylan stopped him.

“I don’t care about the blog or this war. This is your war, not mine.”

“That kind of attitude will get you in trouble one day, boy. Show your rebel pride!”

From the porch, Dylan looked at the smoke in the distance, and imagined the fighting that was ensuing beneath it.

The California borders had been secure for most of the sixteen years that Dylan had been alive; the fighting on the western front had been mostly along the Washington / Canada border—over a thousand miles from Dylan’s home in Carlsbad.

The smoke in the distance and the booming sounds that came with it had become familiar to Dylan over the past several weeks—ever since his father had returned from war missing one of his legs. Every time Dylan saw the smoke or heard the sounds, he knew that the war of his father would soon come for him, and he would have to fight in a war he did not understand.

Dylan watched a fighter jet making its uneven way across the horizon, flames coming from its wings. As it got closer, it made a long, hollow, screeching sound. He kept watching until he could see it no more, and then waited for the explosion. When it came 15 seconds later, and it shook the ground.

Dylan’s father came hopping out the front door so anxious that he forgot his crutches. He supported himself on the doorframe and scanned the horizon until he saw the smoke that indicated where the plane had crashed. He brushed his long bangs back from his eyes and squinted. “Was it American?”

“I couldn’t see. Too high up,” Dylan replied, staring at the stain on his father’s collar. Like Dylan, and everyone else in Carlsbad, James’s clothes were all used. It was rare to find someone wearing a shirt or a pair of pants that didn’t have a tear, stain, or hole somewhere on it. Most of Dylan’s father’s shirts were novelty t-shirts, which were given away free to veterans. Today’s featured a small dog with the a caption, “¡Yo quiero Taco Bell!” His father had told him it used to be the advertising slogan for a fast-food chain.

looked disappointed. “I once shot down one of those Coco Puffs with a single bullet from my pistol.”

“It looked like it was heading for the Mexican border.”

“It was a Coco Puff, then—had to be.” Satisfied, he hopped towards Dylan, patted him on the shoulder, and said, “Small victory for America, son—every one counts.”

Dylan nodded, then helped his father back inside to the couch, where he had been watching a recording of the nonstop coverage of the Forever War; the reception on the TV had gone out the year before, and recorded footage was all they had. The war department had sent the recording home with James along with a medal. Dylan’s father now took the medal from his pocket and rubbed it as he continued to watch the news.

“A recruiting truck is coming!” Jacob, Dylan’s 10-year-old brother, said as he ran into the house. “I just saw it down the street!”

Dylan walked to the door and saw the truck making its way slowly down the street. It was old and rusty; its Army-green paint was fading and chipping away. A kid Dylan’s age drove the truck, while an older man sat in the bed with a megaphone.

The man’s face was badly burned, and a scar covered the left side of his neck. Dylan’s father had a similar scar on his neck. The man’s arm shook as he lifted the megaphone to his mouth and said, “By order of the President of the United States, all able-bodied men and women 13 to 30 are to report by six o’clock to the main entrance of Legoland for immediate deployment. Cowards will be shot.”

Dylan’s father stood up quickly, too quickly to balance himself on his one leg, and fell to the ground. “Amy! Amy, did you hear? They’re finally shipping out our boy! Not the couch, boy!” James said as Dylan began to help him back up, “Take me to the bathroom. All this excitement makes me have to pee!”

Dylan’s mother, Amy, entered the living room with a steaming frying pan. Her eyes were watery. “He’s only sixteen.”

Amy had gotten pregnant just after James’s return. He said he was under orders from the President to make new soldiers to replenish what was lost and continue the fight.

“Dinner will be in ten minutes,” Amy said, trying to hold back tears as she walked away.

“Do you think they’ll take me?!” Jacob asked.

“You still got three years ‘til you reach recruiting age—but if you bulk up a bit, I bet when you’re twelve you’ll be able to lie your way in.” James turned to Dylan. “I can hardly hold it in—come on and help me before I wet myself!”

Dylan took his father’s arm and put it over his shoulder, then helped him to the bathroom.

“Pride of country is not something learned,” James said as he dropped his trousers and Dylan sat him on the toilet. “It is something acquired—you’ll know this real soon. Go get packing and I’ll call your brother when I’m done—it’s going to take me awhile to finish up.”

As Dylan walked away, his father hollered, “Take plenty of socks—when you’re walking all day, a good pair of socks is what’s going to separate you from the rest. You can take some of mine—I only need half as many now that I only have one foot!”

Dylan surveyed his room. He spotted his backpack under a pile of dirty clothes, and he emptied the contents of it onto his bed. All of his clothing was too old, too small, or too big; his mom got them at the Army trading post. After all the retail stores closed down in Carlsbad, the Army came in and offered secondhand goods and clothing. Usually his mother traded aluminum cans, which the Army could recycle into ammunition.

He thought back to when his sister, Chelsea, left for war He was only 10. The recruiting trucks didn’t parade through the streets then like they had today; the recruiters went right to the high school and asked for volunteers. Chelsea was the first one to raise her hand. She was brave—much braver than Dylan. He walked with her the day she left for the Army buses that would take her away, and said, “I’ll join you one day.”

Chelsea hugged him tightly and said, “You’re too fragile for war, little brother—stay home and take care of mom.” Dylan didn’t believe her then, but he did now. He would never be ready for war, but that didn’t matter, because he’d have to go anyway.

Dylan stood in front of the mirror on his closet. He had his father’s brown wavy hair, but that was it. He flexed his arms and looked at his lack of muscles, and then acknowledged to himself, “I won’t last a week.”

“What are you looking at?” Jacob said, entering the room.

Dylan jumped back, embarrassed. “Nothing.”

“What are you going to take?”

“I don’t know? What are you supposed to take?”

Jacob began going through Dylan’s drawers and tossing boxers and socks onto the bed. “I bet they give you a uniform, but Dad says it’s always good to have extras of these.” His eyes lit up. “I read about a guy in
Soldier Magazine
that lived in the woods for three years, and all he had was one pair of clothes. He killed like two hundred Cocos too, I think.”

Dylan went to his desk and pulled out his iPod. Last week, his teacher told his class for homework they were to make a playlist of battle music—something that would inspire them to fight harder. He tossed his iPod onto his bed and continued going through the desk, collecting anything that seemed useful: PSP, small flashlight, pen, paper, seven dollars in bills, one dollar in coins, and the Swiss Army knife his father gave him when he returned from war all made their way onto the bed.

Jacob got down on the floor and began doing pushups. “How many can you do?”

Dylan watched his brother for a moment, then admitted, “Never really counted.”

“I can do a hundred.” He counted off to 10, and then stood. “Do you think they’ll give you one of those big guns like the characters always have in video games?”

“It’s pretty close. Why do you think the schools make us play them all the time?”

“Because they ran out of things to teach?”

Dylan looked at a stuffed animal on his bed; he had several others next to it. He picked up the one closest to his pillow and looked at its eyes.

Mirrors of the Soul by Gibran, Kahlil, Sheban, Joseph, Sheban, Joseph
Surprised By You (The By You Series) by Harper, Kelly
Tales From A Broad by Fran Lebowitz
Polly's Story by Jennie Walters
Awaken to Danger by Catherine Mann
Surrendering to Us by Chelsea M. Cameron
Cameo and the Vampire by Dawn McCullough-White
Orion and the Conqueror by Ben Bova
5 Frozen in Crime by Cecilia Peartree
For Better Or Worse by Payne, Jodi
Our partner