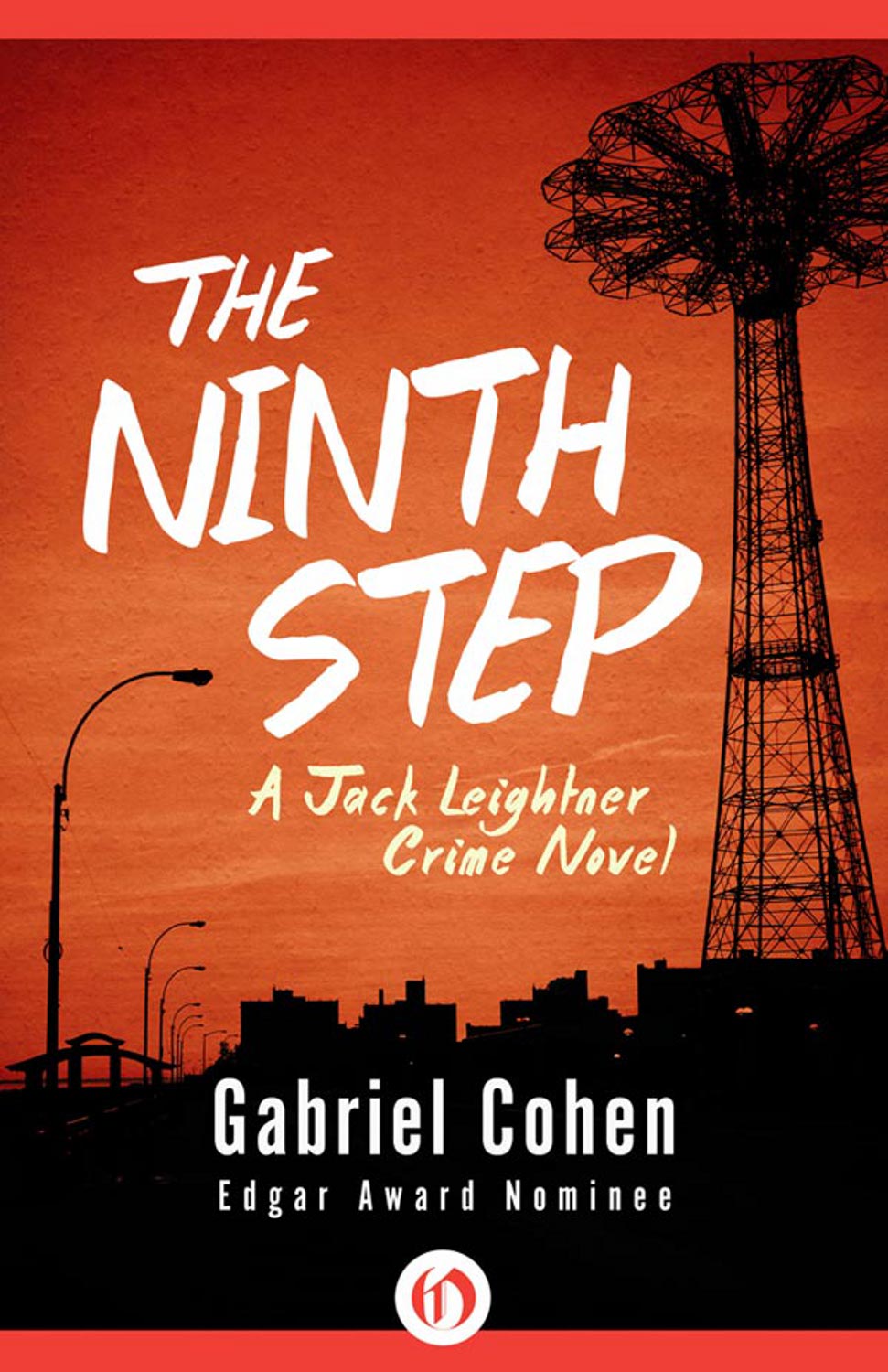 PRAISE FOR THE WRITING OF GABRIEL COHEN

“[A] sophisticated contemporary noir … What Cohen does so well here is to give us everything we require from a cop story … and then so much more: There’s a documentary panache to his depiction of Brooklyn and its history.” —
Los Angeles Times
on
Red Hook

“Gives you a real feeling for the neighborhood … [An] outstanding first novel.” —
The New York Times Book Review
on
Red Hook

“At a time when some of the older masterful cop writers, like Ed McBain, are dying or just fading away, Cohen’s appearance comes as a relief and pleasure.” —
The Washington Post Book World
on
The Graving Dock

“Intricate, atmospheric, funny, and enthralling. An impressive crime novel from a powerful, promising writer.” —George Pelecanos, author of
The Night Gardener
, on
The Graving Dock

“A murdered friend, a beautiful widow and the borough of Brooklyn loom large in this superb installment from NYPD Detective Jack Leightner… . An impeccable procedural plus a poignant love story, intelligent, understated and refreshing.”
—Kirkus Reviews
, starred review of
Neptune Avenue

D
ETECTIVE JACK LEIGHTNER WAS
struggling to extricate half a bagel from his toaster when the doorbell rang. It was a day off from work and he just wanted to sit in his kitchen and eat breakfast in peace. He was tempted to ignore the bell, but it rang again. As he walked out of his kitchen, half his mind was preoccupied with remembering to unplug the toaster before sticking a fork in, and the other half was busy imagining what might happen if he didn’t. Electrocution was a pretty rare cause of death, yet he had seen a few startling examples in his years with Brooklyn South Homicide.

The hallway of the house he shared with his elderly landlord was musty, and carpeted with a layer of Astroturf. (Mr. Gardner was a home fixer-upper, but he tended to improvise with found materials.) As Jack approached the door, he saw a vague figure standing outside beyond the frosted glass. The mailman? No, it was Sunday. He shook his head: maybe a Jehovah’s Witness.

A stranger stood there, a middle-aged, stoop-shouldered black man, several inches taller than Jack. He wore black pants, a white shirt, and a frayed gray windbreaker.

The man’s cheeks were spotted with dark freckles, and the skin under his eyes was droopy. He looked like he had seen more than a few miles of bad road.

“That’s right,” Jack said. “How can I help you?” He lived in the quiet Brooklyn neighborhood of Midwood; one of its benefits was that unexpected visits were rare.

“Could I take a minute of your time? I don’t mean to bother you.”

Jack frowned. In his experience, people who said that they didn’t mean to bother you actually meant to do just that. “Are you selling something? I’m sorry, but I’m not interested.”

“No, sir,” the man replied. “I’m not selling anything at all. Would you mind if I come in for just a minute?”

Jack crossed his arms. “Why don’t you just tell me what this is about?”

The man bowed his head for a moment, and then he raised it. “With all respect, I don’t think this is something you’ll want to discuss out here on the stoop.”

Jack didn’t like the sound of that—it was something he often said before breaking the news to relatives of homicide victims. “I don’t generally invite strangers into my home unless I know what they want.”

The man stared at him for a moment, then sighed and shook his head. “Of course not. I wouldn’t either.” He looked away for a moment and watched a neighbor trundle her shopping cart down the street. The day was bright and sunny and a dogwood tree was blossoming above the sidewalk. (Later, when Jack recalled this day, he would envision this splash of pink, like a bomb going off.)

The stranger turned back. “I don’t suppose you recognize me. I didn’t think you would.”

Jack’s first thought was of the .45 service revolver sitting on top of his bedroom dresser. As one of only about a hundred NYPD members of service who had earned the designation Detective First Grade, and one of the most seasoned and determined of that elite bunch, he had helped send quite a number of men to prison. Very few had been accepting of their fate. “Excuse me for a second,” he said. “I left something on the stove. I’ll be right back.”

Jack ducked back into his apartment, grabbed his handcuffs and crammed them in his back pocket, and stuck the .45 in a pocket of his sweatshirt. It looked pretty obvious in there, which was fine with him. He returned to the front door.

The stranger was sitting on the stoop. He turned to stare up at the detective and immediately took in the new situation. “I don’t think you’re gonna need the piece. I’d just like to talk to you. Are you familiar with Alcoholics Anonymous?”

The stranger took a wrinkled piece of paper from his pocket, lifted it close to his mournful eyes, and read aloud. “Step Eight: we made a list of all persons we had harmed, and became willing to make amends to them all. Step Nine: we made direct amends to such people whenever possible, except when to do so would injure them or others.”

Jack felt his throat tightening. “Who are you? What do you want?”

The man folded the piece of paper and stuck it back in his pocket. He placed his hands carefully on his knees, looked away, and cleared his throat. When he looked back at Jack, his eyes were troubled and piercing. “You had a brother,” he said. “I believe his name was Peter. I was the boy who killed him.”

Jack felt a roaring in his ears and then the ground fell out from under him; he was hurled back to a warm November morning in 1965.

PETEY KEPT SINGING, “HELP
Me, Rhonda.” He loved to sing, Jack’s two-years-younger brother, a lively thirteen-year-old with the biceps of a serious athlete. They were playing hooky, roaming aimlessly around Red Hook, their waterfront Brooklyn neighborhood. They had killed some time tossing pebbles at seagulls, out on one of the piers, and now they were strolling up Sullivan Street, past a vacant lot.

Petey was playing with a Spaldeen, and the little rubber ball took a bad bounce into the lot, beneath an old abandoned trailer. That’s where he discovered the hidden case of Scotch, probably swag boosted out of a ship by some sly longshoreman.

They pulled it out, and were hurrying up the street to go hide the liquor in their friend Joe Kolchuk’s basement when they were approached by two Negro kids, bigger and years older. Jack was holding the case. One of the strangers, wearing a green Army jacket, slammed Petey up against a wall; the other, a kid with a big Afro, demanded that Jack hand over the booze.

That was when Jack saw the patrol car moving slowly up the street, a couple of blocks away. And he said something he’d have a lifetime to regret. He stared defiantly at the kid with the Afro. “You gonna make us?”

Petey looked scared. “Just give it to them, Jack.”

He held onto the case.

“I’m not gonna ask you again,” the kid with the Afro said.

The others, including Petey, looked at him in disbelief.

“What did you say?” the Negro asked.

“I said, Fuck you and your nigger friend.’” It wasn’t like he really had anything against black people—he ran with kids of all colors in the projects—but he saw the patrol car coming and he reached for the easiest jibe.

The kid who had Petey up against the wall pulled out a switchblade.

“Whoa,” Jack said, going pale. “Look, I’m gonna hand it over.” The cops were just a block away. He started to put the case down, and then he looked up the street and saw—to his horror—that the patrol car had pulled to the curb. The cops jumped out and went into a diner.

Petey began to struggle. And then Jack watched the kid holding his brother click the knife open and stab him. (He might well have stabbed Jack instead, if he hadn’t been holding the case of liquor.) The guy only used the weapon once, but that proved more than enough. Petey put his hand under his shirt and it came out all covered in blood. He stared at Jack as if confused, and then he fell to his knees, and onto his side. He never got up.

The two assailants ran off down a side street, never to be found.

His brother’s murderer stood up slowly, hands half-raised. Jack looked around to see who might be out on the street, watching, but there was no one. He followed the man into the foyer, and took the gun out of his pocket. “Keep walking. Straight on through.” He marched the man into his kitchen and ordered him to sit in a wooden chair, next to the red Formica table.

“Put your hands behind your back.”

The stranger complied, and Jack cuffed him.

Jack lifted the pistol and held it against the man’s right temple. The stranger seemed oddly calm, but Jack’s own breath had grown erratic, shaky. He closed his eyes for a second, saw red behind his lids, contemplated how good it might feel to apply a little pressure to the trigger. How it might put a salve on a lifetime of guilt.

After a moment, he opened his eyes. He had dedicated his life to catching killers, and he wasn’t about to go over to the other side. “I’m not going to shoot you,” he said.

Jack scowled. “You dumb bastard. There’s no statute of limitations on homicide.”

“I know the law,” the man replied. “And I’m not scared of prison. I’m just coming off a ten-year bid in Green Haven. That’s where I found AA.”

“Good for you,” Jack said. “I’m sure they’ll be thrilled to have you back.”

The stranger shrugged. “You can do whatever you want with me. I ain’t afraid of dying, and I ain’t afraid of going back in. I’ve made my peace with the Lord.” He bent his head down to scratch his chin against his shoulder. “There’s just one catch. If you shoot me, or send me up, you’ll never find out why I killed your brother.”

Jack almost spat his reply. “I know damn well why you killed him, you piece of shit.”

“C
HECK IT OUT,” SAID
Detective Richie Powker the next day. He held up a small plastic-wrapped package. “Little Debbie snack cakes! I used to love this crap when I was a kid.”

Bride of the Wild by Carré White
The Invisible Amateur by Amelia Price
City of the Falling Sky by Joseph Evans
A Skeleton in the Closet (Kate Lawrence Mysteries) by Ivie, Judith K.
Close Encounter by Deanna Lee
Damaged by Alex Kava
The Gazebo: A Novel by Emily Grayson
Love Is Never Past Tense... by Janna Yeshanova
The Bay by Di Morrissey
Dauntless (Sons of Templar MC) by Anne Malcom
Our partner