Read The Other Schindlers Online 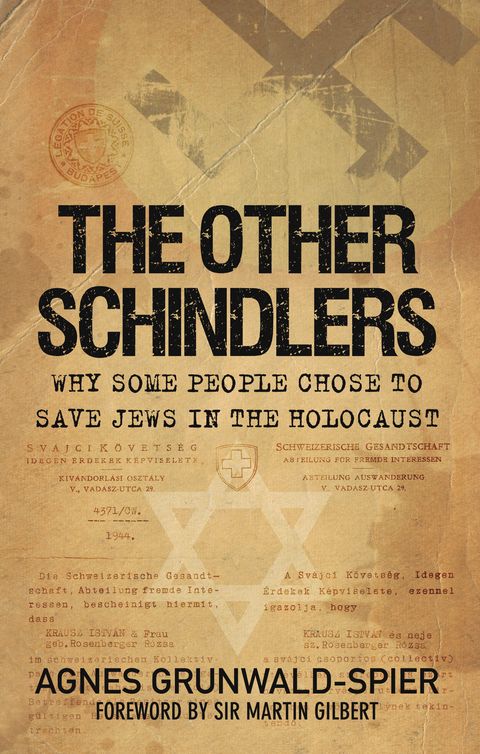 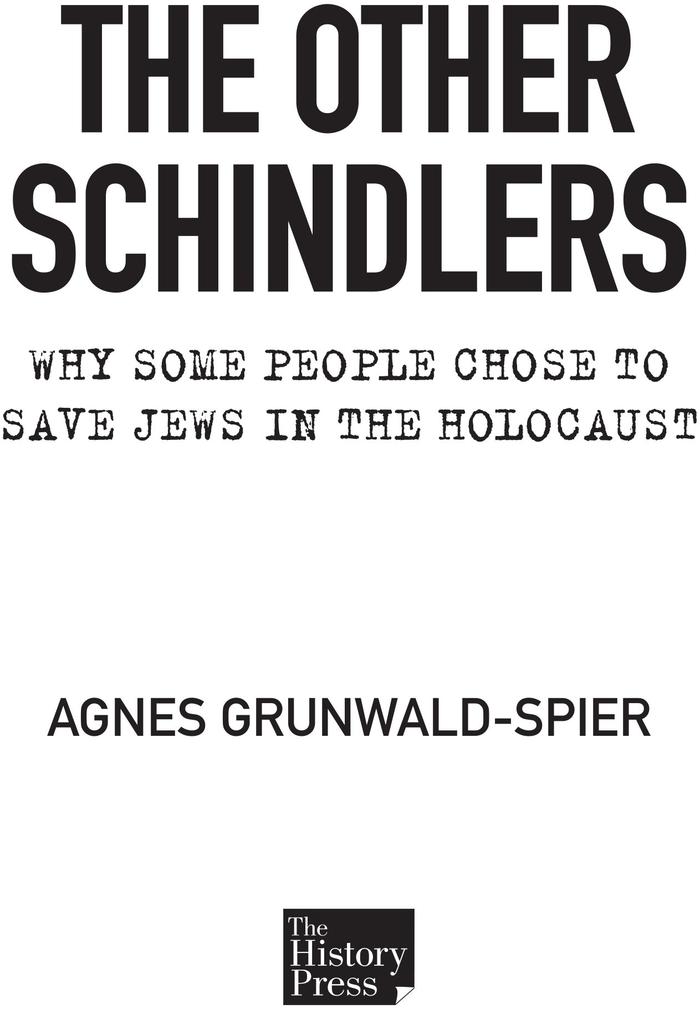 I felt the Jews were being destroyed
I had to help. There was no choice.

You are a shining light amidst the darkness of the Holocaust;
your stunning bravery is a testament to all humanity.

HE Dror Zeigerman, Israeli Ambassador in London, when presenting Henk Huffener with his Righteous Among the Nations Medal 3 February 1999

3
Rescuers with Other Motives

Appendix I
Righteous Among the Nations & Yad Vashem

Table 1
Details of Rescuers and Informants

Table 2
Righteous Among the Nations and National Populations

Table 3
Details of Rescuers and Rescued

It gives me great pleasure to write these few words about Agnes
Grunwald-Spier’s
book about the rescuers. No one can read these pages without a renewed sense of admiration for those who risked their lives to save Jewish lives. Both the stories themselves, and the motives of the rescuers, are examined in this powerful, thought-provoking book, the product of many years of research and effort.

Each story is precious. Each story throws more light into the dark recesses of those evil times. Each story can inspire by its strength of moral purpose.

Agnes Grunwald-Spier makes reference to an important, unavoidable gap in the recognition of righteous deeds. There were many hundreds, even thousands of acts of rescue that failed, mostly through betrayal by a neighbour or a local
collaborator
, of which no testimony survives: individuals, and even whole families, murdered because they were caught saving Jews. Usually at the very moment of discovery the would-be rescuers and those they were seeking to save were
murdered
by a savage occupation authority for whom attempting to rescue a Jew was a crime punishable by death. Records of German-occupied Poland show how widespread these reprisal killings were.

Where the names are not recorded, the historian cannot piece together a
narrative
, and no honour can be bestowed; Agnes Grunwald-Spier rightly calls this a ‘tragic fact’.

But this is not in any way a negative book. Its stories are inspiring ones. There is great suffering in these pages, and also great nobility. Agnes Grunwald-Spier has written a book that can serve as a vista of hope for mankind, a modern-day manual for a code of conduct that contrasts with, and can redeem, the selfish, negative, destructive impulses that are still with us today in far too many areas of the globe.

A ‘thank you’ seems inadequate to the large group of informants whose life stories have made this book possible. However, I am most grateful to them for their patience and time and also the information on which this book is based. I started my research in 1999 and so in many cases we have had contact over several years and developed a warm friendship. This book tells their extraordinary stories and I could not have written it without them. Sadly, some of my original
informants
have died since I initially consulted them but often other members of their family have taken over the role:

John Paul Abranches of California, for information on his father Dr Aristides de Sousa Mendes, a rescuer in Bordeaux. John Paul died in February 2009, but his nephew Sebastian Mendes has provided additional information.

Olympia Barczynska of Leeds, for information on her uncle Jozef Barczynski, a rescuer in Poland.

Miriam Dunner of London, for information on her rescuers Jelle and Elizabeth van Dyk in the Netherlands. Miriam died unexpectedly in 2006.

Betty and David Eppel of Jerusalem, for information on Betty’s rescuers Josephine and Victor Guicherd in France. David died in 2008.

Charles and April Fawcett of London, for information on Charles’ work as a rescuer in Marseilles. Charles died in February 2008.

Otto Fleming of Sheffield, for information on Mitzi Saidler, a rescuer in Vienna, and Dr Ho’s visas to Shanghai. Otto died in 2007. His widow, Dorothy Fleming, a member of the Kindertransport, has provided additional information.

Milton Gendel of Rome, for information on the Costaguti family who were rescuers in Rome.

Lea Goodman of London, for information on Richard Strauch and other rescuers in Poland.

Rose Marie Guilfoyle of Brussels, for visiting Robert Maistriau to hear about his role as a rescuer and also telling me about Gisele Reich’s rescue, both in Belgium.

Gerda Haas of Freiburg, for information on rescuers and for first telling me of Else Pintus’ diary about being hidden in Poland.

Agnes Hirschi of Bern, for information on her stepfather Carl Lutz, a rescuer in Budapest.

Manli Ho of San Francisco, for information on her father Dr Feng Shan Ho, a rescuer in Vienna.

Henk Huffener of Guildford, for information on his family’s role as rescuers in the Netherlands. Henk died in 2006 but Philip Hardaker provided information on Henk’s post-war life.

Margaret Kagan of Huddersfield, for information on her rescuer Vytautas Rinkevicius in Lithuania.

Claire Keen-Thiryn of Belgium, for information on her family’s work in the Resistance and as rescuers in Belgium.

Josie Martin-Levy of California, for information on her rescuer Soeur St Cybard in France. Additional help was provided by Daniel Soupizet of Lesterps, Bernadette Landréa of Confolens and Louis Lacalle, great nephew of Soeur St Cybard.

Ron Mower of Hertfordshire, for information on Hermann Maas, who rescued Martha, his wife, and Paul, his brother-in-law, in Germany. Sadly, Ron died in 2004 and Paul in 2009. I am grateful to Ron and Martha’s son Paul for his support.

Monica Porter of London, for information on her mother Vali Rácz, a rescuer in Budapest.

Jaap van Proosdij of Pretoria, South Africa, for information about his rescues in the Netherlands.

Maria Sanders of Poole for information on living in the Hague during the war, particularly the ‘Hunger Winter’ of 1944.

John Schoen of Glamorgan, Wales for information on his parents Joost and Anna, who were rescuers in the Netherlands. John died in 2007. I am grateful to his son Peter Schoen, his nephew Ed van Rijswijk of Amsterdam, and Arleen Kennedy of Massachusetts, whose mother was hidden by the Schoen family, for additional information.

Angela Schluter, for information on her mother Edith Hahn-Beer’s story of rescue in Austria.

Doris and Ernest Stiefel of Seattle, for information on Else Pintus and her rescuers in Poland.

Naomi Szinai of London, for information on her rescuers, in particular János Tóth, in Hungary.

Margarita Turkov of Oregon, for information on her paid rescuer Pani Borciñska in Poland.

Henry Walton of Worksop, for information on the rescuers of his parents, Siegmund and Grete Weltinger, in Berlin.

Additionally, there are several other people I’d like to thank here. Three people in particular encouraged me through the long and difficult times between research and publication: Emeritus Professor Aubrey Newman of Leicester University was a kind advisor and also helped with proofreading; Kevin Patrick was a consistent support; and my dear friend Brenda Zinober held my hand through some
difficult
times. All three were always there for me when I needed their support.

I would also like to thank Sir Martin Gilbert for his support over many years and for kindly writing his generous Foreword when he was so busy with the Chilcot Inquiry.

Thanks go to the staff of the British Library, the Freemasons’ Library, the Friends’ House Library, the Wiener Library and Yad Vashem for their help, and Phil Jacobs, Tom Keve, Bernadette Landréa and Hamish Ritchie for their
translations
from Italian, Hungarian, French and German respectively.

This book would never have happened without the input and
encouragement
of: Robert Smith, who helped me write my book proposal and introduced me to Daniel Crewe, who pointed me in the right direction; my editor at The History Press, Simon Hamlet, and his team of Abbie and Christine, with Hazel, who aided the promotion of the book, who all gave me faith in my work and made publication a very pleasant process; my middle son Ben, who helped in many practical ways, as well as my other two sons Dan and Simon; all
three encouraged me when I flagged. Finally, I remember with affection and
gratitude
my history mistress from Sutton High School, Miss Lucy Clarke (1903–93),
who gave me a love of history which has enriched my life.

Inevitably, even with all this help, there will be mistakes and these, I am afraid, are mine alone.