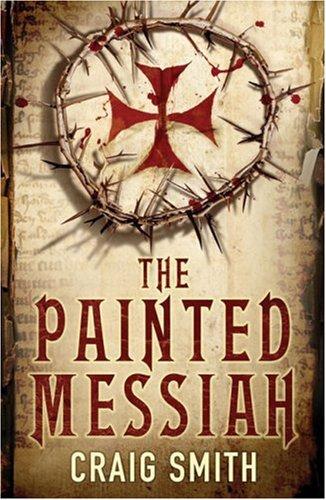 For Shirley Underwood and Martha Ineichen. I am blessed to have you both in my life. 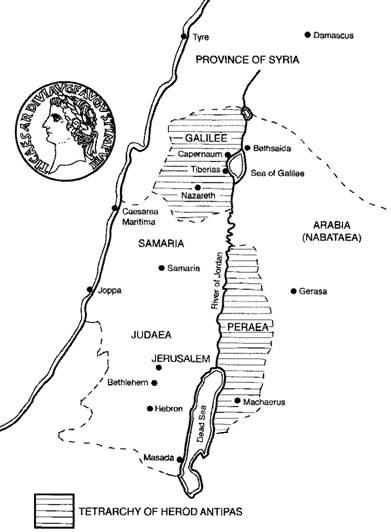 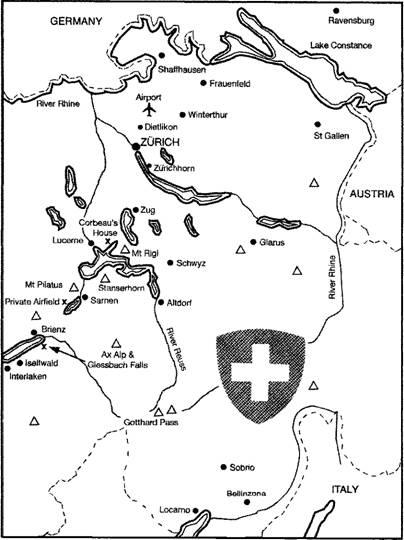 'Will those who have seen him in life know him by this portrait, Theophanes?'

'Most assuredly, sir,' the slave answered. Theophanes had no basis for believing this. Those who had known the Jewish messiah were themselves Jews. As everyone knew, Jews refused to gaze upon any human image.

'It doesn't look much like him now, though,' Pilate offered doubtfully. Theophanes studied the subject of his portrait critically. The man wore rags and a crown of thorns. His head was a bloody mass of contusions.

Theophanes had painted the Jew as he appeared, omitting only the humiliating effects of violence. With the eyes he had created the universal serenity of nobility sitting for a portrait. Theophanes was especially skilled at capturing this effect. In all other matters the slave was faithful to nature. The man was pleasingly robust - having plenty of muscle and a good layer of fat against the cold. His features were regular, the nose large and broad. The eyes were unclouded.

'Perhaps you have noticed, sir, all criminals have the same look at this point in their careers. This . . .'

Theophanes gestured toward his painting, '. . . is the face of the man you saw ride into Jerusalem.'

The prefect's chin kicked up slightly in response. His expression grew more comfortable. That man! The reference excited his confidence. That man had entered the city as the king of the Jews. 'The hair is wrong,' Pilate declared finally, for he would not rest until he had faulted the work of his slave. 'The beard is too short, Theophanes!'

This was not true but, as Theophanes had learned years ago under the lash of a whip, his master was incapable of understanding what he looked at. His sole concern with art - any art - was its power to impress fellow Romans and overwhelm the rest of humanity. He could not comprehend that what he saw he coloured with his own impressions. The hair and beard were correct. The slave had simply depicted what his subject would have looked like emerging from a Roman bath on a late afternoon, had he ever entered such a building. Rather than argue the point, Theophanes answered with the first lie that came to him. 'I have styled the hair and beard as your Jewish friend Nicodemus wears it, sir. I hope that was not indiscreet.'

Pilate liked this very much. Nicodemus, in his view, was the Jew all Jews should emulate. He cooperated with the Roman authority and paid handsomely for his favours. 'I see that now,' he answered thoughtfully. 'Very well, then. See that you attach it to one of the
imago
standards in place of Tiberius . . . and don't forget to hang the letters on the standard. That is the point, after all!'

The prefect had already instructed his slave in this matter, but Theophanes was accustomed to hearing his orders twice. The Romans, as a race, imagined all other nations less attentive to detail.

'I want the standard with this man's image on the wall in my banquet hall in Caesarea when I return.'

'I am to leave Jerusalem ahead of you then?'

Theophanes felt a tremor of fear. Jerusalem was about to erupt in open revolt when they crucified this man. Inside the palace behind the shield of the prefect's guard one could expect a degree of security. In the streets of Jerusalem he would be exposing himself to the violence of roving crowds. They would be looking for easy targets once they had drunk enough courage to forget the fate of revolutionaries.

'Leave at sundown. It will be the start of the Jewish Sabbath, and no one will bother you if you are quick about it.' Pilate considered the matter briefly before he added with a slight, curdling smile, 'So long as they don't see what you carry.' Having given his orders, the prefect called to Cornelius, his most senior centurion, to lead the prisoner to his fate. Pilate then turned away from Theophanes.

One might as well say history itself turned away, for there were no records kept of the lives of slaves. As a rule, they counted themselves blessed above their own kind if their masters even knew their names. Other than chariot drivers the life of a slave inspired no comment, and even the greatest champions of the Circus Maximus in Rome left the arena for the last time without so much as a whisper following them to their graves.

Kate dropped into the lake without a sound. Still under the surface, she kicked away from the boat's stern, disappearing into a long dark alley that twisted between the other boats. Ethan followed nearly a minute later, returning to the surface in the shadows as quietly as he went in. He checked to see if the people beside their boat had noticed, but everyone on deck was looking at the long feathery streaks of a golden fire fading from the evening sky. Not a soul on any of the hundreds of boats surrounding them cared about what happened in the black waters below.

The lake beyond the boats was choppy. A cold summer breeze blew in from the Alps. The light of the pale, smoky moon was too faint to let him find Kate. He saw her only when the sky lit up in a blaze of white light, a silhouette against the shimmering surface of the water.

Kate had already stripped down to her wetsuit and was applying night camouflage to her face when he joined her. Scissor-kicking lazily to keep her head above water, she seemed like a beautiful lady before her mirror. Ethan studied her features while he stripped his own clothes away. Her face was striking, a pleasant mix of feminine delicacy and aristocratic boldness. Eyebrows, nose, and jaw were prominent and refined. It was a face cameras loved. The curve of her eyelids and sweet, round fullness of her lips missed cute by an eyelash. Her laughter had mischief and music. Her sweetness came with passion, her fury with anger. Descended from bastard English royalty on both sides, married and widowed to an English lord, she was tall and blonde, brilliant and connected: ambitious for risk and all things new. She could plot with the patience of an older woman scorned and then take what she wanted with the speed of an urchin.

They had met some years ago by pure chance, or so it had seemed to him at the time. He learned later that Kate was a woman who got exactly what she wanted and left nothing to chance. He had been with two other climbers in the Alps. They had hauled their equipment toward a fairly difficult rock, planning to spend the day ascending it. Kate was by herself with only a litre of water and a sweatshirt at her waist. She approached them while they were still preparing their lines and laying out the pitons. Without saying a word, though indulging herself with a look of casual interest in Ethan's lean muscular physique, she had started climbing. Ethan watched her for a moment before starting after her. It was his first climb without ropes, but he hardly recognized the danger. In fact, all he thought about was the woman ascending the rocks above him with the agility of a lioness. Even though he had considered himself in peak condition, he could not catch her.

'You climb without ropes much?' she had asked, when he had finally joined her at the summit.

He ran his hand through his short dark hair and smiled sheepishly. 'First time.'

He had a pronounced Tennessee accent in those days. Instead of putting her off, as it did with a lot of the Europeans, she seemed actually to enjoy it. 'Is it going to be your last?' She asked this with curiosity and a bit of a dare in her expression. Ethan could still remember grinning and shaking his head. It had been the most exhilarating climb of his life. 'I hope not.'

'Kate Kenyon,' she said and shook his hand.

The following morning they had headed toward the Tyrolean Alps, hitchhiking when they could, catching buses or trains otherwise. One afternoon as they clung to a tiny ridge of stone probably a thousand feet above a field of boulders, Kate had said to him, 'Think we could make a living doing this?' Ethan thought she meant as professional climbers, and laughed at her. She could make a living, but he was a long way from her level. In another few days he would be heading back to the States to start law school at George Washington, all this and Kate Kenyon nothing more than a pleasant memory. But she wasn't talking about rocks. A joke, she told him that night as they lay together in bed. But it was a joke that did not go away. Why did he have to go back? She could go with him, he said. And do what? Anything, anything at all. 'We could do that here,' she had answered. Two evenings before his flight, following what had promised to be their last climb, they were walking under a wall in Como, when she laughed and said to him, 'Come on!'

A moment later she disappeared into a darkened estate. Ethan knew what she meant to do. He knew, too, the smart thing was to walk away, but walking away wasn't really an option. He followed her over and had the thrill of his life stealing a lady's necklace and making love on a stranger's silk sheets. He had been following Kate over walls ever since. Nothing at all intimidated her. She came alive at the point where even the most courageous would hesitate. She loved risk as others loved adoration or money or notoriety. If it was possible, she would try it. If it wasn't, she would try to figure out a way to make it so. Physically, her conditioning and strength could still astonish him.

A golden palm tree etched itself against the black sky, the firework holding its form until the last glowing embers blinked away. As soon as it did, a staccato of heavy explosions boomed across the lake. From the boats huddled together at the centre of the lake a collective sigh drifted toward them. 'Ready, Boy?'

Finishing his face and his memories of those first weeks with Kate, Ethan dropped the tin and pulled on his skullcap. 'Ready, Girl.'

They swam with only the top of their heads breaking the surface, moving quickly toward the dark peninsula closest to them. From time to time, Kate would roll quietly and look behind them, never breaking her forward momentum. The only time Ethan looked back he saw the light of a police patrol boat moving along one of the distant shorelines. Once past the peninsula they waded through a shallow marsh. Deep in the mud and weeds they found their inflatable, a Sea Eagle 9.2. It was exactly as they had left it the night before, well camouflaged and loaded with their equipment. They had stolen it six weeks before because it was light, easily handled and quick enough to get them to the other end of the lake and back.

Mapmaker by Mark Bomback
Scorpion Mountain by John A. Flanagan
Lord Regret's Price: A Jane Austen Space Opera, Book 3 by Joely Sue Burkhart
Unbound by Elle Thorne
Travis by Edwards, Nicole
Icebound (Legends of the Shifters Book 2) by J.B. North
Time of Death by James Craig
A Searching Heart by Janette Oke
When My Name Was Keoko by Linda Sue Park
The Last Crusade by Ira Tabankin
Our partner