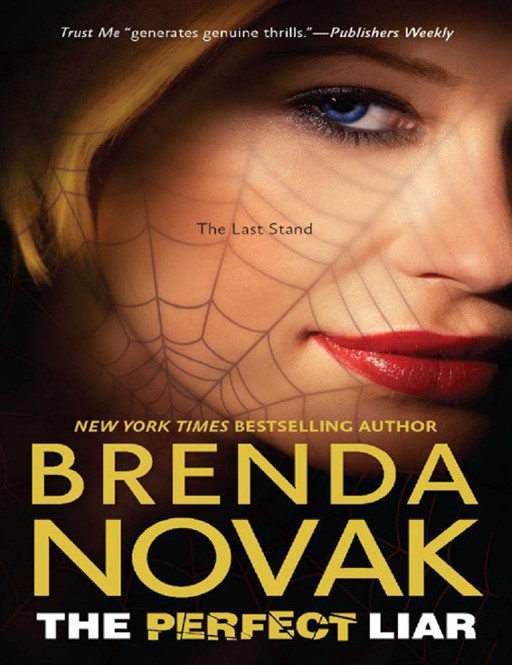 --Romantic Times BOOKreviews
on
Trust Me

"Novak has outdone herself with this series. She is a great storyteller."

--Once Upon a Romance

"
Trust Me
is a page-turner...Sure to become a much-loved keeper-shelf read...I highly recommend
Trust Me
and suggest Brenda Novak be added to your 'to buy' list today. You won't be disappointed--trust me."

"No one can send chil s down my spine as Brenda Novak can."

"When I open a Brenda Novak story, I...delve headfirst into a scene so vividly portrayed that I am with the characters each step of the way."

"The third book in Novak's trilogy is creepy and absorbing, and the characterizations are excellent. Plan to stay up very late to finish this one!"

--
Romantic Times BOOKreviews
on
Watch Me

"Whenever I see a new Brenda Novak book, I buy it and read it, pronto. I 2

can always count on her for a solid, exciting story, full of adventure and romance."

To Marcie, my niece. You're a sweet girl who's easy to be around. Keep up the good work and build a wonderful life for yourself--you can be anything you want to be.

Welcome back to The Last Stand, a fictional victims' charity set in Sacramento, California. If you've been following the series, you've already met several of the characters, but the hero and heroine in this book will be, for the most part, new to you.

Ava took over at the charity when Jasmine married and moved to Louisiana. Ava's an interesting character, so cautious about avoiding emotional entanglements that she lives on a houseboat in the delta. She can pick up and leave at any moment, won't commit even to a location. But she's not quite as free as she thinks, especially after she meets Captain Luke Trussell, a pilot at Travis AFB.

One of my favorite characters in the story is, as usual, the villain. The study of abnormal behavior has long been fascinating to me, perhaps because it's often so self-destructive. I don't always understand why some people act the way they do, but I based the major tenets of Kalyna Harter's personality on a woman I once knew who sued just about every employer she ever had for sexual harassment. She lied and manipulated and used laws meant to protect women to punish the men in her life, not only her employers but also those with whom she had personal relationships. Some of my outrage at her actions has no doubt filtered into this story. Kalyna is very real to me because I've known someone very much like her.

When you get a minute, please visit
brendanovak.com.
There's a lot there--

contests and giveaways, interviews with various professionals in the criminal justice world, 3-D screensavers you can download free, a virtual tour of the offices of The Last Stand, a short prequel to the whole series, and more. If you sign up for my mailing list, you'll be invited to my annual cyber Christmas party, which is a blast. At my Web site, you can learn more about my annual online auction for diabetes research, an event I sponsor every May (my youngest son suffers from this disease). Together with my fans, friends, fellow authors and publishing associates, I've managed to raise over $700,000

I hope you enjoy
The Perfect Liar!

When the sun sets, shadows, that showed at noon But small, appear most long and terrible.

"Y
ou're here
why?"
Wearing only a hastily donned pair of jeans, Captain Luke Trussell stood squinting at the man and woman, both from base security, whose knock had just dragged him out of bed.

"We're responding to a complaint filed by Sergeant Kalyna Harter."

There had to be some mistake. He didn't even live here. He'd lent the use of his off-base apartment to two female cousins visiting from out of state. In the meantime, he'd temporarily moved into a friend's place because it was empty while that friend and his family were on leave.

"Against
me?
" He raised a hand to his bare chest.

One of the officers, Sgt. E. Golnick according to her name tag, let her gaze range over his upper torso. Although female attention had little to do with why he worked out, it was a fringe benefit. But her expression revealed more contempt than appreciation. He could tell she was taking note of his size and musculature, thinking how easy it would be for him to overpower a woman, any woman, even a woman like Kalyna, who was five-ten and lifted as regularly as he did.

"Yes,
you,
" she responded, her eyes shifting to his face. "You know her, right?"

"Yeah, I know her. She's in my flying squadron, has been since she as transferred here three months ago." Which was how they probably knew where he was staying. She must've told them.

"She's claiming you raped her last night, Captain. From the look of her, it was a brutal attack."

A brutal attack?
Kalyna had been perfectly fine when he left her apartment only--how long ago? He glanced at his wrist, then remembered 11

that she'd removed his watch when he started saying how late it was. She hadn't wanted him to leave her bed. Was this her revenge for doing so, anyway? Or had she been hurt by someone else--badly enough that she didn't know what she was saying? "Is she going to be okay?"

"She's got some nasty bumps and bruises," Sgt. P. Jeffers, Golnick's counterpart, chipped in. "It's nothing life threatening, but she's spent the past five hours at Northbay Medical Center being examined for sexual assault."

Luke shook his head. "This doesn't make sense. If she was assaulted, someone else did it."

A rush of anger burned away his sleepy confusion. "She must be out of her mind, delirious."

One eyebrow slid up. "They've extracted semen from her body. Are you telling me it won't prove to be yours?"

Golnick folded her arms. "You didn't have sex with her?"

Luke rubbed his neck. He hated discussing such personal matters--

especially when all he wanted to do was forget--but he had to explain fast and be frank. If he didn't, there could be more trouble. "We had sex, yes,"

he clarified. "But it was consensual."

"Consensual means you both agreed."

He gave her what he hoped was a withering look. "I know what it means."

She stood her ground. "The fact that you didn't use a condom might suggest otherwise."

"Then how do you explain the semen?"

He couldn't. But it wasn't as if last night was a complete blur. It was just that he remembered some details more than others. And it didn't help that he was hung-over. "Maybe it broke..." He hadn't noticed anything unusual, but he'd drunk more than he had in years. And once he started 12

sobering up, he'd been anxious to get home. "I didn't hurt her. I can promise you that. I'm sorry if someone else did, but I've never struck or forced a woman."

"You keep mentioning someone else."

"So what do you suggest happened? Are you assuming someone came in after you left?"

"That has to be the case," he said. "It isn't as if I'm some predator out trolling for women.
I
wasn't the one who wanted to hook up last night.

Kalyna got into my cab and gave the driver her address. I thought we'd already said good-night."

"Some men might think that means she's asking for whatever she gets."

He could easily recognize the trap in that statement. "Some men, but not me. Quit trying to twist whatever I say. I'm just telling you how we got together. If I was a rapist, don't you think I'd be the aggressor?" That was how
he
pictured rapists, but Kalyna had been chasing him for weeks. She managed to bump into him all over the place, even when they were off work and off base. He'd been able to feel her interest from the moment they were introduced, could stil remember how her smile had widened at the sight of him, how she kept trying to engage him in conversation.

"She said you asked to go home with her and she refused but later relented." Jeffers added this with some doubt in his voice, so Luke appealed to him.

"That's a
lie!
I didn't even ask her to
dance
with me. I've never been attracted to Kalyna." In his opinion, Kalyna was too masculine--at least in the light of day. And he'd been able to tell from very early on that she was too controlling. He avoided her if he could, but it was impossible to avoid her entirely. She was his crew chief, which meant she performed preflight, through-flight and postflight inspections and fixed anything that went wrong with his jet.

"If you weren't attracted to her, why'd you have sex with her?" Golnick asked.

Luke hadn't planned on touching Kalyna.
She
was the one who asked him to dance and kept rubbing up against him, whispering in his ear:
You
13

make me so hot...When you gonna show me what you've got in your pants,
Captain?
Even then, he hadn't been tempted until later on, after he had a good buzz going.

"To be honest, I don't know," he admitted with a sigh. He'd just let the sultry promise in her voice overcome his better judgment.

Golnick peered behind him, into the Craigs' house, as if she might see something there that would provide proof of his guilt. "Why don't you get dressed?" she said. "We need you to come down to the squad room to make a formal statement. We've notified your commander. He's meeting us there."

Formal statement
rang like a death knell in Luke's head. They were taking him in. This was serious. After all the bad press such stories had received in the past, the military had grown very intolerant of any kind of sexual misconduct. A wink or a nod or even a smile could be termed sexual harassment and ruin a guy's reputation, maybe his career. And here he was, accused of much worse. It didn't matter that he was innocent. He'd
look
guilty. To anyone else, the chances of a second person coming in after he'd left Kalyna had to seem minute; he'd been with her until three in the morning. Beyond that, he was bigger and stronger than she was, which meant public support would remain firmly in her favor. This was the one situation where, even in America, a guy was guilty until proven innocent.

Red by Alison Cherry
DARE THE WILD WIND by Wilson Klem, Kaye
Fire Burn and Cauldron Bubble by H. P. Mallory
The Kingdom by the Sea by Robert Westall
Breaking the Silence by Diane Chamberlain
Before The Killing Starts (Dixie Killer Blues Book 1) by James Harper
In Heaven and Earth by Amy Rae Durreson
Eoin Miller 02 - Old Gold by Stringer, Jay
Meeting Danger (Danger #1) by Allyson Simonian, Caila Jaynes
What I Did by Christopher Wakling
Our partner