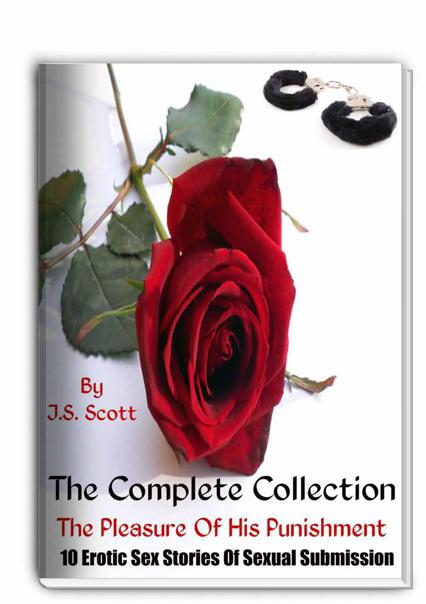 THE PLEASURE OF HIS PUNISHMENT : THE COMPLETE COLLECTION

The Billionaire Next Door
Copyright © 2012 by J.S. Scott

THE MILLIONAIRE AND THE LIBRARIAN
Copyright © 2012 by J.S. Scott

SECRET DESIRES OF THE COUNSELOR
Copyright © 2012 by J.S. Scott

JUST WHAT THE DOCTOR ORDERED
Copyright © 2012 by J.S. Scott

Wicked Romance Of A Vampire
Copyright © 2012 by J.S. Scott

It all started over a cat.

Holly West cursed as she jumped and threw her leg over the ornate, black, metal fence.  She wasn't tall, but she could jump high enough to grip the top and pull herself over.  She landed with a graceful leap to the ground on the opposite side and frowned as she looked back at the offending barrier.  It had sharp metal posts along the top that could have ruptured several vital organs.

Her brow continued to wrinkle as she gazed at her camera and equipment on the other side of the fence.  She hated to leave it, but wasn't about to scale this fence trying to carry her equipment.  It would just have to wait until she returned.  It was a beautiful summer day and it wasn't likely to get stolen.  Her small log home and this opulent. extravagant residence were the only ones in the general area.

She lived in the perfect place for her work as a photographer.  This thriving mountain community was home to some of the most breathtaking vistas and harbored some fantastic wildlife.  Her small studio in town and various other types of contracted photography paid the bills...but photographing outdoor shots, especially wildlife, was her real passion.

She turned from the fence and started striding toward what sounded like a cat yowling.  Holly had a weakness for cats.  With two of her own that helped keep her loneliness at bay, she just couldn’t ignore the pleading, desperate cry.  It sounded like a feline in distress.

She had been out shooting pictures of the mountains when she had heard the ear piercing, plaintive sound that had prompted her to make her way in this direction.  It lead her to the boundaries of the residence of Logan Chandler.

She shivered even though the early summer day was warm.  She knew him.  Who didn’t know Logan Chandler, the young, billionaire owner of Chandler Corporation?  This was his vacation home.  As the towering, massive, two story brick home came into view she had to wonder what his main residence looked like when he had a vacation home that looked more like a resort than a residence.

Logan was her nearest neighbor and she had run into him during his visits to his vacation house.  He was an avid skier that visited often in the winter and she noticed that he seemed to be spending more and more time here in the summer. She met up with him fairly often during his visits...but always by accident.  They frequented some of the same hiking trails and it wasn’t unusual to run into him during his time here in the summer.  Even after changing her route several times, Holly still seemed to encounter Logan Chandler far more often than she would have desired.

It wasn’t that she was exactly avoiding him.  Well…okay…maybe she
was
going
slightly
out of her way to decrease the chances of meeting up with him.

Not that Logan Chandler needed fixing.  He was just too compelling...too handsome...too successful.  Oh hell...he was just too much of everything.

Maybe that’s why you refuse him.  He’s a guy who actually has his shit together.  That’s pretty frightening for a woman like you.

Ridiculous.  She wasn’t afraid of Logan…she just didn’t want to get involved, she tried to convince herself as she approached the tree containing the livid cat.

The crying feline was stuck in a tree.  It was a cottonwood that ran right next to the brick structure.

Holly sat back and evaluated the situation.  She would have to jump for the lowest branch and pull herself up.  The cat wasn't that high...but high enough.  She had on sturdy hiking boots, but her cut off jeans and tank top were hardly great protection against the branches.

She took her dark blonde ponytail and stuck it under her top in the back so that it wouldn't get snarled while she tried to wade through the dangerous route that she was mapping in her mind.

The black cat was young.  Not really a kitten, but not a mature cat either.  It looked down at her with a pathetic, helpless look as it continued to whine.

"All right, all right.   I'm on my way."  She sighed aloud as she jumped for the lower branch.

She was such a dupe.

Holly navigated the branches carefully, trying not to get herself scratched up during her rescue attempt.  She had to move carefully to find footholds  strong enough to support her.

Was she insane to make this risky climb?  The branches were flimsy and many of them were on a slanted curve downward that made slipping a rather distinct possibility.

Oh, well.  She had always been a sucker, she reminded herself as she plowed her way through another dense patch of heavy vines.  Her last boyfriend had drained her dry financially and she was still paying the bills for it.  She hadn't dated another man since and that had been two years ago.  She had been working on her co-dependent tendencies ever since. "You would think by the age of twenty-six you would have learned not to be a rescuer.  It's gotten you into nothing but trouble,"  she muttered to herself as she slid carefully to another branch, trying not to look down at how far she had already ascended.  She might survive the fall, but it would certainly break a few bones.

Holly wasn’t sure that her “rescuer” tendencies applied to cats. She was just being...humane.  She assured herself that it wasn't quite the same as picking a loser boyfriend that she was continually making excuses for and trying to save.

She finally reached a branch that would allow her to grab the wailing cat by the scruff of it's neck.  She stretched and her hand landed on the soft fur.

She was breathing a sigh of relief when the cat suddenly scrambled out of her hand and pranced gracefully down the branches of the tree, jumping nimbly to the ground.  It looked back at her with what she interpreted as a feline grin before scampering off on it's merry way.

"Shit!"  She cursed loudly as she tried to get her balance back.  Her feet had lost purchase on the solid branch beneath her and she slid to the end of the branches where she couldn't find a foot hold.  The branches were curved and light, making it impossible for her to plant her feet.  She grasped the branches over her head, knowing she was going to fall.  Her mind worked frantically to think of some way to lessen the severity while she clung to the branches above her.

Maybe she deserved to splatter to the ground below for attempting such a totally useless stunt…but she sure as hell didn’t want to.

Just as she was resigned to the fact that she was going to break every bone in her body, a window in the house swung open and Logan Chandler appeared.

It was a large window on the second story and he jumped up onto the ledge.   It was nearly even with her dangling body.  It didn't support his full height so he was hunched over, one arm above him inside of the house and the other coming toward her.  His reach was just inches short of her body.

"You have to swing toward me.  Don't let go."  His voice was deep and calm.

It wasn't as if she exactly wanted to let go and plunge to what would surely be her death…or at least an enormous amount of pain, but she wasn't exactly spider-woman.  She kept a death grip on the branches above as she tried to swing her legs toward him.

Just as her hands were about to slip and let go...he caught her.  He grabbed the waist of her jean shorts and yanked…hard.  He caught her as she slammed into his body,  the momentum taking them both flying through the window, hitting the plush carpet with a muffled thud.  She ended up sprawled on top of him in an awkward heap.

She was breathless and shaking.  "Oh God, Logan.  I'm sorry.  You could have been hurt.  Are you okay,"  Dumb question.  She had landed full force on top of him.  Of course he wasn’t okay.

She scrambled off of him, trying to see if he was injured.

His eyes were shooting fire as he rose to his feet, slightly winded from having a crazy woman fly through his window and crash down on top of him.

She stood up slowly, slightly dizzy and off balance, her adrenaline still kicking through her body.

She was still stunned by his very brave move.  He could have easily fallen with her.  He had pulled with just the right momentum to have them both fall back through the window.  He had also taken the brunt of the fall, her body cushioned by his larger, muscular frame.

She realized they were standing in what must be his bedroom.  He was dressed in a pair of jeans and...nothing else.  His hair was damp and she assumed he had just gotten out of the shower.

"Are you hurt?,"  his voice was curt as he ran his hands over her body.  He looked at her scraped hands with a frown.  "I'll get something for that."

He walked into a bathroom that was situated right off the master bedroom. He came back and opened a tube of what she assumed was antibiotic ointment.  He rubbed it into both of her palms with a gentle touch, even though he was still scowling.

They were minor scratches.  They didn't even hurt.  "I'm fine, Logan."

"You could have been killed, Holly.  What the hell were you thinking?"  He put the ointment on the bedside table and faced her.

He was furious, but even in anger he was the most handsome man she had ever seen.  His light blonde hair was still damp and he kept it in a casual, neat style that curled down to the nape of his neck.  Deep blue eyes that were flashing fire collided with her concerned, green-eyed gaze. Her face flaming with embarrassment, she surveyed the muscular body of a man that definitely didn't sit in an office chair every moment of the day.

Cinderella Wore Tennis Shoes: A Novella by Holly Jacobs
All of You by Christina Lee
Blood Music by Jessie Prichard Hunter
The Graves of Plague Canyon (The Downwinders Book 3) by Michael Richan
Keep Me Safe by Breson, Elaine
Twin Flames by Elizabeth Winters
The Key by Pauline Baird Jones
The Last Wish by Sapkowski, Andrzej
Packing For Mars by Roach, Mary
Confieso que he vivido by Pablo Neruda
Our partner