Read The Power of Silence Online

The Power of Silence 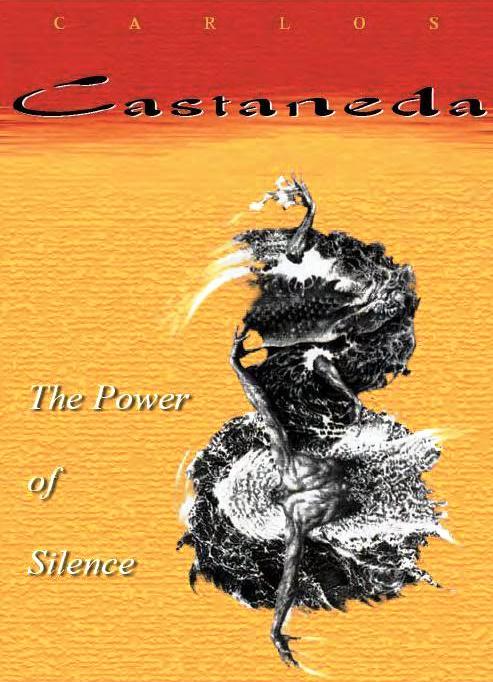 The Power of Silence

Eighth
book in the series.

1. - The Manifestations Of The Spirit: The First Abstract
Core

2. - The Impeccability Of The Nagual Elias

3. - The Knock Of The Spirit: The Abstract

4. - The Last Seduction Of Nagual Julian

5. - The Trickery Of The Spirit: Dusting The Link With
The Spirit

6. - The Four Moods Of Stalking

7. - The Descent Of The Spirit: Seeing The Spirit

8. - The Somersault Of Thought

My books
are a true account of a teaching method that don Juan Matus, a Mexican Indian
sorcerer, used in order to help me understand the sorcerers' world. In this
sense, my books are the account of an on-going process which becomes more clear
to me as time goes by.

It takes
years of training to teach us to deal intelligently with the world of everyday
life. Our schooling - whether in plain reasoning or formal topics - is
rigorous, because the knowledge we are trying to impart is very complex. The
same criteria apply to the sorcerers' world: their schooling, which relies on
oral instruction and the manipulation of awareness, although different from
ours, is just as rigorous, because their knowledge is as, or perhaps more,
complex.

At various
times don Juan attempted to name his knowledge for my benefit. He felt that the
most appropriate name was nagualism, but that the term was too obscure. Calling
it simply "knowledge" made it too vague, and to call it
"witchcraft" was debasing. "The mastery of intent" was too
abstract, and "the search for total freedom" too long and
metaphorical. Finally, because he was unable to find a more appropriate name,
he called it "sorcery," although he admitted it was not really
accurate.

Over the
years, he had given me different definitions of sorcery, but he had always
maintained that definitions change as knowledge increases. Toward the end of my
apprenticeship, I felt I was in a position to appreciate a clearer definition,
so I asked him once more.

He stopped
for a moment before he continued. "Human beings are born with a finite
amount of energy," don Juan said, "an energy that is systematically
deployed, beginning at the moment of birth, in order that it may be used most
advantageously by the modality of the time."

"What
do you mean by the modality of the time?" I asked.

He urged me
with a subtle movement of his eyebrows to consider all this.

"This
is what I mean when I say that the average man lacks the energy needed to deal
with sorcery," he went on. "If he uses only the energy he has, he
can't perceive the worlds sorcerers do. To perceive them, sorcerers need to use
a cluster of energy fields not ordinarily used. Naturally, if the average man
is to perceive those worlds and understand sorcerers' perception he must use
the same cluster they have used. And this is just not possible, because all his
energy is already deployed."

He paused
as if searching for the appropriate words to make his point.

"Think
of it this way," he proceeded. "It isn't that as time goes by you're
learning sorcery; rather, what you're learning is to save energy. And this
energy will enable you to handle some of the energy fields which are
inaccessible to you now. And that is sorcery: the ability to use energy fields
that are not employed in perceiving the ordinary world we know. Sorcery is a
state of awareness. Sorcery is the ability to perceive something which ordinary
perception cannot.

"Everything
I've put you through," don Juan went on, "each of the things I've shown
you was only a device to convince you that there's more to us than meets the
eye.

We don't
need anyone to teach us sorcery, because there is really nothing to learn. What
we need is a teacher to convince us that there is incalculable power at our
fingertips. What a strange paradox! Every warrior on the path of knowledge
thinks, at one time or another, that he's learning sorcery, but all he's doing
is allowing himself to be convinced of the power hidden in his being, and that
he can reach it."

"Is
that what you're doing, don Juan - convincing me?"

"Exactly.
I'm trying to convince you that you can reach that power. I went through the
same thing. And I was as hard to convince as you are."

"Once
we have reached it, what exactly do we do with it, don Juan?"

"Nothing.
Once we have reached it, it will, by itself, make use of energy fields which
are available to us but inaccessible. And that, as I have said, is sorcery. We
begin then to see - that is, to perceive - something else; not as imagination,
but as real and concrete. And then we begin to know without having to use
words. And what any of us does with that increased perception, with that silent
knowledge, depends on our own temperament."

On another
occasion, he gave me another kind of explanation. We were discussing an
unrelated topic when he abruptly changed the subject and began to tell me a
joke. He laughed and, very gently, patted my back between the shoulder blades,
as if he were shy and it was too forward of him to touch me. He chuckled at my
nervous reaction.

"You're
skittish," he said teasingly, and slapped my back with greater force.

My ears
buzzed. For an instant I lost my breath. It felt as though he had hurt my
lungs. Every breath brought me great discomfort. Yet, after I had coughed and
choked a few times, my nasal passages opened and I found myself taking deep,
soothing breaths. I had such a feeling of wellbeing that I was not even
annoyed at him for his blow, which had been hard as well as unexpected.

Then don
Juan began a most remarkable explanation. Clearly and concisely, he gave me a
different and more precise definition of sorcery.

I had
entered into a wondrous state of awareness! I had such clarity of mind that I
was able to comprehend and assimilate everything don Juan was saying. He said
that in the universe there is an unmeasurable, indescribable force which
sorcerers call intent, and that absolutely everything that exists in the entire
cosmos is attached to intent by a connecting link. Sorcerers, or warriors, as
he called them, were concerned with discussing, understanding, and employing
that connecting link. They were especially concerned with cleaning it of the
numbing effects brought about by the ordinary concerns of their everyday lives.
Sorcery at this level could be defined as the procedure of cleaning one's
connecting link to intent. Don Juan stressed that this "cleaning
procedure" was extremely difficult to understand, or to learn to perform.
Sorcerers, therefore, divided their instruction into two categories. One was instruction
for the everyday-life state of awareness, in which the cleaning process was
presented in a disguised fashion. The other was instruction for the states of
heightened awareness, such as the one I was presently experiencing, in which
sorcerers obtained knowledge directly from intent, without the distracting
intervention of spoken language.

Don Juan
explained that by using heightened awareness over thousands of years of painful
struggle, sorcerers had gained specific insights into intent; and that they had
passed these nuggets of direct knowledge on from generation to generation to
the present. He said that the task of sorcery is to take this seemingly
incomprehensible knowledge and make it understandable by the standards of
awareness of everyday life.

Then he explained
the role of the guide in the lives of sorcerers. He said that a guide is called
"the nagual," and that the nagual is a man or a woman with
extraordinary energy, a teacher who has sobriety, endurance, stability; someone
seers
see
as a
luminous sphere having four compartments, as if four luminous balls have been
compressed together. Because of their extraordinary energy, naguals are
intermediaries. Their energy allows them to channel peace, harmony, laughter,
and knowledge directly from the source, from intent, and transmit them to their
companions. Naguals are responsible for supplying what sorcerers call "the
minimal chance": the awareness of one's connection with intent.

I told him
that my mind was grasping everything he was telling me, that the only part of
his explanation still unclear to me was why two sets of teachings were needed.
I could understand everything he was saying about his world easily, and yet he
had described the process of understanding as very difficult.

"You
will need a lifetime to remember the insights you've had today," he said,
"because most of them were silent knowledge. A few moments from now you
will have forgotten them. That's one of the unfathomable mysteries of
awareness."

Don Juan
then made me shift levels of consciousness by striking me on my left side, at
the edge of my ribcage.

Instantly I
lost my extraordinary clarity of mind and could not remember having ever had
it.

Don Juan
himself set me the task of writing about the premises of sorcery. Once, very
casually in the early stages of my apprenticeship, he suggested that I write a
book in order to make use of the notes I had always taken. I had accumulated
reams of notes and never considered what to do with them. I argued that the
suggestion was absurd because I was not a writer.

"Of
course, you're not a writer," he said, "so you will have to use
sorcery. First, you must visualize your experiences as if you were reliving
them, and then you must see the text in your
dreaming
. For you, writing should not be a
literary exercise, but rather an exercise in sorcery."

I have
written in that manner about the premises of sorcery just as don Juan explained
them to me, within the context of his teaching.

These two categories
allowed teachers to school their apprentices toward three areas of expertise:
the mastery of awareness, the art of stalking, and the mastery of intent.

These three
areas of expertise are the three riddles sorcerers encounter in their search
for knowledge.

The mastery
of awareness is the riddle of the mind; the perplexity sorcerers experience
when they recognize the astounding mystery and scope of awareness and
perception.

The art of
stalking is the riddle of the heart; the puzzlement sorcerers feel upon
becoming aware of two things: first that the world appears to us to be
unalterably objective and factual, because of peculiarities of our awareness
and perception; second, that if different peculiarities of perception come into
play, the very things about the world that seem so unalterably objective and
factual change. The mastery of intent is the riddle of the spirit, or the
paradox of the abstract - sorcerers' thoughts and actions projected beyond our
human condition.

The Thrifty Cookbook: 476 Ways to Eat Well With Leftovers by Kate Colquhoun
Counterfeit World by Daniel F. Galouye
Ex-Factor (Diamond Girls) by Dane, Elisa
Celtic Rain (The Battle Raven Series) by Isabelle Stewart
The Once and Future Spy by Robert Littell
An Arsonist's Guide to Writers' Homes in New England by Brock Clarke
Thendara House by Marion Zimmer Bradley
Plus None 2 by Emily Hemmer
Siege At The Settlements (Book 6) by Craig Halloran
La forma del agua by Andrea Camilleri
Our partner