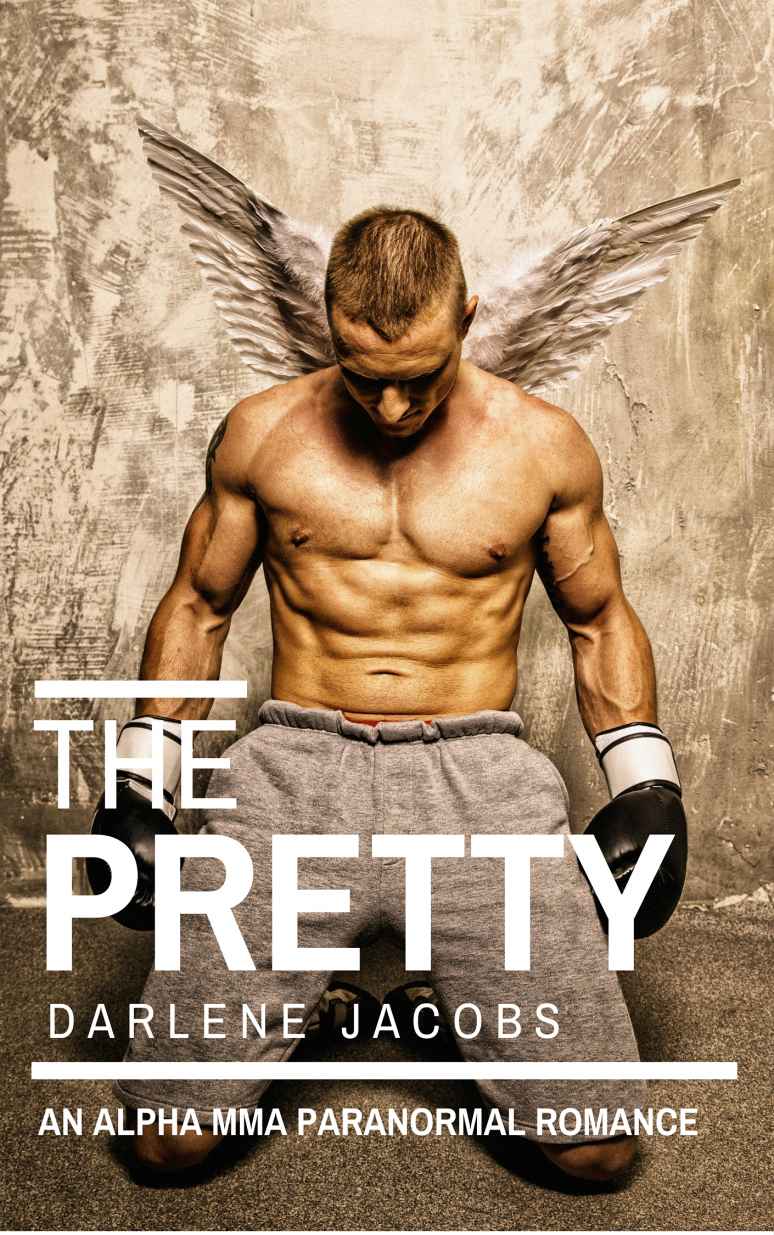 A
light-heavyweight
MMA fighter known for his crippling blows in the ring, Roman got his nickname, The Pretty, for dominating the ring without a scratch to his face.

R
oman has
a following of men who want to bask in his presence, and women who only want a piece of The Pretty...

T
hat is until secretive
, curvy-sensation, Tuesday came along. An Ivy Leaguer who has taken over the gym management after her uncle's passing.
Her tastes are platinum, standards high, her secrets, many.

T
he Pretty assumes
Tuesday will be just another easy lay. He thought wrong. This one is a 'tough to impress' bitch, and that makes him want her even more.

B
ut what happens
next defies the laws of the universe and the of love and lust.

T
his is
Book 1 of a 3 Part Series. Mature Audience.

I
f you enjoy this story
, why not continue the series with
THE BROKEN
?

W
hile you’re at it
, feel free to review this book on
Amazon
and join
Darlene’s mailing list
where you’ll be first to know about free books, ARCs and more.

S
ometimes you fight
your entire life seeking that perfect love. But once you get it, it’s taken away as quietly as it came.

T
he fighters step
out of their corners for this third and final UFC light heavyweight championship title round.

T
he Pretty is looking
every bit the champion he is. At two hundred and four pounds, his solid physique is imposing to anyone who crosses his path; if they admit it.

T
he Pretty is also
tattoo-free as he refuses to cover any inch of his well-chiseled physique with anything other than a woman.

T
he bout is
one of ten on the card tonight. The Pretty is up by four points at fifty-six. He has scored perfect tens from all three judges in the past two rounds.

H
owever
, the Referee deducts points in the prior two rounds for what he calls holding and fish hooking. Total bullshit in the opinions of the crowd of thousands who shout profanities at the Referee to rattle him.

T
he Pretty’s opponent
, Lucky Lewis, catches a few “lucky breaks.” Bookies give him 100 to 1 odds that he would make it to the third and final round against, The Pretty.

L
ucky barely ranks
as the number five player and fell into this championship bout with some assistance from an unscrupulous source. This corrupt source also has deep pockets and influence inside and outside the ring.

T
he original fighter
, The Dragon, was the one to beat. However, with his recent injuries, doctors have ordered him not to compete in this title bout. The injuries left Lucky Lewis to slide into his spot.

B
ut the odds
-makers may lose big time as they lack insider information that will cost them. Lucky misses three swings as The Pretty’s lightning quick agility saves him from impact.

H
owever
, Lucky pretends to slip as The Pretty takes advantage of the fall and lands on top of him with a body slam. The Pretty wraps his body around Lucky as he uses a Roman Gecko signature move of his and slides Lucky over to the fence once again. However, Lucky twists out and conceals a rabbit punch to the base of The Pretty’s skull.

T
he Referee
apparently doesn’t see the banned technique that should have disqualified Lucky, so he allows the fight to continue.

A
blow
like this can typically knock a player out, and possibly send them to an early grave. But The Pretty manages to rise to his feet.

T
uesday is
use to brutal fights between men in cages and knows The Pretty can handle himself, but this is different. She recognizes the illegal blow and jumps from her seat and charges towards the ringside Doctor. Unfortunately, she is stopped by Security.

“
D
idn’t you see that
?” Tuesday responds in a hyper state of agitation.

T
he Security Officer
shakes his head and blocks her from going any farther.

F
rom The Pretty’s corner
, Al sees the illegal blow and gestures to The Pretty as to what to do. However, Roman waves him off as per The Pretty’s demands.

T
he Pretty refuses
to allow a single punch to take him down, even if it’s an illegal one.

O
fficials
, the Cornerman, everyone running the bout say The Pretty just looks tired but Tuesday knows otherwise. They all miss crucial moments where they should intervene to help, The Pretty.

T
he second sign
of trouble comes towards the middle of this final round. The Pretty slightly staggers after he lands a Muay Thai short-range strike.

T
uesday recognizes
his stagger as a gait disturbance, evidence of his changing condition. Why haven’t the referee or officials, or the coaches stopped the bout, Tuesday wonders?

T
he Pretty takes
a jab and a leg kick from Lucky. The Referee reprimands Lucky for an illegal groin kick. Lucky’s back faces The Pretty as he stumbles. He doesn’t have his feet under him at this point.

A
nyone who has been
around UFC and seen a handful of games knows this is not exhaustion but a lack of coordination. Unfortunately, this is the first indication of a deteriorating fighter.

A
s the fight progresses
, The Pretty’s feet cross, which puts him in a vulnerable position.

T
he ringside Doctor
glances up at The Pretty and Lucky and ignores all the warning signals before he returns to texting. He takes his eyes completely off the fighters at a time when he should monitor them closely.

T
he Pretty is
on the ropes as Lucky lands an uppercut. The Referee steps in and asks The Pretty if he wants to continue.

“
H
ell yeah
,” The Pretty manages as he staggers back to his feet and into the center of the ring to confront Lucky.

F
rom the sidelines
, Tuesday shouts to the Referee, “Do a standing eight count.” However, her words are ignored. Or perhaps they are drowned out by the crowd.

T
uesday pushes
her way towards the three judges before Security notices. Tuesday grabs the shoulder a Judge and asks, “Why in the hell is the Referee even in the ring if he’s not going to protect the safety of the fighters? You saw that illegal blow, why are you letting this continue?”

T
he Judge gestures
for Security to take her away.

T
he bell sounds
as both fighters return to their corners. The Pretty grabs hold of the cage to steady himself but is unsuccessful. He loses his balance as Al catches him.

T
he ringside Doctor again
, glances into both corners, then returns to texting on his cell phone.

A
l holds
up The Pretty by his neck and shoulders as the Timekeeper taps the Doctor on his shoulder to get his attention.

S
omethings not right
. Roman catches a glimpse of Tuesday before he collapses.

The Perfect Witness by Iris Johansen
Boar Island by Nevada Barr
Affair with an Alien by Jennifer Scocum
Rogue Angel 52: Death Mask by Alex Archer
Dirty Work: A Bad Boy Romance by Sophie Brooks
The Carnelian Throne by Janet Morris
Torpedo Run (1981) by Reeman, Douglas
Give In To Me by Lacey Alexander
The Evening News by Arthur Hailey
Knee Deep by Jolene Perry
Our partner