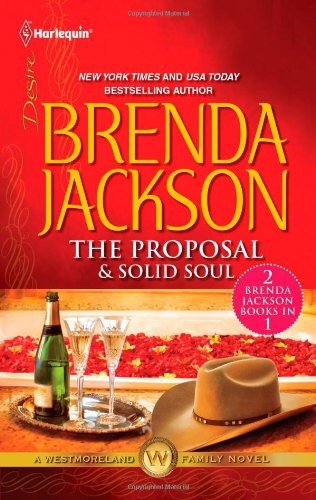 For your enjoyment,
we’ve added in this volume
Solid Soul,
a classic book by Brenda Jackson!

“Brenda Jackson writes romance that sizzles
and characters you fall in love with.”

“Jackson’s trademark ability to weave
multiple characters and side stories together
makes shocking truths all the more exciting.”

“Jackson’s characters are wonderful, strong,
colorful and hot enough to burn the pages.”

“The kind of sizzling, heart-tugging story
Brenda Jackson is famous for.”

“This is entertainment at its best.”

—
RT Book Reviews
on
Star of His Heart

is a die “heart” romantic who married her childhood sweetheart and still proudly wears the “going steady” ring he gave her when she was fifteen. Because she’s always believed in the power of love, Brenda’s stories always have happy endings. In her real-life love story, Brenda and her husband of thirty-eight years live in Jacksonville, Florida, and have two sons.

A
New York Times
bestselling author of more than seventy-five romance titles, Brenda is a recent retiree who now divides her time between family, writing and traveling with Gerald. You may write Brenda at P.O. Box 28267, Jacksonville, Florida 32226, by email at [email protected] or visit her website at www.brendajackson.net.

This is it!
The Proposal
is the twentieth book in The Westmorelands series and the fifth book about those Denver Westmorelands. For those two reasons alone I knew this story was special from the moment I began writing it.

I love writing about family, and I’m pleased to announce that also included in this book is the first book of my Steele Family series, Chance Steele’s story. Including this story is our way to introduce you to another one of my families of strong, too-good-to-be-true, irresistible and handsome men.

In
Solid Soul,
a single mother and a single father get caught in a web that is woven just for them by their matchmaking offspring. This is definitely my version of
The Parent Trap.

Sit back and enjoy both Jason Westmoreland and Chance Steele’s stories. And with every Brenda Jackson book, it is suggested you have a cold drink ready. These stories are hot!

To Gerald Jackson, Sr. My one and only.

To all my readers who enjoy reading about the
Westmorelands, this book is especially for you!

To my Heavenly Father. How Great Thou Art.
He hath made everything beautiful in his time.

“H
ELLO, MA’AM,
I’
M
J
ASON
Westmoreland and I’d like to welcome you to Denver.”

Even before she turned around, the deep, male voice had Bella Bostwick’s stomach clenching as the throaty sound vibrated across her skin. And then when she gazed up into his eyes she had to practically force oxygen into her lungs. He had to be the most gorgeous man she’d ever seen.

For a moment she couldn’t speak nor was she able to control her gaze from roaming over him and appreciating everything she saw. He was tall, way over six feet, with dark brown eyes, sculpted cheekbones and a chiseled jaw. And then there was his skin, a deep, rich chocolate-brown that had her remembering her craving for that particular treat and how delicious it was. But nothing could be more appealing than his lips and the way they were shaped. Sensuous. Sumptuous. A perfect pair for the sexy smile curving them.

He said he was a Westmoreland and because this charity ball was given on behalf of the Westmoreland Foundation, she could only assume he was one of
those
Westmorelands.

She took the hand he’d extended and wished she hadn’t when a heated sizzle rode up her spine the moment she touched it. She tried forcing the sensation
away. “And I’m Elizabeth Bostwick, but I prefer just Bella.”

The smile curving his lips widened a fraction, enough to send warm blood rushing through her veins. “Hi, Bella.”

The way he pronounced her name was ultrasexy. She thought his smile was intoxicating and definitely contagious, which was the reason she could so easily return it. “Hi, Jason.”

“First, I’d like to offer my condolences on the loss of your grandfather.”

“And then I’m hoping the two of us could talk about the ranch you inherited. If you decide to sell it, I’d like to put in my bid for both the ranch and Hercules.”

Bella drew in a deep breath. Her grandfather Herman Bostwick had died last month and left his land and prized stallion to her. She had seen the horse when she’d come to town for the reading of the will and would admit he was beautiful. She had returned to Denver from Savannah only yesterday to handle more legal matters regarding her grandfather’s estate. “I haven’t decided what I plan on doing regarding the ranch or the livestock, but if I do decide to sell I will keep your interest in mind. But I need to make you aware that according to my uncle Kenneth there are others who’ve expressed the same interest.”

He had barely finished his sentence when her uncle suddenly appeared at her side and spoke up. “Westmoreland.”

Bella immediately picked up strong negative under
currents radiating between the two men and the extent of it became rather obvious when her uncle said in a curt tone, “It’s time to leave, Bella.”

She blinked. “Leave? But we just got here, Uncle Kenneth.”

Her uncle smiled down at her as he tucked her arm underneath his. “Yes, dear, but you just arrived in town yesterday and have been quite busy since you’ve gotten here taking care of business matters.”

She arched a brow as she stared at the great-uncle she only discovered she had a few weeks ago. He hadn’t been concerned with how exhausted she was when he’d insisted she accompany him here tonight, saying it was her place to attend this gala in her grandfather’s stead.

She barely had time to bid Jason farewell when her uncle escorted her to the door. As they proceeded toward the exit she couldn’t help glancing over her shoulder to meet Jason’s gaze. It was intense and she could tell he hadn’t appreciated her uncle’s abruptness. And then she saw a smile touch his lips again and she couldn’t help reciprocate by smiling back. Was he flirting with her? Was she with him?

“Jason Westmoreland is someone you don’t want to get to know, Bella,” Kenneth Bostwick said in a gruff tone, apparently noticing the flirtatious exchange between them.

She turned to glance up at her uncle as they walked out into the night. People were still arriving. “Why?”

“He wants Herman’s land. None of the Westmorelands are worth knowing. They think they can do whatever the hell they please around these parts.” He interrupted
her thoughts by saying, “There’re a bunch of them and they own a lot of land on the outskirts of town.”

She lifted an arched brow. “Near where my grandfather lived?”

“Yes. In fact, Jason Westmoreland’s land is adjacent to Herman’s.”

“Really?” She smiled warmly at the thought that Jason Westmoreland lived on property that connected to the land she’d inherited. Technically that made her his neighbor.
No wonder he wants to buy my land,
she thought to herself.

“It’s a good thing you’re selling Herman’s land, but I wouldn’t sell it to him under any circumstances.”

She frowned when he opened the car for her to get in. “I haven’t decided what I plan to do with the ranch, Uncle Kenneth,” she reminded him.

He chuckled. “What is there to decide? You know nothing about ranching and a woman of your delicacy, breeding and refinement belongs back in Savannah and not here in Denver trying to run a hundred-acre ranch and enduring harsh winters. Like I told you earlier, I already know someone who wants to buy the ranch along with all the livestock—especially that stallion Hercules. They’re offering a lot of money. Just think of all the shoes, dresses and hats you’ll be able to buy, not to mention a real nice place near the Atlantic Ocean.”

Bella didn’t say anything. She figured this was probably not the time to tell him that as far as she was concerned there was a lot to decide because none of those things he’d mentioned meant anything to her. She refused to make a decision about her inheritance too hastily.

As her uncle’s car pulled out of the parking lot,
she settled back against the plush leather seats and remembered the exact moment her and Jason Westmoreland’s eyes had met.

It was a connection she doubted she would ever forget.