Read The Return of Santiago: A Myth of the Far Future Online

The Return of Santiago: A Myth of the Far Future 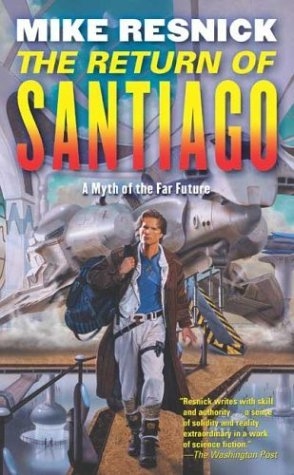 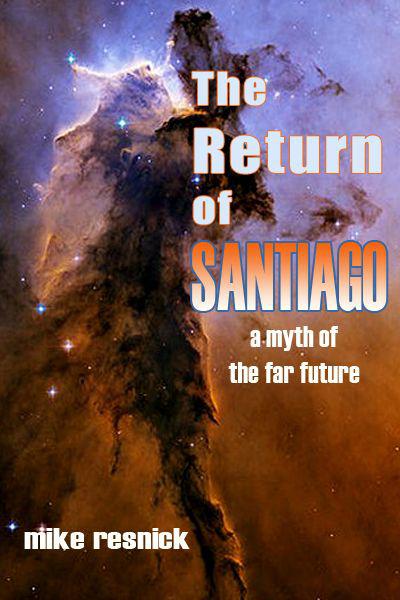 THE RETURN OF SANTIAGO:

A Myth of the Far Future

Some people say he was killed by the Angel. Others say that Johnny One-Note gunned him down. Most think he died at the hands of Peacemaker MacDougal.

Nobody knows exactly when he met his fate, or where. It just slowly began dawning on his enemies—he didn't have any friends, not that anyone knew about—that he hadn't made any trouble for some time.

Now, that doesn't mean men weren't still killed and banks weren't still robbed and mining worlds weren't still plundered. After all, Santiago wasn't the only outlaw on the Inner Frontier; he was just the biggest—so big, some say, that his shadow blotted out the sun for miles around.

Long after the Angel and Johnny One-Note and Peacemaker MacDougal had all gone to their graves, men and women—and aliens—were still arguing about Santiago. Some held that he was just a man, a lot smarter and more ruthless than most, but a man nonetheless. Others said that he was a mutant possessed of extraordinary powers, or else how could he have held the Navy at bay for so many years? There were even a few who thought he was an alien, with undefined but awesome alien abilities.

There was no known holograph of him, no retinagram or fingerprint anywhere in the Democracy. There were a few eyewitness accounts, but they differed so much from each other than no one took any of them seriously. A long-dead thief who called himself the Jolly Swagman swore he was eleven feet three inches tall, with orange hair and blazing red eyes that had seen the inner sanctum of hell itself. A preacher named Father William claimed he was an alien who always wore a face mask because oxygen was poison to his system. Virtue MacKenzie, who wrote three books about him, never described him, and the only holograph she took was of the S-shaped scar on the back of his right hand. According to one description he was a purple-skinned alien with four arms. Another had him a mechanized, gleaming metal cyborg, no longer capable of any human emotion.

There was even a school of thought that argued that there never was a Santiago, that he was a merely a myth—but there were too many graveyards on too many worlds to lend any credence to that belief.

They say that Black Orpheus, the poet and balladeer who wandered the spaceways, writing his endless epic of the larger- than-life heroes, villains, adventurers and misfits that he found there, spent half a dozen verses of his
Ballad of the Inner Frontier
describing Santiago in detail, but those verses were never codified and were lost to posterity.

The one thing everyone agreed upon was that the last time he had manifested his presence was in the year 3301 of the Galactic Era, and with the passing decades it was generally assumed that Santiago, whoever or whatever he may have been, was dead.

Which simply goes to show, as has been shown so many times in the past, that a majority of the people can be wrong.

For in 3407 G.E., 106 years after he vanished, Santiago returned to the Inner Frontier, to once again juggle worlds and secrets as in days of old, to bring death to his enemies, to stride across the planets in all his former glory.

This is his story. But to fully understand it, we must begin with Danny Briggs (who is not to remain Danny Briggs for long), a simple thief, physically unimpressive, artistically wanting, morally ambiguous, a young man of seemingly unexceptional gifts and abilities, and yet destined to play a central role in the return of Santiago . . .

Some say that he's a hundred,

Some say that he is more;

That was the last verse ever written by Black Orpheus, the Bard of the Inner Frontier. Though Santiago's name doesn't appear in it, it is generally considered to have been about the notorious King of the Outlaws.

And with that, Black Orpheus's history of the Frontier was done. Not finished in the sense that it was complete, but done. Shortly after writing those words he disappeared forever. Some say he found an idyllic world on which to live out his life. Others say that Santiago himself gunned him down. A handful believe that he found the task of codifying the entire history of the Inner Frontier in verse too daunting, and that he simply gave it up and went off to live out his years in solitude.

At the moment that he became a catalyst for history, Danny Briggs knew little of Santiago and even less of Black Orpheus. Like most kids he'd grown up thrilled by legends about both, but that was the extent of his knowledge and his interest. On the third night of the fifth month of the year 3407 of the Galactic Era, Danny Briggs had other things on his mind as he scaled the end of a long, low building, a cloth bag slung over his right shoulder.

He moved slowly, carefully, trying not to make a sound—but then the wind shifted, carrying his scent to the creatures below, and all his precautions were for nothing. A huge Moondevil, 200 pounds of muscle and sinew, saw him creeping across the roof and began howling. A Polarcat, glistening white in the moonlight, leaped up from its own enclosure and tried to dig its claws into Danny's leg.

As the young man sidestepped the Polarcat, two more animals of a type he'd never seen before launched themselves toward him, falling back as they hit the edge of the gently-pitched roof.

Danny cursed under his breath. There was no sense moving cautiously any longer. The only way to shut all the animals up was to get out of their sight as quickly as possible. He raced the length of the roof, ignoring the increasing din, and finally jumped down to a small atrium. He adjusted his pocket computer to set up a signal that disrupted the security cameras, found the door he was looking for, used the code he had stolen months earlier, and entered the office.

He considered killing the security system and just walking out the front door, but that would have given away the fact that he'd been there, and all his efforts would be wasted if the police suspected that anyone had invaded this particular office—especially when they discovered that no money had been taken.

Instead he went back the way he'd come. The animals were silent now, but he knew they wouldn't stay that way for long. Choosing speed over stealth, he climbed onto the roof of the long low building again, raced the length of it in the face of the ever-increasing howls, growls, and screams. When he came to the Moondevil, he reached into his leather bag, withdrew a small dead animal, and tossed it into the Moondevil's enclosure. Now if enough neighbors reported all the noise and the police investigated, they'd find the remains of the animal and assume that it had somehow wandered into the kennel and caused all the commotion.

An hour later he was sitting at his usual table at the Golden Fleece, a tavern on the outskirts of New Punjab, a small city that had nothing in common with the original Punjab except the subjugation of its natives, in this case the orange-skinned humanoids of Bailiwick. The world wasn't a very large or very important one: it held no fissionable materials, few precious stones or metals, and the farmland wasn't among the best. But it did have two million natives—it had had close to five million before the Navy pacified them—and three human cities, of which New Punjab, with almost 40,000 residents, was the largest.

It was said that Black Orpheus had once spent a night on Bailiwick, but there were no holographs or other records to prove it. Bailiwick's main claim to fame was Milos Jannis, who had been born there and was now the Democracy's middleweight freehand champion. Two minor actors and a second-rate novelist were the only other things Bailiwick had to brag about.

Danny Briggs didn't want to add to that total. He was content to remain relatively unknown and unapprehended. He shunned publicity the way bad politicians seek it out. Even when he turned a profit at what he considered to be his business, he always made sure to deposit and spend it offworld.

He ordered a drink and sat there, staring at himself in the mirror behind the bar. He wasn't thrilled with what he saw: a few inches under six feet in an era when the average man stood two inches above six feet. He was thin; not emaciated, but somewhere between slender and wiry. His head was covered by nondescript brown hair. He didn't like his chin much; too pointy. For the hundredth time he considered growing a beard to cover it, but his mustache was so sparse he hated to think of what a beard would look like. His ears stuck out too far; he figured one of these days he was going to lose one or both in a fight.

No, on the whole, there wasn't much about Danny Briggs that he liked. Hell, he didn't even like the way he made his living. He didn't believe in God, so he didn't believe that God had some nobler purpose for him. He had no fire burning in his belly, but rather a certain unfocused dissatisfaction, a desire to make some kind of mark, to scratch his name on the boulder of Time so people would know he'd been here. Not that he was a hero, because he wasn't; not because he would someday make a difference to the handful of misfits and criminals that formed his circle of friends, because he knew he was incapable of making one; but simply to show those who came after him that once upon a time there was a man named Danny Briggs, and he had lived right here on Bailiwick, and that, just once, he'd done something worth remembering.

Except that everything he'd done up to now was aimed at letting no one know he'd been here, and far from remembering him, he wanted nothing more than for the police and the Democracy to completely ignore his existence.

Interesting conflict, he thought wryly. The urge to be known versus the need to be hidden. Perhaps someday he'd resolve it, though he doubted it.

A grizzled, white-haired man with a noticeable limp entered the Golden Fleece, looked around, and walked directly to Danny's table.

"Three hundred Maria Theresa dollars up front and twenty percent of whatever you make."

"It was two hundred fifty last time," grumbled the man.

"You sure you won't take Democracy credits?" asked the old man.

"I don't want anything to do with them," said Danny.
Besides,
he added mentally,
you start spending too many Democracy credits, you start attracting a little too much Democracy attention—but I guess you haven't figured that out, have you?

The Girl Who Wrote in Silk by Kelli Estes
Lord of a Thousand Nights by Madeline Hunter
The Uncomplaining Corpses by Brett Halliday
Stevie Lee by Tara Janzen
Bloodmagic (Blood Destiny 2) by Harper, Helen
The Retribution of Mara Dyer by Michelle Hodkin
Spellcrash by Kelly Mccullough
The Opposite of Invisible by Liz Gallagher
i 57926919a60851a7 by Unknown
RAGE (The Rage Series Book 2) by MJ Riley
Our partner