Read The Riddles of The Hobbit Online

The Riddles of The Hobbit 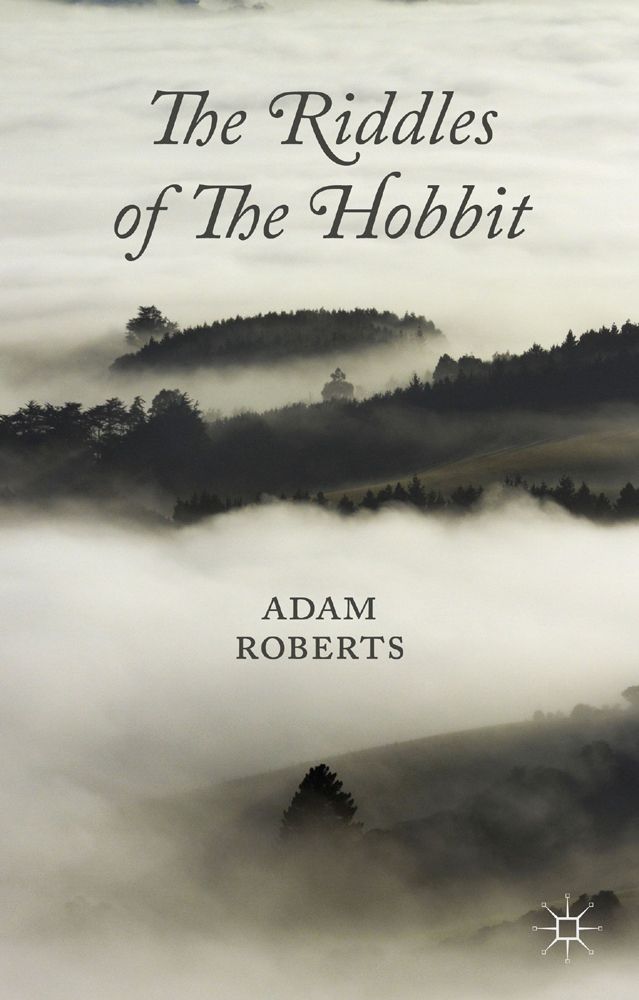 The
Riddles of
The Hobbit

THE HISTORY OF SCIENCE FICTION

The Riddles of
The Hobbit

All
rights reserved. No reproduction, copy or transmission of this publication may be made without written permission.

No portion of this publication may be reproduced, copied or transmitted save with written permission or in accordance with the provisions of the Copyright, Designs and Patents Act 1988, or under the terms of any licence permitting limited copying issued by the Copyright Licensing Agency, Saffron House, 6–10 Kirby Street, London EC1N 8TS.

Any person who does any unauthorized act in relation to this publication may be liable to criminal prosecution and civil claims for damages.

The author has asserted his right to be identified as the author of this work in accordance with the Copyright, Designs and Patents Act 1988.

Palgrave Macmillan in the UK is an imprint of Macmillan Publishers Limited, registered in England, company number 785998, of Houndmills, Basingstoke, Hampshire RG21 6XS.

Palgrave Macmillan is the global academic imprint of the above companies and has companies and representatives throughout the world.

Palgrave® and Macmillan® are registered trademarks in the United States, the United Kingdom, Europe and other countries.

This book is printed on paper suitable for recycling and made from fully managed and sustained forest sources. Logging, pulping and manufacturing processes are expected to conform to the environmental regulations of the country of origin.

A catalog record for this book is available from the Library of Congress.

2  Cynewulf and the
Exeter Book

3  Riddles in the Dark

4  The Riddles of the All-Wise

5  The Puzzle of the Two
Hobbits

6  The Riddle of Bilbo’s Pocket

7  The Riddle of the Ring

8
The Lord of the Rings
and the Riddle of Writing

9  The Volsung Riddle: Character in Tolkien

10  The Enigma of Genre Fantasy

4.1     Thor protects his daughter as he riddles a rather egg-like Alvíss: illustration by W. G. Collingwood (1908)

The
Hobbit
was after all not as simple as it seemed.

We call it a riddle because it rids us of something—and what it rids us of is precisely our investment in the four-square, straightforwardness of comprehension. The world is not simple.

Riddles have lost none of their power over us. There are many examples of this fact in our twenty-first century lives, from crossword and Sudoku puzzles, to children’s rhymes and Christmas cracker gags (and ‘when is a door not a door?’ is just as much a riddle as the door without hinges, key or lid)—indeed, these are just the tip of the iceberg. Some of the most popular modes of art today manifest the riddle as both form and rationale. Crime novels, for instance, very rarely describe crime as it actually occurs in the world—that is to say, crime writers very rarely construe their stories as either obvious, or else incomprehensible, which are the two main ways that crime actually presents itself (for social offences are either lamentably straightforward, or else unsolved, estranging and deracinating). There are good dramatic reasons for this, for stories that style crime as stupidly obvious or randomly baffling are unlikely to engage a large audience. Crime in the real world is about the disruption of order, but our appetite for story is a desire for closure and so that is what crime fiction provides us. To put it simply, crime fiction says: crime is a riddle. More, such fiction invariably
includes the solution to its riddle.
1
The classic puzzle-whodunit is one mode of this; a complex riddle in which we are given textual space and leisure (as the story unfolds) to ponder, before the surprising solution is revealed. So successful has this mode been it has spilled into other modes. A show like Fox Network’s
House
(2008’s globally most watched television show) tropes disease, and by extension health as a riddle to be solved. Sherlock Holmes, upon whom the ‘House’ character was based, continues to be prodigiously popular (an ongoing motion picture franchise and two big TV serials based upon a modern-day version of him)—and much of his appeal is that he treats everyday life as full of solvable riddles, riddles that other people do not even notice. A novel like Dan Brown’s
The Da Vinci Code
(2001) has even larger ambitions, for it styles not just murder but
religion
as a riddle, and presents us with a protagonist who is a professional riddle-solver. The phenomenal commercial success of this title can in part be explained by the way it leavens its narrative with a string of riddles for the reader to solve as she goes along. I can not pretend I have the highest opinion of Brown’s talents as a writer, but it seems to me that there is something more ambitious than simply crowd-pleasing in his novel: presenting for a mass audience not only religion as a riddle, but religion as a riddle
that can be solved
. Brown’s immense commercial success, quite apart from anything else, suggests common ground between cryptic crossword puzzles and the most profound religious mysteries of men and women, life and death. Brown’s talents as a writer are not able to match the grandeur of this connection, but some sense of it hangs about the creaky pulpisms of the novel and connected with enough readers to make it so colossal a bestseller.

Tolkien is another writer of quest narratives, and a man and an artist profoundly concerned with religious questions. This is one of the jumping-off points of this present study. Religious mysteries are, in a strict sense, riddles. That might look like a trivialising way of talking about faith, but I prefer to think of it the other way around—as a way of elevating the significance and dignity of riddles. Perhaps it would be better to say that even though they may seem trivial, riddles embody in a small way a very large observation about human existence. Life riddles us.

Saint Paul, in his letter to the Ephesians, puts it like this: ‘If ye have heard of the dispensation of the grace of God which is given
me to you-ward: how that by revelation he made known unto me the mystery; … which in other ages was not made known unto the sons of men, as it is now revealed unto his holy apostles and prophets by the Spirit’ (Ephesians, 3:2–5). In other words, Paul says: existence is a riddle of which the solution has been unknown, until now. The solution he proposes is, in a word, Christ. But this answer folds back on itself in that the answer to this riddle is itself a riddle, what Paul calls ‘the mystery of Christ’. Later in the letter Paul hopes that his readers ‘may be able to comprehend and to know the love of Christ, which passeth knowledge’ (Ephesians 3:18–19). That we can be assured of knowledge of something which passeth knowledge, and comprehension of the incomprehensible, speaks to the way the logic of the riddle goes deeper than simply ‘question plus answer’. This, I think, is why it is worthwhile to work, as it were,
upwards
from the simple riddle to the largest questions of God and the universe. Such a trajectory is, a Christian might note, the gradient of Christ’s own human incarnation as a gateway to the suprahuman divine. Besides, to come at it the other way around is to knock one’s head against the very enormousness of the enquiry. ‘There are certain questions’, Thomas Hardy once said, ‘which are made unimportant by their very magnitude. For example, the question whether we are moving in Space this way or that; the existence of God, etc.’
2
A very unHarydesque writer, Tolkien constructed his own art upon his faith, and therefore upon his belief that such questions are not only important but answerable, although the answers may be neither straightforward nor convenient.

Catholicism is one important context for Tolkien’s writing. Another, more obvious one, is the culture and art of northern Europe and Scandinavia during the first millennium. Tolkien immersed himself, professionally and creatively, in the culture of the Anglo-Saxon, Norse and Icelandic Dark Age peoples. He was a medievalist too, and a philologist, but when it came to writing his greatest novels he drew on the myths, literature and culture of an earlier period, the Dark Ages. In this first chapter I will go on to argue that riddles are a central feature of the Anglo-Saxon world. Tolkien certainly had a taste for them himself. The fact that he put a very high premium upon truth (as he certainly did) fed rather than denatured his fascination with ironic, riddling and unstraightforward talk.

Asked whether the riddles in
The Hobbit
were his own original compositions, or else versions of traditional Anglo-Saxon riddles,
Tolkien wrote to one correspondent strongly implying the former, and to another strongly implying the latter. That he could do both without mendacity is a function, I think, not of evasion but on the contrary of an active delight in riddling and misdirection—for to read both letters (they are discussed below, pp. 68–9) is amongst other things to see how precise Tolkien’s use of language was. His letters are full of ludic diversions, games, wit and puzzles, designed to divert and amuse his correspondents. Tom Shippey, the best critic to have devoted his attentions to Tolkien, records a letter he received from the man himself in 1970 responding to some of Shippey’s criticism.

I do turn back to the letter Professor Tolkien wrote to me on 13 April 1970, charmingly courteous and even flattering as it then was from one at the top of his profession to one at the bottom (‘I don’t like to fob people off with formal thanks … one of the nearest to my heart, or the nearest, of the many I have received … I am honoured to have received your attention’). And yet, and yet … What I should have realised—perhaps did half-realise, for I speak the dialect myself—was that this letter was written in the specialised politeness-language of Old Western Man, in which doubt and correction are in direct proportion to the obliquity of expression.
3