The Rise of the Fallen (The Angelic Wars Book 2) 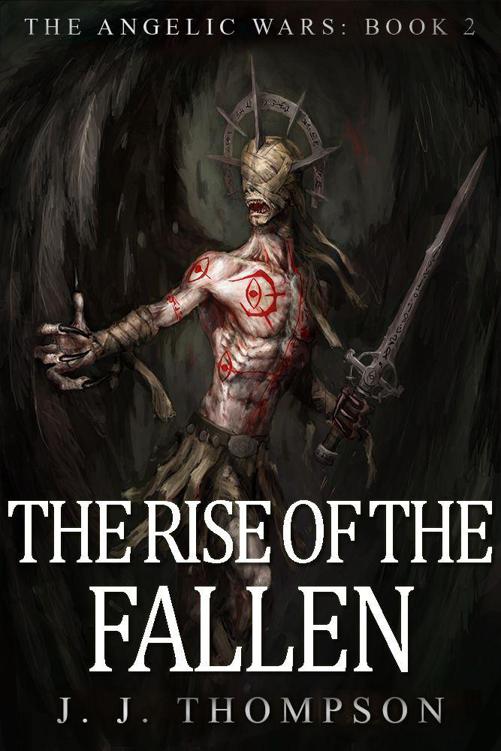 The
Rise of the Fallen

For
You, the Reader

The
Companion on my journey

Devastation. That's the only word that Chris could
think of as he stared out of the car window at the remains of the
Hawkes Nest.

The three rental cars slowly drove along the
narrow gravel road leading up to the mansion, and in the vehicles
were perhaps the only people left alive after the attack on their
headquarters.

Minutes earlier, as the cars had turned off of the
main highway, they'd been stopped by a police officer standing next
to her cruiser, guarding the entrance to the estate. Judge Hawkes had
shown her his identification and talked with her for a moment. She
had finally nodded and waved them through.

Chris had looked at the judge's sad expression.

“Yes, Christopher. Our delay in returning
allowed the fire to burn itself out and the coroner has already
cleared away the...the remains of our friends.” His voice had
broken for a moment and then he'd cleared his throat and continued.

“It's being ruled an accident. Apparently
the attackers took away any of their own casualties, as well as the
bodies of the guard dogs. There was no sign of Tyler and Jacob, so we
must assume that their bodies were removed as well.” He'd
sighed and stared blindly out at the passing forest that lined the
gravel drive.

Chris had sat quietly in shock. He'd been unable
to wrap his head around the idea that his two friends were dead. They
weren't much older than he was. He knew that Jacob had been fourteen
but wasn't sure about Ty. Fifteen maybe? He didn't know and that
small detail tormented him for some reason.

And the others. How many kids with angelic souls
had lived here? He had no idea. So many people came and went and he
had been so wrapped up in his own problems that he hadn't paid
attention. Damn it! He should have. These were people just like him.
They had names, faces, futures. And now he couldn't recall a single
one. No names came to mind. And of the adults, only Chef and Martin
had been what he would call friends: especially Chef.

“Your honor? How many were in the vault
under the house? Was Chef there?”

He'd realized that his voice sounded a bit shrill
and he had cleared his throat, trying to stay calm and sound more
mature.

The judge had answered without taking his eyes off
of the trees.

“I received a report from the police chief.
He and I are well acquainted and he generously provided what details
he could.”

Slowly, the man had reached into an inside pocket
and removed his cell. He'd looked down at it reluctantly and tapped
the screen a few times.

“Martin was identified. He had his wallet on
him. Three adult staff members were also found. Dental records are
being cross-referenced to identify their remains.” He had taken
a deep breath. “And nine of our kids.”

He'd looked up and met Chris' gaze. “Nine of
you. How they were able to stop nine angels, slaughter them like so
much cattle, is unknown. Even untrained, some of them should have
survived. But they did not. As for Chef, I don't know. He might be
one of the unidentified staffers. We'll have to wait for the
coroner's report.”

Nine of us, Chris had thought. Plus Ty and Jake.
Eleven teens with the souls of angels. Damn it all! How could this
happen? Someone should have survived. Who attacked them? A better
question might be
what
attacked them, he'd corrected himself.
What demonic Fallen angel was so powerful that it could destroy
eleven of us? And Chef.

Chris had turned his head away and looked out the
window as the judge was doing. He felt the tears threatening but
refused to let them flow. But inside was another matter. Ah, Chef.
Always there, big, loud, happy. Loving. Yes, a loving man. Gone now
because of those bastards.

And suddenly a cold frisson had stabbed through
Chris' guts. Talon. It all came back to Talon. It had to be them.
They had sheltered Lilith, tracked down Chris in the first place,
tried to capture others like him. They were local. Yes, it had to be
Talon.

His hands had felt painful for some reason and
he'd looked down at them and realized that they were clenched so
tightly that his fingernails were digging into his palms. He had
taken a long, deep breath and deliberately relaxed his fingers.

And now they were crossing the lawn and could see
the Nest for themselves. In the middle of the green field, the judge
asked the driver to stop and he got out. Chris scrambled to exit as
well. The staff members from the other cars joined them.

Natalie walked over and stood by him. When she
laid a hand on his shoulder, Chris looked at her. She was staring at
the gutted remains of the mansion. Her expression was stricken.

“So fast,” she whispered. “It
happened so fast.”

Judge Hawkes walked ahead, staring first at the
ground and then at the sky, before focusing on the mansion itself.

Chris wondered what he was thinking. Was he
playing memories through his head? The man had been raised here. Many
of his ancestors had too. Maybe he was thinking of happy, childhood
days. Days when the future was a far hill on the horizon and there
were only the carefree days of now. Or maybe he was thinking of
Martin. Martin, who was, Chris believed, the judge's best friend. He
simply didn't know.

He followed the judge slowly, staying several
respectful paces behind him.

Natalie walked in step with him. Her face was
blank now as she too struggled with her own memories.

As for Chris, he hadn't been at the Nest long
enough to consider it home, but it had been getting there. With no
family of his own, the staff and teens living at the mansion had
begun to fill in a void he didn't even know was there. And
now...what? What could they do? What should they do? He was lost at
sea and the street kid that he had been was reasserting himself,
looking at options, checking out escape routes. The tenuous ties to
the judge and the others were already slipping away.

They reached the broken gates leading into the
courtyard of the Nest. The judge reached out and touched one of them
gently. The metal had been twisted and warped by some sort of intense
heat and both gates were barely hanging on by a bottom hinge.

“What could do that, sir?” Natalie
asked in a hushed voice.

The judge pushed on the sagging gate and it moved
inward with a shuddering squeal. He looked back at Natalie and Chris.

“If you'd prefer to wait out here, I
understand. But I want to take a look inside for myself.”

“I'll go with you, judge,” Natalie
said at once. She glanced at Chris who nodded reluctantly.

“Very well. Watch your step. The floors have
undoubtedly been weakened by the fire.”

They followed him across the yard. The ground had
been churned up by the many fire trucks and emergency vehicles that
must have responded to the blaze and the neat gravel driveway had
turned into a mass of wheel ruts and potholes. Chris heard the judge
sigh softly.

When they had reached the front doors, now just a
few pieces of wood hanging forlornly on their hinges, the judge
looked back at the rest of the party and motioned for them to remain
outside. Then he looked at the two teens intently and turned and
entered the mansion.

The front hallway was a mess. The rug was torn and
water-soaked. The desk near the door had been overturned and the
computer that had rested on top of it was smashed and broken on the
floor.

“Did the attackers do this?” Natalie
asked quietly.

“No, I suspect that the damage was caused by
the firefighters,” the judge answered as he walked slowly past
the upturned desk. “Their priority is saving lives and
extinguishing fires. Any damage to property is of secondary
consideration. As it should be,” he added, a note of
understanding in his voice.

The trio made their way down the hall until they
came to the main rotunda, where two circular staircases led to the
upper floors. Or, at least they had done so. Now both sets of stairs
were choked with burnt timbers and debris. Chris looked up and saw
that the roof had caved in far over their heads and had rained wooden
beams, wiring and shingles down to the floor below.

When he saw the devastation, the judge let out a
long breath and his shoulders slumped. Natalie patted his arm
silently and, when man glanced at her, she smiled sadly but said
nothing.

Chris could still smell the fire damage, even with
everything soaked with water. The bitter scent of ashes, burnt fabric
and melted plastic pinched his nose and he tried to breathe from his
mouth to avoid sneezing. It didn't help very much. Now he could taste
the fire.

“All of it, gone. Just like that.”
Judge Hawkes voice was bitter. “All of my history, all the
records, and, most importantly, many of our friends, destroyed. If
Lilith knew, how she would laugh.”

“Lilith is currently enjoying eternity up to
her neck in ice,” Natalie said pertly. “I doubt if
laughter is an exercise that she could indulge in anymore.”

Chris had been checking out the choked staircases.
He wondered how the firemen had reached the second floor. Not through
there, obviously. He decided finally that they must have climbed up
using a ladder. Unfortunately they didn't have one of their own. But
there might be another way.

“Judge?” Chris said. “If you
want to me to check upstairs, I think I might be able to climb over
the wreckage that's blocking the staircases. I'm small and light, so
I think I could do it without shaking the stuff loose.”

Judge Hawkes shot a calculating glance at Chris
and then at the stairs. He shook his head.

“I appreciate the offer, but no. It's too
dangerous. Besides, we know that the authorities checked out the
upper floors. I doubt if they missed anything.”

The judge looked around the circular room and then
nodded to his left. “There are stairs leading down to the
basement that way. Let's see if they are clear. I want to check out
the vault and see what's left.”

As they began to cross the room, stepping over
debris and walking around piles of shattered furniture, the judge
stopped abruptly. Chris followed his eyes and saw what had caught his
attention.

A Permanent Member of the Family by Russell Banks
Shadows in the Silence by Courtney Allison Moulton
Testamento mortal by Donna Leon
House of Memories by Benjamin Hulme-Cross, Nelson Evergreen
Renewed (Awakened #2) by C.N. Watkins
Delta Force by Charlie A. Beckwith
Maxwell Street Blues by Marc Krulewitch
The Billionaire's Secret by Ava Miles
Closed at Dusk by Monica Dickens
Justice by David Wood
Our partner