The Road to Nevermore (6 page)

Indeed Chippendale had been, the minute she suspected Pickerel was lost. She had also found many secrets along with the key.
The kind of secrets one can use against one’s enemies. She tried to cover her blush with a froglike “Harrumph!” but Gloom
saw her twinge.

“Now, now, nothing to feel bad about. I do like snoops. Please call me Shadewick. Or better yet, Gloomy. That’s what my nastiest
friends call me.”

Miss Chippendale blanched. “I’m here strictly on business.” She glanced around suspiciously and then she pulled her hood over
her head. “I prefer to make this quick. I have a proposition for you.”

Shadewick Gloom frowned. “I can only think of two things that would stand in the way of that. One is the Moral Authority’s
High Council.”

“No worries there. As head of the Investigative Branch, I can take care of them.”

Shadewick circled around her, rubbing his fingertips together. “My goodness, you’ve grown powerful. The other obstacle would
be my old apprentice, Grim Bones.”

Miss Chippendale’s smile was thin as a sliver. “There you have it. You get rid of him, and you will have your full rank back,
plus all those other benefits you’re hungry for. I shall be glad to look the other way, so long as you’re discreet.”

“Uhm, there are only two other tiny matters beyond taking care of Grim Bones.” Miss Chippendale clasped her hands behind her
back.

Chippendale’s effort at a casual smile shook her double chins. “I need two children brought over to the Afterlife. You can
do whatever you’d like with them, so long as they disappear.”

Billy knew only one hand that held that kind of power: Uncle Grim’s. He’d been granted that ability to help him with the impossible
task of being in too many places in too short a time.

Suspended seconds later, a stallion with a starlight mane galloped through the tumble-down cottage wall. It was Fleggs, and
the heroic skeleton sitting astride was Uncle Grim. The skeleton reined the horse to a stop. He wore his usual Cloak of Doom,
and the grin of an uncle very happy to see his nephew. Grim’s bones danced with the same blue glow and black sparks of energy
that had lit Billy up moments before.

As he dismounted, he said, “My boy, it’s so good to see you—quite unexpected, though.” Grim clapped a black-gloved hand on
Billy’s shoulder. “You’re looking very healthy.” His eyes crinkled in a deeper smile.

Martha and Millicent were bathed in the glow that danced between Billy and his uncle.
The plan worked,
Billy thought,
but Millicent’s going to fuss about missing the excitement.

Uncle Grim reached around Billy to pluck a dim orb out of Mordecai’s chest. Most souls glow with color, but this one was drab
as sandstone. Grim flicked the ball into the air, transforming it into a ghostly version of the old man. But before it floated
back down to the bed, Billy started in, “I trapped Pickerel. He’s in the magical vase. Now they’re after Pete and maybe Millicent’s
parents, and —”

“Slow down, my boy. I can keep time stopped—there’s no hurry.” Interlocking his fingers at his waist, he gave Billy his full
attention.

Billy led Grim through the story, one tangle at a time. When he was finished, Grim’s expression matched his name. “I’m afraid
we’ll have to sort this out straightaway. Too many Afterlifers are paying for Pickerel’s disappearance.”

With a gentle caress to the chin, Grim turned Billy’s head to face him. “Don’t worry, you did right to trap Pickerel, and
you’re doing right by telling me now.” He guided the boy away from the bed. “The best thing to do would be to tell my boss,
Oversecretary Underhill. He’s a member of the Moral Authority’s High Council.”

Seeming to remember why he’d come in the first place, Grim glanced over his shoulder. Mordecai’s spirit had gotten out of
bed and was drifting across the room. “Oh bother,” muttered Grim. Dark sparks of eternal energy trailed off his twirling finger,
and an iridescent circle opened in the air. Grim floated the ghost toward the hole. Gripping the tunnel’s edge, the old man
grumpily dropped through. The hole closed with a small burp as if it had digested something unsavory.

Fleggs trotted over to nuzzle Billy. He had always been able to recognize the boy, body or bones.

“There’s another matter we must face up to.” Grim smiled but his voice was stern.

“When I arrived, time had already stopped.”

Grim took Fleggs by the halter. “I’ve long suspected you absorbed some of my powers when you turned from a skeleton back into
a boy. I’m afraid that’s against quite a few Afterlife rules. So it’s past time I told Oversecretary Underhill about that,
too. Even the angel of death is bound by regulations, my boy.”

Billy’s mouth dropped open. “But … does that mean you’ll get shipped off to Nevermore?”

Grim drew the boy close. “Not if I can help it.” 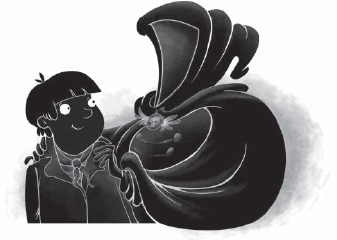 A cold sensation swept through Billy when Grim’s cloak grazed him.

“Oversecretary Underhill is a first-rate skeleton and a solid friend. He and I think the time for secret prisons and Afterlife
spying is over,” Grim said. “The Investigative Branch has too much control.”

Grim leaned down and looked Billy in the eye. “Truth is, they
think
they’re doing right. But don’t worry, we’ll set things straight. Right eventually flowers even out of the darkest wrong.”

Despite Grim’s grin, Billy felt unsettled. Lately, the adults around him had been awfully quick with assurances over things
they couldn’t control.

Uncle Grim stood, the hem of his cloak sweeping a trail of frost across the floor. Billy watched him swing into his saddle,
then felt a scorching blast from behind.

A voice pierced the room like shards of dark crystal. “And that, my old assistant, will only happen over my smashed bones.”

Shadewick Gloom stepped out of a whirling hole with his two huge shadow hounds snarling at his side.

Sad to say, but not every part of the Light Side is nice. Take Edgeton, for example. It’s gray, dreary, and slop-full of dilapidation.
That is because of its unfavorable location: next to the Dark Side. This sorry district is reserved for the lowest rungs of
society, namely skeletons, and ghostly fugitives like Glass-Eyed Pete.

Pete had sought shelter in this shabby corner of the Afterlife now that Chippendale’s spying eyeballs were everywhere. At
the moment, he was lying low in the Boneyard, a rustic pub, filled with smells like oiled wood and pipe smoke.

Minnie Lumbus sat behind the backroom bar, tossing an occasional smile toward Pete. She was plump for a skeleton.
Large boned
she would say—all the better to wrap her guests in bone-crunching hugs when they needed them. Widow Lumbus had known Glass-Eyed
Pete for many years, and second to High Manners Manor, the tavern was his favorite haunt. 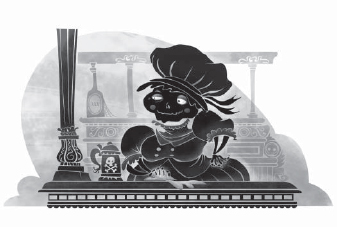 Pete looked splendid in his translucent blue coat. It was double buttoned with wide lapels and hung down to the tops of his
buccaneer boots. Despite the softness of his ghostly glow, his face was wrinkled as a mummy’s wink, but rarely wore a frown.
Jenkins, his parrot, sat on his shoulder—a jewel-like green to Pete’s filmy blue.

Pete scanned the two rogues who faced him with his glass eye. It was believed the eye was magic and helped him judge the souls
of others. “Lads, thank ye for comin’ by at such an early hour. An hour too early from the look of ye.”

“Too right.” Ned—Mrs. Lumbus’s grown son—clattered in agreement. He was a hulking fellow with a battered jawbone, who wore
the red cloak and silver emblem of a Skeleton Guide. It was his job to escort condemned souls to the Dark Side.

“This might make it worth yer while.” Pete materialized a golden coin. It turned and floated within the gentle column of his
pipe smoke. “One hundred golden wishes to both of ye, if ye can help me.” Pete palmed the coin before anyone could grab it.

“Where’d you come across that, Pete?” Ned’s chair creaked as he leaned forward. “The most you’ve had in your pockets before’s
been a hungering moth.”

Pete took a steady pull of his pipe. “My friend will be bringing the rest of the loot soon.” His good eye crinkled like salty
sail canvas. “But with the gold comes a mission, lads.”

“I’ve a bad feeling about this.” Ned sighed.

“One hundred in gold can go a long way in calming our fear.” This smooth voice belonged to Roger Jolly. He was a bit of a
dandy by skeleton standards, wearing a tattered tailed suit and a top hat. Unlike most skeletons, Roger Jolly had hair. He
wore it long, black, and sleek.

Pete exhaled a smoke plume. It circled the table and then drifted apart. “Very well, me buckos, let’s get down to business.”

The skeletons leaned toward Pete—Ned on his ham-sized fists and Roger on an elegant elbow. Pete paused for dramatic effect,
but the air was already thick with curiosity. “Here it is, lads.” He spread his hands on the table. “How do ye get me into
Nevermore? And
more
importantly, how do ye get me back out?”

Fifty Shades of Alice Through the Looking Glass by Melinda Duchamp
Cheryl Holt by Too Tempting to Touch
The Poet Prince by Kathleen McGowan
The Custodian of Paradise by Wayne Johnston
Addicted (A Billionaire Romance Novel) by Michelle, Aubrey
The Poison Tree by Henry I. Schvey
Escape from Shangri-La by Michael Morpurgo
Paint It Black by P.J. Parrish
Legon Restoration by Taylor, Nicholas
Fangs for Freaks by Serena Robar
Our partner