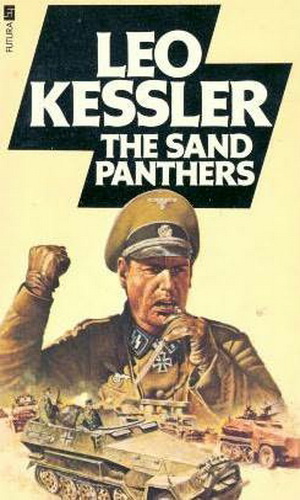 SS Assault Regiment Wotan had been sent to join the Desert Rats, their objective to liberate the Egyptian army and to wrest the control of Alexandria from the British forces. But the men of Wotan found that Rommel didn't want them, and as they set off into the unmapped waste of the desert, they realised that something about this mission was wrong - very wrong indeed. One thousand kilometres of uncharted desert lay before them: a blazing, barren, limitless hell, just sand and sun and sky - the only living creatures an enemy lying in wait for them, silent and unseen...

Section One: Plan of Attack

Section Four: A Battle is Proposed

Section Five: Stab in the Back

Also by the Same Author

SS Assault Regiment Wotan had been sent to join the Desert Rats, their objective to liberate the Egyptian army and to wrest the control of Alexandria from the British forces. But the men of Wotan found that Rommel didn’t want them, and as they set off into the unmapped waste of the desert, they realised that something about this mission was wrong – very wrong indeed.

One thousand kilometres of uncharted desert lay before them: a blazing, barren, limitless hell, just sand and sun and sky – the only living creatures an enemy lying somewhere in wait for them, silent and unseen…

At that moment von Dodenburg had never felt gloomier in his life. His 1st Company had just suffered tremendous losses beating off the Tommy landing at Dieppe
*
and now with the gaps in their ranks filled up with raw lads from the
Reich
, they were expected to go into action again – with Rommel in Africa.

‘They don’t like the SS out there, you know, Schulze,’ von Dodenburg broke the heavy silence, disturbed only by the slither of the shingle on the beach below. ‘All those sniff-noses of the
Afrikakorps
want to fight a private war with the Tommies, as if they were all fifteenth century knights in armour. They don’t fancy the Black Guards’ methods, I hear.’

‘Maybe, sir,’ Schulze commented, his lecherous blue eyes gleaming suddenly. ‘But they’ve got those belly dancers out there, all bust and backside. Lovely grub! And sirs we’ll get our knees brown!’

As the first shrill silver notes of the bugle outside alerted the company, Major von Dodenburg cried:

SECTION ONE:
PLAN OF ATTACK

‘Now you are going to show those buck-toothed Tommies back in the Delta how really to put in a commando raid.’

The Desert Fox, Field-Marshal Erwin Rommel, swung round from the excited young Lieutenant of the
Afrikakorps
, who had just burst into the underground HQ with the news, and faced his staff. ‘Gentlemen, the English commandos have begun their attack on Tobruk! Precisely on time as expected. The Tommies are very exact in their habits.’

There was a polite ripple of laughter among the bronzed-faced staff in their sweat-blackened khaki, which died with the sudden wail of an air-raid siren and the throaty crump of Tobruk flak.

The Desert Fox frowned. He looked at the Major with the Knight’s Cross around his throat and the silver SS runes on his collar, but with the pale face and knees of a newcomer to the desert war ‘Major von Dodenburg.’

‘Major, the English have been carrying out commando raids in the desert for two years now. And they have become very good at it. I should know: they nearly killed me last year. Fortunately we are in position to know exactly what their plans are –
in advance
,’ he emphasised the words and paused, as if he expected the handsome SS Major to say something.

But the CO of the 1st Company of
Assault Regiment Wotan
, who had only arrived in Tobruk with his tanks the day before, remained silent. He was new to the Desert and bewildered by the strange type of battle he had found himself plunged into so suddenly. Rommel nodded to Captain Schmidt, his bespectacled adjutant. ‘The radio,’ he barked.

The hot underground room was filled immediately with a confused babble of voices speaking in German and English, being transmitted to the HQ by the
Afrikakorps’
interceptor unit.

‘The Tommy commandos are attacking in three groups,’ Rommel explained. ‘Two groups from the sea and one from the land. The aim of the land force is to establish a bridgehead to the south side of the harbour. When they have that, the other two forces will land from torpedo boats and motor launches. Together the three groups will remain within the Tobruk perimeter for twelve hours, wrecking our installations and destroying the bombproof oil tanks, which hold my reserve supplies of fuel.’

Major von Dodenburg’s face must have reflected his disbelief at the accuracy of Rommel’s outline of the enemy plan-of-attack, for the Desert Fox said: ‘It is true to the very last detail, Major. Believe me, our sources of information in the enemy camp are unimpeachable.’ He wiped the beads of sweat from his high forehead. ‘That is the Tominies’ plan. But, as you know, today is Friday 13 September – and it is going to be a very unlucky Friday the thirteenth indeed for the Tommies.’

The Field-Marshal’s face hardened and von Dodenburg, puzzled by Wotan’s sudden summons to the Middle East and by Rommel’s personal attention to an officer of his low rank, could see why the Tommies called him the Desert Fox. There was something very sly about his ruthless, vulpine face.
‘Today we are going to exterminate them, von Dodenburg!’

It was dark but Colonel Haselden’s SAS men and the German Jews, who, dressed in German uniform, had got them through the
Afrikakorps
perimeter without difficulty, knew exactly what to do They had trained long enough for this operation. Forming up into small teams, each with a German-speaking guide, they headed for the searchlights on the dock.

Colonel Haselden in the lead nodded his approval. Above them the twin-engined RAF Mitchells were zooming in, right on time, ignoring the flak which peppered the night sky all around them. At tree-top height they roared over the desert. Evil black eggs started to tumble from their bellies in lethal profusion. Haselden raised his voice above the racket of the exploding bombs.
‘Come on, lads, let’s give them hell!’
he cried
.

Next to him, Sergeant Hayden raised his Tommy gun and fired a burst at the nearest searchlight. There was a scream of pain, a clatter of breaking glass and suddenly the silver finger of light poking the clouds vanished. A second later they surged forward to the attack.

Green and red Very lights, hissed into the sky. White tracer zipped through the air, and suddenly there was the angry snap and crackle of small arms fire everywhere. A commando went down, then another. A German Jew followed, cursing madly in German in his dying agony.

‘You can say that again, sir,’ Hayden gasped. ‘You’d think the buggers’d known we were coming…’ the high-pitched burst of Spandau fire nearly cut him in half. He tumbled to the ground, almost bringing the Colonel down.

‘I’ve ‘ad it, sir. Took half me sodding chest away,’ Hayden slurred the words through a mouth which was rapidly filling with hot, salty blood. ‘Fer chrissake, bugger off out of here…’

The words ended suddenly. Haselden peered down at Hayden’s eyes, unnaturally large and startlingly terrified. His head lolled to one side just as the survivors of Force B’s first wave went to ground, unable to advance against the withering German fire. In spite of the slugs hissing through the air like angry fire-flies, Haselden seemed unable to move. He was too dazed. Just as the first bullet slapped him a tremendous blow in the right shoulder and flung him against the wall of the nearest hut, he knew that the operation was already a failure. The Germans had known they were coming. As he started to slither down the wall, dragging a bright red trail of blood behind him, the dying Colonel realized with a sense of overwhelming bitterness that they had been betrayed!

For a moment the loudspeaker in the claustrophobic staff room fell silent. Von Dodenburg started to wipe the pearls of sweat from his face. The loudspeaker crackled into life again and von Dodenburg’s hand remained where it was. That horrible, pain-racked voice of the dying British naval officer, trapped in the sinking torpedo boat filled with dead sailors and soldiers, came through again.

It was breathless with hysteria.
‘Oh Christ, I can’t stand it… My foot’s fallen off… Where’s my bloody foot?’

Von Dodenburg felt the hairs at the back of his neck stand erect and he shuddered in spite of himself.

There was a pause, broken only by the dying man’s harsh breathing. Then he sobbed,
‘They’re all dead…. All dead…. They’ve left me. My God…’

Over the loudspeaker came the most unnerving sound of all. The wailing, uncontrolled sobs of a man breaking down altogether. Rommel nodded to his adjutant. Schmidt reached up and clicked off the loud speaker. Outside the sound of firing was dying away. Inside the underground HQ, the staff officers stood there transfixed, horrified by the slaughter of the British force although they were all hardened veterans who had undergone the mayhem of the trenches in the First World War.

Rommel remained unmoved. His face was set in a smile of ruthless triumph. The Desert Fox had beaten the British again and he was unable to conceal his sense of delight. Suddenly he brought his fly-swat down on the map table with a smart crack. The staff officers jumped, startled.

‘Meine Herren,’
he announced. ‘Those who are left of the Tommies are running now into the desert for their lives. We have beaten them decisively!’

There was a murmur of agreement from the assembled officers. Rommel slapped his fly-swatter down on the table once again. ‘Gentlemen, what you have just experienced is already history, and we’ll leave the Tommies to reflect upon the past – they are very good at it. We Germans have other and better things to do.’

He turned and stared at von Dodenburg, as if trying to see something behind the young officer’s face. ‘So, Major, you have seen your first desert commando raid.’ The Field-Marshal thrust out his pugnacious, obstinate chin aggressively. ‘Now
you
are going to show those buck Tommies back in the Delta how really to put in a commando raid.’ He pulled on his peaked
Afrikakorps
cap and nodded to Schmidt. ‘Attend me at zero hundred hours tomorrow morning, von Dodenburg. I have work for your SS ruffians.
Gute Nacht, meine Herren.’
Casually touching his fly-swatter to his cap, the man who had beaten every British general in Africa for the last two years, went out into the blazing Libyan night.