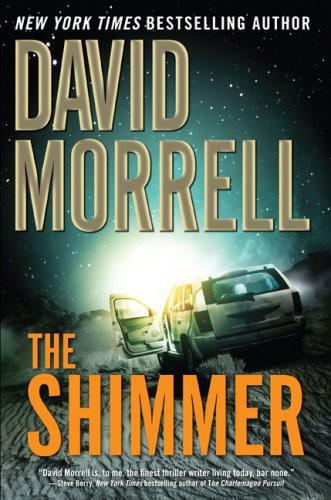 The Phenomena Described In This Novel Appear On Many nights outside the town of Marfa in west Texas. They were observed as long ago as when only Native Americans occupied the area. No one has adequately explained them.

Are not the days of my life few?

Let me alone that I may recover a little

Before I go whence I shall not return, To the land of darkness and the shadow of death, The black, disordered land

Where darkness is the only light.

--the book of Job

From fifteen hundred feet off the ground, the blue pickup truck looked like a Matchbox toy. Normally it would have blended with traffic, but on this clear Tuesday afternoon in early June, the pilot watched the truck race past other vehicles and veer back and forth between lanes as the driver searched for any open space he could find.

The aircraft, a Cessna 172, had high wings and a single propeller.

Its pilot was a forty-year-old police officer named Dan Page. He knew that the driver of the pickup was male because he monitored a police radio through his headphones and was aware that ten minutes earlier the man had shot and killed another man in a feud between drug dealers at Fort Marcy Park. A police officer driving by saw the shooting. When he sped into the park, the assailant fired through the cruiser's windshield and killed him. Park workers who saw the murders all identified the shooter as a thin, twentyish Anglo with a shaved head and a white T-shirt, the short sleeves of which revealed a large tattoo on his left arm.

This was Page's day off. A private pilot, he enjoyed flying his Cessna from Santa Fe's small airport and, as he phrased it, "getting above it all." But when his police radio transmitted news of the chase, he headed over the four-mile-wide city to where the truck had last been seen, hoping to spot it among Santa Fe's low buildings and provide directions to his fellow officers in the pursuing police cars. Five minutes later, he had it in sight. The truck's frantic, random route would have been difficult to follow on the ground but was obvious from the air.

"I'm five blocks in front of him," another officer's voice answered quickly. "I can cut him off."

Page stared down helplessly as an oncoming car swerved out of the truck's way, lurched onto a sidewalk, and hit an adobe wall, earthen bricks cascading onto the hood. He imagined the sound of the crash, the violence somehow gaining in magnitude because of the distance.

"If he's headed toward the interstate, we've got the ramps blocked,"

"I'll intercept him at Cordova!" a different voice blurted.

Peering down toward a crosswalk, Page noticed pedestrians scurrying to avoid the truck. A car was forced off the road.

"Too late! He's past Cordova!"

"We'll set up a roadblock at Saint Michael's Drive."

"Better make it Rodeo Road! He's driving so fast, you won't have time at Saint Michael's!"

Indeed, the speed with which the truck covered distance was astounding. The other vehicles on Cerrillos Road seemed to be standing still.

My God, he's got to be doing over a hundred, Page thought.

Other drivers must have seen the truck speeding toward them in their rearview mirrors, or maybe the fugitive kept blowing his horn.

For whatever reason, traffic veered out of the way.

"We've got the intersection at Cerrillos and Rodeo Road closed!" a voice shouted.

Immediately the truck swerved onto another side street.

Page finally understood the pattern. "I think he's got a police radio!"

"He changes directions whenever you tell me you've got a street blocked! He must be listening to us! Now he's turning into the Lowe's parking lot!"

Customers leaving the huge hardware store darted to the side as the truck sped toward the movie theater at the end of the lot. It disappeared into a parking garage.

Circling, Page watched for a man in a white T-shirt to leave the garage and try to get away on foot. But in June, a lot of men wore T-shirts, and from this altitude, it was almost impossible to distinguish colors on clothing. Moreover, the color might be irrelevant--the driver could force someone in the garage to give him a different-colored shirt so he could walk away without attracting attention.

A car left the garage.

He watched the tiny figures of pedestrians proceeding toward the theater's entrance. He looked for anyone whose pace was hurried.

An SUV left the garage.

He can change vehicles as easily as he can put on another shirt, Page realized.

A sports car left the garage.

From above, Page kept track of all three vehicles and described them to the officers on the ground. The first one reached a lane that took it to the left toward Cerrillos Road. The SUV reached the same lane and turned in the opposite direction, toward a side street. The sports car headed back toward the parking lot in front of the hardware store.

Meanwhile, the pursuing police cars converged on the area. Page saw their flashing roof lights and imagined the wail of their sirens.

No other vehicles came from the garage. At the hardware store parking lot, a police cruiser stopped the sports car. Page switched his view toward the first vehicle that had left the garage. It was stopped at the entrance to Cerrillos Road, unable to find a break in traffic. In contrast, the SUV faced no obstacles as it drove leisurely in the opposite direction, along the lane toward the side street.

Page had a hunch and followed it. He descended a hundred feet, doing nothing drastic, nothing the FAA would object to, but even so, the downward motion made his engine grow louder.

The SUV seemed to drive a little faster.

He descended another hundred feet, making his engine sound even more insistent.

"He's below me, in the SUV!" Page yelled into the microphone, testing his theory by flying another hundred feet lower and trying to provoke a response.

He got one. The vehicle surged forward and skidded onto the side street.

The SUV swung onto the multilane road and zigzagged through traffic, its speed so reckless that cars swerved to get out of the way. Two of them crashed against each other. Each time the vehicle abruptly changed lanes, it rocked a little--not as stable as the truck had been.

Page glanced farther along Airport Road, gaping at a gasoline truck that emerged from a service station. Oh, my God . . .

When the SUV changed lanes again, the abrupt motion caused it to lean. Instead of tipping, it managed to jolt back onto all four wheels. But as the driver tried to find an open space in another lane, he must have yanked the steering wheel. The vehicle tilted more severely, balanced on two wheels, fell all the way over, and crashed onto its side.

Throwing up a shower of sparks, it slid along the road.

The SUV hit the tanker, tore a gash underneath, and burst into flames as the sparks ignited the gasoline cascading from the fuel truck's belly.

A fireball swelled upward. Banking from it, Page felt the shock wave. It took several moments before he could make his voice work and radio for an emergency team. Dark smoke drifted past him.

The debriefing room consisted of metal chairs arranged in rows before a blackboard. Overhead, fluorescent lights hummed and made everyone look pale as the police chief listened to their reports. Page glanced through a window and saw several television broadcast trucks in the police station's parking lot.

"Okay, you told me what you did right. Now, how about what you did wrong?" the chief demanded. "That press conference is in fifteen minutes. I don't want any surprises."

"We weren't chasing him," one of the officers, Angelo, insisted. "We never endangered any civilians. All we did was try to get ahead of him and cut him off."

"Right," another man, Rafael, added. "Even though the bastard shot Bobby, we didn't overreact."

"He was driving a hundred miles an hour," an officer named Vera said. "It's a miracle the only other driver he killed was the poor guy behind the wheel of that gasoline tanker."

The chief looked in Page's direction.

Page tried not to imagine the agony of the tanker's driver.

"With the state police helicopter in the hangar for maintenance, the only aircraft available for police use was mine. I warned the airport traffic controller to advise other planes not to fly over the city. I stayed above the minimum required altitude. No FAA regulations were broken. Nobody was at risk."

The chief swept his gaze across the group. "Anybody have anything to add? Any screw-up I should know about?"

The group was silent.

"Then I'm ready to talk to the reporters."

Page hung back as they all rose and began to leave the room.

"Want to join us for a beer?" Angelo asked.

"As soon as I tell my wife I'm okay," Page answered. He didn't need to ask where they'd meet. They always went to the same place--a sports bar on Cerrillos Road.

He tried Tori's cell phone, and for the fourth time it was her voice saying, "Please leave a message."

Yet again he said into the phone, "Hey, it's me. Call me when you get this."

He glanced at his watch, the digital display of which showed 7:23.

Where is she? he wondered.

Turning into the driveway of his single-story home, Page pressed the garage-door opener that was attached to his SUV's sun visor. As the door swung upward, he saw that Tori's Saturn wasn't there. He drove in, turned off the engine, got out of his Grand Cherokee, and closed the garage door.

Entering the shadowy kitchen, he noticed how quiet the house felt.

A note lay on the table.

Gone to see my mother.

This made Page frown because Tori's mother lived in San Antonio, Texas, eight hundred miles away, and Tori hadn't said a word about wanting to visit her mother. What on earth could have caused her to make such a spur-of-the-moment trip? he wondered.

The only explanation he could think of was, Some kind of emergency. She got a phone call with terrible news from her mother--no, about her mother--so she bought a last-minute plane ticket and hurried down to Albuquerque.

The state's only big airport was in Albuquerque. The drive down from Santa Fe took an hour and fifteen minutes. Normally Page and Tori used his plane when they visited her mother. But because he'd been flying and couldn't answer his cell phone, Tori hadn't been able to tell him what had happened.

Sure. That makes sense, Page thought.

Even if I wasn't able to answer my phone, that wouldn't have prevented her from leaving a message.

The kitchen phone hung on a wall next to the fridge. Page went over to it, looked at a list taped to the side, found the number he wanted, and pressed the buttons. He expected to get the answering machine, but an elderly voice answered.

"Margaret? Is that you?"