Read The Silence of the Chihuahuas Online

The Silence of the Chihuahuas 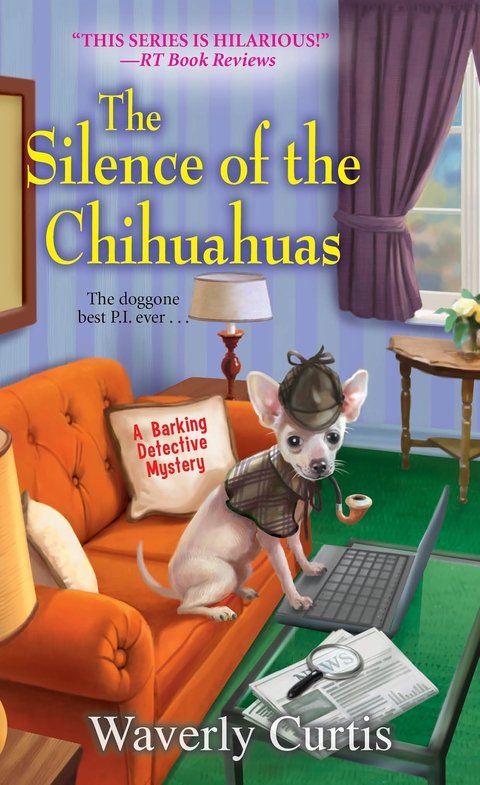 TAIL-WAGGING PRAISE FOR THE BARKING DETECTIVE MYSTERIES
THE BIG CHIHUAHUA
“This series is hilarious! The antics of Geri and her talking dog make the reader laugh out loud. An interesting cast of characters, an enjoyable read.”
â
RT Book Reviews
Â
“Pepe and Geri make a great crime-solving team. Guaranteed: lots of smiles.”
â
Hudson Valley News
Â
CHIHUAHUA CONFIDENTIAL
“Hollywood is the stage for this enjoyable caper starring amateur PI Geri Sullivan and her talking Chihuahua/partner, Pepe. The characters are comical, especially Pepe, who will have you laughing out loud. A great read.”
â
RT Book Reviews
Â
“Light as a feather and a whole lot of fun.”
â
Seattle Times
Â
“Hop on board the TV-studio tour bus for this light cozy.”
â
Library Journal
Â
“An adult mystery with young adult appeal . . . The second in Curtis's fun new series featuring Geri and Pepe is tailor-made for anyone who can't get enough dog mysteries and those readers who never miss an episode of
Dancing with the Stars
.”
â
VOYA (Voice of Youth Advocates)
Â
DIAL C FOR CHIHUAHUA
“Three woofs and a big bow-wow for
Dial C for Chihuahua
. Pepe is one cool sleuthâjust don't call him a dog! I really loved the book.”
â
Leslie Meier
, author of the Lucy Stone mysteries
Â
“Readers will sit up and beg for more.”
â
Sushi the Shih Tzu
, canine star of the
Trash 'n' Treasures
mysteries by Barbara Allan
Â
“Writing duo Curtis has created a humorous but deadly serious mystery. Pepe is a delight and more intelligent than most humans in the book. An ex-husband and current love interest keep Geri's life hopping. Crafty plotting will keep you engrossed until the end and have you eagerly awaiting the next book.”
â
RT Book Reviews
, 4 stars
Â
“Every dog has its day and there'll be plenty of days for Geri Sullivan and Pepe in this fun twist on the typical PI partnership.”
â
Simon Wood
, author of
Did Not Finish
Â
“Waverly Curtis has created a delightful cast of human and canine characters in
Dial C for Chihuahua
. Pepe never loses his essential dogginess, even as he amazes gutsy Geri Sullivan, his partner in crime detection, with his past exploits and keen nose for detail. I look forward to Pepe's next adventure!”
â
Bernadette Pajer
, author of the Professor Bradshaw Mysteries
Â
“Move over, Scooby-Doo, there's a new dog in town!
Dial C for Chihuahua
is a fun and breezy read, with polished writing and charming characters, both human and canine. If you like a little Chihuahua with your mystery, former purse-dog Pepe is a perfect fit!”
â
Jennie Bentley
, author of the Do-It-Yourself Home Renovation mysteries
Also by Waverly Curtis
Dial C for Chihuahua
Â
Chihuahua Confidential
Â
The Big Chihuahua
Â
The Chihuahua Always Sniffs Twice
Â
A Chihuahua in Every Stocking
(e-novella)
The Silence of the Chihuahuas
Waverly Curtis