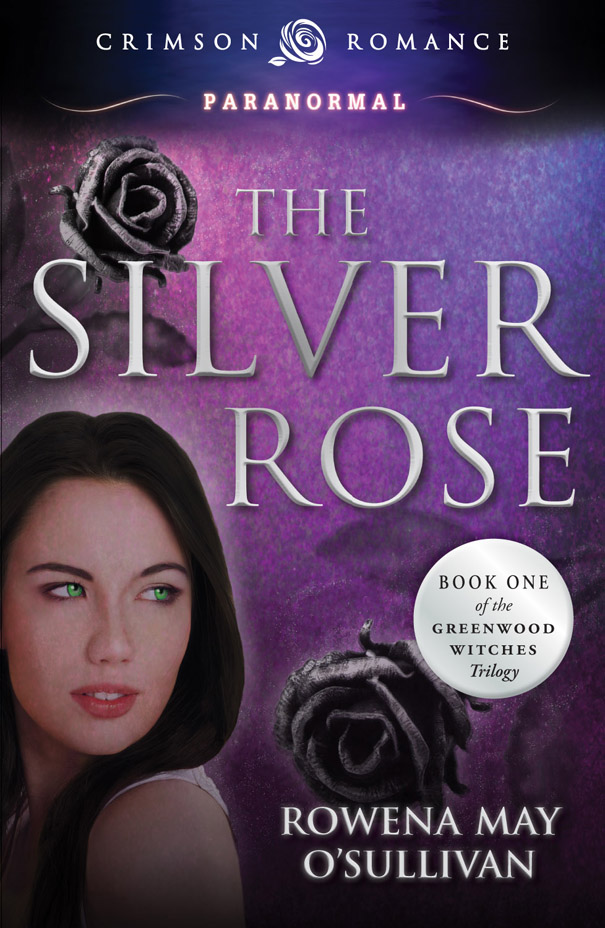 The Silver Rose
Rowena May O'Sullivan

Copyright Â© 2012 by Rowena May O'Sullivan

Break out the bubbles â it's time to celebrate! French champagne if you please. Cheers to the cocktail girls, Joanne Graves and Glenda Leader. A very big thank you also to Frances Housden, Jean Adams, Maree Anderson, Alister Livesy and Mary Gorman. To my wonderful family, all of you, thank you for allowing me to prattle on for years about one day being published without ever complaining. OK. Maybe you complained a little, but look â I'm published. Yippee!

Aden Dragunis arrived in Raven's Creek late one Sunday in September in the wake of a southerly squall fresh from the Antarctic. His early arrival sent a flurry of whispers out on the wind and before the sun had set, nearly everyone who was anyone in the small town knew he had arrived and was booked into Room 22 at Raven's Creek's Inn.

Aden wasted no time. He lifted the window latch with the flick of a wrist, pushed it open, and stared out and down the main street into the epicenter of Raven's Creek. Crisp, cool air assailed and grounded him. Focused, he cast a locating spell and found his target within seconds. Magic fairly sparkled down the short lane where the sisters resided. All was as it should be, he acknowledged, so he paused to inspect the quality and luminosity of their skills. A protection spell like no other deserved his grudging appreciation. Closing his eyes, he went inward, connecting with his inner sight before tracing the intricate network of ley lines threading the entire street. With stealth, his magical nature and superior ability helped him evade the security network protecting their homes.

Although Aden's physical body remained stationary at the window, he could see clearly, as if his eyes remained open. He moved on through the town, following the ley lines as they merged and branched out into the neighborhood. This time he searched for others with magic. With senses honed from centuries of practice, he investigated the side streets and alleyways with the speed of a hawk seeking its prey. He went deeper; opening his mind's eye to utilize his ability to soar freely outside his body, he extended his vision into the surrounding countryside. Through Great Kauri Park, past a sentinel eight-hundred-year-old native Kauri tree, then deeper into the countryside where lifestyle blocks blurred one into the other. He hunted for others of his kind until he reached the ocean; the tang of salt from the sea spray dusting windows of homes built precariously close to the ocean. Waves crashed and rolled on shores.

Nothing. Not a trace of warlock essence. Anywhere!

His eyes snapped open, and he was back in his dismal hotel room. “Dragons' Blood!” It was going to be a tougher assignment than anticipated. He could not piggyback upon the magic of another warlock in order to hide his own if there were none like him living nearby. Caution was imperative. Living within the circle of the Greenwood witches would entail the strongest shielding spell he could cast. Magic of an intricate blend only few could successfully weave would be essential. Only those who attained immortal status were capable of such skill. One such as he. Aden Dragunis: Warlock, immortal and Dragon of Marylebone Coven.

Unable to stand another second in the close confines of his room, he hooked his ankle-length coat over two fingers, flung it across his shoulder, and headed out into the waning light. The coat flapped like wings behind him, and he felt neither the cold nor the sting of the biting wind swirling debris in his wake as he strode purposefully down the street until he reached the infamous Greenwood Gallery.

A renowned showcase for New Zealand talent, the gallery was owned and operated by Rosa and her two younger sisters. Rosa's work as a silversmith and jeweler was rumored to be as good as his. He huffed and amusement tugged at the corners of his mouth. This he found ludicrous. Witch she may be, but immortal she was not. Taught by the greatest Master Warlock in Witchdom, and with several hundred years to perfect his craft, Aden was confident her work would not be equal to his.

But what he saw next had him unwillingly reassessing his opinion. Squinting against the reflection of the setting sun in the windows, he inspected the protective spell encasing the building. Three layers of color, one for each sister melded into each other, twisted into a complex protection spell like none he'd seen before and yet he knew instinctively to whom each color belonged. All reflections of their innate magical abilities. Vibrant purple for the volatile middle sister Alanna and a radiant azure for the younger, peaceful Beth. Rich magenta for Rosa, his current assignment, haloed by the most brilliant band of gold light, a color only for those whose time has come. Aden sucked in a breath. He did not need to meet the person this magical spell and glorious aura belonged to in order to recognize just how close she was to achieving mastership. What a complete waste it would be if her life were snuffed out by his charges, the small but lethal dragons of Marylebone.

But there was another thread woven into their magic. Something he had never encountered. Something new that both intrigued and aggravated him. He'd thought this assignment an easy one. He was beginning to get an inkling it was anything but. A Maori blessing had been braided into the spell, ensuring the old Kauri gallery remained impenetrable. Even he, one of only a handful powerful enough to meld his magic into the network surrounding the gallery, felt the prickle of warning and resistance as he pushed against it, testing, judging, and finally admiring. He might not have met Rosa yet, but he could not fault the perfection of this magnificent spell. It was masterful in its inception and creation. It was better than any he'd ever created.

Rosa was worthy of the Bells.

Ominous and powerful, the encroaching mist blinded Rosa Greenwood as it swirled about her ankles, ensuring she could see nothing. Expectation whispered secrets across her skin. Fear, unexpected and unwanted, curled through her. Her life was forever changed. She knew it as clearly as she breathed. A metallic presence on her tongue caused a tremble of apprehension in her heart. Acid pooled in her mouth, and she licked dry, burning lips.

No. Surely not â¦

Suppressing a growing unease, she felt blindly ahead with her hands knowing the ornamental pond she habitually sat by to mull over the day's events was close but the cold surface chilled her right through to her soul. Her skin prickled with warning. She circled quickly, certain she was being watched. But how? And by whom? Pressing her palms together, she entwined her fingers, twisting them into white knuckles of anxiousness.

Then she heard them. They tolled, heavy with portent. Echoes reverberated through the vapor, jangling her nerves. No mist could hide what they signified.

“No! It's too soon. I'm not ready!” Her heart beat an erratic staccato against her breastbone. Fear pricked her skin like a thousand sharp needles.

It should have come as no surprise. It came to all wielders of enormous, powerful magic. She should be prepared â¦ but she was not.

It was futile to block her ears with the palms of her hands. She tried anyway, but the sound resonated within and without, leaving her with no choice but to accept the inevitable.

The Bells of Marylebone tolled for her.

A gust of wind corkscrewed through the branches of the trees in the yard, causing them to sway to a force greater than their own. Leaves danced in spirals of never-ending motion, teasing the ground before soaring off again and taking all traces of mist with them.

The Bells of Marylebone tolled for Rosa Greenwood, mortal witch with too much power and not enough strength to control it on her own.

Rosa's mind churned with the implication such a momentous event brought with it. Her life was forever changed. Her dreams, her hopes and wishes hung in the balance. She had thirty days to bind her magic with a mate â someone with powerful magic or potential. It was the only way she would survive. Either that, or surrender her magic forever. But that would be like surrendering her soul. She wanted to live to see her sisters happily married with children. She dreamed of achieving Mastership, of ascending Marylebone and taking on the mantle of immortality. Her dream to preside at Marylebone Coven, the worldwide ruling body for all witches, was in danger of never being realized.

Well, she had power by the bucketful. More than she'd thought. So much it seemed that she now understood why she was experiencing uncontrollable surges of magic at the most inopportune moments. She'd thought it a lack of skill as she worked on more intricate and complicated spells. She blanched, realizing now that those flare-ups had been a precursor to a more dangerous power. One that could hurt her, her family, and everyone else in her small community.

What fool she. Rosa didn't deserve to attain immortal status. She was an unprepared witch.

Monday morning, Aden stood across the road from the gallery and watched the three sisters as they prepared to open the gallery. He was stunned and aggravated by his response to seeing Rosa Greenwood for the first time. He recognized her instantly. There was no missing the small flares of red in her rose-gold aura. She was definitely heading toward flaming out, and he also saw she was aware of it and was attempting to dampen the glow so her sisters didn't suspect anything.

If they were at all observant, it wouldn't take them long to notice the changes in Rosa's aura. But right now they were too busy staring out at him while he stared in at them. He huffed his irritation, and a puff of cold air misted before him. He'd cast a weak shielding spell to hide himself while he observed them, but it had worn off. Intent on not tripping any suspicion as to what and who he was, he could not risk casting another spell while they watched. Instead, he stood, stunned by an overwhelming sense of â¦ what? Recognition? But he'd never been to Raven's Creek. He'd never met any members of the Greenwood family in the past. He refused to believe that the feeling he felt was desire. Desire for a woman he had no business wanting. Heat seared and constricted his breath and burned his lungs. His stomach retaliated by clenching into a mess of knots, and he swallowed convulsively.

Sweet Carolina by Roz Lee
Love Story by Kathryn Shay
The Long Road to Gaia by Timothy Ellis
Broken Fences (A TroubleMaker Novel, #1) by Gendron, Kelly
The Middlesteins by Jami Attenberg
Vignettes of a Master by Luke, Jason
Never (The Ever Series Book 2) by C. J. Valles
Frozen by Lindsay Jayne Ashford
Brass and Bone by Cynthia Gael
Candles Burning by Tabitha King
Our partner