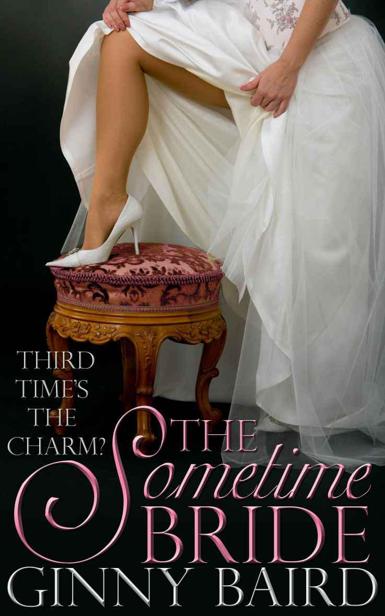 This ebook is licensed for your personal enjoyment only. This ebook may not be re-sold or given away to other people. If you would like to share this book with another person, please purchase an additional copy for each recipient. If you're reading this book and did not purchase it, or it was not purchased for your use only, then please return to Amazon.com and purchase your own copy. Thank you for respecting the hard work of this author. To obtain permission to export portions of the text, please contact the author at [email protected]

Characters in this book are fiction and figments of the author's imagination.

Carrie St. John strode to the edge of the pool and tugged the ring from her finger. One year, six months, and four days exactly. Yank. The dang thing was stuck.

Carrie looked down in frustration at the glittering diamond offset by tiny emeralds. Beautiful, yes. But-- yank, the ring worked free of her knuckle and glided off her narrow upper finger--only a poor reminder of a relationship gone sour.

Carrie clutched her hand around the meager gems, wondering if Wilson had paid more for them, he’d have been more reluctant to leave. Hogwash, she thought tossing back her arm and prepping for a long-shot. Wilson would have left regardless. And, if it hadn’t been for Teresa, it would have been for someone else.

But of all the rotten things to do! Take Carrie to a scenic country inn, then drop the bomb. More like a blazing comet, Carrie thought, feeling the raw burn in her heart as she lobbed the ring forward over the water. The engagement ring pitched in a perfect arch toward the water, then plopped beneath the surface with a deafening calm.

Mike Davis ran a flat palm along the bumpy bottom surface of the pool. It had to be down here somewhere, darn it! Four months of hard-earned commission down the chlorined drain!

If Mike had had any inkling how callus Alexia could be, he would have never gone to the trouble. Not to mention the biting expense. Now if he couldn’t find the darned ring, he’d be set back financially for nothing!

Already was set back financially for nothing, Mike reminded himself, feeling his puffed out cheeks drain of air. This was his third dive under and still nothing doing.

Mike fishtailed over to the center of the pool where something glistened against its craggy bottom. Yep, that was it! Had to be...

Mike swept toward the gemstone like an alligator on the prowl, then plucked the tiny ring off the pool bottom, examining it through the blurry haze caused by pool lights and chemicals. No way. But it was. Somebody else’s ring entirely. The ring Mike had presented to Alexia had been a solitaire!

Despite years of high school swim team accomplishment, Mike felt his wind quickly abating. He’d been down here too long, he realized, angling toward the surface and pressing his heels off the bottom.

Mike rocketed skyward, another woman’s engagement ring clutched in his furious hand. Another woman who was likely just as heartless as his Alexia. When Adam gave his rib to Eve, Mike thought, breaking into the chill of the evening, the poor schmuck hadn’t realized the woman had plans to barbeque it!

Carrie let out a shriek as water barreled forth and a man emerged from the center of the pool.

He shook out his honey blonde head then paddled over to the side where Carrie stood.

“Lose something?” he asked, as Carried back up a step.

Carrie raised a mortified hand to her check and stroked back

hot tears. “Where on earth did you come from?” she demanded of this Poseidon-like god, whose eyes, she noticed, were as green as the Caribbean sea. Though she didn’t know why she’d noticed, or -- more importantly -- why she particularly cared.

“I came from the bottom of the pool,” he said, his tone not the least bit friendly. “Where I ran into a little something that might just be yours.”

With that, he pulled his right hand out of the water and gingerly steadied Carrie’s engagement between his thumb and forefinger.

Despite his hostile tone, Carrie grudgingly admitted that this pool nymph was actually quite attractive. Alarmingly attractive, in a way that would make most women swoon. But not Carrie, she told herself, backing up another step. Attractive meant trouble, and, in the last four hours, Carrie St. John had endured enough trouble to last a lifetime.

Well, that was one way to look at it, Mike thought, shifting his gaze between the ring pinched in his fingers and the enigmatic woman on the pool deck.

She was dressed in a summer sundress, wavy brown hair flowing to her shoulders. Her eyes, he thought, were just as dark. Although from this angle it was pretty hard to tell.

Mike braced himself on his arms as he rose from the water.

“Don’t think so,” he told her, lightly shaking off and extending his hand, palm-up, in her direction.

“Excuse me?” she asked, trying her best to look indignant. There was a little pout to her mouth that looked almost appealing. Almost, Mike reminded himself, not quite. Brunettes, in general, meant trouble. And Alexia had taught him that trouble not only hurt like the dickens, it was darned expensive too.

“You have a lot of nerve...” she said, setting her chin. Yep, Mike told himself, they were definitely brown. Chocolate brown eyes that could probably look enticingly warm were they not so heated with vehemence. “...intruding on my private moment!”

Mike laughed. “Intruding? But, I was here first!”

She shuffled sandaled feet beneath the low hemline of her dress. Feet that were attached, Mike couldn’t help but notice, to two very well-formed feminine ankles. “Well, if you were, I certainly didn’t see...”

Mike arched both his eyebrows and she stopped. By the way her appreciative eyes had traveled from his damp pecks to his naval, sure as heck looked to Mike like she’d been seeing something.

Mike walked forward and lifted a balled up fist from the woman’s side. “Here,” he said, prying her fingers loose as she looked on with incredulity.

Mike pressed the ring into her palm. “Someone spent hard-earned money for that. Don’t think it’s very good of you to go throwing it away.”

Carrie glared at the insolent man, wondering how he’d known exactly what she’d been doing. More puzzled still at how he dared intrude on her life. “Don’t think it’s very good of you to go telling a complete stranger how to run her affairs!”

“Oh, so it was only an affair, was it?” he asked, with a cool sheen to his evergreen eyes. Eyes that Carrie was quite certain could look enticing under different circumstances. “Somehow I imagined it was a heck of a lot more serious than that.”

“Well, maybe,” she said, flipping over his wrist and cramming the ring back into his hand. “You ought to think of something better to do with your over-active imagination than torment women you don’t even know.”

Carrie turned her back on him and started toward the inn. Of all the indignities. To be trounced upon by one man during dinner, then have a hunky dish like this one serve up insults for dessert.

“Hang on!” he called, hurrying to catch up with her. “Your ring!”

“Finders, keepers,” she said, picking up her pace. But what Carrie most desperately didn’t want to find herself doing was falling for another man. Especially one who looked like that in a pair of swim trunks -- all six foot something of virile man, dripping wet... Crimminy! Carrie scurried up the cold stone steps to the main building’s front door. The flame was barely extinguished on her relationship with Wilson and here she was already playing with matches!

Carrie struggled against the notion of turning back toward her predator, but knew he stood silently watching her at the bottom of those stairs. Silently -- rugged, handsome, yes darn it, handsome. And wet. Carrie’s throat went dry at that last thought.

“What?” she asked, spinning abruptly on her heels. “What in the world are you staring at?”

But Mike, who truthfully didn’t know, just stood there dumbfounded with this beautiful stranger’s ring in his hand. Beautiful, indeed. There was a fine sweep of color that just dusted her cheek bones, and somehow -- given all the crying she’d apparently been doing -- Mike didn’t imagine it was the magic of makeup. No, there was something much more powerful going on here. Something that made absolutely zero sense. And, for a lunatic instant, Mike found himself wishing he hadn’t wasted his heartfelt offering on Alexia but had given it to this goddess instead. Lunatic, was right. Mike gazed up at the powdery quarter moon threading star dust through the trees, deciding he’d been out in the night air too long.

But whether he was crazy or not, Mike knew one thing and one thing only. Before she disappeared into the inn, and perhaps for eternity, he had to get her name.

“I was just wondering,” he began tentatively, feeling the heat expand from his temples to the tops of his ears. “What your name is."

Holy Christ. He was insane! Alexia’s ring was still at the bottom of the pool, and here he was...what? Making eyes at another woman who’d just now broken some Romeo’s heart?

“Why?” she asked, holding court at the top of the stairs, but not looking half as menacing as she apparently intended.

“Just in case the law comes after me for stealing your ring,” Mike raced in, thinking quickly. He gave her his best smile but found it impossible to tell whether she was charmed by it or not.

“Mike,” she said, clearing her throat, and averting her eyes from his naked upper torso, which he’d noticed her perusing just the same. “You can rest assured, I won’t be calling the police on you any time soon.”

“Ah, so you do admit the ring was yours, after all.”

Her eyes flashed as she turned and headed through the door.

Conniving male! They were all the same, every last one of them. And what, pray tell, did this dripping hunk of flesh plan to do with that information? Blackmail her? As if the entire world wouldn’t find out soon enough. With Carrie’s luck it would make the morning edition.

emotion onto the bed. Her life couldn’t possibly get any worse! First, Wilson brings her all way here, to this gorgeous historic home -- to tell her he’s fallen in love with another woman. Then he leaves her, more like deserts her, in this love nest built for two and has the gall to tell her to enjoy the rest of the weekend. His treat.

Carrie pressed her palms to her forehead to ward off her ensuing headache. But knew that it would come regardless. This was stress with a capital “S”! She’d been such a fool, had already invited six women to be her bridesmaids! And now, she’d have to call each one and confess her misfortune.

And what was worse, what would truly be the worst part of all of it would be in facing her match-making grandmother. The grandmother Carrie had finally managed to convince she’d found a dashing bachelor to make “an honest woman” of her.

Carrie rolled over on the bed and clutched her pillow to her streaming cheeks. One time, Okay. But this was the second disaster she’d endured at the near-alter. What was it about her, Carrie wondered, that made men want to cut and run? Or worse still, rush straight into another woman’s arms? Carrie had actually seen Teresa, knew exactly who the woman was. And though as a fellow stockbroker of Wilson’s she certainly shared Wilson’s business savvy, Carrie truthfully didn’t find Teresa that much to look at.