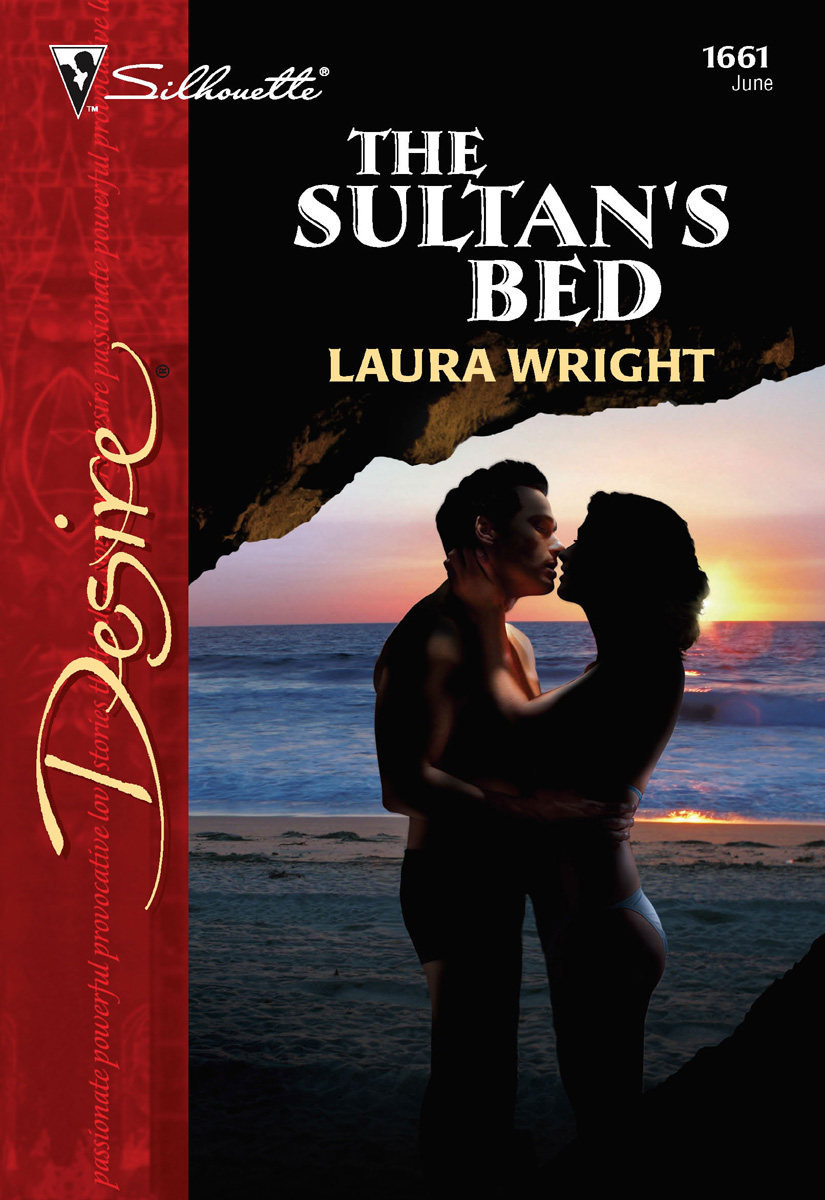 He Had Only Two Days Left With Her.

Zayad's gut clenched. He was a fool, but he did not want her to know who he was. For the first time in his life, someone was not aware of his role, his fortune, his title. Mariah cared for him as a man, not a prince. And for that, he would always be in her debt. Starting with her court case.

He turned, and his body went rock hard, fast. There she stood, moonlight at her back, draped in a thin white cotton tank and little white cotton shorts. She looked ready for bed, not for dinner.

But then again, he mused as he walked to her, he could always be persuaded to eat dessert first.

Thank you for choosing Silhouette Desire, where this month we have six fabulous novels for you to enjoy. We start things off with
Estate Affair
by Sara Orwig, the latest installment of the continuing DYNASTIES: THE ASHTONS series. In this upstairs/downstairs-themed story, the Ashtons' maid falls for an Ashton son and all sorts of scandal follows. And in Maureen Child's
Whatever Reilly Wants
â¦, the second title in the THREE-WAY WAGER series, a sexy marine gets an unexpected surprise when he falls for his suddenly transformed gal pal.

Susan Crosby concludes her BEHIND CLOSED DOORS series with
Secrets of Paternity
. The secret baby in this book just happens to be eighteen years oldâ¦. Hmm, there's quite the story behind that revelation. The wonderful Emilie Rose presents
Scandalous Passion,
a sultry tale of a woman desperate to get back some steamy photos from her past lover. Of course, he has a price for returning those pictures, but it's not money he's after.
The Sultan's Bed,
by Laura Wright, continues the tales of her sheikh heroes with an enigmatic male who is searching for his missing sister and finds a startling attraction to her lovely neighbor. And finally, what was supposed to be just an elevator ride turns into a very passionate encounter, in
Blame It on the Blackout
by Heidi Betts.

Sit back and enjoy all of the smart, sensual stories Silhouette Desire has to offer.

has spent most of her life immersed in the world of acting, singing and competitive ballroom dancing. But when she started writing romance, she knew she'd found the true desire of her heart! Although born and raised in Minneapolis, Laura has also lived in New York City, Milwaukee and Columbus, Ohio. Currently she is happy to have set down her bags and made Los Angeles her home. And a blissful home it isâone that she shares with her theatrical production manager husband, Daniel, and three spoiled dogs. During those few hours of downtime from her beloved writing, Laura enjoys going to art galleries and movies, cooking for her hubby, walking in the woods, lazing around lakes, puttering in the kitchen and frolicking with her animals. Laura would love to hear from you. You can write to her at P.O. Box 5811, Sherman Oaks, CA 91413 or e-mail her at [email protected]

“O
ur father sired another child.”

With those words Zayad Al-Nayhal, Sultan of Emand, executed a perfect rotation and plunged his sword into his imaginary target's chest. When he pulled back, he fought to keep his footing on the smooth stones of the large terrace that spanned the entire third floor of his palace. His arms were tight, his body exhausted and he could plainly see that his right hand bled.

It was no wonder after three and one-half hours of exercise.

Last night he had received a letter from his father's aide, a man who had passed away quietly just one week ago. The letter had been delivered by the aide's son and had contained a confession of such emotional intensity,
Zayad immediately had called his brother and asked him to come home. Knowing nothing but the agitation in his brother's voice, Sakir had agreed and been en route within the hour.

Through the night, Zayad had attempted to sleep. But that had been a fool's endeavor. At two-thirty in the morning he had escaped his empty bed and his cold silk sheets and made his way to the terrace, prepared to wield his sword, to sweat and to await his brother.

Zayad returned to the present, heard the palace bustle with activity on the floors below, and nodded at the four servants who stood in readiness at opposite ends of the terrace. Beyond the palace walls the sun was slowly creeping its way across the desert, eager to plant itself firmly on the horizon.

It was daybreak, and his brother was finally here.

Swathed in a backdrop of stone balconies, terra-cotta silk curtains and golden domes that stretched high into the blue sky, Sakir Al-Nayhal stood tall, his arms crossed at his chest, a frown tugging at his full mouth. “You have done many things to get me back to Emand, but creating this storyâ”

His sword at his side, Zayad shook his head. “This is no story, brother.”

“I do not believe you,” Sakir returned. “I have left a beautiful pregnant wife because you sounded as thoughâ”

“As though there were an emergency?” Zayad lifted his eyebrow.

“Yes. And I find you here trifling with your sword.”

His eyes fixed on his brother, Zayad steered the tip of his blade toward a small round table situated beside
a man-made waterfall and a hundred flowering plants. On the table was a gold tray containing Zayad's uneaten breakfast. And beside the plate sat a two-page letter, its thin edges flickering in the warm breeze. “Draka wrote that letter to me before he died. What he has to say is quite extraordinary and of such import that I thought it wise to take you from Rita.”

Sakir stared at the letter but made no move to pick it up. “What does it say?”

“It states that twenty-six years ago our father traveled to America to meet with the two senators of California on modern oil-drilling practices.” His lips thinned with irritation. “There he met a woman.”

Sakir's brows knit together. “A woman?”

“She was a young aide who worked for one of the senators. It seems that our father was instantly captivated by her beauty and spirit. He asked her to take a meal with him that night, and she accepted. After dinner they took a long drive up the coastâ” he paused, inhaled deeply “âthen she invited him to her home.”

It was a moment before Sakir spoke, but his eyes glittered with bewilderment. “This is very hard for me to believe. Our father detested Americans.”

“I thought so, as well, but Draka says that the sultan told him that this woman was different.”

For the second time in twenty-four hours, anger inched its way into Zayad's blood, and he hated himself for it. He was no romantic. He did not believe in true love, at least for himself. He understood the ways of men in his positionâeven married men. But his father had been different. Or so Zayad had thought. The Sultan had never taken another woman to his bed. Only
his wife. He had always claimed his love for Zayad's mother was true and without competition and that the old ways had not, and would not, claim him.

“How long was our father in America?” Sakir asked.

“And his nights were spent with this woman?”

“It would appear so.”

“You spoke of a child,” Sakir said, his jaw tight.

“One month after the sultan returned to Emand, the woman contacted Draka.”

“And?” Sakir prompted when Zayad paused.

“She claimed she was with child. She claimed the sultan was her child's father. She wished to speak with him, to tell him of this news.”

“And what did our father say to her?”

Zayad walked to the balcony, searched for calm in the rugged landscape, the desert floor and the mountains beyond. “Draka did not tell our father of her call or her news.”

“Draka did not believe that the woman was speaking the truth.”

“Yes, but an investigation should have been made.”

“Of course it should have.” Zayad's gaze fell to the acres of lush garden that held fruit trees and herbs, but more importantly, held the grave of his youngest brother, Hassan. The boy had died many years ago in a military training accident, and for Zayad, grief still spread through his bones every time he thought about losing his brother.

Butterflies flew and fed at the red and purple flowers by Hassan's grave-site. A reminder that his spirit re
mained, yet would always be able to fly free. Zayad knew in that moment that even if there was the smallest possibility that he and Sakir had another sibling, he had to pursue it.

“What are you thinking, brother?” Sakir asked.

Zayad turned, his back to his beloved land. “This is a personal matter, a family matter, but one that needs to be addressed. I am thinking that at long last an investigation will be made.”

Sakir nodded. “Yes. We will find this child.”

“As you said, brother, you have a beautiful pregnant wife at home who needs you. You cannot be away from her for longer than a few days. I feel selfish in taking you away for that long, but I was convinced a phone call would not do here.”

“And I am right about you going home and staying there with your Rita.”

Sakir's mouth formed a grim line, but he nodded. “The child's DNA must be tested.”

“It will be. But, Sakir, you understand that this is no child. Not anymore.”

“Of course. He must be a full-grown man by now.”

With a quick flick of his wrist Zayad stabbed at the letter with the tip of his sword, piercing the paper. He thrust it at his brother. “Read the last paragraph.”

Sakir slipped the paper from the blade and read.

With curious eyes Zayad watched his brother, watched as his face turned from interest to unease to shock.

When Sakir finally looked up, his green eyes were wide. “A girl?”

“Yes.” Zayad had been just as stunned when he had read this. After three men of Al-Nayhal, the thought of a girl child born to his father hadn't occurred to Zayad.

“Where is she?” Sakir asked.

Walking over to the table, Zayad grasped the glass of plum juice from his tray and drained it. “She lives in a town one hour from Los Angeles, California. It is called Ventura.”

“When do you leave?”

“Tomorrow morning. My investigation is already under way. I must have more information on this woman and her life before I leave, before I attempt to get close to her. I will fly with you to the States, then continue on to California.”

“I will live as an American, get to know this Jane Hefner, see if she is truly an Al-Nayhal, see if she is capable of knowing and accepting her truth.”

“You will keep me updated, yes?”

“Of course.” Zayad motioned for a servant to come and remove his breakfast tray and for another to take his sword. They were swift in their tasks, and soon Zayad and Sakir were heading inside the palace.

Sakir stopped at the doorway to the ballroom, turned to Zayad and grinned. “We could have a sister.”

Not sharing his brother's enthusiasm, Zayad continued walking down the marble hallway. “Do not get your hopes up just yet, Sakir. We could have a sister. But we also could have an impostor.”

Julia by Peter Straub
Starlight by Isadora Rose, Kate Monroe
Roosevelt by James MacGregor Burns
Death Row by William Bernhardt
A Girl in Wartime by Maggie Ford
Jack of Ravens by Mark Chadbourn
Mujeres sin pareja by George Gissing
War Against the Mafia by Don Pendleton
Breeder by Cara Bristol
With Every Breath (Sea Swept #2) by Chase, Valerie
Our partner