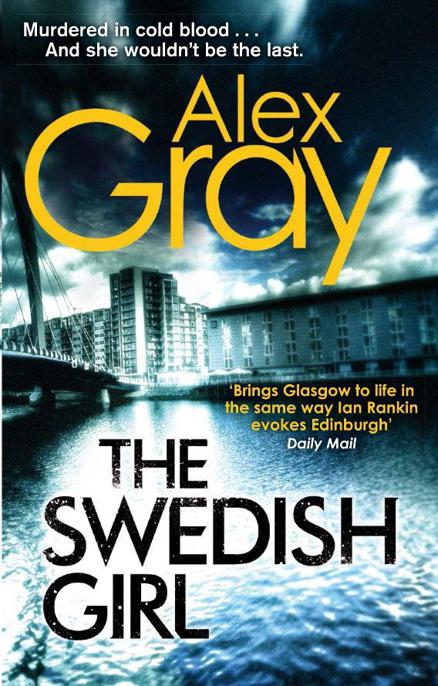 Alex Gray was born and educated in Glasgow. She is the co-founder of the Bloody Scotland Crime Writing Festival, has been awarded the Scottish Association of Writers’ Constable and Pitlochry trophies for her crime writing, and is the Scottish Chapter convenor for the Crime Writers’ Association. Married with a son and daughter, she now writes full time. Find out more at
www.Alex-Gray.com
.

Five Ways to Kill a Man

A Pound of Flesh

This book is dedicated to June and George with love

Yet each man kills the thing he loves

By each let this be heard,

Some do it with a bitter look,

Some with a flattering word,

The coward does it with a kiss,

The brave man with a sword!

Some kill their love when they are young,

And some when they are old;

Some strangle with the hands of Lust,

Some with the hands of Gold:

The kindest use a knife because

The dead so soon grow cold.

Taken from
‘The Ballad of Reading Gaol’
by Oscar Wilde

T
he old man grasped the head of his walking stick, feeling its curve snug within his palm. A glance at his hands might have revealed the yellowing knuckle joints and dark, mottled skin, the fingertips stained ochre from years of rolling his own cigarettes: signs of old age and decay along with the necessary stick. With his free hand he pulled open the green-painted door of the close, letting it fall shut with a slam behind him. For a moment he paused in the shadows of twin hedges that flanked the pathway, fingers fumbling the buttons of his jacket. Then, turning into the street, he blinked, dimly aware of the lamps beginning to glow with a faint amber light against the deepening blue.

Twilight was not his favourite time of day. The setting sun was a glare against the lenses of his thick spectacles, any peripheral vision merely grey-hued shapes leering at him from the buildings on either side. Yet he had to be out; had to make this slow journey from his home to the corner of the street.

Earlier, an insistent voice had made him put on his raincoat, wrench the walking stick out from its place in the hall stand and make his painful way down several flights of stone stairs leading to the street. That same voice had made him swallow down a thin line of phlegm, making him feel the dryness in his throat, inviting him to slake this nightly thirst. It was a voice he always obeyed.

The sound of laughter made him falter for a moment and look up. They were there again, those young hooligans from across the landing, sitting outside the pub as if they owned the place. And, although it was not a summer’s evening, he saw that the girls were clad in skimpy blouses, the young men sitting hunched towards them, wavering lines of smoke rising from their cigarettes. He would have to pass them in order to reach the pub door, make a detour around the table and chairs that cluttered up the pavement. For a moment he wanted to raise his stick and shout curses at them, tell them to clear off, but instead he lowered his eyes and shuffled past, hoping they might leave him in peace.

As he passed them he could hear whispers, but not the whispered words. Then more laughter, raucous laughter like crows squawking above a rubbish tip, the sound of it following him around the corner and on to the threshold of the Caledonian Bar. He could feel his heart thumping and, as he imagined their eyes turned to watch him enter the pub, the blood flushed his cheeks into angry spots of colour. But then the loud beat of music from an unseen source drowned out everything as he peered into the gloom, searching for a vacant seat. Even before he took his customary place in the corner the barman was pulling his first pint.

‘There, Mr McCubbin. A wee packet of crisps as well, eh?’ Ina, the barmaid with the purple hair, was smiling down at him, laying his pint mug carefully on the paper mat. ‘What d’you fancy the night? We’ve got in some nice ham-flavoured ones,’ she went on, shaking her head as the old man chose to ignore her, lifting the glass to his lips and drinking deeply.

‘The captain’s in one of his moods,’ Ina remarked sourly to Tam, the barman, who merely nodded at the old sailor and directed his glance at the next customer with a tilt of his chin that served as a question.

Derek McCubbin sat still, his back to the window, listening to the familiar jangle from the taped music, sighing into the night as distant images from seafaring days long gone flitted across his vision. For it was more than a mere physical thirst that drove him here night after night; the drink helped him to forget his age and infirmities, old memories smothering this present wretchedness, memories that could almost make his bitter lips twist into the grimace of a smile. They would replenish his glass a few more times during the evening before the old man made his way back along the street, tapping his stick against the cold hard stones.

Outside the pub Kirsty Wilson shivered.

‘Want to go in?’ the other girl asked her, running her fingers down Kirsty’s bare arm, making goose bumps appear along her friend’s skin.

‘Och, it’s just that old man across from our flat,’ Kirsty replied. ‘Gives me the creeps.’

Eva Magnusson took her hand away, reaching up instead to smooth her own fine blond hair as the wind began to blow the dust around their feet. ‘Thought you were cold,’ she remarked.

‘You feart of Mr McCubbin?’ the big red-haired boy opposite them laughed suddenly, stubbing out his cigarette on the metal ashtray. ‘He couldnae hurt a fly, that old codger.’

Kirsty wriggled uncomfortably. Rodge was right, of course. The old man was just that: an old man who didn’t see too well and who needed a stick to amble along the street every night.

‘You shouldnae be like that, Kirsty,’ another of the boys protested mildly. ‘D’you not feel sorry for him, all on his own like that?’

‘Och, he’s probably got other old men he meets in the pub every night,’ Kirsty said, sensing an argument beginning and knowing she was going to be worse off if she didn’t capitulate right away.

Colin shook his head, pressing home his point. ‘He’s always on his own. I’ve seen him,’ he added thoughtfully.

‘Poor old Daddy No Mates!’ Eva pulled a face then laughed and the others laughed with her as they always did.

Kirsty sighed quietly. Eva was the acknowledged favourite of their group whom everybody adored. Even the girls from uni didn’t bother trying to compete with her because what was the point? Colin, Gary and Rodge pretended that they were cool about living in the same flat as Eva Magnusson but Kirsty knew fine that any one of the three would hop into bed with Eva given half a chance. Especially Gary, she thought, watching the dark-haired English lad narrowing his eyes as he smiled over his glass. Colin and Rodge weren’t Eva’s type at all: Rodge was like a great bear, more at home on the rugby pitch than in the classroom. Or the bedroom, come to that, she grimaced, remembering a recent drunken night that neither of them ever spoke about. And Colin Young was just too nice for a girl like Eva Magnusson; too nice and too normal.
The boy next door
, Eva had called him once when the two girls had been discussing the lads, and she had made it sound like a sort of insult. No, Kirsty told herself, that wasn’t fair. Eva was never unkind about anyone; that was what was so endearing – and maddening – about her. You might envy her Scandinavian blue eyes and silvery blond hair but you simply couldn’t dislike her.

‘You’ve just got a suspicious mind, Kirsty,’ Gary told her. ‘Like your old man.’

‘Aye, well, maybe,’ Kirsty agreed. Having a dad in the police force was what had swung it for her in getting a place in Eva’s flat, she was sure of that. Mr Magnusson had been well impressed when she’d told him that her father was a detective sergeant in Strathclyde Police.

‘Ever think of joining him?’ Rodge asked. ‘Not a bad job for a lassie nowadays.’

‘No.’ Kirsty shook her head. ‘I’m more like my mum. Definitely going to be in the hospitality business. Preferably somewhere warm.’ She shivered again and looked up at the darkening clouds.

‘You should be your own person, Kirsty!’ Eva said suddenly. ‘Don’t let your parents dictate your life for you.’

‘Aye, you get a wee place on the Med and we’ll all come for holidays,’ Colin joked, glancing from one girl to the other, eyebrows raised in surprise. But the Swedish girl’s smile was back almost at once, her sweet expression belying the vehemence with which she had spoken.

‘Come on, let’s go back to the flat,’ Eva said, getting up and looking for the pink cardigan that had slipped off the back of her chair and was lying on the ground.

‘Here.’ Colin scooped it up and wrapped it around her shoulders, a simple gesture that would have impressed Kirsty but that Eva only acknowledged with a faint smile as though it were her due.

‘Five go to Merryfield Avenue,’ Colin murmured as he fell into step with Kirsty, Eva and the others already several paces ahead of them.

Kirsty looked at him sharply. Did he think they were kids playing some sort of a game? Well, if that’s what he really thought, he was happy enough to take part in it, wasn’t he? Or was his remark directed more towards Eva? Kirsty followed her flatmate’s wistful gaze. There was no doubt in her mind that Colin Young was well and truly smitten and for a moment she felt sorry for him.

‘C’mon,’ she said, linking her arm in his. ‘I’ll stick the kettle on and make us all a cuppa. Okay?’

Colin grinned at her suddenly. ‘Know what, Kirsty Wilson? You’re going to make someone a great wee wife one of these days.’