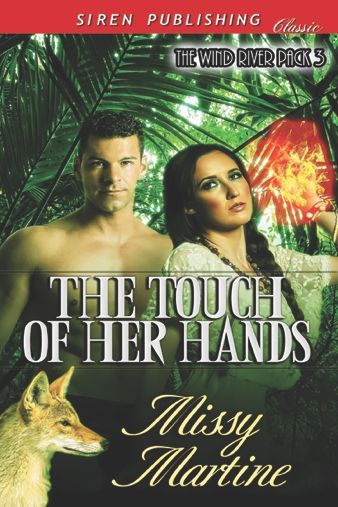 The Touch of Her Hands

Aurelia Salazar has a special gift the government wants to know more about. She can heal with just the touch of her hands. For five years they kept her hidden away while they studied her. And then two brave Marines helped her escape and smuggled her out of the country.

When some of the children of the Wind River Pack become ill, Zack remembers the young girl and her unique abilities. He goes to South America to find her and bring her back so she can help. He doesn’t expect to find she’s his mate.

Now, they’re racing against the clock to get her back to the States before it’s too late for the children. But Zack isn’t the only one searching for her. What happens when the scientist that held her prisoner for all those years finds them?

If you have purchased this copy of
The Touch of Her Hands
by Missy Martine from BookStrand.com or its official distributors, thank you. Also, thank you for not sharing your copy of this book.

This is Missy Martine’s livelihood. It’s fair and simple. Please respect Ms. Martine’s right to earn a living from her work.

To my fans, who wrote me so many kind letters about my first series, A Wolfen Heritage. You made me want to carry on with the main characters.

To the kind people at Siren-BookStrand who provide such good support to me as I grow as a writer.

And to my husband, who is still, by far, my greatest fan.

PFC Zack Wind River hunkered down in his regulation Tanker jacket and made his way into the narrow alley. The December winds were bitingly cold. If they’d told him a year ago, he’d be walking guard duty outside a broken down old building in Idaho, he never would have enlisted in the Marines. He’d been desperate to get out and make some kind of place for himself in the world.

He was abandoned when he was just a pup, and nobody had wanted to take in a baby coyote-shifter. The powers-that-be had sent him to one of the National Council’s homes for children where he was in competition with a few dozen other boys for food, clothing, and affection. He’d resigned himself to his miserable life when Kitania Wind River marched into the facility. She, along with her two mates, had promptly adopted five of the orphaned boys. They’d been good to him, but he’d always known something was missing from his life.

That was what led him to the Marine recruiter. He’d thought he would travel to exotic places, have some adventures, and maybe even see a little action to help burn off his aggression. So far, the only action he’d seen was the night life of San Diego during basic training. And, since one didn’t get a lot of free time in boot camp, he hadn’t seen much action at all.

Pulling his coat tighter around his shoulders, Zack growled softly. He still didn’t understand the importance of guarding the old building on the outskirts of Moyle Springs. Hell, the entire town only consisted of around eight hundred people. What could be so important that they needed a military guard in Idaho?

He glanced up at the sound of the trash bin lid crashing down. Not only were the winds cold, they were fierce. The only upside, he hadn’t needed to discourage any homeless people from camping out behind the dumpsters. With the subzero temps, they wouldn’t have lasted the night. He tensed when a shadow passed across the alley’s entrance, and then relaxed when he recognized the bundled up Marine. “What the hell are you doing out here, Medina?” PFC Alvara Medina was one of the six men on his present assignment. They were divided into two groups. One of the groups patrolled inside the building and the other around the perimeter.

“Just getting some air before dinner.” Alvara frowned, rubbing his hands together. “I thought Raulston had this shift.”

Zack snorted. “He overindulged, while he was still on duty, and the captain wrote him up. There wasn’t time for him to sober up before this shift, so he switched with me.” He took a step toward Medina when a look of panic washed over his face. “Are you okay? Is something wrong?”

Alvara glanced around, even looked over his shoulder, and then returned his gaze to Zack. “No, nothing’s wrong. You on until midnight?”

Zack nodded. “Yeah, I got the cold shift.”

Alvara chuckled and wrapped his arms around his body. “Well, I gotta go. I wanna get some chow and take a shower before I have to report. I’ve got the late watch inside tonight. Have a safe shift.”

“Sure, man. Take care.” Zack watched as PFC Medina hurried around to the front of the building. “This assignment is making everybody crazy.” Patting the handle of his sidearm, he left the alley and made his way around the back of the building. “It’s gonna be a long, cold night.”

Davidson returned his salute. “Everything’s quiet, Private. The prisoner had her dinner and the tray was removed 1800 hours. She should be down for the night. You have my number if you have any problems.”

Alvara watched him leave and then released the breath he’d been holding. It was risky to push up the timetable on his plan, but he didn’t have any choice. He’d overheard his superiors making plans to move the prisoner, and there was no guarantee he’d be transferred with her. Besides, he’d promised the girl he’d find a way to help her escape. He’d made all the arrangements. His cousin was hiding out in the woods nearby, ready to transport the girl far away from her cold prison. He’d have to hope that Private Wind River wouldn’t have the heart to turn them in.

Hell, she was only fourteen years old. What they were doing wasn’t right. No matter what kind of abilities the young girl had, they didn’t have the right to take away her freedom. Keeping his senses alert, he made his way down to her cell and opened the observation panel on the door. She appeared to be sleeping. “Aurelia,” he whispered. “Are you awake?”

She threw the covers back and rolled off the small cot. “Yes, I remembered, Alvara.” He had warned her that they were drugging her dessert every night in order to do some of the tests the doctors ordered. “I hid the cake in the covers and flushed it down the toilet after they took my tray. I’m fully awake tonight.” She moved to the door and gazed up at him with longing in her eyes. “Are we gonna leave tonight?”

Alvara unlocked the door and pulled it open. “Yes, child, we’re getting you out of here tonight.” She threw herself into his arms, weeping. He rubbed the back of her head and patted her back awkwardly. “Let’s go over this one more time, Aurelia.”

She nodded and wiped the tears from her face with the back of her hand. “I’m listening.”