Read The Ultimate History of Video Games: From Pong to Pokémon and Beyond—The Story Behind the Craze That Touched Our Lives and Changed the World Online

The Ultimate History of Video Games: From Pong to Pokémon and Beyond—The Story Behind the Craze That Touched Our Lives and Changed the World

BOOK: The Ultimate History of Video Games: From Pong to Pokémon and Beyond—The Story Behind the Craze That Touched Our Lives and Changed the World
6.56Mb size Format: txt, pdf, ePub
Read Book Download Book
ads 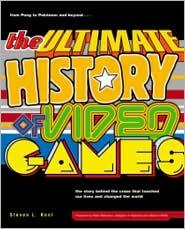 Praise for
The Ultimate History of Video Games

“This book is extraordinary, with enough quotes, anecdotes, and detail that it reads more like a fast-moving novel than a literary tome.”

“In the game industry, like in movies, an incredible amount happens behind the scenes. This book tells it all.”

“From the advent of coin-op video games, through its transition to the consumer video games industry,
The Ultimate History of Video Games
tells it as it is. An enjoyably informative bird’s-eye view of this entertainment medium.”

“
The Ultimate History of Video Games
is the definitive history of computer and video games. Steven Kent takes readers from the arcade to the boardroom and introduces them to the men and women who have transformed gaming from a garage hobby into the current multibillion dollar industry of technology entertainment for the new millennium.”

—Arthur Pober, president of the Entertainment Software Rating Board

“A great history of the video game industry! Steve Kent reports the inside story!”

—Howard Lincoln, former chairman of Nintendo of America, CEO of the Seattle Mariners

“A must read for newcomers and veterans alike.”

“Apart from the fact that Steve Kent is one of the big authorities on this thing we call the video game, he can also make history fun.”

“I certainly wasn’t prepared for the engrossing, almost novel-like work that I discovered when I read
The Ultimate History of Video Games.
It was quite a pleasant surprise.”

“The book reads like a text version of one of those mammoth Ken Burns documentaries, but without all the weird and pretentious poetry. The book leaves very few historical stones unturned.”

“You’d be hard pressed to find a better book about the history of video games. In fact, you can’t. It really is quite an engaging read. And you’ll find yourself rereading sections for years to come.”

“Steve Kent has created a more compelling version of gaming history, one that relies heavily on anecdotes from the heavyweights of the gaming industry.”

“A thing of precious value. Kent’s supremely exhaustive research ensures that nuggets of insight into what went on behind the scenes leap from nearly every page. Read this book now or forever be an unenlightened gamehead.”

—Lenny Herman, author of
Phoenix: The Fall and Rise of Video Games

“Incredible insight into the creation of some of the biggest video games. Having been in this business for fourteen years, I was amazed by the amount of information and only wish the book could have been longer.”

“I found this book fascinating to read. Besides reliving the stories about the people and the games, it goes into the inside stories and politics of the video games industry.”

“A nostalgic, sweeping trip down memory brick road,
The Ultimate History of Video Games
is great for people who want to learn more about the early days of video games.” 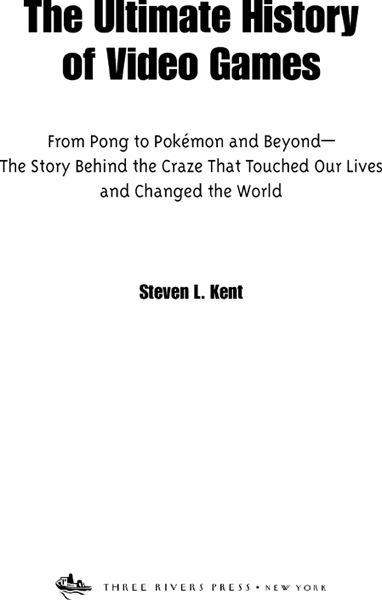 To Professor Alf Pratte, that rare individual
who understands the full responsibilities of journalism and teaching.

Chapter   1
The World Before Pong

Chapter   3
Father of the Industry

Chapter   4
And Then There Was Pong

Chapter   5
The King and Court

Chapter   7
“Could You Repeat That Two More Times?”

Chapter   9
The Return of Bushnell

Chapter 12
The Battle for the Home

Chapter 13
A Case of Two Gorillas

Chapter 17
We Tried to Keep from Laughing

Chapter 18
The Seeds of Competition

Chapter 19
The Birth of Sega

Chapter 22
The Year of Hardware

Chapter 23
Run for the Money

Chapter 28
The Mainstream and All Its Perils

Chapter 29
And the Cycle Continues

Chapter 30
Three Horses and a Pony

W
hen Steven Kent asked me to write the foreword to this book, I was deeply honored and rather pleased. I then started to wonder what I would write! These feelings made me realize that what is so useful about this book is that is chronicles the beginnings of a new entertainment medium. Our industry’s greatest problem has been one of identity—where, culturally, do video games fit? They don’t fit into films, they don’t fit into books, they don’t fit into any existing pigeonhole. Twelve years ago, when I produced my first game, my greatest challenge was to try to get someone interested in it. After talking with Steven, I believe he has found a similar problem with placing this book. Thankfully, he persevered as I did.

However, now that we have this book, at last we have a faithful record on the cultural history of what I am sure will one day be one of the most important entertainment mediums in the world. It is shocking to me to open the first page and read through the first chapter and look back through the years of my life. Each chapter unveils a new episode in the history of computer games that coincides with my own history. What this highlights for me is that young people today think of computer games as a natural pastime, which was not always the case. They can’t imagine a world without computer games, and what Steven’s book does (and it is the first to do this) is set out the history of computer games that is both compelling and compulsive. I endorse and encourage you to read this excellent book.

I
n 1972, my physical education teacher took the class to a bowling alley in Kalihi, on the island of Oahu in Hawaii. As we walked past the familiar line of electromechanical games
(Night Bomber
was my favorite at the time), I noticed a game that seemed to be running on a television set or possibly a computer. My teacher sent the other kids off to bowl while he and I dropped a quarter into the machine and batted a square ball back and forth with rectangular paddles. Obviously, the game was
Pong.
One hour later, as the rest of the class finished bowling, I had a new addiction that has now lasted for nearly thirty years.

Four years later, I found myself playing Midway’s
Gunfight
with a friend named Ed when two of the best-looking girls from my high school class came up to talk with us. (As anyone who knew me in high school will tell you, that was not a common occurrence.) I really wanted to talk to them. Ed really wanted me to talk to them, too; but every time I looked away from the game, he shot me. In the end,
Gunfight
won out, and I had proven my absolute nerddom.

Researching this book gave me the opportunity to interview Dave Nutting, the man who modified
Gunfight
for the U.S. market, and Al Alcorn, the engineer who built the first
Pong
machine. In fact, writing this book has given me the chance to meet most of the people who entertained me, addicted me, and caused me to spend an evening with Ed when I might have had more fun with Lisa. What I found out about these people was that the vast majority of them are kind, smart, and generous. With the exceptions of three people—Sam Tramiel, Ken Kutaragi, and Hiroshi Yamauchi—all of the people I asked for interviews granted them and put up with the endless hours of repetitive questions. In fact, such busy and important men as Ralph Baer, Nolan Bushnell, Al Alcorn, Masaya Nakamura, Minoru Arakawa, Howard Lincoln, Tom Zito, and several others granted me multiple interviews.

In the end, much of this book was cobbled together from information that I gathered from more than 500 interviews. While I would like to thank the people who generously donated their time for these interviews, many of which were several hours long, I feel it is equally important to thank the many people who helped me arrange everything. For every interview that went into this book, there was an average of two PR/communications people working to put everything together.

While writing this book, I found myself using a few published sources as well. One was KLOV, the Killer List of Videogames, which is located at
www.klov.com
.
The people who created this amazing site do not receive advertising revenues and are not employed by the video game industry. They simply maintain this immense site out of love for the games.

I also relied heavily upon
Phoenix: The Fall and Rise of Videogames
, a brilliant book written by Leonard Herman. As I was finishing this book, a friend suggested that I call it “A Comprehensive History of Video Games.” I could not do that. Lenny had already written the comprehensive book.

BOOK: The Ultimate History of Video Games: From Pong to Pokémon and Beyond—The Story Behind the Craze That Touched Our Lives and Changed the World
6.56Mb size Format: txt, pdf, ePub
Read Book Download Book
ads

Spellbound: The Books of Elsewhere by Jacqueline West
Seducing the Regency Dom by Raven McAllan
Stockholm Syndrome 2- 17 Black and 29 Red by Richard Rider
Doctor in the House by Richard Gordon
Goodnight Tweetheart by Teresa Medeiros
Show Business Is Murder by Stuart M. Kaminsky
Giada at Home: Family Recipes From Italy and California by Laurentiis, Giada de
An Unintentional Affair (The Affair Series Book 1) by Randi Ocean
The Haunted Lady by Bill Kitson
Otherworld by Jared C. Wilson
Our partner