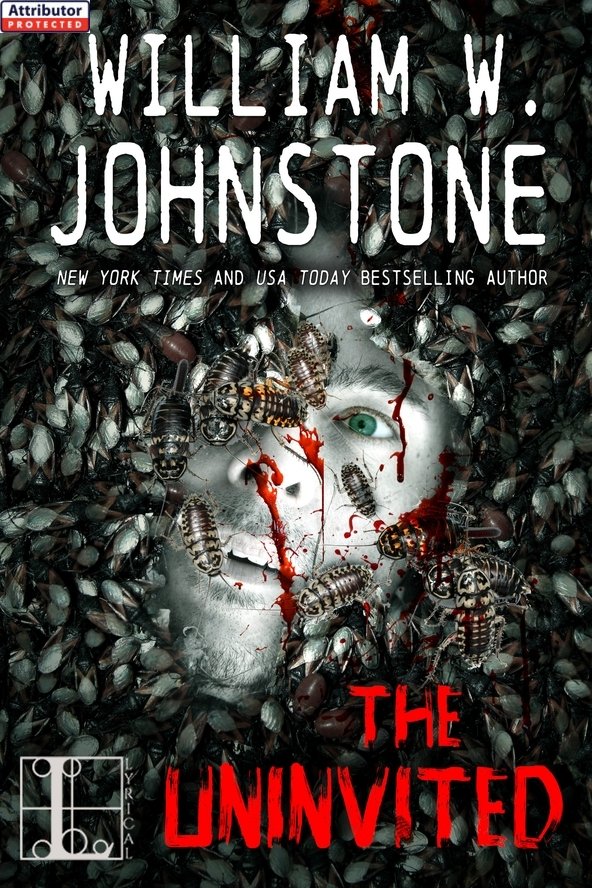 They ate everything warm-blooded that got in their way during the first massive march; cats, dogs, pigs, chickens, horses, and people. In their original form, much smaller, and much less aggressive, and with only mouthparts, they had been known to eat leather, soap, glue, wood, cloth, paper, and any food that man ate.
But these creatures were mutants, five inches longer and much heavier than even the
largest
of their species. And in a very primitive fashion, due to the change in their body chemistry from N-A-N-1-D, these mutants could reason and organize.
Moreover, their activity was accompanied by a distinct clicking sound, which might have been their means of communicating to each other. But their means of communicating to humans was quite different and would become more and more evidentâas they employed their teeth....
WILLIAM W. JOHNSTONE IS ZEBRA'S BESTSELLING MASTER OF THE MACABRE!
THE UNINVITED
Â (2258, $3.95)
A creeping, crawling horror had come to the small town of Lapeer Parish, Louisiana. Restless, unstoppable creatures, they descended upon the unsuspecting Southern community in droves, searching for grisly nourishmentâin need of human flesh!
Â
THE DEVIL'S CAT
Â (2091,$3.95)
They were everywhere. Thousands and thousands of cats in every shape and size. Watching . . . and waiting. Becancour was ripe with evil. And Sam, Nydia, and Little Sam had to stand alone against the forces of darkness, facing the ultimate predator!
Â
SWEET DREAMS
Â (1553, $3.50)
Only ten-year-old Heather could see the eerie spectral glow that was enveloping the townâthe lights of Hell itself! But no one had listened to her terrified screams. And now it was Heather's turn to feed the hungry, devouring spirit with her very soul!
Â
WOLFSBANE
Â (2019, $3.50)
For years Ducros Parish has been free of the evil, seductive scent of wolfsbane. But now tiny yellow buds are once again dotting the bayou. And when the wolfsbane blossoms in the springtime, an ancient, unspeakable horror will be back in full flower!
Â
THE NURSERY
Â (2072, $3.95)
Sixty-six unborn fetuses, they had been taken from their human mothers by force. Through their veins flowed the blood of evil; in their hearts sounded Satan's song. Now they would live forever under the rule of darkness . . . and terror!
Â
Available wherever paperbacks are sold, or order direct from the Publisher. Send cover price plus 50Â¢ per copy for mailing and handling to Zebra Books, Dept. 2258, 475 Park Avenue South, New York, N. Y. 10016. Residents of New York, New Jersey and Pennsylvania must include sales tax. DO NOT SEND CASH.
THE UNINVITED
BY WILLIAM W. JOHNSTONE

All copyrighted material within is Attributor Protected.
Table of Contents
WILLIAM W. JOHNSTONE IS ZEBRA'S BESTSELLING MASTER OF THE MACABRE!
Title Page
Prologue
Chapter One
Chapter Two
Chapter Three
Chapter Four
Chapter Five
Chapter Six
Chapter Seven
Chapter Eight
Chapter Nine
Chapter Ten
Chapter Eleven
Chapter Twelve
Chapter Thirteen
Chapter Fourteen
Chapter Fifteen
Epilogue
THE ULTIMATE IN SPINE-TINGLING TERROR FROM ZEBRA BOOKS!
A CAVALCADE OF TERROR FROM RUBY JEAN JENSEN!
HAUNTING TALES OF UNSPEAKABLE EVIL BY RICK HAUTALA!
Copyright Page
And much of Madness, and more of Sin,
And Horror the soul of the plot.
Poe
Prologue
The tractor-tanker rig rumbled through the early spring night, obeying the speed limit, obeying all laws of the road, taking it easy around the curves of the state road. The driver wanted this load to get through without any problems, without any close inspection.
The tanker wore the markings: WJS TRUCKING COMPANY, INC, Wichita, Kansas. But the company would exist only until this one run was concluded. Two men, from the office of Scientific Experimentation, would take turns manning the phone in the rented office in Wichita. Once the tanker was delivered to Charleston, South Carolina, and was safely lifted on to a waiting U.S. Navy freighter, the office in Wichita would close, the phone would be disconnected, and the two men would quietly leave town. The end of WJS Trucking Company, Inc.
Sloshing quietly about in the tanker was a chemical with the code designation: N-A-N-1-D. Nandy, for short. For a timeâa very brief timeâthe chemical was looked upon as a wonderful discovery in the secret labs of the experimentation station in Utah: a great boon to farmers. For Nandy would not only protect soybean plants from just about any pest, it could also be used as a fungicide. A truly marvelous discovery. Nandy was also ecologically safe, posing no threatâit was first thoughtâto mankind, animals, underground water sources, lakes, streams, rivers, or wells. Yes,
N-A-N-1-D
would, the scientists thought, be hailed as the greatest discovery of this century.
Then it was discovered that Nandy had a startling effect on one certain bug. Just one bug. Or rather, as it was later learned, one species of bug. This bug has been around for more than three million years. A living fossil, some say. Nandy not only produced hideous and grotesque mutations among this species, but also some dangerous side effects. One employee who was bitten by a mutant felt some unsettling changes in his body chemistry.
While this particular member of the insect family produced shudders and screams among both men and women since the beginning of time, it was never hostile toward humans. Until it started feeding on
N-A-N-1-D
.
Â
Â
Crossing the Velour River into Lapeer Parish, the rig hit a slick spot on the blacktop, slewed once, then banged into a bridge railing. The driver pulled off onto the shoulder and carefully inspected the tanker for damage. He found none. But the impact had jarred loose a nozzle cap on the underside of the tanker, allowing a trickle of liquid to spill from that compartment. As the rig bounced along the state road, through Lapeer Parish and very close to Baronne Parish's southernmost tip, more and more liquid spilled and splashed out, hundreds of gallons of the chemical
N-A-N-1-D
dribbling along the highway.
It was not until the driver crossed the bridge into Mississippi that he noticed the weight difference and pulled over. One entire compartment was empty. Two thousand gallons gone. In lab work, Nandy was mixed one part to fifty parts water. The government agentânot an experienced truck driverâalmost went into a panic. He knew fully well what he was hauling was so highly classified not even the President knew about it. When the chief of the experimentation station learned of Nandy's side effects, he ordered all work on the chemical halted and cautioned his people to be silent about it. Not one word must leak out; it would mean their jobs. And, especially, they mustn't say anything about those . . . unfortunate men who had died. The technicians understood; they'd been through this before, many times.
At a truck stop, the driver put in a frantic call to the men in Wichita.
After several moments of the most expert cussing the driver had ever heard, the agent calmed down and said, “Get the hell out of there and get on the road to Charleston. And for God's sake, Clint, be careful. Don't let anymore of that stuff spill. We've got to get that crap out of this country and out to sea to dump it.”
“But the people in those Parishes?”
“Goddamnit, Clint! Will you stop worrying? You know one of the drawbacks of that stuff was the conditions under which it had to be applied. Under sixty degrees and it had to rain within twenty-four hoursâand we were working on that problem until that damn bug popped up. Just don't get any of that stuff on bare skin, for Christ's sake. How's the weather down there?”
Clint stuck his head out of the phone booth and looked up at the sky. “Beautiful. Not a cloud in the sky. Very pleasant.”
“Then we've got nothing to worry about, do we? That stuff, in its pure form, doesn't last long. As long as it's over sixty degrees and doesn't start to rain, that stuff can't mist and float. How's the wind?”
“No wind.”
“Hell, it'll be dissipated in an hour or so. All gone. Those hayseeds in Louisiana will have the finest soybean crop in their history of farmingâbug free.”

You suppose we can have a share of the profits?” Clint asked.
Both men laughed.
Much relieved, Clint climbed back into his rig and pointed its nose east. Yes, he thought, looking out the side window, the radio blaring Waylon and Willie, it was a beautiful night. And he would be very happy when he stepped down from this rig in Charleston. He was also very happy that what had spilled was harmless. He whistled along with the music.
But early spring in Louisiana can be tricky, with wide variations in climate between Mississippi and Louisiana. In Baronne and Lapeer Parishes, it was 58 degrees and drizzling rain, the wind gusting to the north.
Soon, all over the Parishes, pockets of what looked to be fog began forming, a gray mist that floated and clung close to the rich earth, coating the land and everything on it. No one paid any attention to the mist. Who pays any attention to fog in Louisiana?

Landing by Emma Donoghue
Aster Wood and the Blackburn Son by J B Cantwell
Wakeworld by Kerry Schafer
Flight: New and Selected Poems by Linda Bierds
Brunelleschis Dome by Ross King
Eden's Garden by Juliet Greenwood
Yearning for Love by Toye Lawson Brown
The Devil's Fate by Massimo Russo
Mine: The Arrival by Brett Battles
Wicked Sense by Fabio Bueno
Our partner