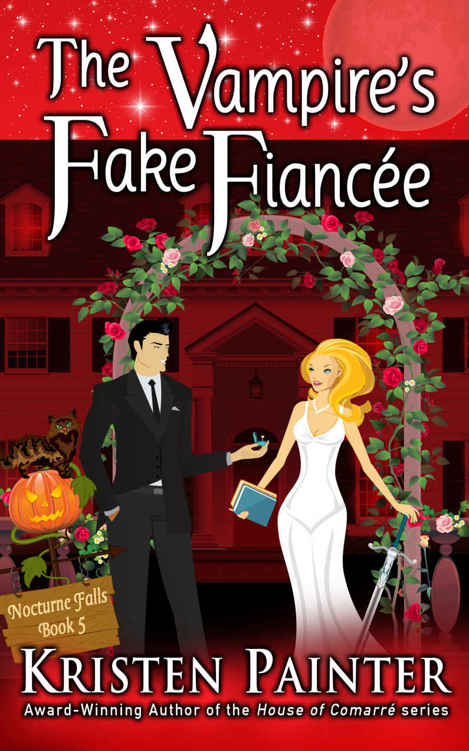 Sebastian Ellingham isn’t known for being a happy vampire. And when his long estranged wife comes to town expecting to pick up where they left off, things take a sharp turn toward cranky. Sure he’s been protecting her for centuries, but her assumption that he’s still available (he is) rankles.

His answer is to hire a woman to play his fiancée. The lucky victim is Tessa Blythe, sister of one of the town’s deputies, librarian in need of a job and, oh yes, reluctant Valkyrie. Playing along with Sebastian is all about the end game for her, the position of Dean of Library Studies at the local private academy.

When unexpected sparks fly between them, they agree to mutually deny the attraction. Fate, however, has other plans…

Welcome to Nocturne Falls, the town that celebrates Halloween 365 days a year. The tourists think it's all a show: the vampires, the werewolves, the witches, the occasional gargoyle flying through the sky. But the supernaturals populating the town know better.

Living in Nocturne Falls means being yourself. Fangs, fur, and all.

All rights reserved. No part of this book may be reproduced in any form or by any electronic or mechanical means, including information storage and retrieval systems—except in the case of brief quotations embodied in critical articles or reviews—without permission in writing from the author.

This book is a work of fiction. The characters, events, and places portrayed in this book are products of the author’s imagination and are either fictitious or are used fictitiously. Any similarity to real person, living or dead, is purely coincidental and not intended by the author.

Want to know when Kristen’s next book is coming out? Join her mailing list for release news, fun giveaways, insider scoop and more!

For all those readers who asked when Sebastian was getting his book.

“A hundred thousand dollars to upgrade the video system to high-definition? I think not.” Sebastian snorted as he crossed off yet another line item.

The proposed operational budget for the new wedding chapel was ridiculous. Sebastian shook his head as he looked at the bottom line for a third time. There was no way he was approving a second budget of more than half a million dollars so the lovesick could marry in a Halloween theme of their choice. Especially not after he’d already approved the first budget to get the place up and running.

That was if his playboy brother stayed in town long enough to actually have a conversation. He seemed to spend more time in Las Vegas than he did in Nocturne Falls these days. And if Julian thought he was going to get his usual salary when he wasn’t putting in his usual hours, well, that was another thing they’d need to discuss. Sebastian was not about to pick up his brother’s slack playing the Vampire On Duty for the tourists.

Thankfully, one of the other vampires in town, Greyson Garrett, had been happy to fill in. Like most vampires, he was well off enough that he didn’t need to work. Unlike most vampires, he had his own sort of magic that allowed him to daywalk like all of the Ellinghams, meaning he could fill in whatever shifts necessary. Sebastian suspected the secret was an old Roma spell from Greyson’s past. The Romani were a people with their own magic, Sebastian knew that much. He also knew Greyson Garrett wasn’t the man’s real name, but many vampires changed their names as time went on for various reasons. None of which Sebastian cared about. The man was a hard worker and readily available. Unlike Julian.

Sebastian ran his tongue over his fangs and went back to the budget, picking out another of the line items. Nearly forty thousand alone for décor in a fourth themed room. What kind of theme was Newly Wed and Nearly Dead anyway?

Julian had clearly been swayed by Delaney and Corette on this, but Sebastian wasn’t about to let his youngest brother spend like a drunken sailor because of the women in their family and their cockamamie ideas about this new venture.

“Hmph.” He crossed out the onsite photographer. There were plenty in town. If people wanted pictures of this nonsense, they could hire one of those. No need to keep one on staff.

The door to his study flew open. “Sir—”

Sebastian held up a hand. “Greaves, I asked not to be disturbed.”

“I know, sir, but this is important.”

With some concern, Sebastian set his pencil down and gave his rook his full attention. The man wasn’t prone to hyperbole, so if Greaves said it was important, it must be. “What is it?”

The man paled and swallowed. “I was in town getting groceries and I stopped by the pub for a pint—”

“You know I don’t care about that. How you spend your time is your business.”

“I know that, but while I was in the pub, I…ran into someone.”

“And?” Sebastian frowned. He wanted this budget finished today. And he was not one for dramatics. “Get on with it, man.”

The rook’s lip curled and his eyes took on the muddy haze of disgust. He cleared his throat. “Evangeline is in town.”

Her name was enough to throw a switch inside Sebastian. Everything in him went numb, iced down by a chill that went soul-deep. The wound inside him, the one he liked to pretend had healed, throbbed anew, and then the promise he’d made—the promise that had bound him to the woman like a ball and chain—rang in his ears. He blinked and found his voice. “You must be mistaken.”

He’d tried to keep tabs on her, but there had been long stretches, years at a time on occasion, when he’d had no idea where she was or if she was all right. Every once in a while, she contacted him. Mostly when she needed money.

Blast it,
only
when she needed money. But these days, providing for her was the only real means he had of keeping the promise he’d made.

“She looks a little different. Changed her hair.”

Sebastian nodded vaguely. Her face filled his memories, causing his heart to sting with emotions. “Still beautiful, I assume.”

He gave the pain a moment before pushing it aside. Of course she’d still be beautiful. She was a vampire the same as he was, their looks almost entirely frozen in time. And she’d always been breathtakingly lovely, even as a human. At least on the outside. “What did she want? Money? I’m sure she’s down to her last penny again. And most likely she wants cash. It’ll be morning before I can access the kind of funds she—”

“No, sir. At least not that she mentioned. All she said was that she wanted to speak to you.”

Sebastian stiffened and looked past Greaves into the hall behind him. “Did you bring her back here?”

“No, of course not.” Greaves adjusted his collar. “I told her to stay put and I’d be back with an answer shortly.”

Sebastian eyed his rook. In their nearly four hundred years together, the man had been a stalwart companion. Trustworthy. Willing to sacrifice. Never duplicitous. A keeper of secrets. All the qualities Sebastian himself possessed. “What answer?”

“When you’d be willing to meet with her. If you’re willing, that is.”

Sebastian stared at the man. To be face to face with Evangeline again after all this time…a thousand possibilities filled his head, followed by only a few outcomes. “Even if she didn’t bring up money, I’m sure that’s what this is about. Just find out how much she needs this time and I’ll take care of it. I don’t need to see her face to face to fill her accounts.”

“I really don’t think that’s what this is about. She wouldn’t need to see you in person if she was just running low.”

Greaves had a point. Was it possible something in Evangeline had changed in these last centuries? “Then what
do
you think she wants? As best as you can tell.”

Greaves pondered the question. “My guess is she wants to apologize.”

“Evangeline? Apologize? How much did you have to drink, old man?”

“I know, it doesn’t seem like her, but she was different. Almost…contrite. I think you should at least see what she wants.”

“Damn it.” Sebastian shook his head. “Fine. I’ll meet with her. But on my terms.”

He hated the hold she had over him and yet felt powerless to do anything but respond exactly as she’d probably guessed he would. No matter the responsibility he still felt toward her, he could not let her have the upper hand. Not this time.

If he did, he would be completely destroyed. “Go back to the pub. Get a number for her. Or find out where she’s staying. Tell her I’ll contact her when I’m ready to talk and we’ll meet where I want to meet. If she wants to see me, it’s going to happen how I want it to.”

Greaves seemed to puff up a bit. “Very good, sir.” He left to deliver Sebastian’s message.

Sebastian put a hand to his chest as he leaned back into his chair. If his heart could beat, he felt sure it would be pounding. He closed the file before him. The project budget could wait.

He had a lot to think about. A lot of feelings to sort. Scenarios to play out. A course of action to decide upon. A promise to keep.

After all, it wasn’t every day your estranged wife came back to town and wanted to talk.

Tessa Blythe reluctantly put her new kitten, Duncan, down on the floor so she could grab the ringing phone. He scampered off, undoubtedly in search of another roll of toilet paper to shred or catnip toy to disembowel. The little monster was a terror. Cute enough to melt butter, but horribly behaved. She was utterly and completely in love with tiny tabby kitten. “Hello?”

“Hi, Jenna. What’s new?” Jenna was a sheriff’s deputy in a silly little town that celebrated Halloween three hundred and sixty-five days a year. Sounded like a recipe for disaster to Tessa. “You’re not calling to tell me you got stabbed by a criminal, are you? Or bitten by a zombie or whatever unfortunate element roams the streets there? Oh, please tell me you didn’t have to kill someone in self-defense.”