Read The Vine of Desire Online

The Vine of Desire 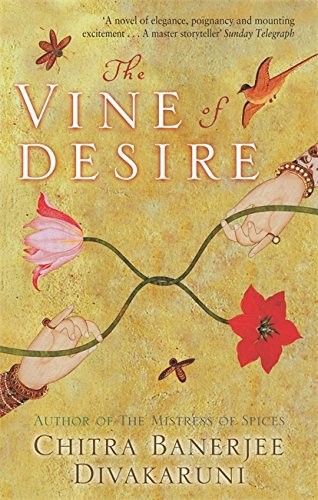 “Divakaruni is a brilliant storyteller, illuminating the depths of need and the glitter of hope in the push-pull of growth and self-restraint…. Grab
The Vine of Desire.
Divakaruni is a transplanted cultural treasure.”

“As gracefully structured as a piece of chamber music, with its interplay of themes and voices, ensemble and solo, working their way toward a final resolving chord…. If you find yourself counting the pages left in the book, it’s likely to be because you wish there were many, many more.”

“Among contemporary writers from India, Chitra Banerjee Divakaruni fills a space all her own…. Her fiction draws a line straight to the heart…. With
The Vine of Desire
, she proves once again that she’s an expressive interpreter of the immigrant experience.”

“Reading Divakaruni is a pleasure. She paints worlds of complex characters and cultures with an absorbing story line and beautiful language that reads like poetry.”

“Dazzling and powerful…. Warm-hearted…. Divakaruni’s descriptions, as always, possess a fine lyrical beauty…. Readers … will have much to feast on.”

“Moving, passionate…. Engrossing…. A beautiful, imperfect journey, much like life itself, and one well worth taking.”

“[An] exquisitely rendered tale of passion, jealousy, and redemption…. Divakaruni combines a gift for absorbing narrative with the artistry of a painter. Her lyrical descriptions of the characters’ inner and outer worlds bring a rich emotional chiaroscuro to an uplifting story.”

“Vivid and lyrical language…. Divakaruni has always written well about the immigrant experience…. [She] draws a compelling contrast between the selflessness required of women in India and the sometimes bewildering freedoms offered in their adopted land.”

“A potent, emotional book delivered by a writer who knows when to step back and take in the poetry.”

“Compelling…. Divakaruni writes prose that is lush. … [She] excels at depicting the nuances of the immigrant experience.”

Chitra Banerjee Divakaruni is the bestselling author of the novels
Sister of My Heart
and
The Mistress of Spices;
the story collections
The Unknown Errors of Our Lives
and
Arranged Marriage
, which received several awards, including the American Book Award; and four collections of prize-winning poetry. Her work has appeared in
The New Yorker, The Atlantic Monthly, Ms., Zoetrope, Good Housekeeping, O: The Oprah Magazine, The Best American Short Stories 1999
, and
The New York Times.
Born in India, Divakaruni lives near Houston.

For further information about Chitra Banerjee Divakaruni, visit her Web site at
www.chitradivakaruni.com
.

The Unknown Errors of Our Lives

Sister of My Heart

The Mistress of Spices

once more for you:

Again the day, again the night
Dawn and dusk, winter, spring.
In the play of time, life ebbs away—
Only desire remains

Again birth, again death
Again the dark journey through the womb
In this world of changes, nothing holds fast
Except the coiled vine of desire

And what did you want?
To call myself beloved, to feel myself
beloved on the earth.

Eros is strength abandoning itself to something elusive, something that stings.

—
The Marriage of Cadmus and Harmony,
Robert Calasso

In the beginning was pain.

Or perhaps it was the end that was suffused with pain, its distinctive indigo tint. Color of old bruises, color of broken pottery, of crumpled maps in evening light. But, no, not like them, ultimately. For although men have tried for thousands of years to find the right simile—and women, too—ultimately pain is only like itself.

This, too: it is hard to tell which is the beginning, and which the end. Particularly when it is one’s own story, when its segments loop around, repeating themselves randomly, like a piece of computer code gone wrong.

The woman did not think any of this, lying strapped inside the ambulance as it jolted its keening way to the hospital. She was focusing on the boy, the way he clung to the wet-silk walls of her womb. They rippled like the muscles of an angry snake, trying to shake him off. He curled himself inward, tight as a peach pit, hoping for invisibility. She hoped for him, too. But there is no fooling the flesh that formed you. The nurses were
rushing them down white neon corridors to the double doors marked Emergency. They stretched her across the operating table. Hieroglyphs of blood on the paper-white sheets; she didn’t know how to read them. The overhead lights were eyes, gigantic, insectile. Her womb heaved. The placid waters that had rocked the boy all these months had become a whirlpool. They spun him down toward the narrow passage that he knew to be death—yes, even the unborn know what death is. For a moment she felt his terror, became it. The crimson and black pulsing in his eyes. The taste in his mouth, sour, amniotic. Later she would think of it as the taste of failure. Hers. She heard someone scream. A metallic, spine-raking sound. Why, it was her! Inside her, she felt him scream back. Her echo, her shadow, her hope for eternity. Her golden child, in whom she had thought to bury all the errors of her past.

An immense force was tearing him from her now, past the lumped and bloody flesh in the doctor’s hand, outward, upward. She followed, shaking off the ungainly body that he had shared, briefly, with her. They shot into space with such speed that it seemed she would explode. He was crying.
Keep me with you.
She was crying, too.
Don’t you think I want to? More than anything else in the world? Don’t you know I’d give up everything in my life, right now, if I could, for that? But
except the night clouds skimming across the moon’s tattooed face, no one heard them. Except the small brown owls, birds of witness and reclamation. The clouds did not falter. Huddled into tree knots, the owls did not lift their heads to watch the bright specks hurtling upward, dual shooting stars, reversed. They had heard such wailing many times, seen many such lights disappear. Except for those to whom it is happening, death is hardly a unique occurrence.

Shimmering and gaseous, he spun into space, and she in his
wake, so light that she wondered if perhaps she no longer existed. He was looking over her shoulder, a gaze of such sorrow that she, too, turned to look. She saw the scalloped walls of the old Victorians on the hills of the city, and knew its name.
San Francisco
, she whispered, the syllables at once familiar and amazing in her mouth, and the lights in the tall triangular tower downtown flickered acknowledgment. Mist drifted, fragile as promises, over the cypresses that lined the ocean cliffs. Southward the bay gleamed like a woman’s curved arm. Studded with ruby taillights, the bridges were her bracelets. Up at Point Reyes, pewter waves etched the empty shore. A cormorant rose with a black cry, a lumbering flap of its wings. Out to the west, moonlight, leaping off the backs of porpoises, flashed an enigmatic code.

It filled her with rage. That he should be given a glimpse of such beauty only to have it snatched away!

But now her eyes were caught by the cities of the south bay. San Jose, Sunnyvale, Milpitas, their smoky, stubborn sprawl. In the low apartment houses by the freeways, pinpricks of yellow lights were going out one by one as people readied themselves for bed. One of those windows had belonged to her. To her and a man—but who was he? She couldn’t quite recall. Only that he’d been significant. She felt a pull as she sensed this, downward, into the tangled, unfinished life she’d left with him. Her imperfect life, her caught-in-the-body life, with its ferocious, zigzag pulse.

And with that thought she finds herself falling. Fast, faster. She tries to stop herself, to reach into the vast hushed swirling of light that hangs above her head. Where has her son gone?
Where?
No use. She plummets through space, solid as a spent bullet, rapid as rage. Galaxies blur past her. Black holes. She
sinks into emptiness, that hollow metal cube in the center of her being. Clouds now, the calm, unwrinkled peaks of mountains, the lacy glimmer where ocean licks at earth. The brown glow of the city, its brave smells—gasoline and tired sweat—settling around her like arms. She wants to push them away. All of them.

Looking for Laura by Judith Arnold
Gambling on a Secret by Ellwood, Sara Walter
Stone Cold: A Bad Boy Romance by Hart, Michelle
A Little Bit Naughty by Farrah Rochon
Tasting Notes by Cate Ashwood
Passion by Kailin Gow
Just Another Lady (Xcite Romance) by Friday, Penelope
Starring Sally J. Freedman as Herself by Judy Blume
Dance by the Light of the Moon by Milo James Fowler
Journey to Empowerment by Maria D. Dowd
Our partner