Read The Virtues of Oxygen Online

The Virtues of Oxygen 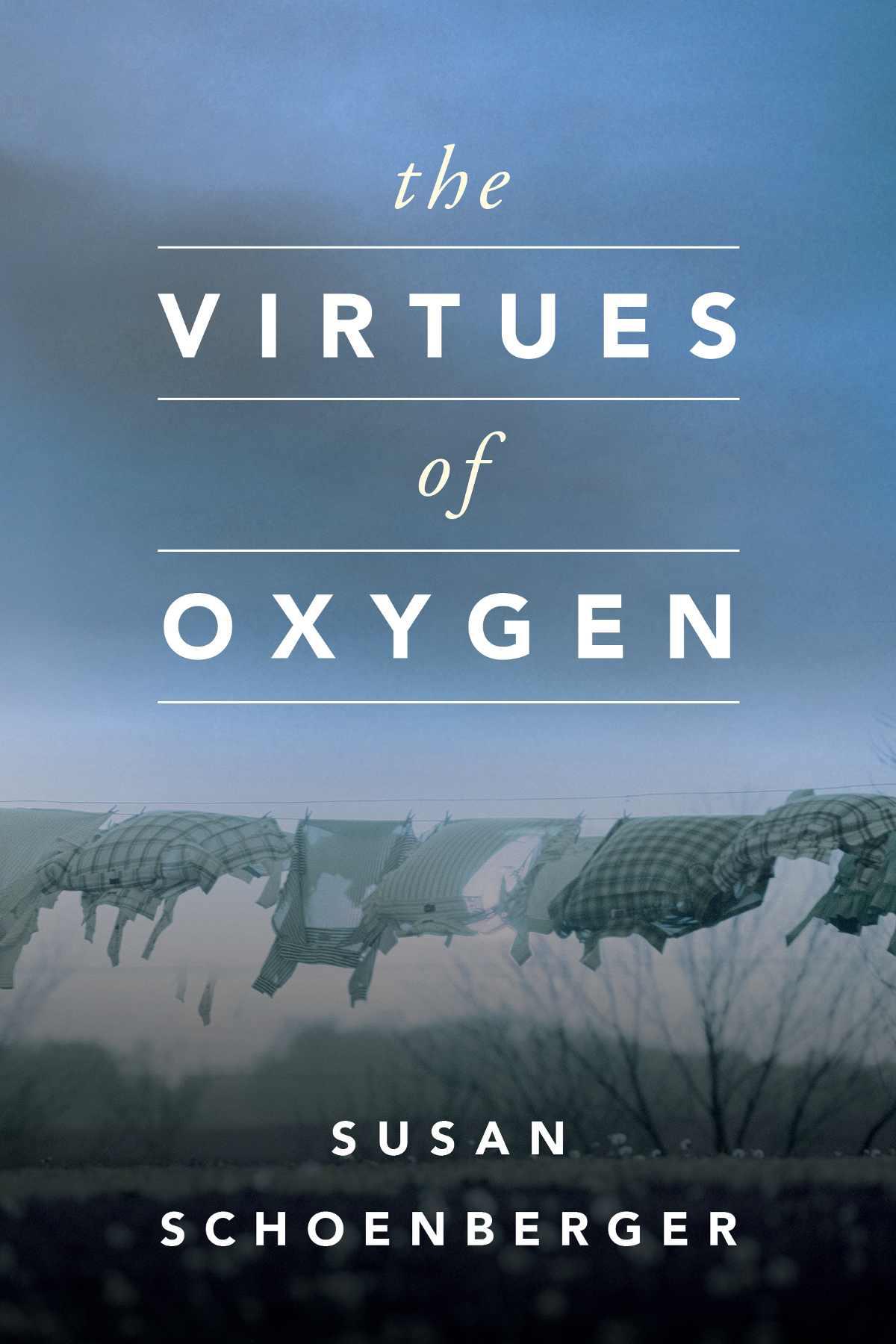 This is a work of fiction. Names, characters, organizations, places, events,
and incidents are either products of the author’s imagination or are used fictitiously.

No part of this work may be reproduced, or stored in a retrieval system, or transmitted in any form or by any means, electronic, mechanical, photocopying, recording, or otherwise without written permission of the publisher.

Amazon, the Amazon logo, and Lake Union are trademarks of
Amazon.com
, Inc., or its affiliates.

—Stiffness in my legs as I balanced on the second fence rail to feed the
chickens.

—Eyelids so heavy they pulled me into
darkness.

I’ve been told that my sister, Darlene, found me on the ground and carried me into the house. My cheek must have been mashed against a button on her overalls, because I remember waking up and rubbing the welt on my face when she put me down on the davenport, but then my arm felt so tired I had to let it drop. That sensation—of strength draining out of me like water from a bathtub—has stayed with me all these years. The virus set in quickly, shutting down limbs that had just that morning propelled me into the spiraling oak in the backyard, the one I wasn’t allowed
to climb.

“You’ll break your neck up there,” my mother had said, little knowing that my arms and legs needed a challenge before they would be permanently decommissioned. She had walked back into the house yelling, “Why the Lord saddled me with two tomboys I’ll ne
ver know.”

Darlene was ten, four years older than me and therefore four times as smart, and so thoroughly a tomboy that she was sometimes mistaken for an actual boy. She refused to wear dresses except to church and she stomped around the farm in a pair of Daddy’s old work boots. I admired everything about Darlene—how she had chopped her hair into a bob with a pair of rusty scissors in the shed; how she shrugged whenever my mother told her that boys didn’t find dirty fingernails attractive; how she read extensively about airplanes and engineering and could take our old radio apart and put it back together. Daddy never seemed to mind her boyish ways, but my mother fretted about them endlessly. Darlene just had her own view of
the world.

“Don’t you feel like you could reach out and grab one?” Darlene said one summer night while we were lying on our backs on the hillside behind the farmhouse looking at the stars. She stretched her arms toward the sky and made little pincers with her thumb and forefinger around a star, so I did
the same.

“I’m going to fly airplanes when I grow up,” she said. “But I guess I’ll come back and sleep here when I’m done for
the day.”

“You promise?” It worried me to think about Darlene zooming around in the sky without the rest of us, dodging the stars, which she wouldn’t be able to see in th
e daytime.

“I promise, Vivi. Now let’s go inside before Mom has a con
niption.”

I remember Darlene crying before they took me to the hospital, which more than anything made me realize I was truly sick. The word “polio” had been mentioned in my presence during periodic quarantines, but I don’t remember if I knew what it meant. I only knew that I felt terrible—so terrible that I couldn’t move, couldn’t speak, couldn’t cry. I didn’t have the strength to worry about what was happening to me. I just wanted to escape from the pain in my back and my head; sleep seemed like the only
release.

When I woke up in the hospital, my parents were hovering over me with looks of pure anguish on their faces. They told me the doctors were sending us to another hospital so that I could get better, and patted my hands and placed clammy palms on my burning forehead. I was already having trouble breathing. I remember hearing my mother pulling air audibly into her lungs as if she could compensate for my s
truggling.

I don’t remember the ride to the polio ward in Syracuse, but I remember the moment they placed me into the iron lung, closing it around my slight body and fixing the rubber collar around my neck so that it made a seal. I couldn’t see most of the machine, but I could feel the instant relief as I gave over the newly difficult work of breathing to a device much more capable than I was. It seemed miraculous. Weeks later—after we had slipped into a bizarre routine of daily visits and strange forms of physical therapy—my mother sat down next to my iron lung and put her hands on both of
my cheeks.

“Vivian, sweetheart,” my mother said, her eyes red from crying. “We have something very hard to
tell you.”

“What?” I said. In those weeks after I fell ill, my mother often looked like she had been crying, so I wasn’t all that
concerned.

“It’s Darlene,” she said, choking over my sister’s name. “She didn’t
make it.”

“But you said she could come to see me when I wa
s better.”

“No, Vivian,” my mother said. “She had polio like you, except she’s gone now. Gone t
o heaven.”

My mother still had her hands on my cheeks. My father stood on the other side of me, one hand on the top of my head, as if they could somehow cushion the last part of me that still functioned on its own. I don’t know that I have ever felt worse, or more sorry for myself, than on
that day.

Darlene, I later learned, contracted polio the day after I did. I could never ask my parents to give me the details of her illness, because I knew they couldn’t relive them in the telling. They needed me to focus on surviving, because losing both of their children was inconceivable; even at six I knew that. I had to preserve whatever reason for living they had managed
to retain.

And so I fought to resume the life I once led—albeit without Darlene. I couldn’t wait to ride a bike, go on picnics, swim in the lake near our house, and catch fireflies again in the midsummer dusk. It was not all that uncommon for children with polio to regain their ability to breathe and move just before Jonas Salk’s vaccine became widely available in the mid-1950s. Some were in wheelchairs, others in braces, but they still moved independently through the world. I had no doubt I would be one
of them.

My favorite visitor—besides my parents—was Dr. Mitchell. He was tall, and young for a doctor, and had Clark Gable hair, and he always brought me a lollipop when he came t
o see me.

“Hiya, peaches,” Dr. Mitchell said one day after my parents left for their lunch in the hospital cafeteria. He took the lollipop, which was cherry, and smashed it into pieces with a metal instrument on the rolling cart next to my lung. I couldn’t manage a lollipop by myself, but I could suck on small pieces as long as someone was there to make sure I didn’t choke. He placed a bit of the candy on
my tongue.

“Are we going outside?” I asked him. The staff sometimes took groups of us out to the patio in nice weather, wheeling our bulky machines on their gurneys through the hospital’s w
ide doors.

“It’s raining, sweetheart,” he said. “We can’t take you out there today. You’d rust like the
Tin Man.”

I laughed and stuck out my tongue so that he could place another small piece of the lolli
pop on it.

“But I do have some news for you,” he said. “We’re going to give your lungs a chance to start working on their own again. Wouldn’t you like to get out of this thing once in
a while?”

I thought about it for a moment. I hated being trapped inside all the time, but whenever the nurses opened the lung to change my clothes or clean me or adjust the various tubes that handled bodily functions I no longer even thought about, I would battle for every breath. The muscles that once expanded and contracted without a conscious thought had atrophied. It was like trying to breathe u
nderwater.

Dr. Mitchell had been writing on my chart, but he looked back toward me, his face the picture of
sincerity.

“We won’t let anything bad happen to you, Vivian,” he said. “I
promise.”

When Dr. Mitchell left, I remember wondering how anyone could promise such a thing. I understood from listening to my parents that no one even knew how polio was transmitted or why some people died from it while others were left relatively unscathed. Only years later was it clear that polio could travel from person to person through infected food or water, and that most people exposed to it didn’t even show symptoms. Darlene and I somehow ended up in the small group for whom the virus destroyed motor neurons, causing paralysis and respirator
y failure.

I could turn my head and see a long row of iron lungs just like my own in the special ward created for them, and it occurred to me that back in olden times I would have died instead of being placed inside a machine that did my breathing for me. Just as suddenly I realized that nothing had changed inside my brain. Even though I couldn’t use my body, I could think and speak as clearly as I had before, and I wondered for the first time what I was missing in fi
rst grade.

A few days later I had my first session of independent breathing. The idea was to coax my muscles into remembering how to function and to increase the time I could spend without the lung breathing for me. Some patients learned to breathe on their own during the day and only had to sleep in the lung at night when they couldn’t actively control their muscles. If I could breathe on my own for even short stretches of time, my parents might be able to take me home. Dr. Mitchell and a staff of nurses stood near my head and released the collar as an orderly unlocked the lung and slid the metal ca
sing down.

The first minute or so wasn’t difficult, because I had done it before—I could hold my breath at least that long—but beyond that I strained with my neck muscles to pull air into my mouth. I recall seeing the doctor’s look of concern after I squeezed my eyes shut—the signal that I couldn’t take much more. I sighed with relief when the lung began pumping again. In the weeks following I was able to breathe for up to five minutes on my own, mostly through sheer force of will, but I couldn’t seem to get beyond that, and I began to dread those sessions, even if Dr. Mitchell came to ch
eer me on.

He later sat down with me and told me that the virus had destroyed my ability to breathe independently and that my condition was irre
versible.

“So I won’t get any better?” I asked him, truly surprised because of all the encouragement and attention I had received in the
hospital.

Dr. Mitchell put his hand on the top of my head. “Your body won’t get better,” he said. I wanted his eyes to be bright with tears, the way they would have shown such a scene in the movies, but he was only solemn and subdued. “But that doesn’t mean you can’t have a good and produc
tive life.